Lately, there's been some tribute to Mordecai Richter, since it's the 10th anniversary since his death. For those of you who don't know who the man is, he was a Canadian Jewish author with a sarcastic bent. His honest journalistic essays often led to outright criticisms of his views, with violent threats, which Mordecai refused to back down on. He was often seen with his trademark cigar and drinking from a glass. Aislin was a big fan of the man, and caricatured him often. 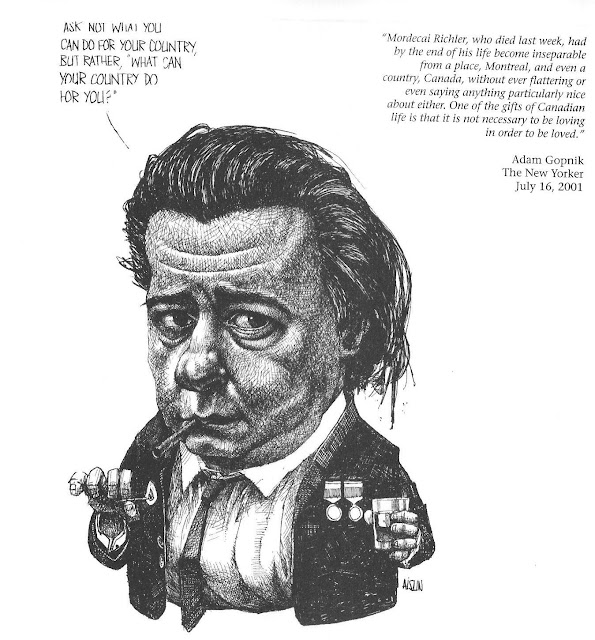 Personally, I never quite got the appeal of the man's works. I only watched the first five minutes of The Apprenticeship of Duddy Kravitz before I got bored and stopped. I think that unwatched movie is still alive somewhere buried under the dozens of VCR tapes that still haven't been converted to DVD yet. (Even though Blu-Ray is now the new medium of choice, I'm still holding on to my old preferences) Apart from the recent adaption of Barney's Version, most of his fiction haven't been released on home video. (DVD / Blu-Ray if you want to get technical about it)

As far as I'm concerned, there's only one work of his that I ever fully embraced, and that was Jacob Two-Two and the Dinosaur.

I'd read the first book, Jacob Two-Two and the Hooded Fang, but wasn't aware that it was supposed to be funny. In it, the titular character was the youngest of five children and was overshadowed by his older siblings, the eldest who took the monkier of a Superhero team known as Child Power, which basically amounted to them standing around in capes. Upon trying to take some responsibility for himself to prove he wasn't too young to do anything (he couldn't butter toast properly) Jacob was arrested for the crime of saying everything twice, because he was the middle child, and his family never noticed anything he said the first time around. Outside the home however, grocers were puzzled by his odd quirk, and couldn't figure out whether he was being disrespectful or not.

It might've been because I read the second book later when I had a better grasp on humour, but I think it's because its a funnier story. In the first, Jacob is thrust into a Children's Prison for reasons that're beyond his understanding or control. In the sequel, he starts out with just as little power as he ever did before, and is still stuck with his mantra of repeating everything twice, and his focus on the number two. Instead of being two times two plus two years old, he's now two times two times two years old. (I imagine for the 7th year, he's was two times two plus two plus half of two years old) However, Jacob now has more charge of his own destiny, even as he's being bossed around by his elders. He unwittingly gains the respects of his peers. He makes the decision to raise Dippy the Dinosaur as his pet. He decides to bring Dippy to British Colombia (B.C.) in the hopes that Dippy'll find a mate there, since it's in the "past".

That, and dinosaurs are inherently interesting. Especially anthropomorphic talking dinosaurs. Who likes eating pizza. Who grows to gargantuan lengths after being raised in a shoebox. Who a scientist insists is only a figment of Jacob Two-Two's imagination. Who the Prime Minister wants to kill to prove that he's capable of slaying such creatures like St. George & the Dragon.
In closing, here's the lyrics paying tribute to Mordecai Richter from satrical Canadian singers Bowser & Blue:

The economy was in ruins
The premier wore a frown
"We've got no jobs," the people cried
"And the stadium's falling down!"
Will no one sooth our fevered brows?
Will no one even try?"
"I will do my best,"
replied Brave Sir Mordecai

And off he rode, this dauntless knight
To far off New York City
To say, in reams of matchless prose
That things at home were s***ty.
This article left nothing out
It covered every angle
Of the Franco-Anglo 400-Year-Old
Linguistic wrangle

Sir Peladeau was heard to say
A sneer upon his face
"I do not like Sir Mordecai
He takes up too much space!"
"I do not like the things he said
Nor the way he said it."
Quoth Mordecai: "I know not why
I'm sure he has not read it."

And bravely he stood by his work
A lonely shining star
"Things are not perfect here," he said
"I will not say they are
So let them bay and let them rant
I for one will not recant
They can say the Earth is flat
I know it's not. And that is that."

And sure enough the raging mob
Retreated from their prey
Sir Parizeau he merely sniffed
"'Twas boring, anyway
He doesn't understand our habits
He should stick to Duddy Kravitz
He doesn't seem to comprehend
He needs my boot in his rear end."

"But with all the fuss and bother
In the Quebec nation
I rather doubt," said Mordecai
"There'll be a French translation"

Oh Canada, Oh Quebec
I know not which the worse is
But you know I feel sometimes
Like I wrote the Satanic Verses"

But brave Sir Mordecai, he felt
That he had done his task
"The people bade me help them
And I did what they asked."
And off he rode, back to his home
In the townships of Quebec
A giant of a writer
And a real pain in the neck 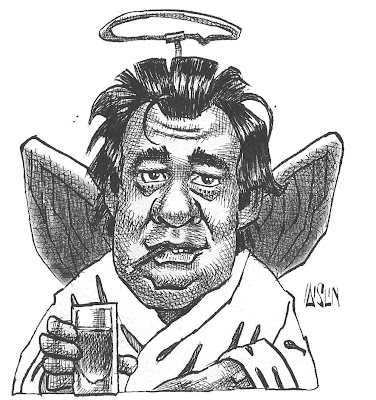