Chances are you first stumbled onto this blog after I posted my parody of Manga Garfield, which used the first two pages of What's Michael? with dialogue from the first Garfield strip.

However, I was disappointed when the very next update of my Garfield Manga wasn't the 2nd one in sequence, but the last one, which threw the whole thing out of whack. The proper reading order should be the 3rd one, then the 2nd. It's been ten months in between waits, and that's a terrible time lag for a correction.

I contacted the administrator to complain, and found out it was just a case of bad luck. They said that the reason they did so was because I submitted so many comics that they had to rotate them out for variety. There's several comics I've submitted that have yet to appear, mostly involving the mailman and roller blinds, and I'm a little embarrassed by some of them now. Right now, I'm focused on creating larger Garfield comics that won't be regulated to being simple 3-panel edits. Let others be satisfied with contributing repetitive remixes - I have higher ambitions.

The only fault is that most of them won't be seen for a long time, since I've outpaced most of the other author's submissions, and the administrators want to give them their chance in the spotlight. The European Nermal one was an exception, since I asked for the webcomic author's permission to use her drawings before submitting. I was surprised at how fast it went up, since it was more recent than my past ones, but the administrators were probably impressed enough at how well it worked that they allowed it to jump the queue prematurely.

Part of the reason it takes so long for some comics to show up depend on whether or not the contributor submit a text script of the parody in question. Otherwise, it slows down the release time if the administrators have to do it themselves. Especially if it's a long one, and there's several comics there that defy description...

Despite my impressive output, there's some comics I'm a little dissatisfied with. In some of my comics, I submitted them prematurely, only to find additional relevant strips later. When I gave my remixed comic of Garfields with halved panels, I neglected to use all of them. Fitting these in would’ve been a challenge, but I could’ve made it work.

There's also a few comics that I worked on, but later decided weren't as great as I thought. Below are my rejected versions of the Nap Attack! and Monster Garfield comics. They're okay, but not that funny, which is why I didn't include them. If I'm going to have myself for competition, I should have something worthy of taking up my valuable space. 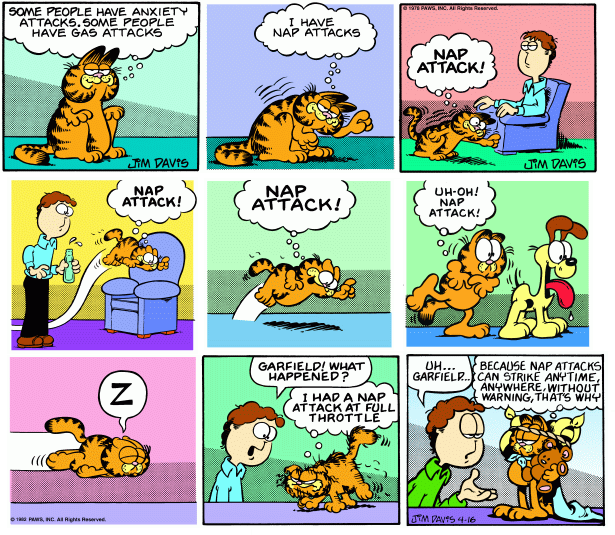 One comic that I definitely didn't contribute was adding to the already tired meme of The World is Constantly Changing. If you've ever seen one, it's taken a life on its own to the point where every time a new one appeared, it spawned at least three more comics with slight variations to the middle line where "Minus" was replaced with anything that sounded even remotely similar. By the time there was a whole week of nothing but the same joke, people were getting sick and tired of it to the point where they no longer felt like coming back anymore. The site might've actually lost a large part of their audience to this. When the administrators were determined to cull the remaining strips so they'd end on a strong finish, they still continued to receive contributions from more people who'd been influenced by the silly concept, each one wanting to put their own spin on the subject. Fortunately, they've learned their lesson and are only going to contribute one "Pudding Pop" strip a month from now on. Even if there are no more (very unlikely), they'll still have enough to keep them satisfied for over two years.

While first working on Jon’s Bad Day, there was originally another Sunday strip involved, but I didn’t include it, because it would’ve interfered with the layout. Just shortly after I sent in my submission, I found another relevant strip that would've perfectly within the strip without disrupting anything. However, despite sending the revised version, it wasn't included. Furthermore, it doesn't look like my earlier version will be replaced with the latest one anytime soon. Let this be a lesson to you - don't submit your work unless you feel you've done absolutely everything you can. Consider this a director's cut version.

Fortunately, my second submission of Garfield’s Birthdays got posted, when I hadn’t included the last two years, so it’s not all that bad. Still wish I’d caught the colour mismatches though.

There were several instances where my comics were slightly edited, but I respect the administrators for doing that. My first comic was much bigger before I learned how to resize my images. The original version of Lean on Me was much more pixelated, but the final version was cleaner. My hockey theme was two layers instead of one, and would've been clever enough had Xkcd not already improved on it. Alternately, my Omaha parody had a certain element removed. See if you can spot the difference. 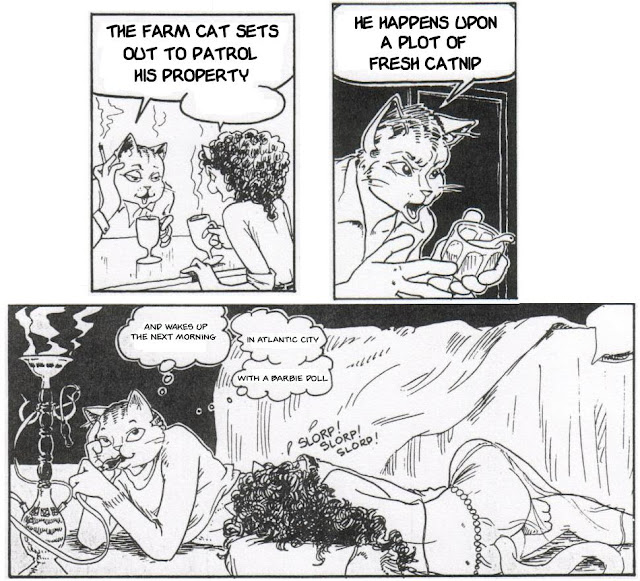 Even more infuriating is not knowing which comic of mine might come up next, since it's all up to chance. My only clue is the number of comics left in the database, and how many are in my name. I can't risk talking about any of my unreleased comics, since that would constitute as a spoiler, and I like my audience to be surprised. As torturous as it is for me waiting for one of my contributions to come up, I'm sated with the knowledge that there are people who're anxiously awaiting my latest masterpiece. Oblique clues such as "homage to a library cat" or "a Weird Al tribute" don't help either. Of course, it's still a roll of the die on whether you get a worthy one, or a subpar admission.

Now, we just need to wait for Manga Nermal to show up. When it does, you'll be kicking yourself for missing the obvious...
Posted by DeBT at 8:50 AM