Evolution of comic characters can be startling if you haven’t grown up with them since their inception. You might’ve seen Harriet and Stanley Parker of The Better Half, but you might be surprised at what they looked like when they were starting out. It can be shocking to see their basic designs before they were molded into what we were familiar with. 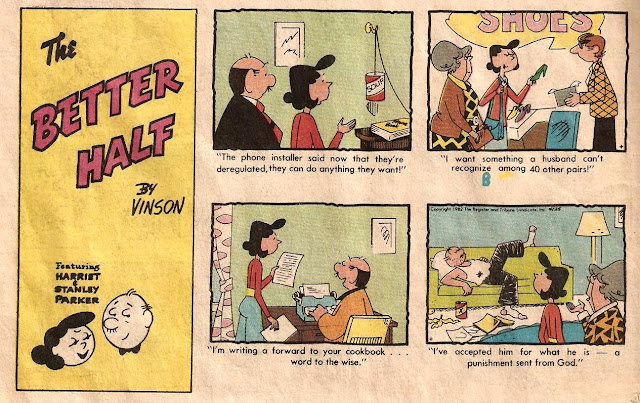 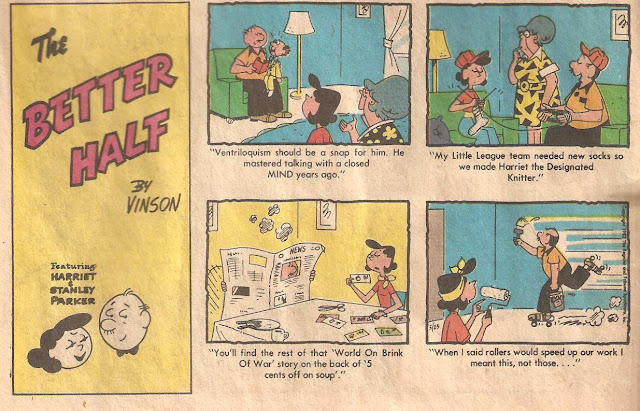 The reason Stanley looks so much thinner in some scans is because they’re from the tail end of Vinnie Vinson’s run. Ever since Bob Barnes created the strip, successors kept close to Stanley’s character design of being slightly paunchy with a thin mustache. Since then, Randy Glasbergen (with the nom de plume of Harris) reduced his mustache to nose hairs, and started adding the pounds until he became the fat slob we’re more accustomed to. 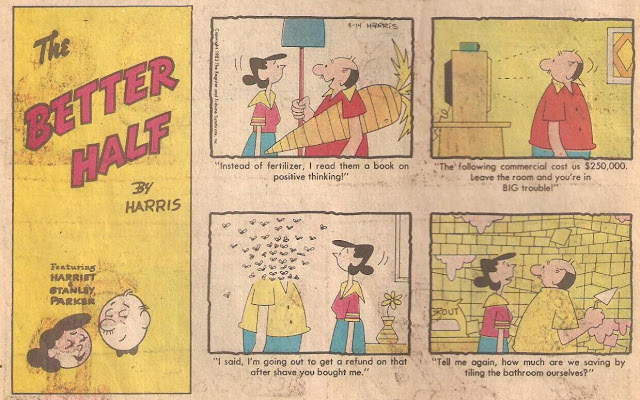 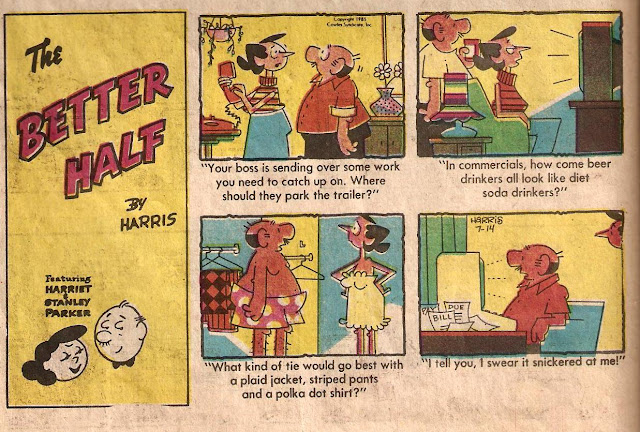 Upon first sight, one would think that they were just a ripoff of the Lockhorns, but a look at their publication history shows that The Better Half debuted eight years before the Lockhorns did. (1956 versus 1968) 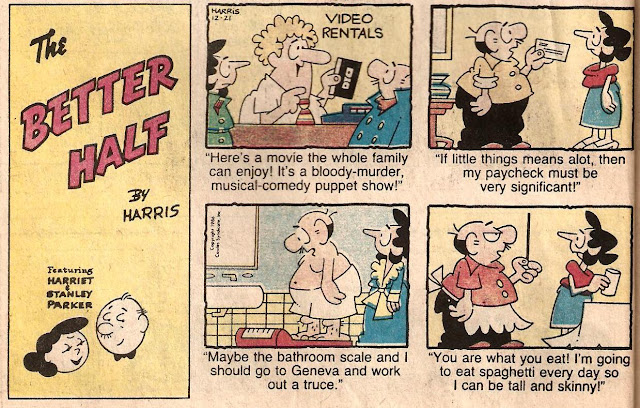 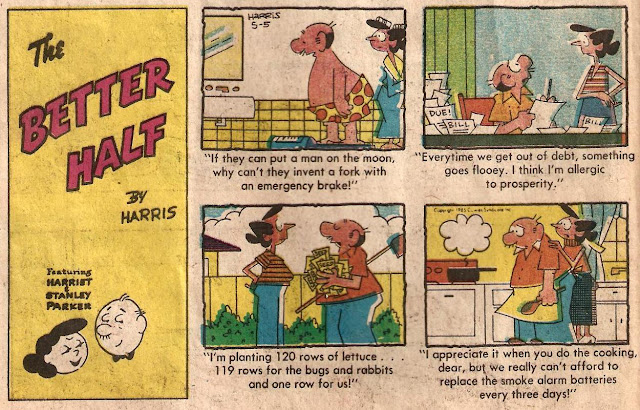 Truth is, its difficult to write objectively about this comic. It was a single-panel strip with very few thematic themes running throughout. There’s only two characters, either one of which has something wry to say. The Sunday strips is really just four (or five) strips in tandem rather than a typical Sunday comic outlook. This is both a bonus and a minus. If one strip falls flat, there's three other strips that can pick up the slack. However, this also means that the reader would lose either one or two strips a week, depending on the Newspaper’s preferences. On the rare cases where there would be a running thread through all the comics in question, these would be few and far between. 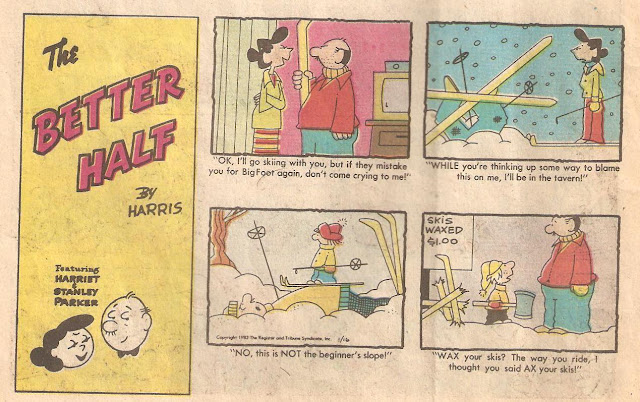 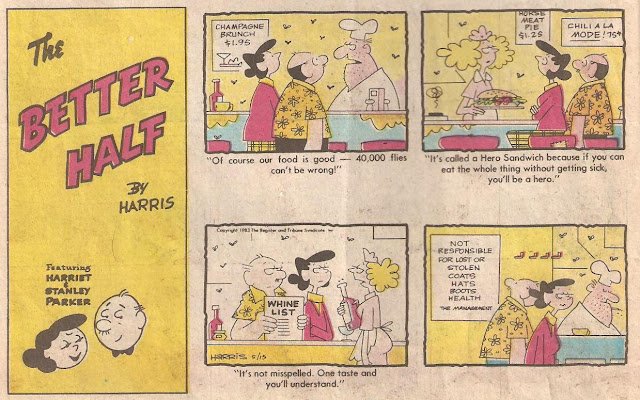 The nicest thing that can be said for this comic is that despite their snarkyness, the couple continues to live together with only mild irritation and frustration. Quite a far cry from the Lockhorns, who’re constantly showing their contempt for each other. It’s harder to show gentle prodding humour than hard-biting comebacks with thinly veiled insults. The latter may account for the Lockhorns’ “popularity”, since it’s in the domain of stand-up comics. 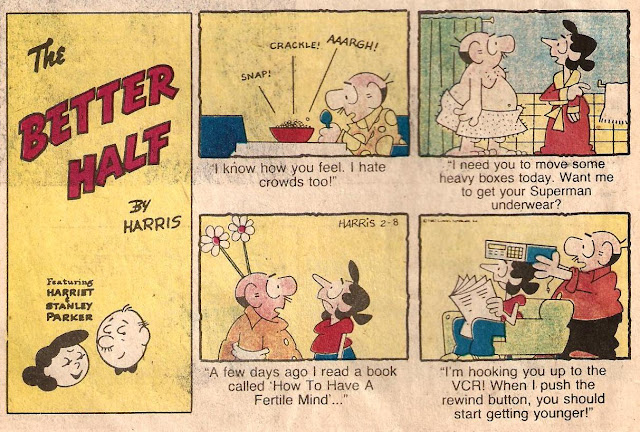 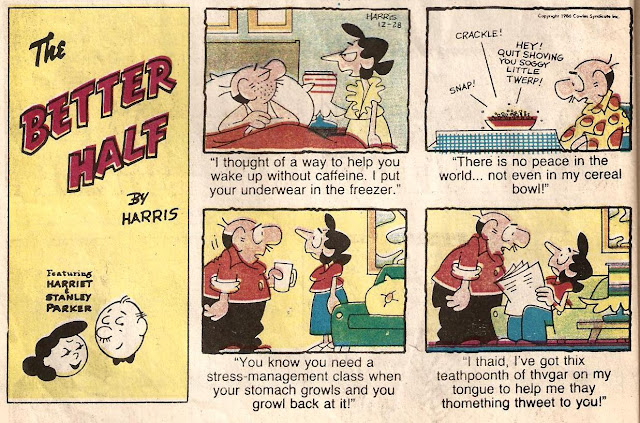 Even so, for all its merits, I can’t imagine there being a potential audience for this comic. It remains rather static in that it only focuses on two characters without even a running conversation between the two of them. (There have been rare in-strip exceptions, but for the most part, they're mostly monologues) In addition, past cartoonists could've plundered old strips for years and updated them with new artwork without anyone noticing. The punchlines are so vanilla that they're hardly memorable. I don’t think any collections have been made of any of this comic’s runs, even though the Lockhorns had some collections. 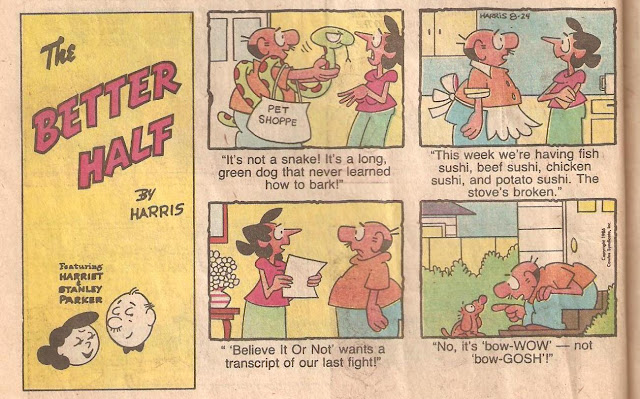