In light of cartoonists coincidentally telling the same joke, I thought it prudent to make a comparision between Tuesday's Brawl in the Family Zelda comic with a sprite comic that told almost the exact same joke.

This kind of unanswered question is second only to unique creatures that only appear once, without their sprite being recoloured. What happens to their species once they've been wiped out? And apart from completists and animal rights activists, does anybody care? 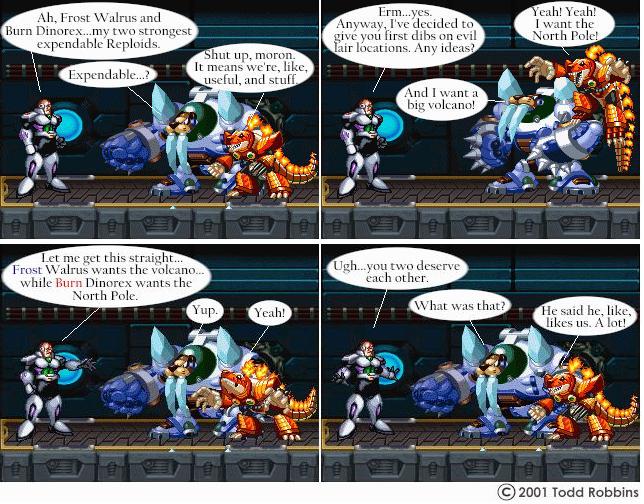 And now for the comic I thought of, which is suitably called: What Do They Do In Those Little Rooms, Anyway? 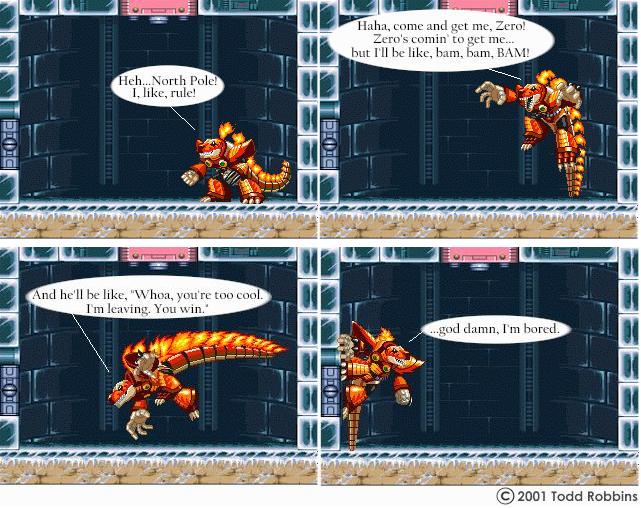 One theory is that they're trying to find a suitable threatening (if cool) pose that'll intimidate whoever walks through those doors. Another is that the bosses are training themselves so they'll be more prepared to face against the Blue Bomber. This would explain the sudden spike in difficulty in later Megaman games.

All scans taken from the defunct webcomic Megaman X: ZeroHour. The site is so diminished that not even Webarchive can find much left in its remains. Your best bet is finding either somebody who saved everything beforehand, or contacting the creator Todd Robbins and asking him yourself. (Until I get permission from the author, you'll have to do some homework first)

At first, I wanted to send these scans to Matthew, artist of Brawl in the Family, but apart from the store, there wasn't any other email address. I didn't feel like using an ordering system to send what would've been regarded a private joke that could've been deleted because of an attachment from an unknown sender. So I decided to post about it and let a wider audience decide for themselves. If there's one thing I like, it's making people laugh, and I don't like the idea of a joke going around unseen.

Philosophical technological question - if a joke is posted via email, and no one sees it, is it still funny?
Posted by DeBT at 9:08 PM