Last month, I posted some Sunday comics that reused their illustrations. At the time, I wanted something that would take my mind off doing random blog updates without too much forethought so I could focus on a group presentation. Ironically enough, there were several comic news announcements that I wanted to comment on, and as a result, April turned out to be one of the busiest months I've ever done.

When it comes to reusing ideas, jokes are the most obvious stolen reference. In some rare cases, two different cartoonists will use the same idea, only executed differently. All storytellers are influenced by other stories in one form or another, and in comics, chances are that two cartoonists will touch upon a similar joke/concept/theme. In fact, it's happened so often its even got its own page.

With all that setup out of the way, here's two different comics that appeared on May 8th 1983: 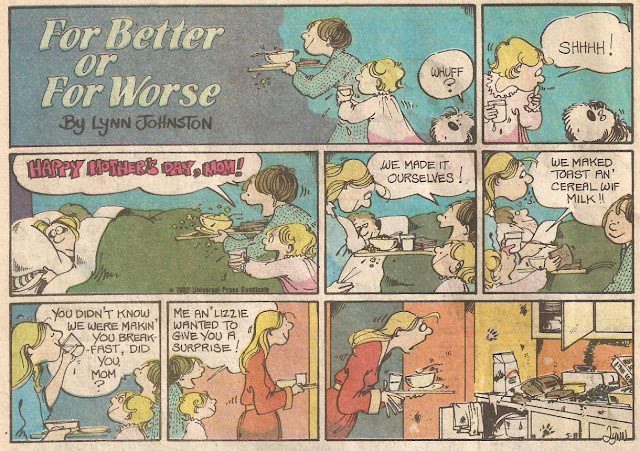 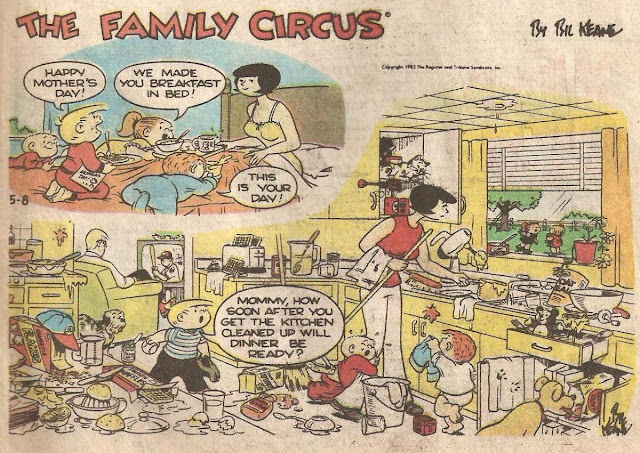 The above mess is reminiscent of how our house looks after we've been moving all of Bubby's stuff out of her apartment. It was a gradual process that took many years so she wouldn't notice anything was missing. In addition, she had two storage lockers in her building basement, full of stuff that "she needed" if chance ever came upon her. This included multiple threads of string from her retired business, hundreds of slightly used paper napkins, as well as dozens of boxes of playing cards. Unless you're planning to be a card shark (where's the red Queen? Find the Queen and win a dollar) or create the largest card castle, chances are you'll only use one deck at a time. We've now got enough matzoh ball boxes to last us a lifetime.

This Depression-age pack-rat mentality is constantly gleamed from multiple comics and movies. It's something I've learned to identify with, and will use every inch of anything I use. Like the grumbling old caveman in the Far Side comic who complained about "throwing away the tail", since in their day, they used every single part of a mammoth. I want to make the most of what little I've got. When cracking an egg, I'll keep the shells in the sink awhile longer so the excess yolk will settle at the bottom, then mix the collected fluid into the bowl. I use a similar tactic for collecting little bits of food left at the bottom of food or juice containers by leaving them upside down for five minutes. Every little bit counts!

I'm even worse with eating bought food, even if I don't like how it tastes. No point in letting it go to waste - I paid good money for it (cheap!) and if I suffer food poisoning, that's the risk I take. And maybe if I eat enough of the lousy stuff, I might get used to it. This is why I'm always reluctant to try out new things in restaurants - I worry that I won't like it compared to what I'm used to, and even worse, I paid for something I can't eat. I'm amazed that people can so casually try out new foods without worrying about cost or taste.

I never thought that there were actual people who didn't learn that pack-rat mentality from reading stories about it, but were the cause of such stories. It makes me wonder what values today's videogame nation will relentlessly cling onto way past its intended use? Would future generations be influenced by their stories in the same way I was influenced by Maus & Uncle Scrooge? And what possible lessons could they pass on? 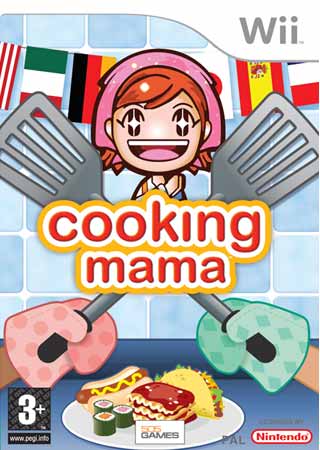