My Son the Teenager 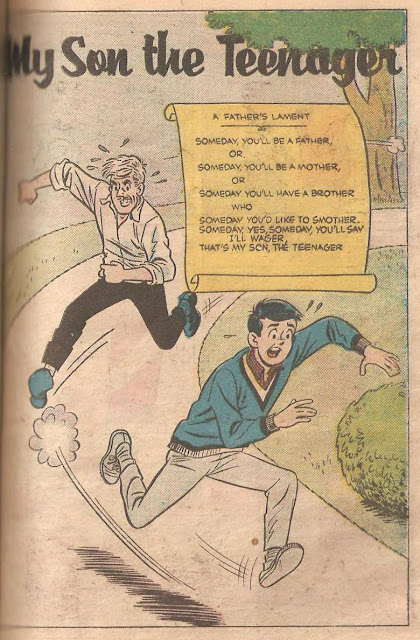 Ever since the list of 25 Teen comics that tried to topple Archie from their throne, I'd been wanting to do a post about the 18th entry, Seymour My Son. When I first read it, it was the longest comic story I’d ever read without any chapter breaks. It was also my first foray into seeing an unreliable narrator, so I had to constantly rethink what was being said versus what was actually happening. To make things more confusing, sometimes the narrator would tell the truth, so I was never entirely sure where to stand. It was a good exercise in reading between the lines. 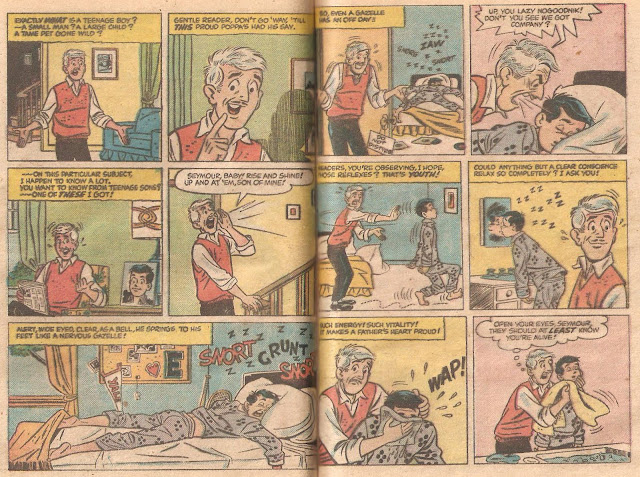 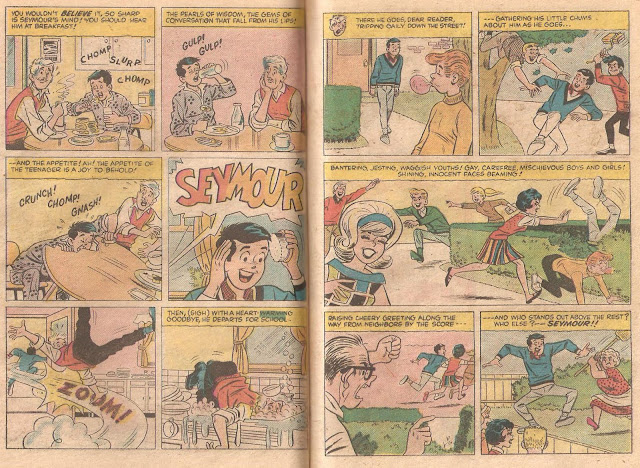 It wouldn't be an Archie ripoff without a few familiar character archetypes. Here's Mr. Weatherbee's stand-in: 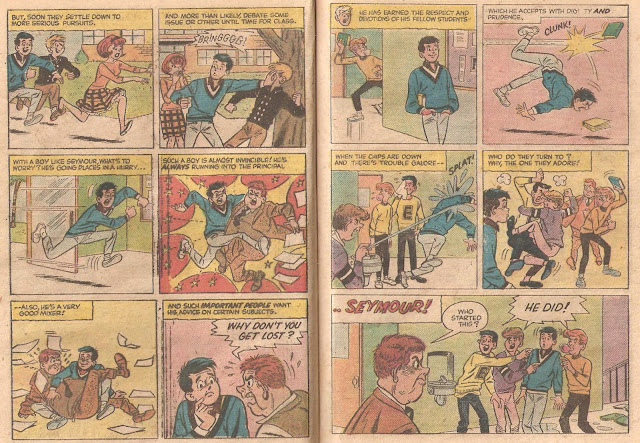 Some real fair-weather friends he's got there. Pay attention to that bubblegum-popper - he'll be showing up later on. 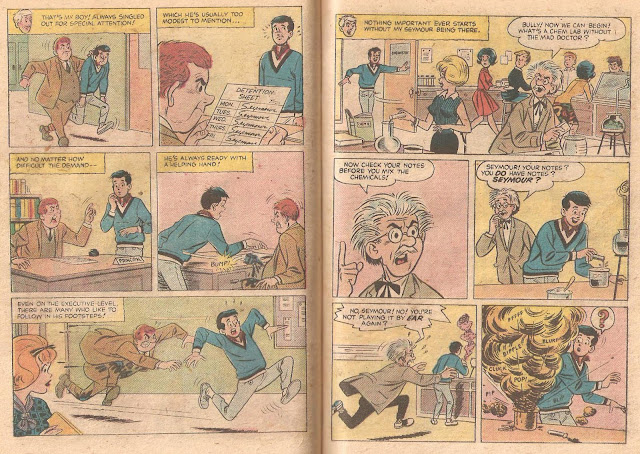 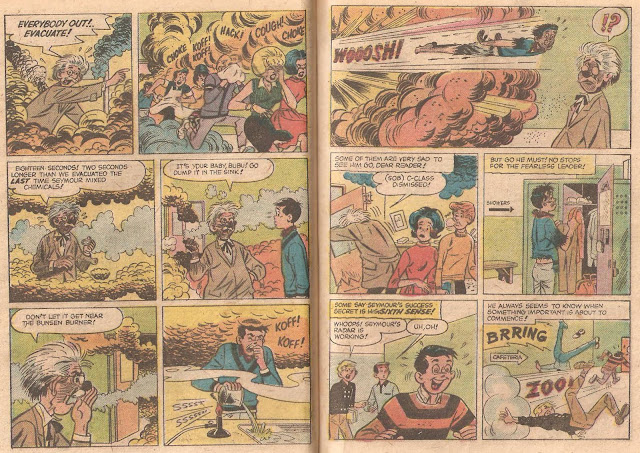 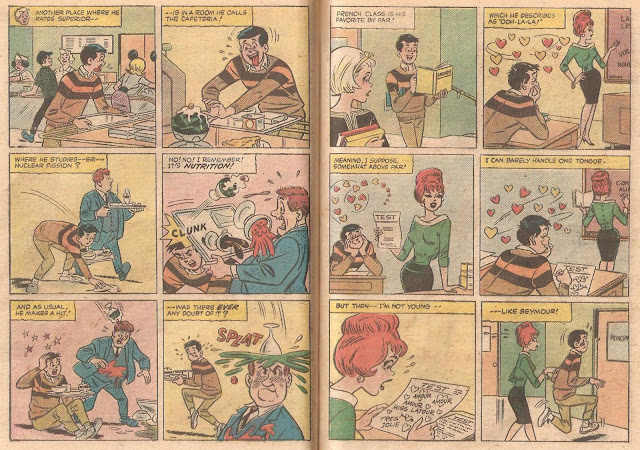 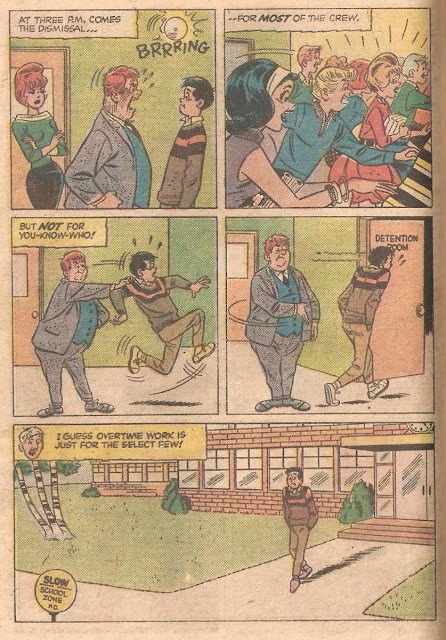 Well, that was certainly an interesting look at an Archie-type Archetype, however brief it was - 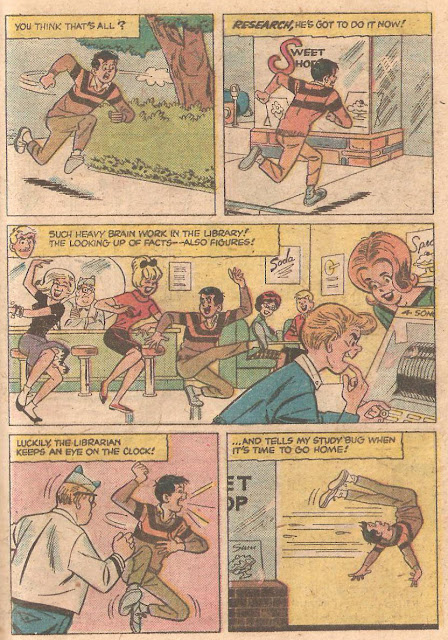 Imagine my surprise when after reaching a natural stopping point that there was more story to come. It was like reading the last few pages of a novel, and finding some extra chapters carefully hidden inside the cover flap. That kind of mechanism would make it tricky to hide from people who enjoy flipping to the back to find out the ending, or figure out how many pages the book is.

Poor Pop Tate's replacement doesn't even have much of a role here, other than to toss Seymour out for the crime of doing nothing more than reckless dancing, even though he's clearly no different than everybody else there. 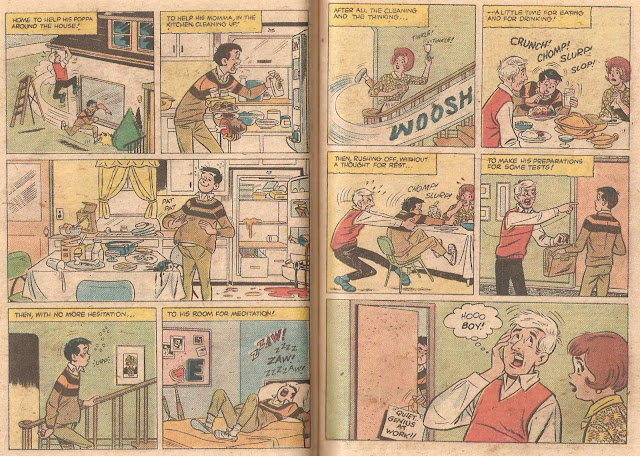 It can't be easy having a son like Seymour around, since he's got Jughead's appetite combined with Archie's clumsiness, and none of the finer qualities that either is known for. Especially since the Father's got Mr. Lodge's hair, and none of the fiances to afford his son's outrageously expensive habits. One can only imagine Hiram Lodge's level of frustration if his daughter's boyfriend and moocher were the same person. Somewhere out there must be an unsung hero with Jughead's intellect and Archie's... uh... whatever makes Archie so popular with girls in the first place. Let's say charisma.

Surely somebody with Archie's sex appeal and Jughead's smarts without any physical laziness would be a great character that'd make everybody swoon. But for now, we'll have to deal with this guy. 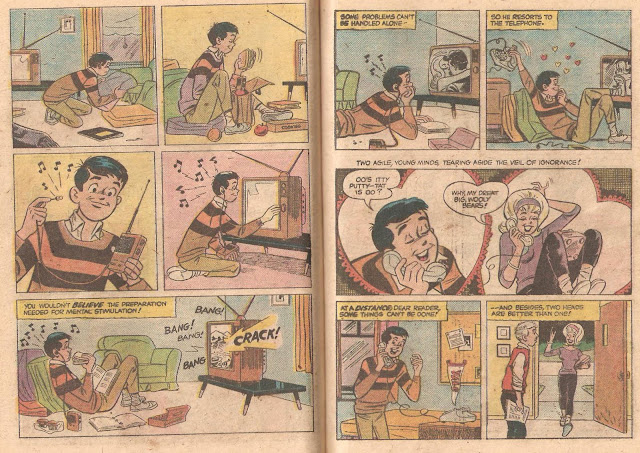 This is the scene that's shown on the cover. It's also noteable that apart from the cover, these are the only words that Seymour says in the entire comic. "Oo's itty putty-tat is oo?"

Real pearls of wisdom, this boy. 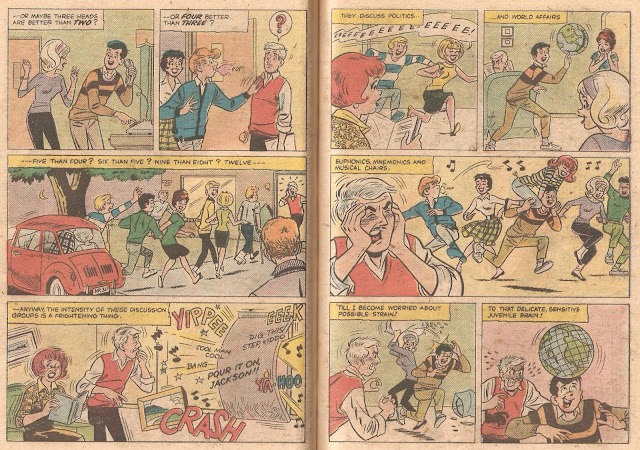 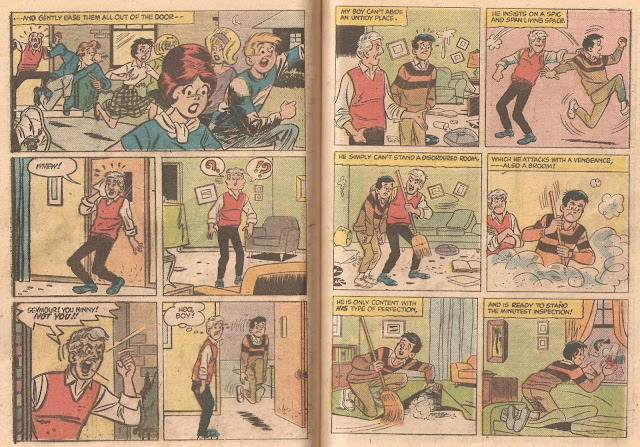 Well, he's getting ready for bed now. This day can't possibly go on any longer can it? 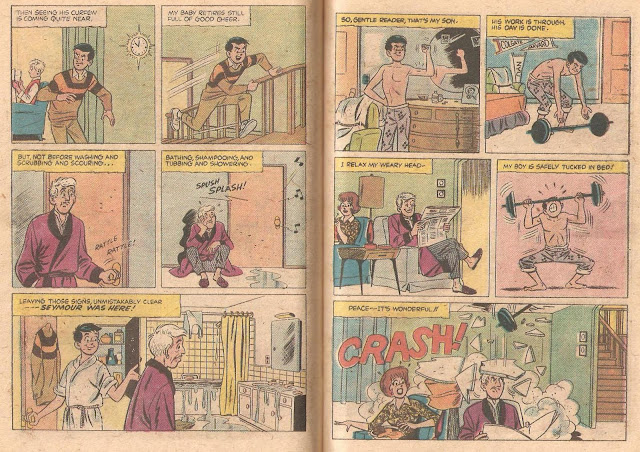 Apparently it can. However, we're almost done. 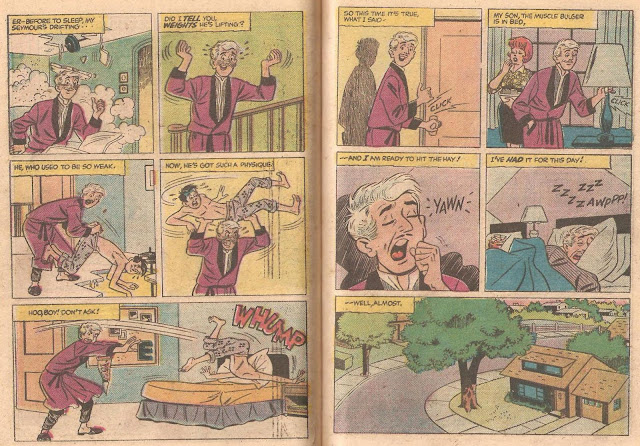 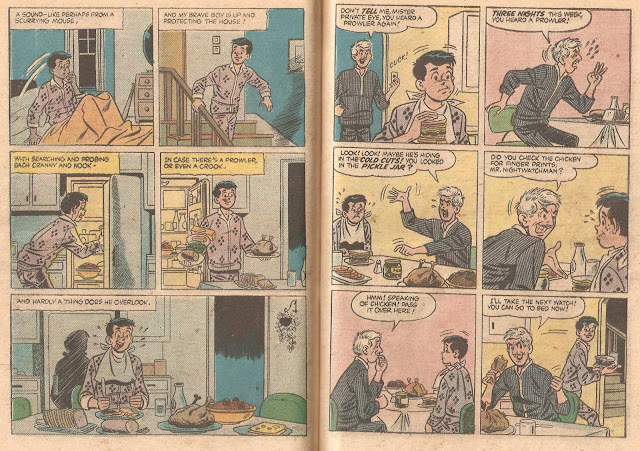 This is the only time the Father has "dialogue" in the entire comic - apart from yelling at Seymour to come back, everything else was told in narration boxes. 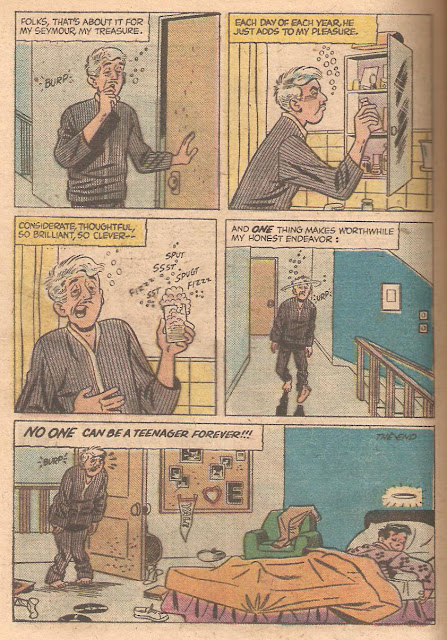 After this, it's clear that the Father's not as young as he used to be, which ties in nicely with the last line. In the words of Christopher Butcher on the release of the last volume of Lone Wolf & Cub: THEEEEEEEEEEEEEE EEEEEEEEEEEEEEND.

There was only one issue of this ever printed, since as an Archie ripoff, it didn't fall that far from the tree. There was a follow-up issue, which wasn't as strong, since there was no more rhyming, and when Seymour talked, he sounded just like Archie. If you're going to expand your formula, have the foresight to make personality changes, not just superficial ones. At least they tried; though they'd have more success with lesser known titles such as Wilbur, Bingo, Sabrina and Josie. Part of the difficulty in writing this is that, apart from Seymour, none of the other characters are named, which must make scriptwriting difficult. For anyone interested in what the second issue was like, you can find several scans here, as well as some interesting history. Did you know that Seymour was supposed to be Jewish??

He certainly doesn't look the part.
Posted by DeBT at 12:45 AM