It’s no great secret that the unsuspecting webcomic Pants are Overrated has gotten a great boost in viewership once their tribute to Calvin & Hobbes went viral. Calvin & Hobbes has remained a cultural favorite, even over 15 years after Bill Watterson’s retirement. The strip’s 10-year run is closer to 8 1/3 if you count all the sabbaticals taken, but even so, the amount of influence the man has continued to inspire is amazing. Especially so, considering he hasn’t produced any new material of the characters since then. So other artist’s interpretation of the characters however slight, are always welcome, even if some of them make people upset. 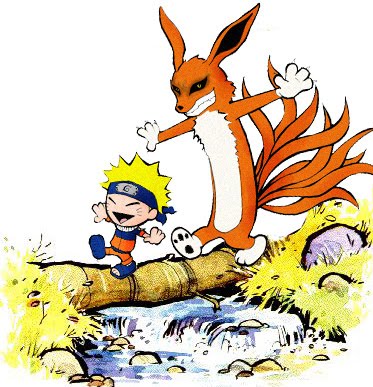 I used to have dreams where there’d be official scrapbooks of unseen Calvin drafts. There were also dreams where there were Calvin strips that had gone on as usual, like they’d never stopped in the first place. And just like Watterson who always woke up in a cold sweat when finding a store full of Pogo books he’d never seen, I always woke up disappointed that these unpublished books never existed to start with. Apart from a Van Gogh-like painting of a Cul-de-Sac character, Watterson’s stayed off the media spotlight for a long time, unofficial second-hand biography notwithstanding.

With so many people who’ve grown up reading the strip, the desire to see continuing adventures of the imaginative duo is extremely strong among fans who wanted to see more. So they’ve taken the liberty of casting their imagination into the pool, hoping their attempts will bear fruit. The closest to an adult version of Calvin would be Frazz, but even he pales in comparison to his successor. (Then again, few would be able to match that lofty hurdle) Not many people have come close to emulating Watterson’s creative outlet, though that still hasn't stopped devoted fans from trying. So with all these tributes to the legendary strip floating around, I decided to try my hand at creating the kind of future version of Calvin that would be worthy of Watterson’s vision. There’s plenty of C&H Fanfiction stories, but I’m wary about reading any of them, because I don’t want my memories of the comic to be sullied by someone not adequately suited to the task. If anybody’s gone to the trouble of reading them, feel free to send some worthy recommendations. 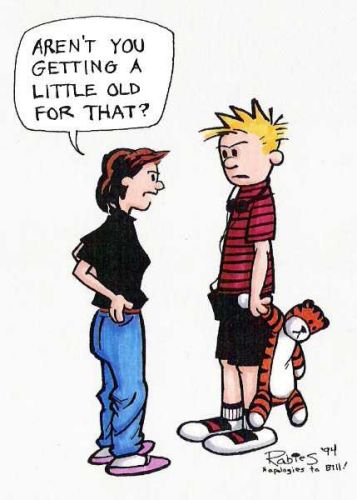 Calvin: "Okay kiddo, (claps hands) time for bed!"
Bacon: What, already?! It’s not even dark out! And it’s really annoying calling me kiddo!
Calvin: "Well, I’ve forgotten. What’s your name again?"
Bacon: It’s Bacon! But for today, you can call me Lydia.
Calvin: "Well ‘Lydia’, no matter how much you change your name, address and social security number, it’s still not going to change the fact that your sleep habits have been disturbed from your nocturnal nature, the deprived existence which makes you -"
Bacon: Daddy, I can’t understand a word you’re saying.
Calvin: "Was I using big words again? Well sorry you’re not urbane enough to appreciate the sophistication of a man as erudite as -"
Bacon: You can talk gobbledygook all you want. I’m gonna get a dictionary.
Calvin: "Oh no you don’t. I know all the bed-delaying tactics, since I invented most of them. You’re gonna have to work harder than that if you want to stay up later."
Bacon: I want a baby brother!
Calvin: "Well, that’s a new one."
Bacon: I want a baby that I can hold and hug and squeeze and yell at and spank and blame and feed and squish and stretch and bounce.
Calvin: "Let’s compromise. I’ll give you something I’ve been saving for a rainy day. Somebody who’ll let you do all those things and more. You get to bed, and I’ll produce what’ll be your next best friend."
Bacon: This isn’t a trick is it? You’re not going to lure me to bed, then strap me under the covers so I won’t escape?
Calvin: "This is a one-shot deal. If you’re not changed into your jammies by the time I count to ten, the deal is null and -"
Bacon: I’m ready!
Calvin: (After hearing the echo bounding off his daughter’s room, Calvin checks his wrist where a watch mysteriously appears, then disappears when he’s no longer looking) "That’s a new record. Too bad I can only use this once." (Calvin pulls down a box he’d kept hidden on the upper shelf in a closet) "Well buddy, looks like you’ve got your latest victim to play with." 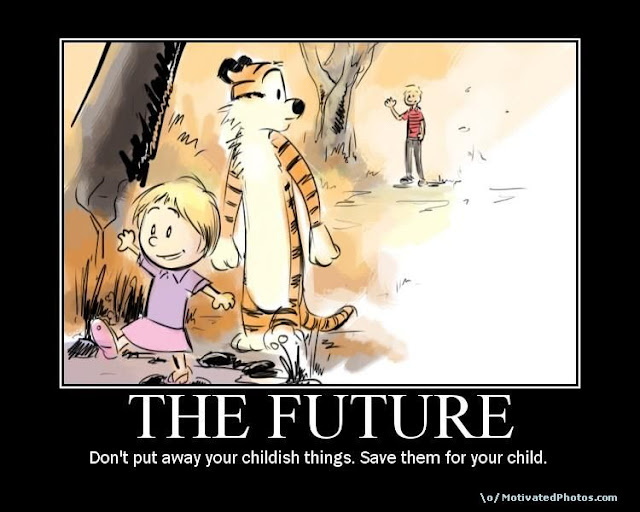 (Calvin enters Bacon’s room with his hands behind his back)
Calvin: "I’d like to introduce you to an animal I went to great lengths and trials to capture. After multiple failures, I lucked out when something got snared with a tuna fish sandwich. Can you guess what that animal was?"
Bacon: A tuna fish sandwich eater.
Calvin: "It was also orange with black stripes. Put all that together - orange, black stripes, eats tuna - what kind of animal is that?"
Bacon: (Furrows her brow in concentration) A tiger shark?
Calvin: (Shrugs) "Close enough. He’s certainly mean enough to eat a shark with one swipe of its mighty paws. His roar is loud enough to be heard two continents away. And his braggadocio knows no bounds. I give you... Hobbes!" (Produces a stuffed tiger that, even though is slightly beat-up and stitched, is still in good condition)
Bacon: (hesitantly looks over the tiger for awhile) What’s so great about this thing?
Calvin: (looks flustered) "What’s so - we had all kinds of adventures! Adventures that the FBI, CIA, NASA, ASPCA and the National Noodle Association continue to vehemently deny to this day. In addition, he’s the greatest math tutor you could ask for. All you have to do is ignore every piece of advice he gives you. It took me three years of remedial classes before I figured it out. He was also one of the founding members of the G.R.O.S.S. club, which stands for Get Rid of Slimy... uh... Surls."
Bacon: What’s a surl?
Calvin: "You don’t need to worry about them anymore, because we got rid of all of them."
Bacon: He’s that good?
Calvin: "Of course! His appetite knows no limits. I saw him calmly stare down an Allosaur just to see if he could. Why, if given the chance, I’d have him by my side once again!"
Bacon: (For one brief moment, it suddenly looks like it could leap up and gobble her up in one bite without a second thought. Bacon hands Hobbes back) Then you sleep with him.
Calvin: "You don’t understand - it’s not to make me feel better, it’s to make you feel better. Just his presence alone was enough to comfort me. I don’t need him anymore, but you do."
So, if you spent so much time with this tiger, why did you guys grow apart?
Calvin: "Your mother made some very convincing arguments, which resulted in me spending less and less time with Hobbes, who with his intelligent capability couldn’t find a compelling enough comeback. Even though he liked her a lot..." 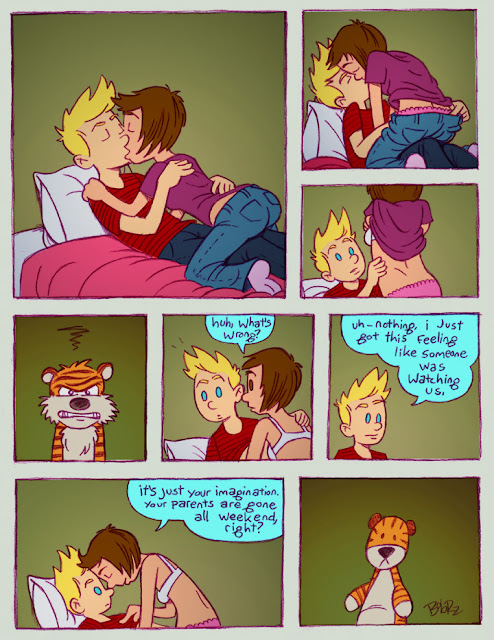 What kind of arguments were these?
Calvin: "I’d explain, but it’s kind of gross."
Bacon: Ooh! Do tell! (Gets on her belly, resting her elbows on her head, her eyes wide open in anticipation)
Calvin: "I think you misunderstood. It’s not the brains-sucked-out-of-your-nose kind of gross, it’s more like the lovey-dovey kind of gross."
Bacon: (Disappointed look of revulsion) Oh well then, never mind.
Calvin: "Look, why don’t you keep Hobbes next to you while I tell you about the Nauseous Nocture? I’m sure he wouldn’t mind some company while I tell about the lurking fear he never knew existed."
(Bacon dubiously looks at the stuffed tiger, which doesn’t seem so threatening compared to the imaginative creatures her Daddy was capable of spurting out with relative unease. Looking closer, she can feel the tiger trying in vain to get away from hearing the latest scarefest, each new story somehow worse than the last) Well, alright...

(While shutting the door on his way out, trying not to disturb his sleeping daughter whose tiny arms are wrapped around his tiger, who’s furtively looking around the room for threats that’re surely lurking under the bed, Calvin runs into Susie Derkins [she kept her maiden name] standing in a doorframe where she was watching the entire conversation take place)
Susie: I was a little worried you were going to tell her some stories not suitable for a general audience.
Calvin: "Hey, those horror comics had me staying up all night for a week and I wound up just fine."
Susie: That’s debatable. What was all that business about being scared of monsters? I thought your pet tiger was practically fearless.
Calvin: "Oh, he has no trouble with dealing with small furry creatures. I know from first-hand experience that he liked to pounce on a little kid everyday, usually resulting in a tornado of violence, rending flesh from bone. Miraculously, the kid survived to tell the tale. It’s bigger animals he’s more reluctant to take on."
Susie: (Playfully slaps her silly hubby) And you let our daughter alone in the presence of a wild animal??
Calvin: "Hey, he can’t be any more dangerous than all those monsters I was talking about."
Susie: Actually, what I was thinking about earlier was telling her about the birds & the bees.
Calvin: "Well, I wasn’t going to wait 9 months to make another baby. That would’ve been the perfect excuse for her. She’s hard enough to deal with while awake, especially since slipping Thorazine in her meals is against the law."
Susie: I meant your embarrassing history. We’re going to have to confront her sooner or later about those Furry fans who drew plenty of slash pairings with you and your favorite toy.
Calvin: (Indignant) "Those drawings were ALL widely inaccurate! My penis is WAY bigger than that!"
Susie: (Snorts, rolls eyes) In your dreams... 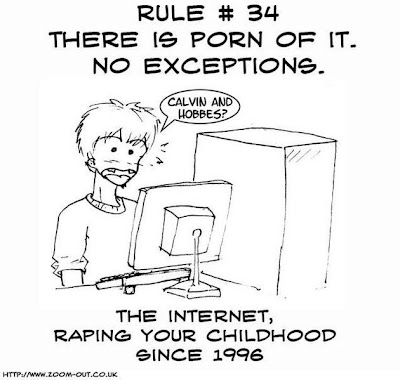