It’s just been recently announced that after being in the business since 1997, Tokyopop will no longer be publishing Manga after May 31st. Although the writing was on the wall since they hadn’t had a breakout hit since Fruit Basket was finished, and they severely cut back on their Manga releases, I somehow always thought that Tokyopop would somehow survive. Wasn’t it one of the revolutionary founders that allowed Manga to be printed unflipped in an accessible $9.99 per volume (cheap!) each? It was only after their success with their aggressive strategy that other Manga companies followed suit, abandoning the comic market in favour of the bookstore market, and they’ve never looked back since. Tokyopop’s Germany office may still be open, but that may be small consolance since Kodansha pulled all their Manga licenses two years ago. Whether they're still feasible for English Manga there is still up to debate. 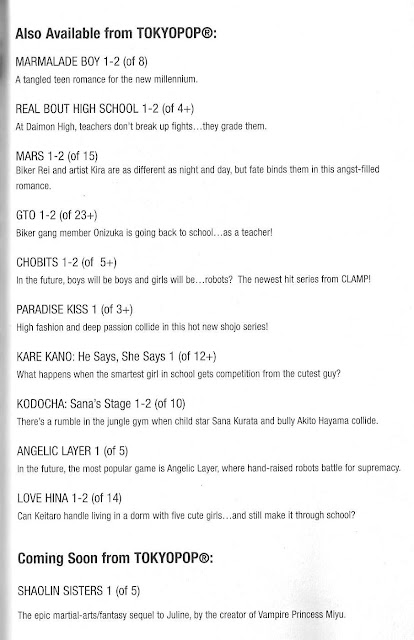 Although Tokyopop was one of the major movers and shakers of Manga history and one of the Big Two next to Viz, their reputation took a serious nosedive when their Manga output began to outpace demand. Their catalogue grew from one page of titles to two pagers full of dense text without any description. Another added bonus of the sparse catalogue was that there was room to show how long a series was, so people could know how long to expect they could stay with a title. Is it any wonder why readers became confused about what to pick up next? There were something like 40 new volumes being released a month, and even the most devoted fans had to do some serious cut-backing in order to afford the stuff they really wanted. As a result, the less popular Mangas that weren’t being sold as much as the bestsellers became neglected until their next volume releases were several months apart. It also didn’t help that they kept redesigning their website to become more user-unfriendly with each iteration. 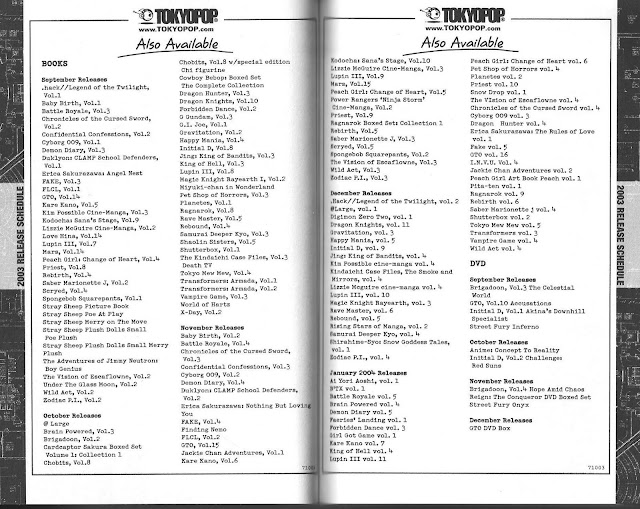 There had been rumblings starting from when they commenced mass layoffs of most of their staff and Stuart Levy’s continuous interest in movies rather than Manga publishing. It’s certainly ironic, since one of his selling points was Manga were equivalent to reading movies in comic form. Of the properties that Stuart Levy was hoping to be made into movies, none have ever moved past the publicity hook that they might be made someday. It’s even more disappointing since one of CMX’s previous editors found a new home there, and there was brief hope that some of the former Manga company’s titles might be picked up. What’s going to happen to Asako Suzuki now?

Then there’s the whole OEL/American Manga copyright debacle, which I won’t even attempt to touch, since none of the titles looked interesting to me. (With the sole exception of Reality Check!, which was reprinted in Black & white, and strangely enough, added clothes to the cyber-catgirl hybrid) They may have had their intentions in the right spot, but their output needed more polish before being distributed. While everybody extolled the virtues of working without restraints, some titles could’ve benefited from more editorial input. Not just in making creative suggestions to inspire the creator’s imaginations further, but also tightening up the stories so they’d flow better. Anybody remember the whole Samurai Zombie fiasco?

Some positive noteworthy things Tokyopop was responsible for:
Negative ideas that Tokyopop will be remembered for:
Whatever their virtues and faults, Tokyopop certainly had an impressive diversive output. Whether it was from All-Ages titles such as +Anima, Et Cetera, Hyper Police, Qwan, and Sgt. Frog. It was their output in Shojo titles like Mars, Miracle Girls, Peach Girl, Saint Tail, Paradise Kiss, Pet Shop of Horrors and Planet Ladder that made detractors feel that Manga was just for girls. Even their releases of Mature titles like Battle Royale, Remote, DragonHead, King of Thorn and Planetes didn’t change these people’s minds much. I suppose being regulated to Hetalia, Future Diary, Deadman Wonderland, Chibi Vampire and Gakuen Alice wasn’t enough to keep them afloat.

So far, it looks like Kodansha will be filling in the gap when Tokyopop let their licenses over their old properties lapse on titles such as Sailor Moon and Love Hina. However, given the lukewarm reception Kodansha’s given in making themselves known to the public, the jury’s still out on whether they’ll receive a warm welcome. They’re remained remarkably conservative in their advertising and press releases, which is a death spiel for any company wanting to survive. Whatever Tokyopop’s faults, they at least made noise doing whatever they deemed attention-worthy. Of the two titles that Kodansha’s released so far, both Akira and Ghost in the Shell were already translated by Dark Horse. Until we see evidence of an actual translation rewrite on future releases, we’ll hold our reservations in check.

In the end, their downfall could be attributed to letting their foundation Mangas lapse after constantly looking for greener pastures to graze upon. With so many titles being released over the years, special attention should be paid to those that stood out, and be reconsidered before they’re no longer available anymore. The one title that keeps coming to mind is the single volume I.C. In a Sunflower, a collection of short stories by Mitsukazu Mihara, creator of DOLL.

Mihara’s other Gothic works were a popular mainstay of Tokyopop’s Manga line, thanks to Simon Furman’s translation, who was a writer for Transformers. He gave the disassociated vibe of those protagonists such a realistic feel. Even though he wasn't the English Adaptor for this, I still think this book is her best work. Whenever I open the book to read a page of one of her stories, I always wind up reading the entire thing the whole way through. It’s that good.

One of the stories even has what could be called a Sopranos-type ending. I had to reread that one three times before I figured it out. All the clues were there – I just needed to pay attention. Finally all those lessons in English class for finding underlying meaning in the text became useful! (To anyone who has a copy and knows what I’m talking about, no I’m not going to tell you what it means - it’s better if you figure it out for yourselves) 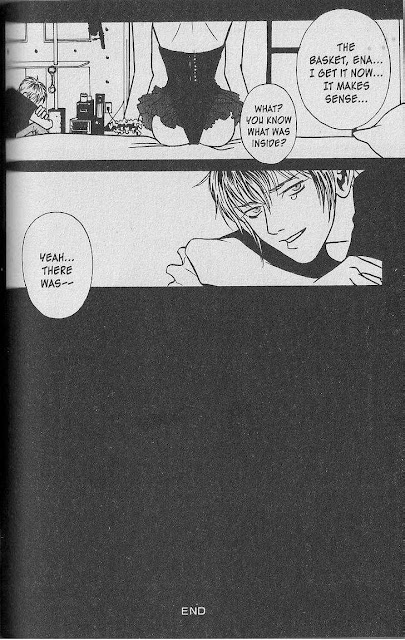