Death of a Drama Queen

Taking a little break from the monotony of all the recent repetition. Last week, a certain well-regarded Hollywood actress died suddenly. Although she was greatly respected in her heyday, I wasn't familiar with her movie roles, since most of them weren't captioned or available. And the ones I did see (Cleopatra & Cat on a Hot Tin Roof) weren't to my taste. 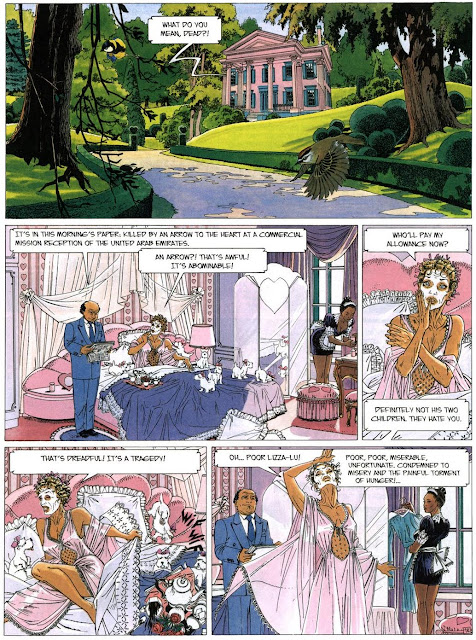 The only movie of hers I actually saw later in life was the one where she couldn't use her beauty as a selling point. Like so many hoary movie classics, I preferred the MAD satire to the original since they distilled the pure essence of the movie without having to waste two hours to get to the point. With the release of DVDs, it's even easier for me, since I can just put the subtitles on and fast-forward through the dull scenes. That way, if it's a lousy movie, I only have to suffer half as much. For some reason, everybody I've told this to finds this hilarious. 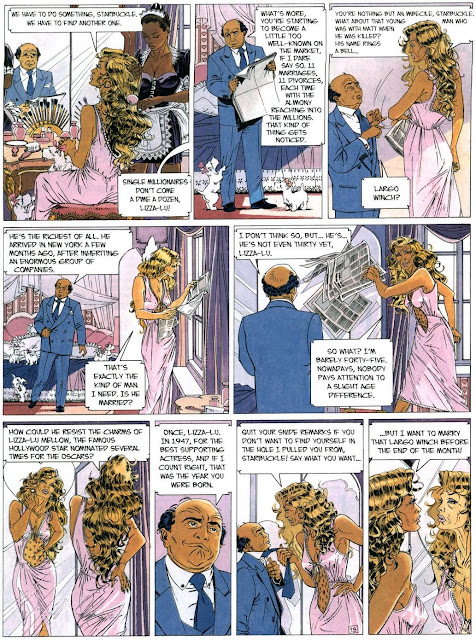 Actually, I just wanted an excuse to show these pages from Largo Winch. Largo Winch is about an adopted child who's been secretly raised up to inherit the richest businessman's empire. After the old man's suspicious death, Largo's suddenly thrust into the cut-throat business world with his instinct for handling threats. The above is a minor subplot that happens in the third album, but because they're collected in batches, is available in the second Cinebook volume. From what little I've read, this is a smart decision, because the storylines start in one volume and conclude in the next.
Posted by DeBT at 8:30 AM