Time for another look at some unforgivable mistakes that should've been caught early on with the latest Smurf volume. The biggest and most noteable one in The 100th Smurf is the incident between Vainity Smurf and the Mirrored Smurf. After an accident between a mirror and a lightning bolt (long story), Vainity & Mirrored eventually find themselves at odds sharing the same room with someone copying your every movement, even if they're as handsome as yourself: 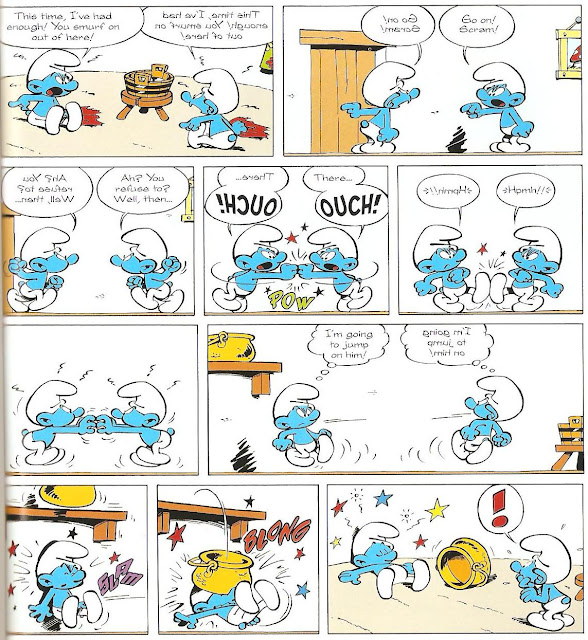 I'm sure you've noticed by now, but the thought balloons in the 7th panel are switched, making it look like Vanity is backing into the pot, when it's actually the Mirrored Smurf. The reverse text should be on the Smurf running backwards into the wall. Part of the confusion may stem from the constant back-and-forth dialogue, which rotates whenever the camera focuses from another direction, violating the rule of 180 degrees in the 2nd panel. What makes this particularly glaring is that all the dialogue between the two of them in panels 3-5 were consistent right until the third row. Another Caveat; the backwards dialogue was slightly easier to figure out in the French font, but I suppose in this case, a mirror really does come in handy.

Another early mistake comes from near the end of the titular story, The Smurf & the Egg, about a mysterious magic egg that grants wishes to whoever touches it. The origin of this MacGuffin is never revealed, and near the end, it hatches into a chick. However, the noise of the shell breaking is absent in the third panel, even though there's "sound waves" coming from the general direction. It could be explained away with the lines representing movement, but the same "sound waves" are surrounding the "pop" in the 5th panel. Not to mention I remember there being noise in the French edition. 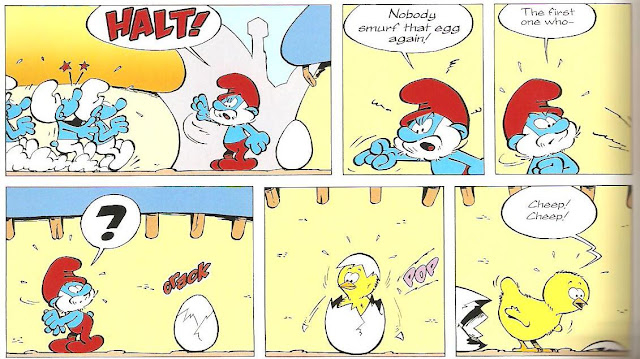 On the plus side, in The Fake Smurf, we get several lessons on how not to infiltrate and terrorize the Smurf village. The first and most important lesson being: feed your pet before going out onto your spy mission. 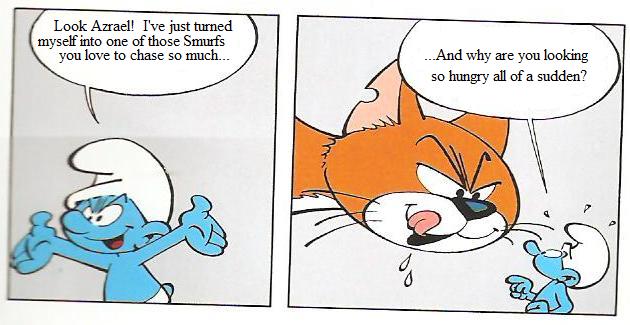 The other important factors being:

2. Learn to speak the lingo.
3. Be aware of the ritualistic holidays and traditions.
4. Don't poison the laundry.
5. Make sure your sabotage works.
6. Don't let your false identity slip.
7. Know when to run when you've been ousted.
8. When returning to your true form, don't forget your original size.