With the sudden influx of protesters in the Middle East and the invasion of Libya, it seems timely to repost some of Shoe’s comics involving Army overspending. Their rationale for spending hundreds of dollars for products that would otherwise cost pennies in comparision probably stems from the philosophy that “if something is that expensive, it must be good quality”. Since I go out of my way to wait for a bargain, or do extensive shopping around before buying something in bulk, I can’t identify with this mindset. I'm more likely to follow Ferengi rule no. 3: "Never pay more for an acquisition than you have to". Of course, since the Army's constantly playing catch-up with their opponents, it’s a never-ending keeping-up-with-the-Jones relationship on the battlefield. 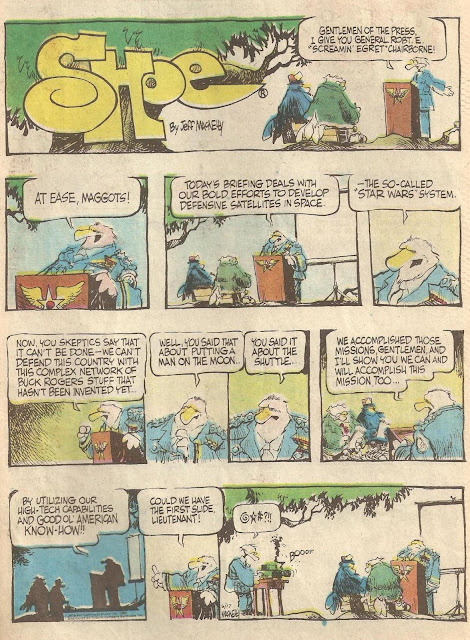 For a family newspaper comic, Shoe was the closest thing to a newspaper article in comic form than anything else. It would go into heavy verbal arguments before ending on a well-intentioned point. I learned how to do pointed debates by studying the strip. Most times, I would just look at the punchline first, then read the strip from the beginning since it was so well-written. However, this wasn’t always a winning formula. Sometimes the material would be too dry for my taste, or I couldn’t comprehend the politics behind the talking beaks. Even now that I’m older, there are times when my eyes are likely to glaze over the political pages in search of something funnier. Even so, I miss the lingering monologues with occasional commentary from the chorus. There's nothing like it in today's comics. 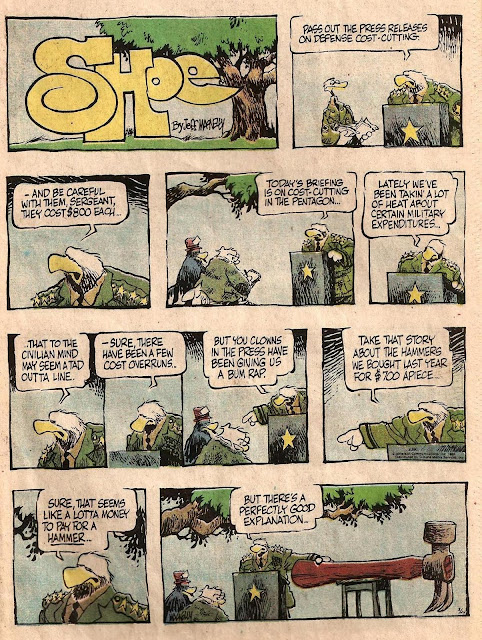 One thing that amazed me was that I read that Jeff MacNelly was a Republican political cartoonist. This surprised me, since so many of his comics had a liberal stance. Then again, he could’ve just been railing against the inanity of asinine decisions. It didn’t hurt that he was well-drawn and funny. The reason most Republican stories don’t succeed where Liberal ones do is that Republicans are more concerned with the message, where Liberals are more concerned about the story. (Anybody remember Liberality for All?) Once the audience identifies with the characters and the trials they’re going through, you can attach whatever moral impetus onto them, as long as it fits their characterization. If you go too far in your leanings and don’t let them use their unique voices, you’re likely to lose your audience to a strawman argument. I don’t mind opposing viewpoints, but they’re more likely to gain brownie points with me if they make compelling arguments rather than one-sided claims that prey on unfounded fears. 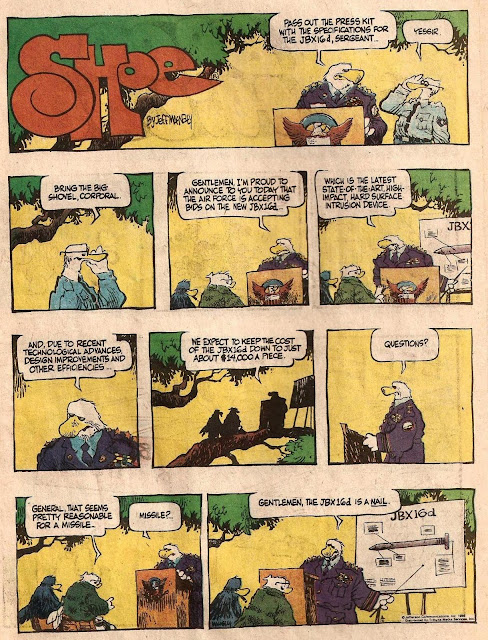 When you consider MacNelly’s influence in the cartooning world, you can see why so many artists were inspired and influenced by him. Including one well-known Bill Watterson whose political cartoons were unable to successfully imitate his style, and left that field forever, only to wind up creating one of the most popular comics ever. In addition to his political works and summaries for Dave Barry’s articles, MacNelly also created another comic strip in 1993, Pluggers, a single-panel comic about stupid people’s beliefs. It was also around that time that I noticed that the quality of Shoe wasn’t as strong as it used to be. 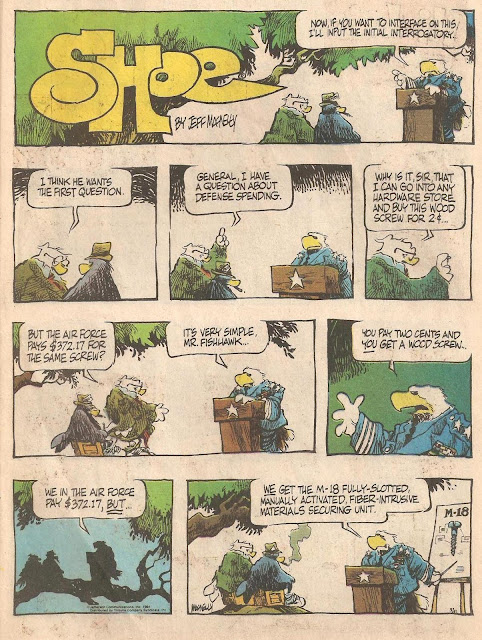 While its possible that MacNelly was being stretched too thin, there's several factors to consider. The writing in Pluggers was made was made easier since most of it was from reader’s contributions, so only the illustration had to be done. It was also around the time that MacNelly had a computer assistant who helped divide his colouring chores. Another major incident was the accidental death of his first son in 1996, which was a major psychological blow, and led him to abandon his Pluggers strip a year later. Then things were further compounded with his lymphoma, which like Douglas Adams, took his life too soon. To the man's credit, he continued working right to the bitter end, joining Osamu Tezuka & Jim Henson's ranks.

There are times when I’m sorry that not all of Dave Barry’s books kept the MacNelly drawings in the newspapers. I would be curious to know what he drew for the Sailor Moon article myself.