Adam’s now been retitled Adam@Home, but that wasn’t always the case. It used to be just titled Adam in accordance to other single-name strips such as Cathy, Tiger, Henry and the like. As is often the case with legacy comics that’ve gained a popular following, the strip’s kept going on through the efforts of a substitute artist, Rob Harrell, former cartoonist of Big Top, while Brian Basset’s moved on to focus on Red & Rover. (If you’ve never heard of these strips, don’t feel bad - I haven't either) 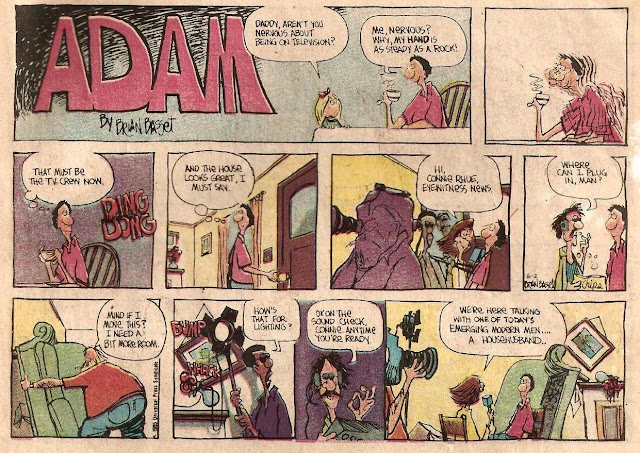 I hadn’t seen the Adam strip for a long time, and after checking the latest comics, I was dismayed at how lifeless it had become when compared to its earlier beginnings. The characters are now regulated to talking heads, while Adam seems to have taken the profile of Homer Simpson. The character designs are no longer Brian Basset’s, and it suffers in comparision. 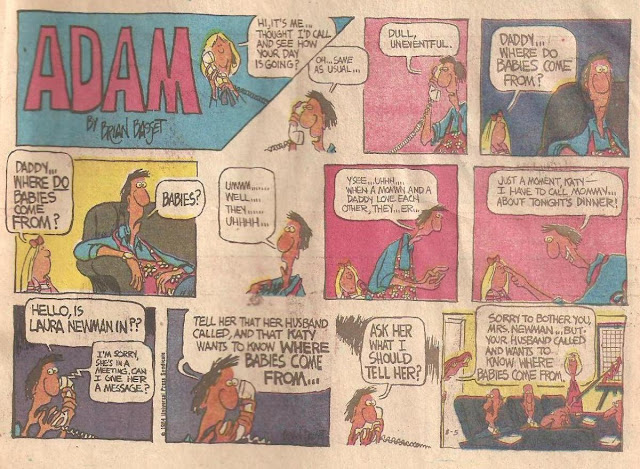 While Adam was for the most part, about a stay-at-home dad, there were weeks-long storylines about how the man simply could never catch a break. Whether it was competing with another dad over who could change a diaper faster, or being in a weight-loss contest against other mothers, there was always an 11th hour moment that would render all his carefully planned outcomes moot. Sadly, the collections seem to be very selective in their choices, and there were multiple times where a story would be shown with various strips missing. 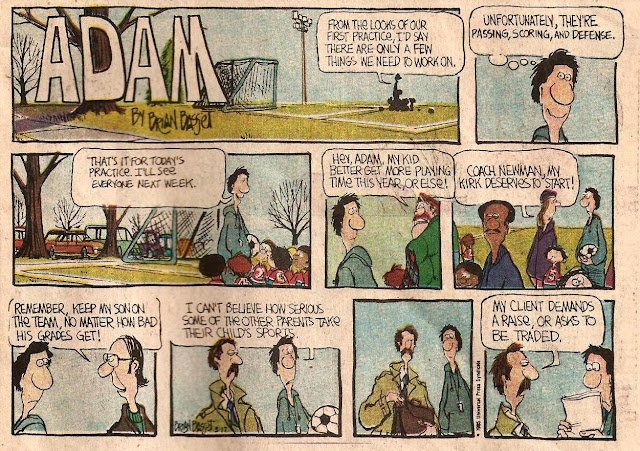 When I read on MightyGodKing about outdated 80s movies, I was surprised that in his description of Mr. Mom that he compared it with Adam, saying that Adam wasn’t funny then. I had no idea that it was considered unfunny. To me, all comic strips had a peculiar routine that necessitated thinking in order to “get the joke”. There were oftentimes that I was left completely baffled at the punchline (I’m not alone) and could only understand it if it were explained to me. It wasn’t until years later that I heard my mother laughing at a cartoon that I understood that they were supposed to be funny. Like the MAD fold-ins, I thought the purpose of comic strips was to make a point. (Closer to the realm of political cartoons) I had to master humour in order to understand it. 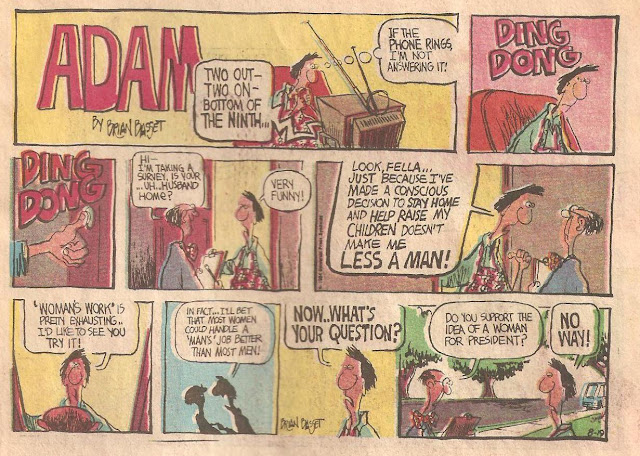 A lot of the early mechanics of Adam seemed to have been completely abandoned or forgotten. Early on, Adam was a househusband who, while he didn’t quite enjoy the daily routine of keeping house, still rose up to the challenge. Then later, he became rather lazy, trying to find other convenient excuses to NOT do housework, such as letting dirty laundry pile up until there was enough to go through the hassle of doing the job. 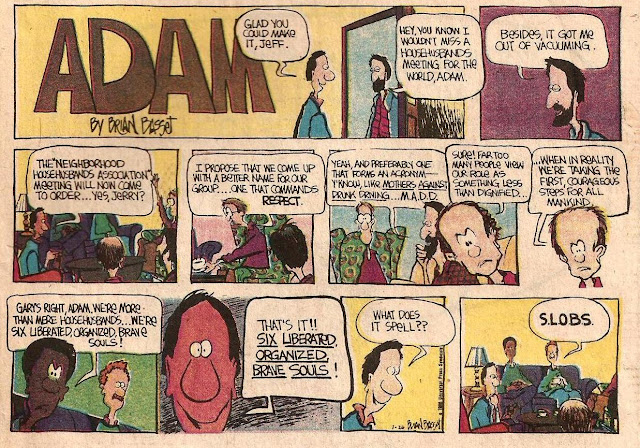 Also, some early secondary characters seem to have faded out into the sunset without another word. One of the most consistent supporter characters was Walter, Adam’s next-door neighbour who constantly heckled the man for staying at home with the kids. 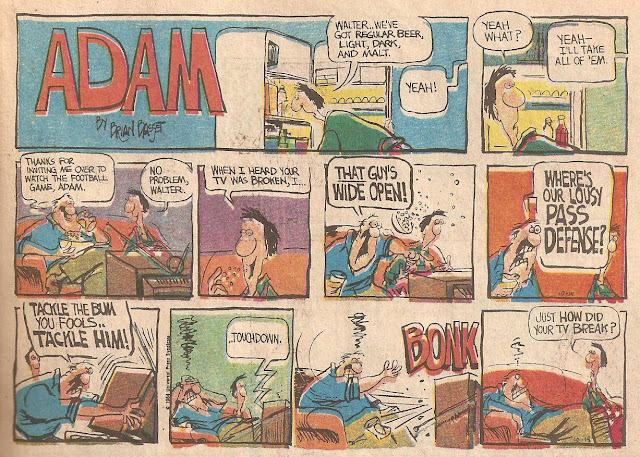 Another forgotten star was their pet dog, Kipper, who was a constant mainstay, occasionally popping up every now and then. Eventually, he stopped showing up, which led readers to wonder what happened to him. In a storyline about gerbils in the walls, it was revealed that the dog had died off-screen years ago. 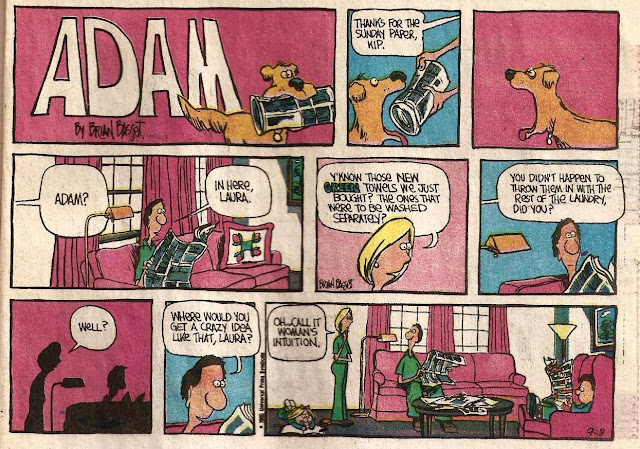 Of all the so-called “nemeses”, none was as effective as the dreaded washing machine that would regularly chew up socks like there was no tomorrow. It was the mechanical equivalent of the kite-eating tree. There were even several strips where the machine ate Adam as well. (Don’t worry, he survived) 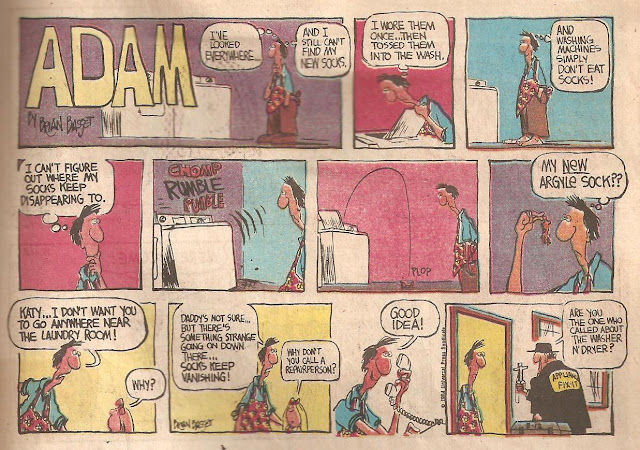 There were plenty of new characters introduced and forgotten over the course of the first ten years, but only one new arrival has managed to stay as part of the family. I’m talking about baby Nick. There were several strips where Laura was pregnant for months on end. Eventually, after several months, baby Nick arrived onto the scene, introducing a new wrinkle into Adam’s busy schedule. This was in the early 90's before April showed up in FBOFW. The difference being that April grew up while Nick’s still remained a baby for over 20 years.

It's possible that Lynn Johnson was influence by Brian's addition, since she introduced April a few years later. She's even praised Brian's strip in a foreword to one of the collections, saying that he was a consistently funny man whose drawings were capable of making her laugh. It didn't hurt that his subject material was the kind of stuff she most identified with. She concluded her introduction with, "Here, at long last is someone who really understands me!" 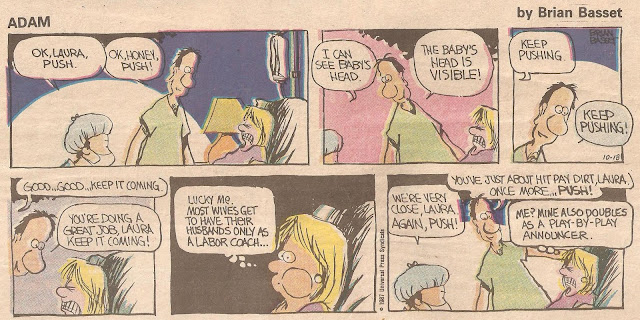 Adam managed to keep its momentum long after Nick's arrival, (no mean feat) with several outlandish plots that would go on for weeks before ending in inevitable disaster. Then somewhere along the way, something changed. The stories became nonexistent, and the singular punchlines more pronounced. The energy and drive that was greatly enjoyable early on seemed to be missing. It's that quality that I miss and am disappointed that it's forgotten in today's lackluster effort. Adam could benefit more by returning to its early roots. 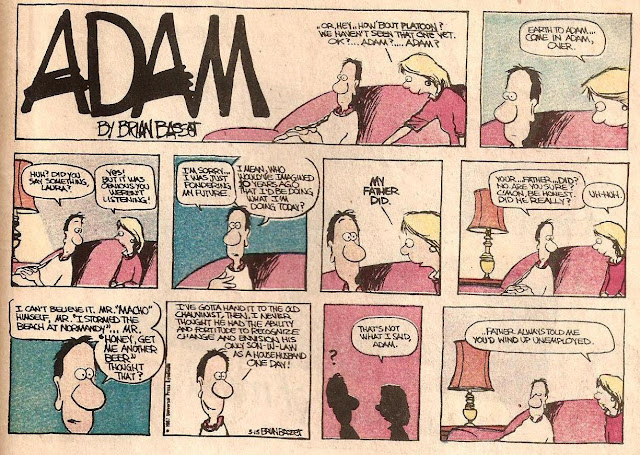