Last week, Wizard and Toyfare magazine announced they were going to fold. I was planning to repost another comic essay back when they weren’t as annoying; Scott McCloud’s Understanding Manga. This was an early version that was expanded on and updated in his book Making Comics. However, after doing a search on the web, I found that it’d already been posted up by another blogger who’d saved the relevant scans from the now-defunct Scansdaily 1.0; which made my scanning the pages redundant. (If anybody wants a larger version of the present scans, just ask) EDIT - Erika Freitas wanted a larger version, and I obligied. 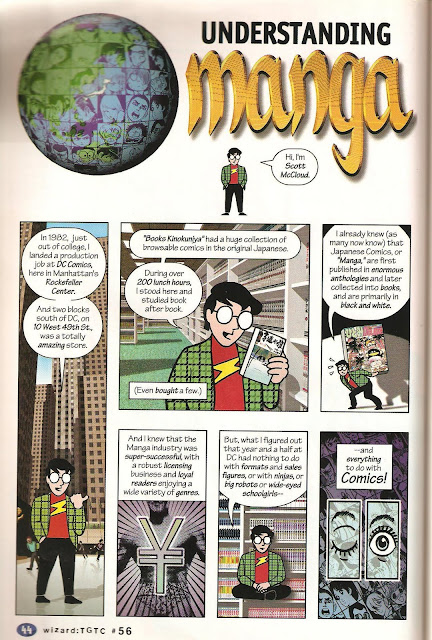 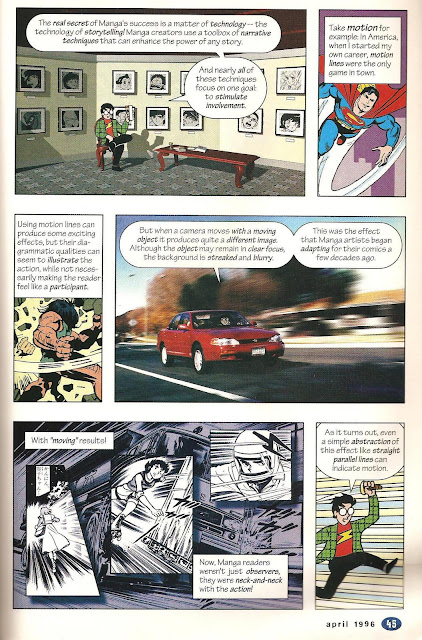 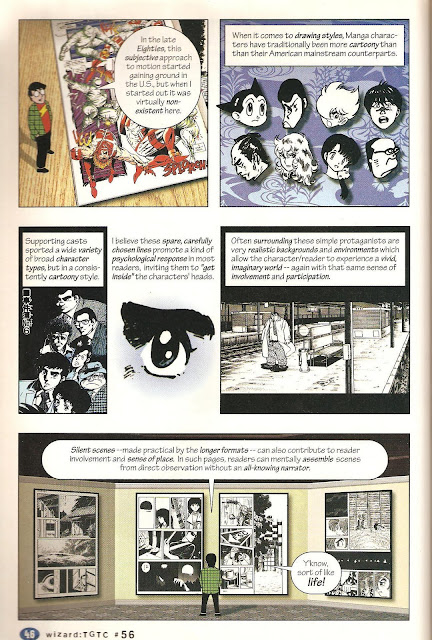 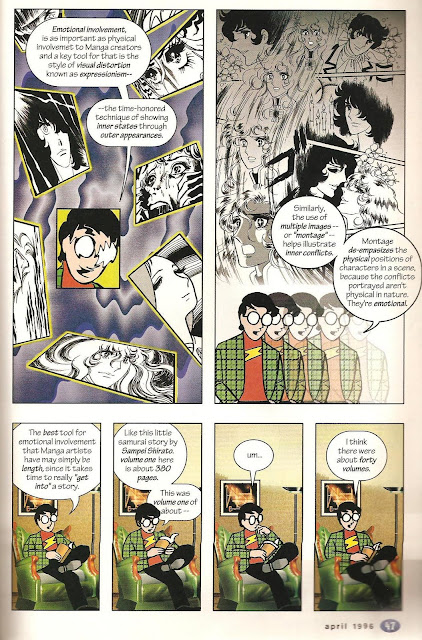 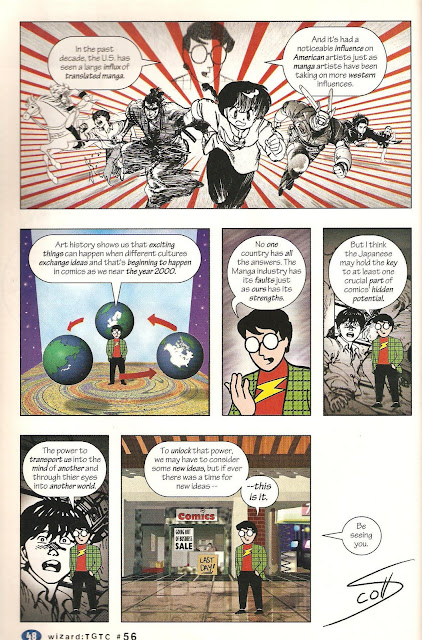 However, I didn’t want to let it pass up without comment. The characters in the third page can be identified easily*, but the Detective Manga in the middle eludes me. Some reference would be nice - any bibliographical information in the magazine would've been helpful. Wizard devoted dozens of pages to the price guide. Couldn't they bother to slip a line or two of where those images came from?

In particular, I wanted to pay attention to a certain section of the essay here:

I have to confess that I’m naturally curious about the stories Sanpei Shirato did, since he’s revered as one of the old Manga Masters. The only Manga of his that I’d seen was The Legend of Kamui, which was published by Viz back when they were Eclipse, and printing titles such as Mai the Psychic Girl and Area 88 in biweekly comics.

For the uninitiated, Kamui is about an apostate Ninja who’s on the run from his pursuers. The code of a Ninja states that the only way they can leave their clan is by death. For private reasons that are never stated (or maybe they are in a flashback I haven’t seen), Kamui never reveals why he left in the first place. But then, the reason isn’t that important - it’s the sense of distrust that pervades Kamui’s worldview. He can never stay in one place for too long, lest his assassins catch up to him. This allows the stage to continually change according to the author’s whims whenever he grows bored with a location and keeps up the suspense of Kamui getting caught.

The two volumes only collects the first 13 issues of the series, and I spent some considerable effort at finding the remaining issues #14-37. They were full of the typical nitty-grittiness that made the Ninja Manga such a compelling read. (Naruto this ain’t) Even with the expanded storyline, I felt that there were instances where pages were left out or missing. A letter printed in the penultimate issue confirmed my suspicions: 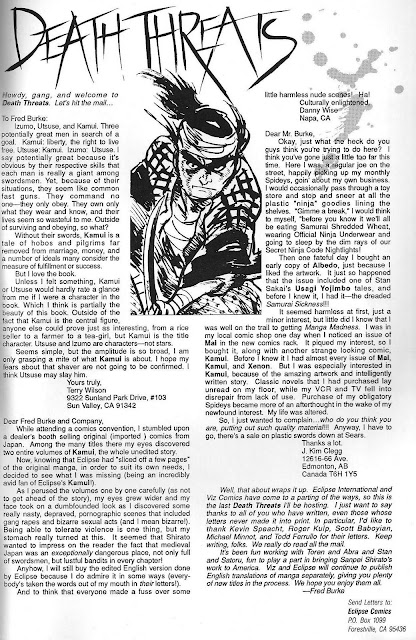 While attending a comics convention, I stumbled upon a dealer's booth selling original (imported) comics from Japan. Among the many titles there my eyes discovered two entire volumes of Kamui, the whole unedited story. Now, knowing that Eclipse had "sliced off a few pages" of the orignal manga, in order to suit its own needs, I decided to see what I was missing (being an incredibly avid fan of Eclipse's Kamui!).

As I perused the volumes one by one carefully (as not to get ahead of the story), my eyes grew wider and my face took on a dumbfounded look as I discovered some really nasty, depraved, pornographic scenes that included gang rapes and bizarre sexual acts (and I mean bizarre!). Being able to tolerate violence is one thing, but my stomach really turned at this. It seemed that Shirato wanted to impress on the reader the fact that medieval Japan was an exceptionally dangerous place, not only full of swordsmen, but lustful bandits in every chapter!

Anyhow, I will still buy the edited English version done by Eclipse because I do admire it in some ways (everybody's taken the words out of my mouth in their letters!). And to think that everybody made a fuss over some little harmless nude scenes! Ha! 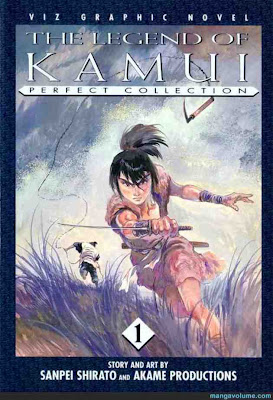 I was going to wait until samehat continued their coverage of old Manga essays in the olden days, but they never continued their efforts. From the content of the letter, it's obvious that Kamui was more serious than the typical throwaway Ninjas that occupied American comics back then. It was more reminiscent of Lone Wolf & Cub. The popularity of the latter title was enough that Dark Horse made the impressive feat of translating the entirety of that classic Manga one volume a month (even if the last volume was late). You'd think the smaller format would be a hinderance to the storytelling, but the first two volumes have the most cramped text balloons, while subsequent volumes have more free space, allowing for easier reading. It also helps that the lack of narrative makes it a perpetual pageturner, which Goseki Kojima was a master at. Reading these was equivalent to seeing the storyboards for a Samurai film in comic form.

Since then, Dark Horse's concentrated on other titles with the Kazuo Koike / Goseki Kojima team-up, with varying results. Samurai Executioner was more episodic, with a lackluster ending, and Path of the Assassin seemed more focused on shock than substance. I thought they'd move on to Sampei's Mangas, but they've been reluctant to do so. When Brocolli announced that they'd licensed Kamui, I was disappointed when I found out it wasn’t the same Kamui I was thinking of.
While the Seinen Ninja Manga may be better known, I was hoping that interest would garner in the title before it became more realistic. (Similar to how some fans favor DragonBall over DragonBallZ) In fact, the Kamui we know is actually Kamui Gaiden, the sequel to Kamui Den which was much lighter in terms of artwork and story. Kamui Gaiden was basically Kamui revamped with serious artwork and politics. I thought that Lone Wolf & Cub would pave the way for other old-school Mangas. Sadly, that has yet to happen. Here's a few scans of Kamui with a simpler character design: 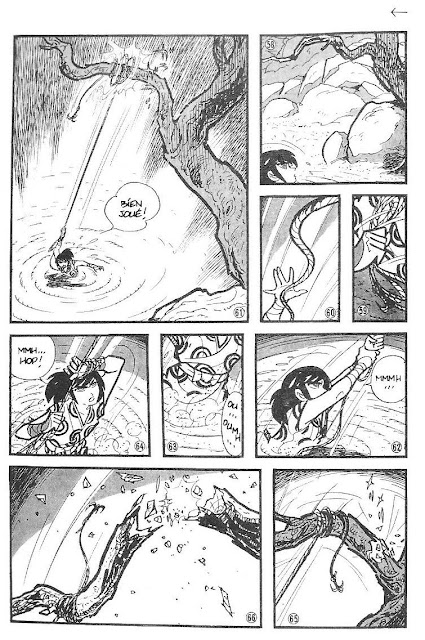 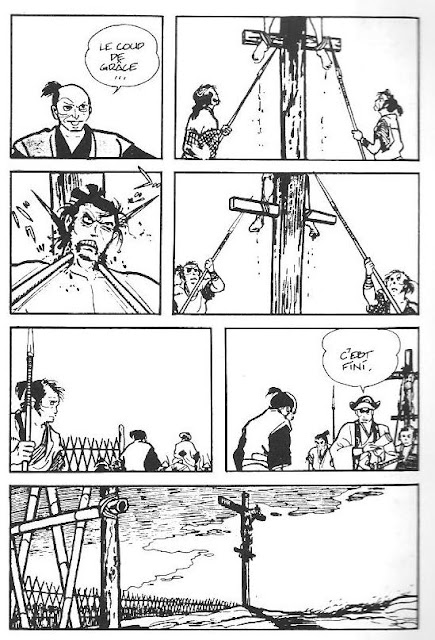 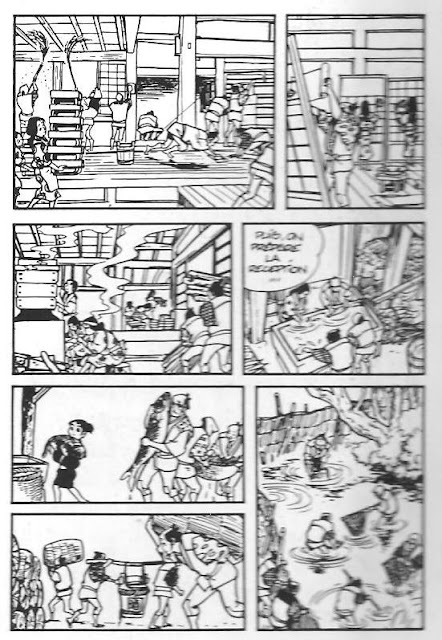 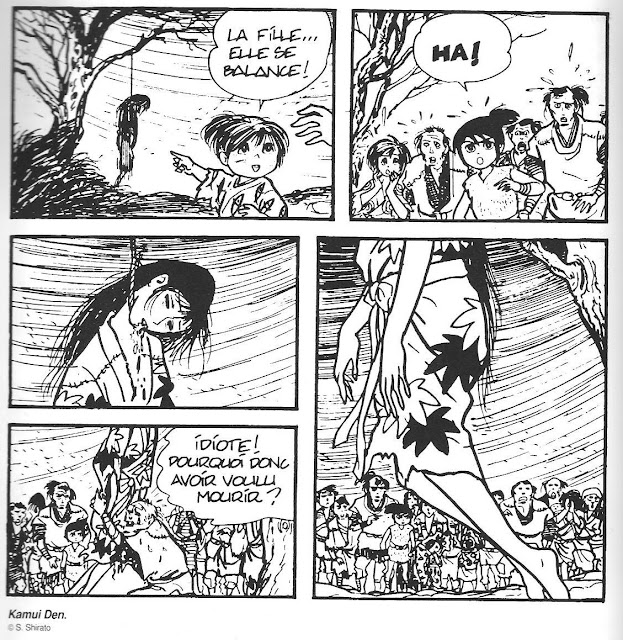 These scans were taken from L'univers des Mangas, a French book that was printed in 1991 and still relevant today. The book also briefly shows two similar Samurai Mangas by Kazuo Koji and Hiroshi Hirata. 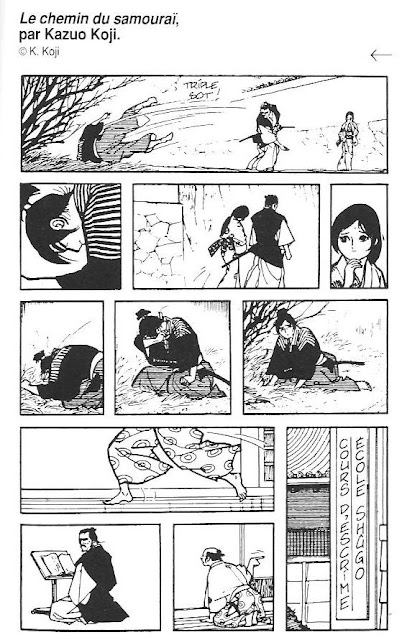 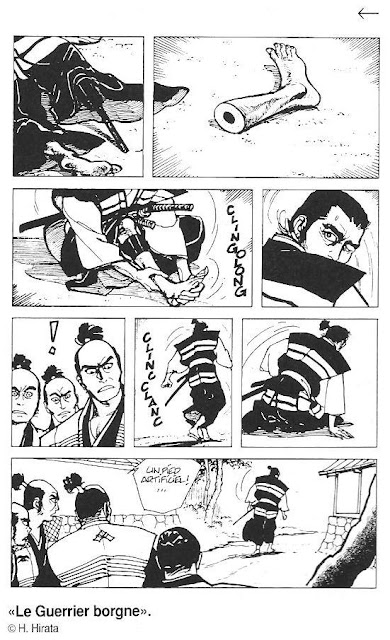 I'm curious about these myself, since they're similar in design to Kamui. I'd be interested if there's anybody out there who's willing to take on these ambitious projects. I wouldn't mind if they were reprinted in a size similar to the LW&C volumes, since their artwork actually improves upon miniaturization.