I've been on a BD binge lately, picking up all kinds of European comics that haven't been translated over here. Ranging from Émile Bravo's Impressive Adventures of Jules after being impressed with his version of Spirou; to scanning the wraparound covers of Jacques Ferrandez's adaption of Jean de Florette & Mannon of the Spring. I've mentioned my lamentation of the lack of translation of BDs compared to Manga, though its quite understandable. Bande Dessines are considerably more expensive, are more densely worded via pages, and require a different mindset to translate properly.

However, while casually browsing the French section of the library, I came across what I later found out was originally a German comic. Upon opening it, the first few pages were blank, with a double-page spread that showed an unidentified mass growing bigger with every page before accumulating into a dense speed-line aimed at the center. It's not every day that you get to see the Big Bang recreated in comics form. 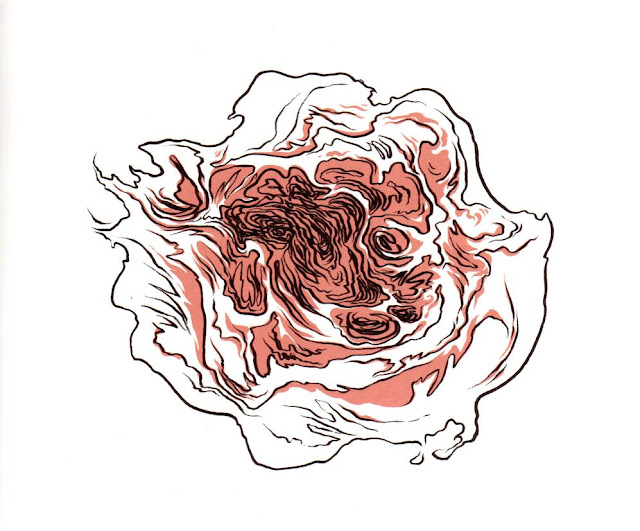 So far, it was only briefly mentioned in Paul Gravett's best of 2010 international comics. Since his reviews focuses on the covers and the descriptions, finding about these things is difficult if the audience isn't aware of the interiors. The only other review comes from a French blog. Let's make things a little easier by posting some examples. 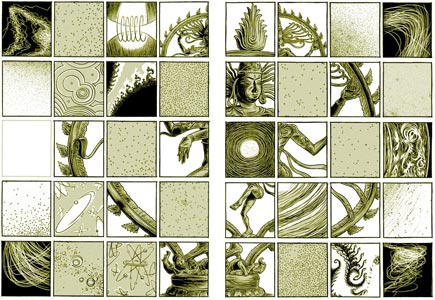 Alpha Directions is kind of like a BD History of the Universe that focuses more on the nature of evolution than history. While Larry Gonick summarized the startings of life and the Cenozoic, Mesozoic and Paleozoic periods in an impressive 50 pages, Jens Harder goes even further with 350 pages. And he's still not finished yet - there's supposed to be two more books in the series, with the last one going into the future. It's probably not spoiling things that the first book ends with the ascent of Man. 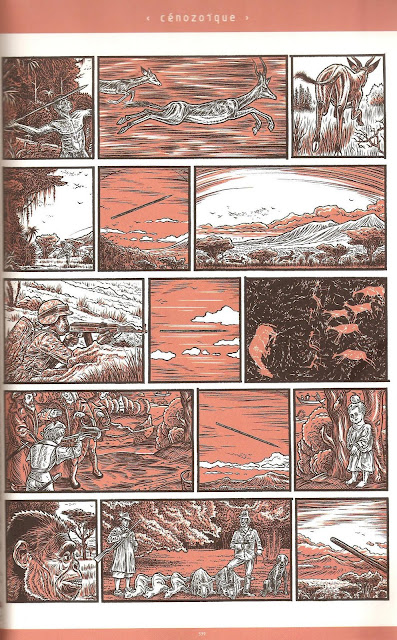 This is a visual tour-de-force that easily outstrips Robert Crumb's Book of Genesis. While that Biblical tome was impressively crosshatched and researched, the overall effects felt quite dull compared to the underground cartoonist's previous satirical works. Jens Harder goes the other direction, content to let his pictures tell the bulk of the story and only uses descriptive text sparingly. It doesn't hurt that he draws comparisons to mythologies and ancient theories of the universe, ranging from Hindu world on turtles to various woodcut paintings, Dante's drawings and even various comics. The range of varied drawings from serious to cartoonish is impressive. It's extremely reminiscent of Will Elder's "Chicken Fat" drawings in MAD Magazine where he would have multiple versions of an object in the background that didn't take away from the story, but made for interesting viewing. Furthermore, it doesn't insult the audience's intellect by putting connections between several seemingly unconnected visuals. Since this is a book that focuses on evolution of life on Earth since the beginning of time, it's inevitable that it eventually focuses on Dinosaurs halfway through. Debate continues to rage on what colour they were, but here this may be considered something of a moot point. While this book is in black & white, the colour is dependent on which period is covered in the book. It helps avoid feeling sick from a preferred colour scheme, which other cartoonists are more likely to stick to for the duration of the book. (I'm looking at you Joe Matt & Seth) 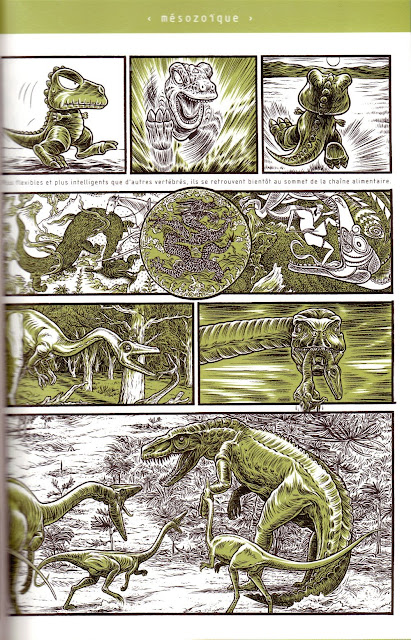 I'm wondering what the hold-up in translating this book for a wider audience could be. It was just recently released in 2008, and there's already a French version. Are there publishers waiting for the others to be completed before considering licensing it? Is there still too much of a stigmata on evolution for this book to sell in the U.S.? Is there already competition between comic companies over who’ll get the rights to distribute the book? Or more likely, are people unknowledgeable about this book existing in the first place? Whatever the answer is, not having this book available in English is a crime against education. This should be required reading for anyone interested in the formation of the Universe. I know that should it ever be available, I'll be among the knowledgeable few who'll reserve an early copy. 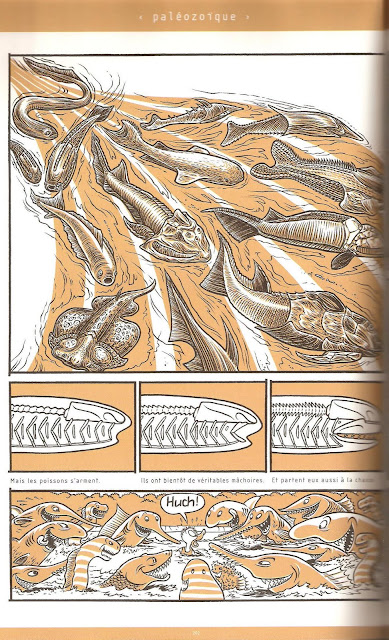