It seems the popular zombie comic The Walking Dead which was just recently made into a live-action show on AMC is considered being adapted into a video game. Obviously these people have never read this series. It’s likely they saw the ratings for the show and decided to cash in on its popularity. Problem is that the series isn’t exactly custom-made for a typical videogame experience. It’s nothing like House of the Dead where you navigate a corporation building full of reanimated corpses and bosses named after Tarot cards. Nor is it similar to the campy cult hit Zombies Ate my Neighbours. It doesn't even bear a passing similarity to the oddity Zombie Nation, where a floating samurai head shoots down enemy planes. (Nintendo games were weird)

When it comes to showing the results of reality in videogames, the results have been less than successful. Considering the bleak nature of the series, this doesn’t exactly sound like a solid recipe for an addictive V-game. (People have a tendency to die really easily) A typical setup would be something like this:

“Okay, I’ve just woken up from a coma and have no idea how long I’ve been asleep. Can’t have been that long, since I can still use my legs. This hospital is surprisingly empty. Where’s the nursing staff? And why’s this door’s barricaded?” 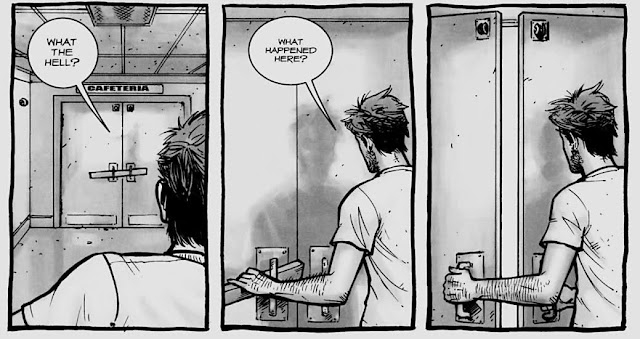 “Strange that they’d go to so much trouble to close this door and OH MY GOD, these people are seriously sick! Better close off this quarantine wing again!”

“Geez! One of the patients somehow escaped through when I wasn’t looking! And he’s walking towards me… very… very… slowly… looks like I have enough time to get back to my room to reacquaintance myself with how I use my handgun.”

“Okay, this handle locks the shells in place, and the underside reloads them, though I only have enough bullets to kill six of these guys at once. Why’d I tell myself that? I’m a sheriff - I should already know this. Oh, and the zombie’s managed to find me. Guess I should conclude my lesson by firing… waitaminute – I’ve only got six bullets. I should use something else.”

Use Bedpan?
>Yes
No

“Cool! A partner to help team up with me to blast away these zombies. Okay, let's go out and – LOOK OUT!”
(One bite and gunshot blast later)
“Don’t worry. It’s just a flesh wound. Its not as bad as it looks… hello? You CAN’T be dead! I’ve got a medkit and everything! And they’re coming again!”

Run Away?
Yes
>No

“The hell I am! You’re not dead, you’re just resting. I just need to get you to another hospital and – hey, you’re getting back up! I knew that – hey wait, what’s that look in your eyes – Get back!”

“My God, what have I done? No time for regrets. Better leave him behind for the hordes to feast on his still tasty flesh.”

“I’m NOT resorting to canabalism! At least not yet. Oh hey! There’s some more living people! And it looks like they’ve got a solid house that’ll stand up to repeat attacks! And my wife & kid’s still alive there! This looks like a wonderful community full of quirky characters who’ll support each other while we face against the next horde of -”

“What’s going on? Why’s everybody dying before the zombie's even getting here?”

“Let’s get outta here. This place’s too dangerous. Hey, here’s a prison facility that looks pretty well guarded. My wife and kid and the others who’ve followed me should be safe here -”

“Okay, one of the prisoners is a serial killer and -”

Serial Killer has left the party

“Well, that’s one less threat to worry about. Now we just have to worry about the zombies and supplies and – being held at gunpoint.”

Stall for Time?
>Yes
No

“Whoa! Hey pal, no need to overreact. I’m not looking for trouble. We’re just looking for a safe place to - OW, my hand! Okay, we’ll go sit with the rest of the hostages.”

Use Handgun?
>Yes
No

“This would be a good time to develop my marksmanship. I haven’t shot anything in five minutes and I’m feeling rusty. Too bad my index finger’s bent out of joint and they stole all my ammunition.”

Talk to Wife?
>Yes
No

I don’t know how much more of this stress I can take. It’s a good thing you’re here. I can count on you to be faithful to - hold on, are you pregnant?”

“How did you get pregnant without me? Waitaminute – tank? What do you mean we’re at war against a rival camp? I thought we were gonna be shooting zombies and stuff!”
(Huge explosion rocks the prison)

“Oh god, I’ve just lost everybody I ever cared about. I’m so alone…”

Put shotgun in mouth?
>Yes
No