Tell me a Story

I've been reading The Storyteller, the recent autobiography of renown children's author Roald Dahl. It's full of interesting tidbits about his life, sure, but more importantly, it gives side-by-side comparisons of the stories he was most well known for. When your best impression of a favorite writer is the stories they've done, its best to familiraze your audience with their works. Especially if you've never read their earlier works before. I'll have to admit that I've never read his previous memoirs, since they were much more serious than his lighter fare.

For somebody who was a beloved writer, he could be a rather pompous jerk. Indeed, near the end of his life, he had alienated almost everybody around him and had few friends left. Not to mention that his output had become a shadow of its former self, being regulated to short stories and silly rhymes. In a sense, the lighter his literature became, the darker the man became. It was a kind of reverse-Dorian Gray thing. His later works were chipper and youthful while the author became crotchy and unfriendly.

EDIT - it was only after finishing the book that I was surprised to find out that the books Revolting Rhymes and Dirty Beasts were published before he gained his reputation. Those rhyme books were later reprinted with Quentin Blake's artwork, which led me to think they were recent publications. His last children's book Matilda burned him out from producing any more novels, and forced him to focus on shorter stories of which he had an abundance of. (The story of Matilda's original conception was so far removed from its final version is a story in itself) I was reluctant to correct this glaring oversight, because as the man said; facts always get in the way of a good story.

Finding out the truth behind his history can't have been an easy task, considering how much material was left behind. The task was originally assigned to his younger daughter Ophelia, but when she got pregnant in 2006, she asked Donald Sturrock to contribute. It took four more years of research before the autobiography was finished.

The fact that somebody became good friends with him in his later part of his life and was willing to work with his notes is nothing short of miraculous. The fact that Donald Sturrock interviewed him for a BBC special presentation back when children's writers were seen as less respectable than modern-day novelists is more of a happy coincidence.

His personal memoirs in Boy and Going Solo were amazingly honest and told with a down-to-earth sensibility. They were also rife with innacuraties that differed from what actually happened. Some of them were even based on his earlier stories that were superimposed onto his exploits. Furthermore, he would contribute outlandish trivia without checking to see if they were true. When it came to his personal life, he never let facts get in the way of telling a good story. An ordinary kitchen knife could become his grandfather's trusted heirloom handed down through the ages. 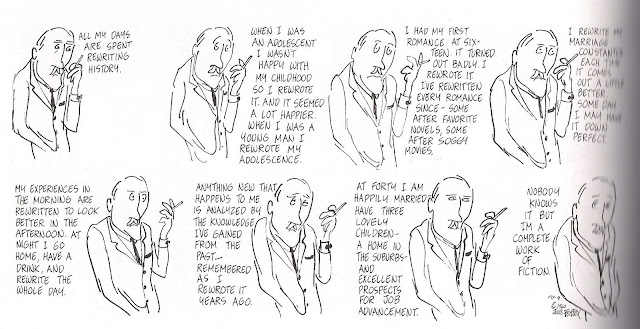 The autobiography makes a considerable effort to find out which tidbits are made-up, and the underlying reasons why they were rewritten in the first place. While most biographers would resort to a deep-seated Freudian explanation, Sturrock manages to back up his claims by providing actual evidence.

In the end, people will either find the revelations behind the Dickensian stories to be explanatory or a passing fancy. Normally we don't want to think about the stories behind stories - we're more interested in the first versions we hear than think about their history. For others, they're curious about the influence behind the creator's lives and how it shaped their worldview. This book is dedicated to those historical truth-finders.

The main reason for this post is this comic below. It's well known that Roald Dahl didn't start to gain any success until he branced out his more adult stories and started aiming for a younger audience.

You too can write wholesome entertainment for the whole family! Just don't sugarcoat your stories too much and watch your audience swarm in! (That's the theory anyways) The real formula is not to treat your potential audience as intended idiots and give them something they'll find worth reading.
Posted by DeBT at 9:24 PM