It seems that when it comes to fantasy titles, Aria is a popular name that's used worldwide. However, each country's use of the title is as different and varied as the country they came from. For the sake of simplification, I'll be summarizing each different Aria from my first impressions of their first stories alone.

The first and most well known Aria is of course, the slow-paced Manga Aria. 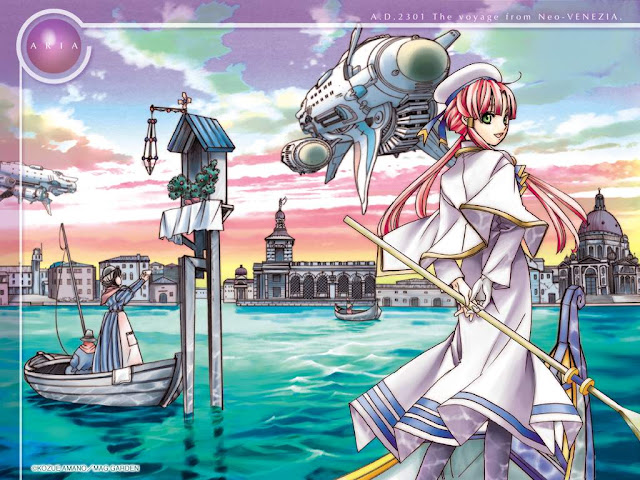 It's about a water based world where gondoliers called Undines ferry their customers across a Venice-like waterscape. Even though it's based on the future of the 24th century, it could just as easily take place two centuries ago, with no lack of technological innovations involved. 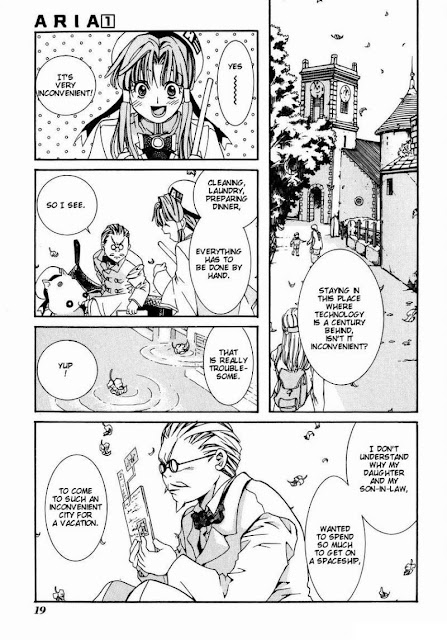 It's been compared with Yokohama Kaidashi Kikou in terms of idyllic setting and the lack of a world-threatening plot. The fact that it's more of a relaxing read than a pageturner may explain why despite critical exclaim, it hasn't set the reading world on fire and its scheduling releases have slowed to a crawl of one volume a year. 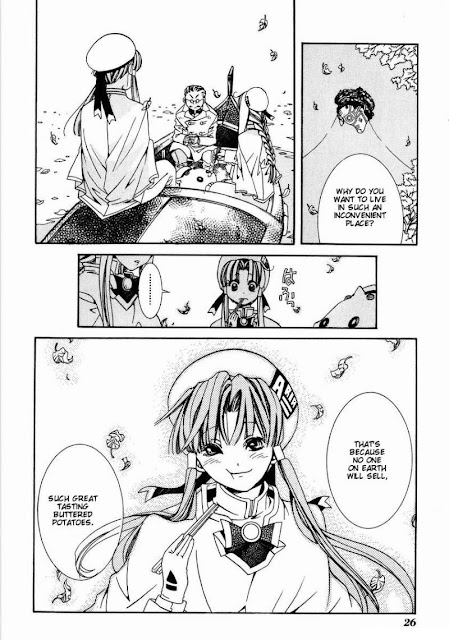 In fact, Aria isn't named for the main character Akari, but rather the company she charters for. It's also named after the owner who's a chubby cat-like creature that rides the gondolas all the time. (Don't ask - it's one of those things you need to take with a grain of salt to swallow your suspension of disbelief) 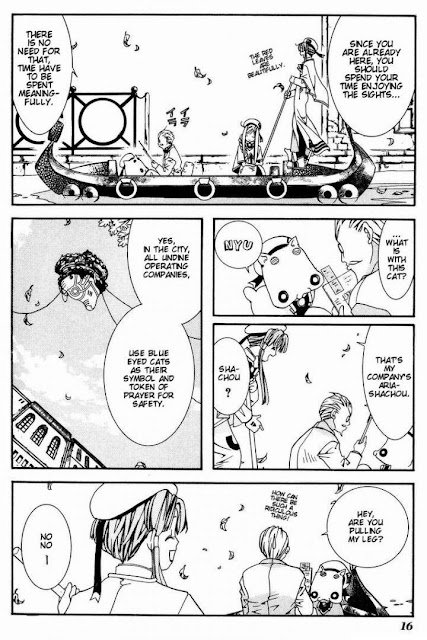 To further confuse things, there's also a recent Manga magazine named Aria as well. This magazine is aimed at mature woman than the usual Shojo audience that's usually targeted. I haven't seen any scanlations of the titles listed so far, but would be interested to know what they're about. 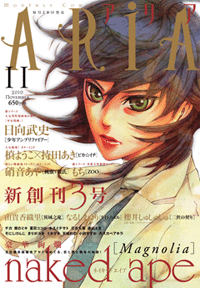 The American Aria is another beast entirely. This Aria from Image Comics is about a mystical creature living in the real world. Only she's a cynical woman reduced to selling tarot items and giving advice at a magic bookstore. 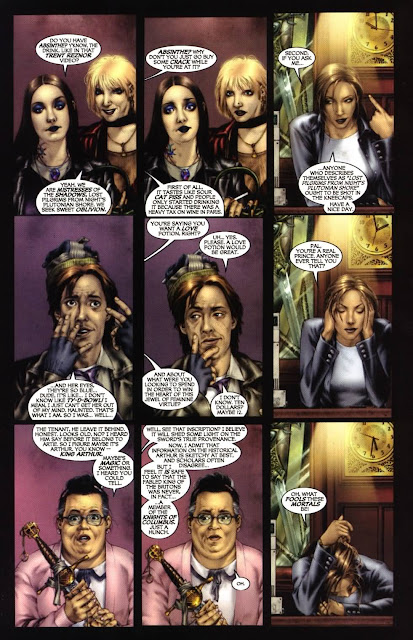 I suppose that's a politer version of saying "Gads, these people are idiots!" But then it wouldn't sound Shakespearian would it? The basic plot is of a recent dark force from the mystical lands threatening the fae folks that wants to come over to the other side by murdering people and blah blah blah. It's nothing that hasn't already been done multiple times already. If it wasn't for the occasional burst of humour, I wouldn't have bothered. 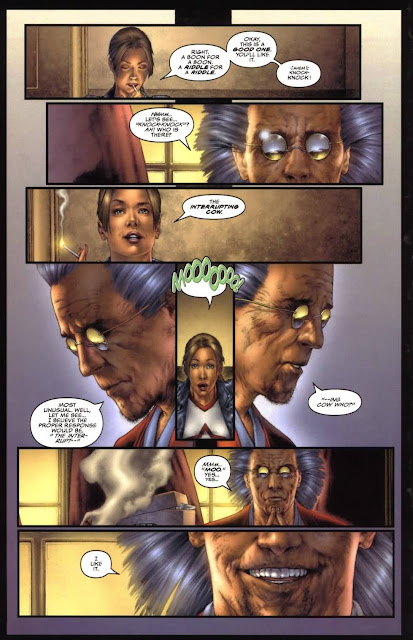 Since this, (and two other spinoffs) were limited to four-six issues at most, and with the stiff ultra-realistic art that hampers the condensed storytelling, I can't really approve of this comic. 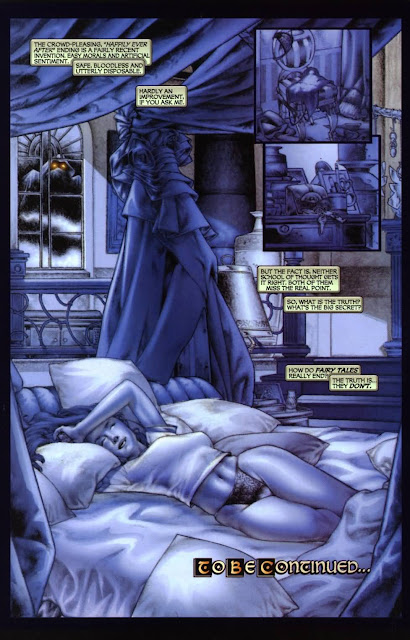 Lastly, the comic that I really wanted to talk about that I found in a secondhand comic store, and was translated by the now-defunct Starblaze Graphics is Michel Weyland's Aria. 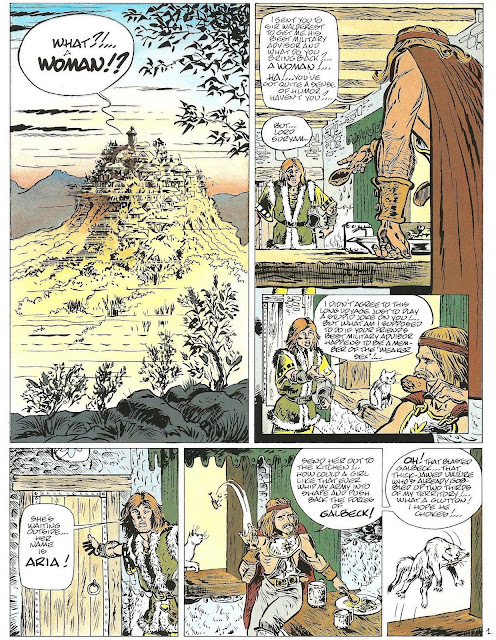 Serialized in Spirou magazine, it's about a spunky woman in medival times lending her military expertise to whoever requests her services. Despite her scanty white garb, there's hardly any panty flashing or sideboob as would be expected from someone wearing such a skimpy outfit. Rather, she relies more on her cunning to overcome her enemies. 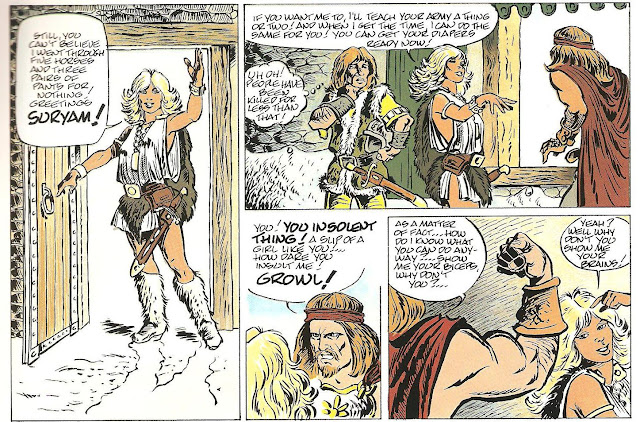 The heads of the camp, not trusting their newest advisor decide to test the limits of her ability by having her train the lowest ranking soldiers in their army. 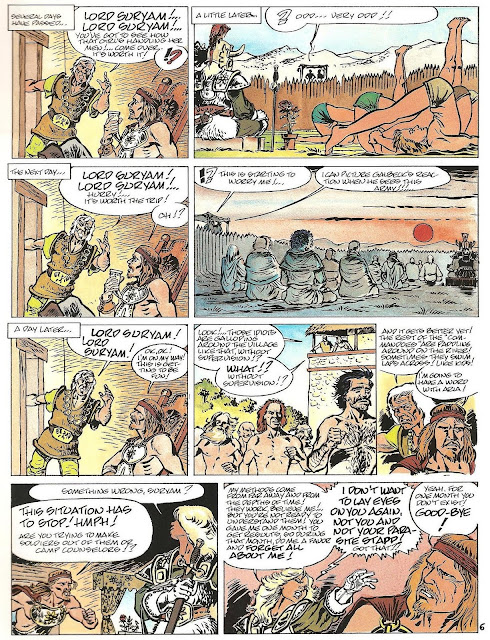 It isn't until she's forced out into a mission to take over an enemy outpost that we get a chance to see her tactics in action. Of course, in order to be taken seriously, she's all decked-out in full armor, natch. 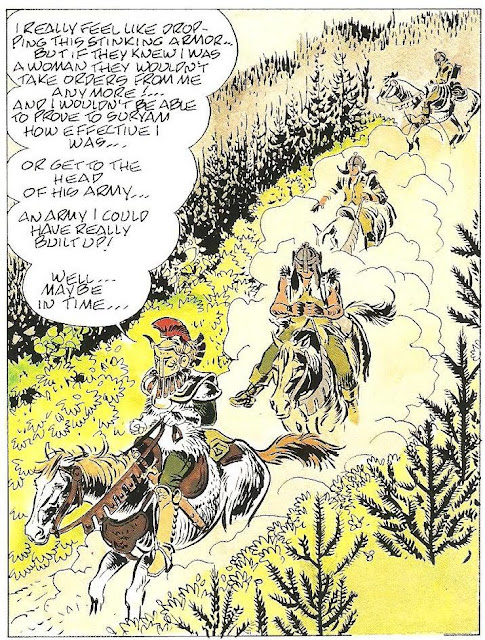 It's only after encountering a ruined village and surveying the survivors that includes an old man and a young kid that she initiates a plan to infiltrate the enemy camp by herself, leaving her soldiers on standby. When she's alone with the two civilians, she reveals her true gender in front of them, amazing them further. Then she reveals her plan to them giving them hope of getting revenge on the soldiers that destroyed their home. Naturally, we don't get to see her plan, just see in in action, since if we heard it beforehand, it would be subverted or ruined somehow.

With the two civilians, she approaches the enemy gates posing as a lost family looking for shelter. Because of her unnatural beauty, Aria is immediately chartered to Galbeck's main headquarters. The general decides to have some fun with her until Aria reveals she's a priestess of a religious cult which transpires predictable results: 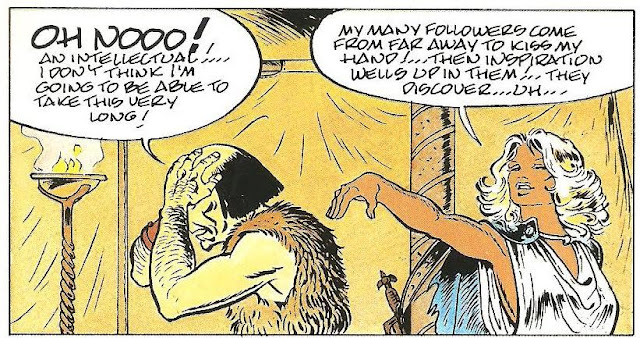 Obviously not a lover of missionaries, Galbeck allows Aria to parade her nonsensical verses around camp, allowing all the guards to kiss her hand as per custom. After which, she's imprisoned in the slaves headquarters until dawn.

Come the next morning, Galbeck arouses his soldiers with an inspirational speech, that's remarkable for its lack of fanaticm. Apart from badmouthing artists and intellectuals, it's entirely stripped of symbolism. 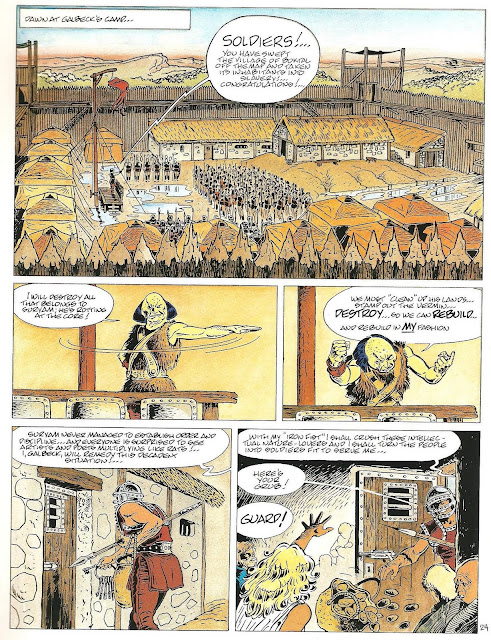 Halfway through his speech, Galbeck notices that one of the prisoners' just escaped, and started acting like a lunatic. 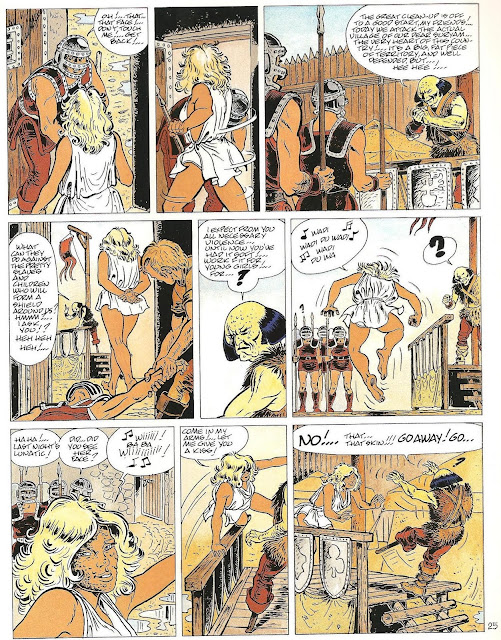 The old man who was travelling with Aria tells the soldiers that she's infected with a contagious madness disease that only shows its warts during days of the full moon. The only cure is to fast themselves for a week, lest the symptoms begin to show. Half the soldiers don't believe him, while half begin to panic, feeling the effects already. In order to preserve themselves, Galbeck holds off his planned invasion for a week, while planning to incinerate Aria before she infects anyone further. After a rather tasteful bondage scene, Aria counters by showing surprising lucidity for someone in the throes of madness. 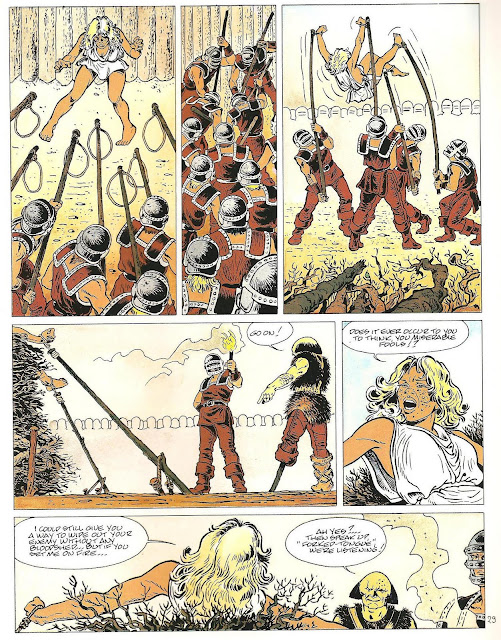 Aria tells Galbeck that he could easily use her against the army he's planning to invade. Seeing wisdom in her words, Galbeck has Aria locked up in quarantine while his soldiers go to bed to wait out the effects of the nonexistent virus. It's only while alone in his tent that Galbeck begins to doubt the doctor's prescription. After all, the only verdict came from people outside his camp, and when your only source of information come from one outlet, that's when you should start displaying your doubts. Unfortunately, it comes too late for him, as realization comes from Aria's sudden escape, which leads to this anachronism. 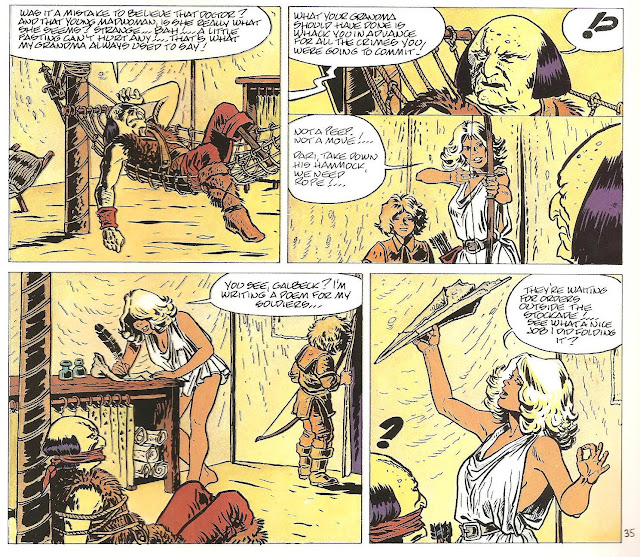 I doubt parchment has any aerial ability even when folded, but I'll allow it for the sake of the story. 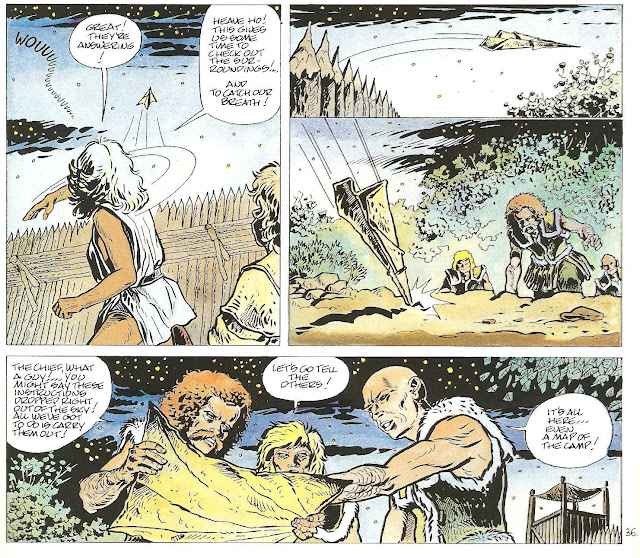 Weakened and caught unaware, the enemy garrison is easily taken over and burned to the ground without any bloodshed. There's some loose ends followed up upon Aria's return to the village, and revealing her true form to her loyal soldiers, but this seems like a good place as any to end my summary of the first album. 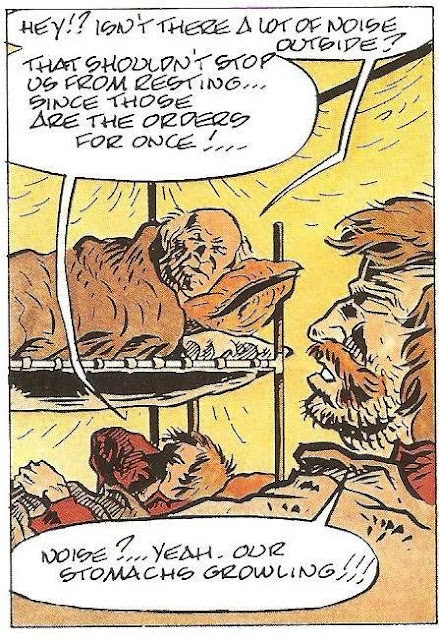 There's apparently six more translated books of this series that I haven't been able to find anywhere. Starblaze Graphics also translated the first Thorgal volume that hasn't been re-released by Cinebook, who's done the more reasonable route of releasing two volumes at once for the first six books. Not buying that translated Thorgal volume when I had the chance is something I regret, since Thorgal is more sophisicated than Conan, but just as cruel.

Aria could be considered a medival Wonder Woman, only without the gimmicks that the Amazon is well known for. There's currently 32 albums of the series released since 1982, and shows no sign of stopping. 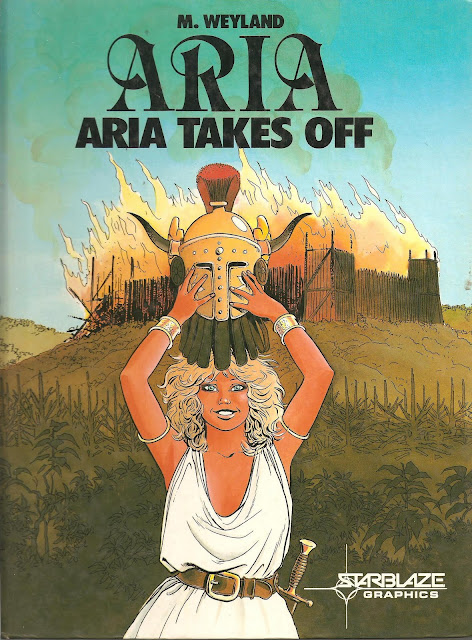 EDIT - I forgot to mention that the reason Aria is free of obvious fanservice (save for some brief casual nudity in later albums) is because it's a husband and wife team. Like the creators of Girl Genius and Miss Don't Touch Me, it's a collaboration between two people. While Michel handles the main art, Nadine takes care of the colouring and story. For a comic that's about the overlooked history of woman warriors, forgetting her contribution was an ironic oversight on my part.
Posted by DeBT at 5:39 PM