It’s only a few days into the new year, and already there have been some exciting announcement of comic licenses in the foreseeable future. First up from Fantagraphics, on the heels of Floyd Gottfredson’s Mickey Mouse comics (think Mickey in the realm of Tintin adventures), would also reprint the collection of Carl Barks’ Duck comics. Hopefully we’ll be able to find out the meaning behind this panel here. For anyone who’s grown up reading the adventurous stories of Donald & Scrooge, this is a long overdue boon. There WAS an affordable version available years ago, but it was outrageously expensive, and only pandered to serious collectors. Amusingly enough, there are commentors who’re dismayed at the news that the Disney comics would be reprinted at a slightly smaller size than usual - at 90%, rather than 50%. As Gary Groth said, the cartoony books are easier to read in reduced form than stories with more realistic art & tiny text.
This is a welcome respite, since the only reliable spot for reading Disney comic masterpieces was on a dedicated fansite that reprinted everything Carl Barks, and his self-notes successor Don Rosa did, along with some of the aforementioned Mickey comics that was released by the now-defunct Gladstone comics line. Surprisingly enough, even though it was announced at another comic news site, the company in charge of the announcement has a notoriously bad job of tooting their own horn. Nowhere on Fantagraphics page or blog is their acquisition of the Donald Duck comics even mentioned.

On another welcome note, the webcomic Minus will be released in book form. (Many thanks for GastroPhobia’s comments page in pointing that out) 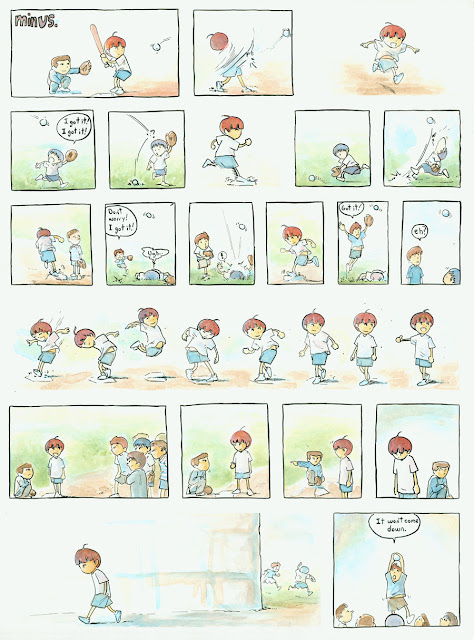 For the longest time, it was compared to Calvin done in watercolours. Ever since Bill Watterson retired, cartoonists and readers have been trying to reclaim the kind of imagination and creativity that was lost in the comics page. Some comics have attempted to capture that using the old axiom of a child & their animal schtick, but Minus really felt like a child’s comprehension of manipulating the world to their whim. After a few years of experimenting with the format, the creator like Watterson decided he’d had enough and unlike the reclusive cartoonist, expanded on to other projects he was more interested in.

Another noteworthy release that’s been lamented by the indefatigable Mike Sterling is a collection of Sugar and Spike. 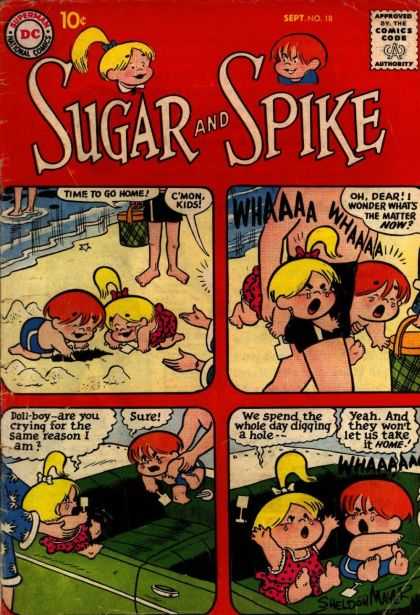 Sugar and Spike is about two babies who can communicate with each other, and unintentionally getting into trouble. I dimly remember reading a digest collection years ago, and thought it was charming. It seems like the kind of thing that children of all ages would enjoy. Sadly, the publisher seems to be aiming at the adults who fondly remember the series and is overpriced accordingly.

Another book I’m greatly looking forward to is Carla Speed McNeil’s Finder books. I only found out about her work when it was briefly mentioned in Scott McCloud’s Reinventing Comics, and a few brief pages on the old Scansdaily site. It wasn’t until I purchased the omnibus collection of Sin-Eater (at a reduced size, natch) that I could really appreciate her work. I had to read the story twice to better understand what happened, and the notes at the back (which highlighted the unsaid things better) helped a lot. 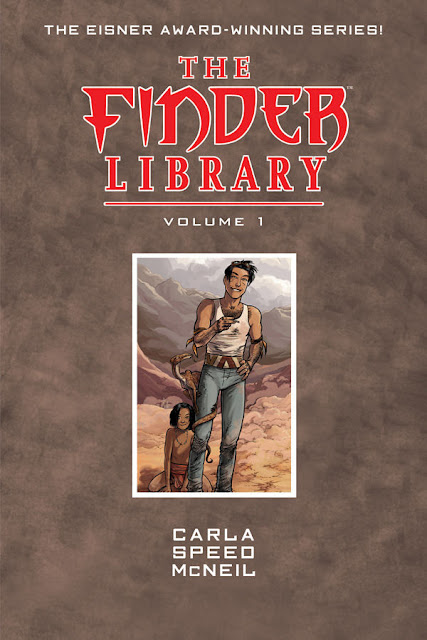 Although she stopped releasing her books through the Direct Market and started going the Girl Genius route of publishing her comics on the web and gained more readers from it, I couldn’t work myself the enthusiasm to read the newest stories. I was still ignorant of the past stories she’d done before and wanted to read those before going on the the latest ones, even though they didn’t need to be referenced beforehand.

When Dark Horse announced that they would publish the Finder series, I was wary, since DH has a bad reputation for delayed shipping late books. What surprises me is that Dark Horse would release the newest Finder book before the older Finder stories. Even though the Dark Horse version will re-collect the comic I already have, I don’t mind. It’s good enough that it warrants double-dipping.

However, the one comic I’m most looking forward to is the last collection of Technopriests. 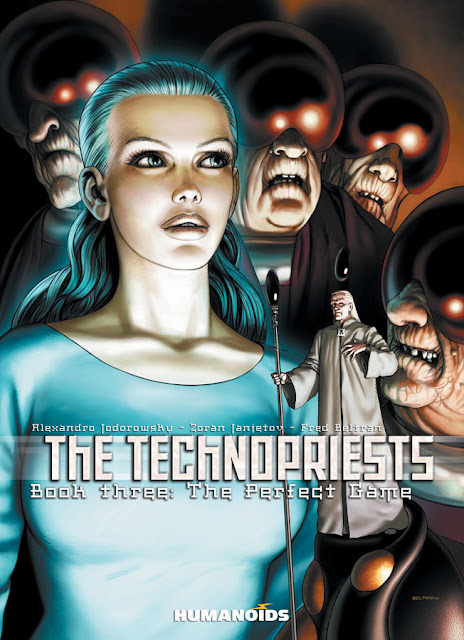 The last omnibus collection that was released was in 2004, so it’s been a long wait from the penultimate book to the grand finale. The only fault is that it’s more expensive than the first two, and with a lower page count. Judging by the wait, it’s possible they compensated for inflation.

Technopriests is about an ancient albino reciting his memoirs of what led to him leading his guide of 500,000 followers. Mere words cannot fully describe the inherent insanity this title provides, it has to be experienced to truly appreciate it. This page summary should give you a good idea. The disasters they go through may seem perfectly normal at first, until you read the last two penultimate panels: 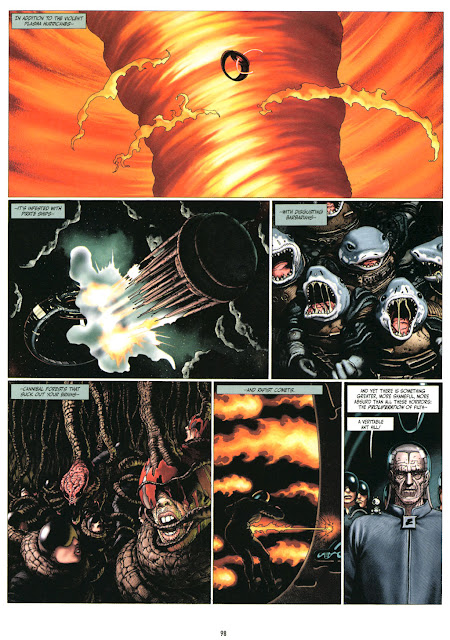 This isn’t even the most ridiculous thing that happens in the series. Albino is such a Mary Sue figure who’s constantly getting himself into dangerous situations at every turn; and getting out of said cliffhangers by using his zen-like wits and various mind-bending hacker powers whenever the plot suits it.

The plot? Ah, that would be Albino wanting to join the Technopriest guide so he can design video games that’ll have a lasting influence on humanity. If this were a Manga, his tagline would be; “I want to create the best video games in the universe!”

Trouble is, the instant he sets foot in the gaming world, he’s less than enthusiastic about the realities of the workplace. It’s not all fun and games, and the ethics of his bosses are suspect. This is possibly a reflection of the writer’s unfortunate encounters with the politics of videogame designers. To counter this, Albino decides that he needs to change the workplace from within to create the kind of imaginative games he wants to create, and not the mindless games that’ll keep the customers in a dull stupor. As a result, he continues climbing up the ladder of success, going deeper and deeper into the corrupt world of profit and merchandising. Throughout his continuous rise through the ranks, he’s constantly confronted with an alien bureaucracy that wants to infect him with their sick thoughts. 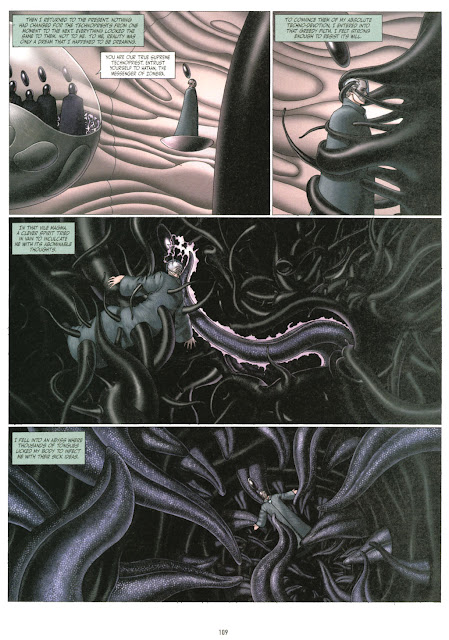 It gets so outlandish in its descriptions that you can’t help but laugh at the sheer absurdity of it all. On the other side of the story is the adventures his mother and the rest of his family went through while he’s focusing on videogames. Like many stories, this one is inspired by revenge.

His mother was a priestess of a golden temple until three pirates of varying skin tones, one white, one grey and one red, invaded her holy grounds, razed the place to the ground, and raped her. When she gave birth to three babies who resembled the pirates in flesh tone, she vowed to raise as much funds as she could to create an army that would cut the pirates’ testicles off. In fact, a lot of what happens in Technopriests is inspired by revenge. Allegiances and roles are constantly shifting so that one person may be on top of the world one day, and then be forced to clean the toilets the next. In fact, toilet-cleaning seems to be a popular punishment for whoever’s in power. 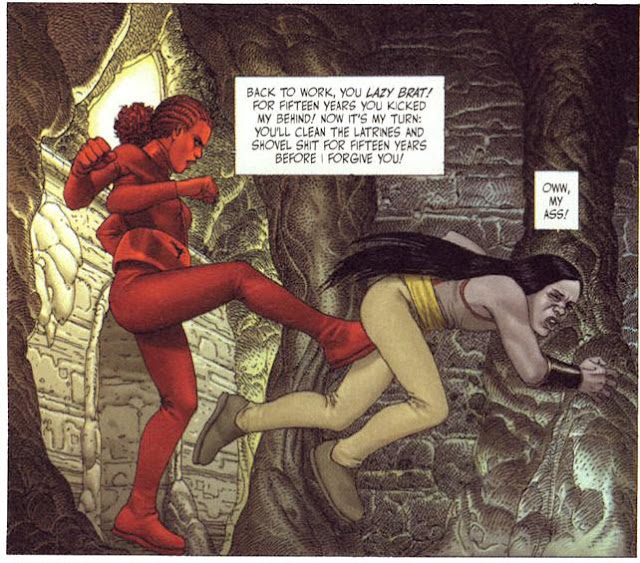 Can you tell that this comic is one of my most guilty pleasures?
Posted by DeBT at 6:19 PM