Playing a little catch-up with this piece of news, since I'm not a sports fan, but thought this was too good to pass up.

With the Soccer World Cup coming to a close, fans were reaching a fever pitch. The further certain countries get into the finals, the more superstition rises with each remaining team. One such noteworthy superstition was Paul the Octopus. 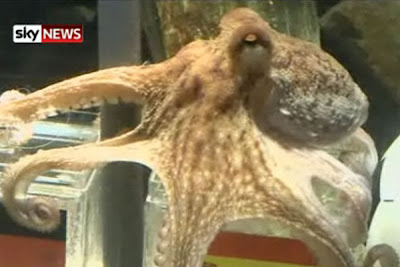 Cute little bugger ain't he? The usual ritual was to put a piece of food between two different cases, each one portraying a different country. In previous meals, the octopus generally favored Germany. So it was a great shock when he favored the container representing Spain instead. They should've chosen something more to Paul's liking if they were worried about the results. Ironically enough, the last time Paul chose Spain, Germany won. This led others to hope that the outcome would be the same as last time.

It wasn't. On the day of the match, Spain won the day with an exciting 1-0 game, which is par for the course for Soccer games. This led to baffling cries of "The octopus was right!" to anyone who wasn't in the know.

This in turn led to the psychic octopus getting death threats and songs baying for his blood(?). Which led me to wonder what kind of lyrics could be considered anti-molluskic? After all, these creatures are already considered ugly - what more could we say that'll make them sound worse? The closest I can think of is the following to the theme of "Alligator Pie".