Here, Have a Balloon

I wanted to post some further commentary on this post that talked about the visual language differences between Western and Japanese comics.

Some people think that Western comics are more cinematic, but I think Manga is more movie-like, given how much of their work is like reading storyboards in comic form. The Shojo elements that are so pervasively common are elements that Movies used to have, such as Fade-ins, overlapping images, metaphorical imagery (flowers being the most common), which have all been lost with time as movies have moved away from subtle camera trickery into the realm of cool explosions.

In fact, regarding terms where the images in a comic can be used as visual metaphors, the closest I think come close are David Small’s Stitches, and David B.’s Epileptic. (Is it a coincidence that both authors’ autobiographical comics have the same name? Granted, the latter had his changed, but still…)

A popular staple is to have a character’s face blown-up in a larger format in front of the character. Also, it’s not unusual for Manga to totally ignore the 180 degree rule, and show both characters facing away from the camera, and seeing their facial expressions simultaneously. (An example would be seeing the character’s backs as they see a horrific event, and seeing their faces in a faded image above them) I’ll try to find a relevant page later if I can.

What I wanted to expand my commentary on was the usage of speech balloons.

Originally, I wanted to point out that iconic staple of Manga - the silent thinking balloon. Everybody’s seen these, right? Where a character will be standing around, thinking about nothing in particular. This was popularized with Golgo 13, who had whole dialogues of nothing but “...”, “.....”, and “........” if he was feeling particularly emotive.

When this trait was recently adopted by Western comics, I felt vindicated, that Manga was finally beginning to make inroads and become recognized. However, there were essays on how American comics (particularly S-hero comics) were essentially allergic to any thought balloons. I was going to post some Manga examples of how they tended to think more, but then noticed that a Manga character was just as likely to say "..." as they were to think it, so my arguement was already shot down before I could make a case for it.

Very often, when I was reading American comics, and there were text-boxes of narrative, I often glossed over them just to read the dialogue, to get to the real meat of the story. Oftentimes, I felt the boxes were slowing down my enjoyment of the comic, and weren’t giving me any information I needed to know. And oftentimes, I would be right.

What I wonder is why, if they need to use narrative, can’t they use the Manga equivalent of floating text instead? It was used to great effect in Death Note, and other comics with little to no confusion to who was doing the thinking. Alternatively, when narrative IS used in Manga, it gets put in text boxes as well, but it doesn’t feel as intrusive or distracting. 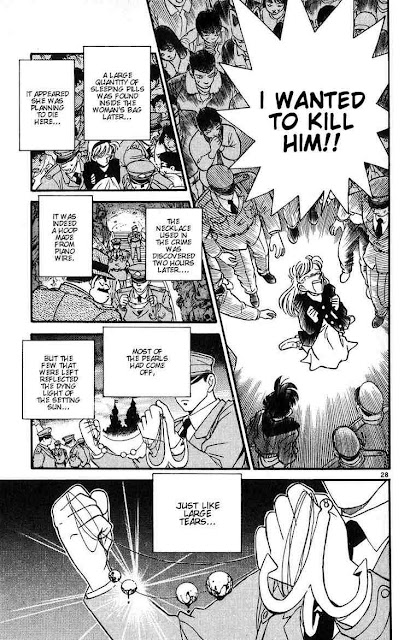 What I DO find distracting in Shojo Manga is where a character will be thinking in the midst of recalling someone’s conversation. (This confusion can be compounded if someone’s talking while they’re thinking.) Even though it’s easy enough to tell the two apart thanks to the difference in the bubbles, it can break the flow somewhat. In these cases, it might be easier to read one set of bubbles, then go back and read the other. Of course, you lose the state of mind these characters are going through, but my point’s been made. 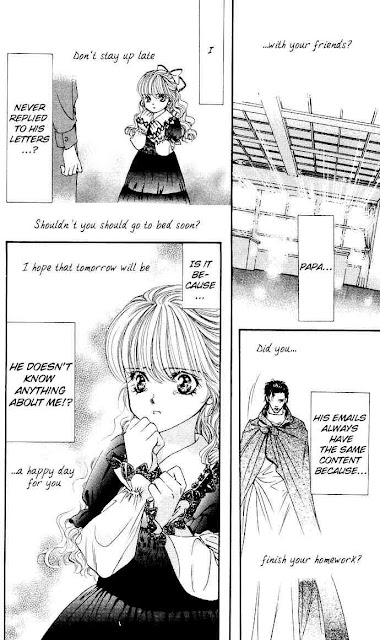 One other thing that separates Manga from Western comics is their willingness to be experimentive with their word balloons. It’s not unusual for a word balloon to take up half a panel, only, rather than take the room above, they move it to the side so that the character’s cool hair isn’t obscured. Another popular option is to make the balloon partly transparent so that there’s a faint outline of a balloon within the character’s body. With Western comics, the preferred usage is having the balloon over the character’s head. (Newspaper comics might be to blame for this)

Also, compared to Manga, which uses lots of white space for their balloons, Western comics are practically claustrophobic. It’s as if they don’t want to waste any space on the art that they’ve worked so hard on, that they’re afraid of letting any intrusive text get in the way. So they cramp as much words as possible into a tiny balloon to be as unobtrusive as possible. I’m constantly reminded of the coloured Marvel version of Akira, which replaced ALL the large balloons with smaller cramped balloons to appeal to Western comic fans. How they were able to replicate Otomo’s detailed artwork is a mystery to me. 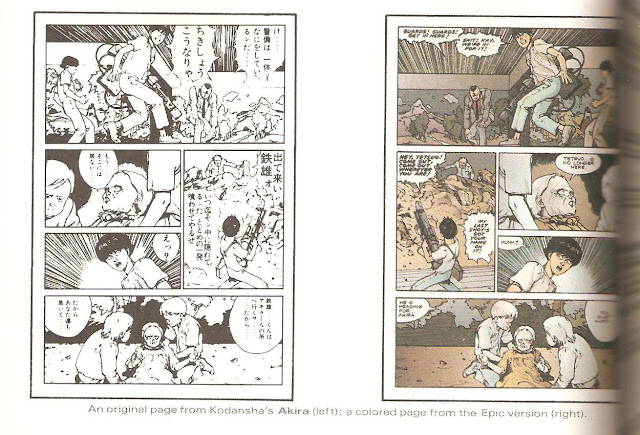 People may have complained about the usage of the transparent balloons in the Twilight Manga, but it’s a slight adaption of a technique widely used in Shojo Mangas, where the characters are visible through the speech they use. 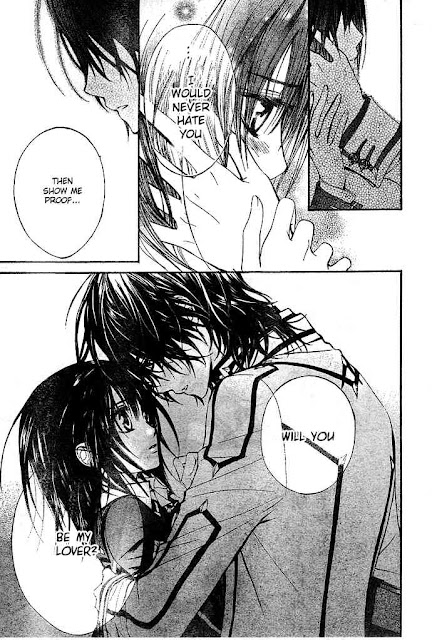 Of course, it’s more successful in Vampire Knight than Twilight, probably because the Japanese have had more experience with this kind of thing. It’s not unusual for Manga characters to occupy the space where their thoughts will go. The difference is that unlike Western comics, which can be insecure about covering up the pictures, Manga has found a reasonable halfway point that allows both the text and art to be seen simultaneously without one infringing the other. This sort of thing must come as a bit of relief for the artist who painstakingly works hard on the page, and not have to worry about which bits should be covered up. A normal artist would think of using the blank space in the upper hand corners for the dialogue, but the text wouldn’t have that same emotional punch if it weren’t within the characters themselves: 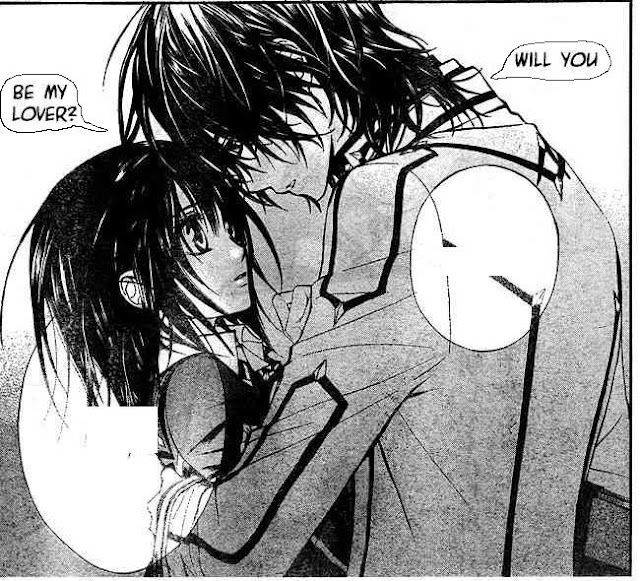 Something else I noticed about Manga balloons - they can change depending on the dialect. Most balloons are vertical, which makes for easy vertical reading. But if a character is American, their balloons will be horizontal. Here’s a few select examples from Genshiken. 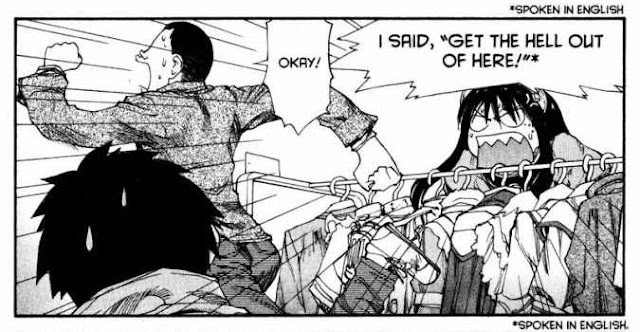 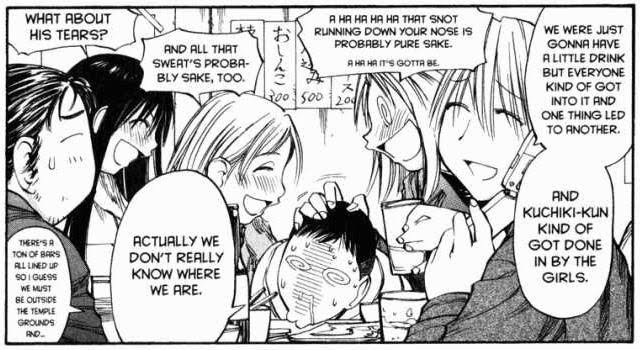 As an aside, I’ve always had trouble reading any of Joe Sacco’s works, because his comics make me sick. It’s not the subject material (which I might find interesting), it’s the text boxes. They’re constantly swaying from one side to another, and the overall effect makes me seasick. (Or at least as seasick as I can get from reading a comic - I’ve never actually gone on an ocean voyage.) 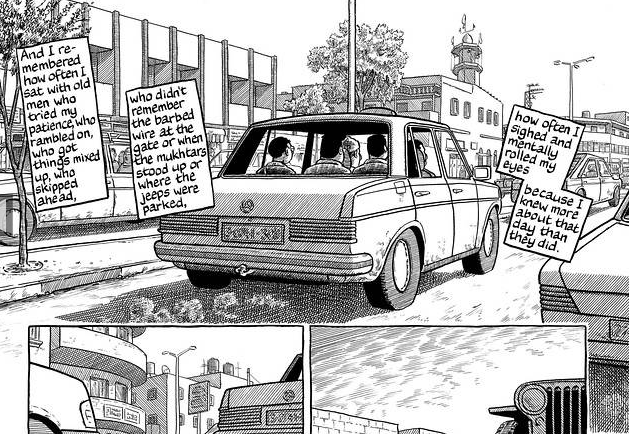 EDIT - Here's another example where the text boxes are at odd angles, yet for some reason, the speech balloons are perfectly still. 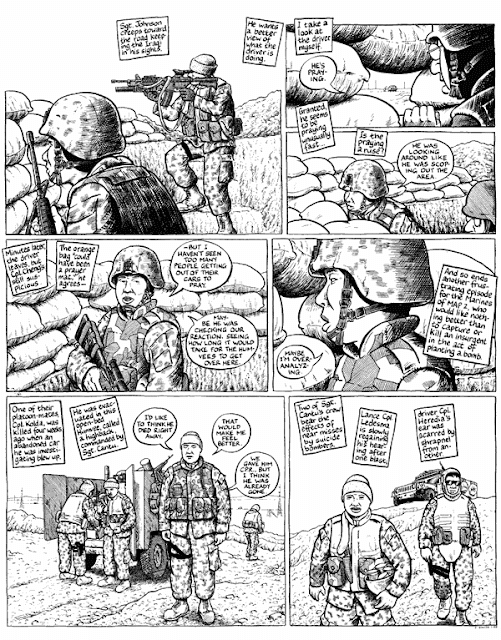