NBM just recently announced a licence that I’d long been expecting - The Smurfs are finally coming back in English form. I made a few comments of appreciation of my own at the following site here.

As Dorian noted, “The Smurfs is coming out on DVD, but the original comics are still not available in English. This disappoints me.” Well, it took three years, but it looks like they’ll finally be able to reach another generation of readers again.

The only fault is that for (maybe) obvious reasons, the first book, The Black Smurf will be renamed (and recoloured) as The Purple Smurf. Probably to aim for the nostalgic fans of the cartoon which also featured Purple Smurfs, but more likely to appease any angry criticism from certain circles. 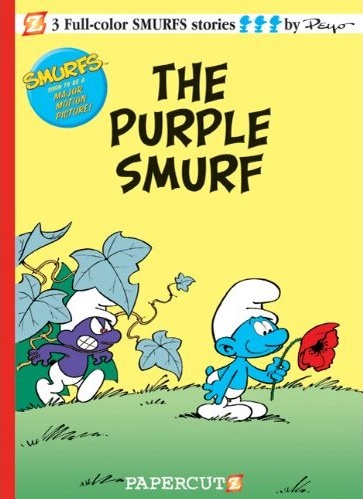 At least they’ll be releasing multiple stories per book, which makes me a happy customer. The earlier version, released by Random House only put out ONE story per book, which led to some rather uneven page counts, since they were essentially chopping the European versions in half. (Strangely enough, the French versions of Calvin & Hobbes were cut in half as well, so it’s not just a localization thing)

I was never able to read the Black Smurf in english. I even read the origin comic, The Magic Flute staring Peyo’s other creations, Johan and Pirlouit. The only Smurf titles I recall reading in English were:

King Smurf - While Papa Smurf is away, the remaining Smurfs develop a Monarchy in his absence... with disastrous results.
The Flying Smurf - A Smurf has dreams of flying, and is determined to find a way to do so, even if he has to annoy every Smurf he steals... borrows tools from.
The Fake Smurf - Gargamel turns himself into a Smurf to find the elusive village, despite not knowing where the village is, let alone what kind of Smurf name he’s supposed to be. (Fakey Smurf would be too obvious)
AstroSmurf - A Smurf has aspirations to go to space, and when demoralized at his inability to do so, the other Smurfs devise an elaborate deception plan to make him feel better.
The Smurfette - probably the most successful of Gargamel’s plans to destroy the Smurfs, by implanting a female element into the fray. Of course, his interpretation of Smurf beauty is pretty far off the mark, and the trouble only really begins when Papa Smurf gives the Smurfette plastic surgery to stop the rest of the village from picking on her.
The Smurfs & the Howlibird - a Magic Potion gone horribly wrong is disposed of improperly, causing a horrific mutation on an innocent baby chick who is somehow able to reverse-engineer the origin of said potion that made him a monster.
Smurf Versus Smurf (Smurf Green & Green Smurf) [also known as Smurf of one and Smurf a Dozen of the Other] - a parody of the use of the Smurf language. Is probably more identifiable by Quebeckers in their never-ending English/French debate.
Smurphony in C - Harmony Smurf unwittingly makes a deal with Gargamel to make actual music that will swoon his fellow Smurfs over... literally.
The Egg & the Smurfs - The Smurfs find an egg that, upon tapping it, grants any wish they want. Hopefully, Papercutz won’t have much of a problem when one of the Smurfs wishes another Smurf to hell. (Yes, this actually happened - the offending Smurf made the cardinal sin of standing in line too long to make his wish)

Hopefully, they won't forget the one-page joke where Jokey Smurf painted himself up as a Black Smurf as a foolish prank, scaring the bejezus out of everyone, until Brainy Smurf (in a surprisingly useful role) reminds them to find the antidote. At which point, Jokey Smurf goes from Gnap!-ing mode to sticking his tongue out with his thumbs in his ears and walks away laughing... only to hear Painter Smurf ask what happened to his indelible black paint.

Of course, it’s understandable why they would change the colour of the Smurfs. Just look at Tintin in the Congo to understand the kind of controversy it generated. Yet, I grew up reading that story, and never encountered any kind of racist thoughts. I’d argue that reading these kind of stories make us more open to black people, not less. After all, white humans get caricatured in every possible permutation in the comics page - why shouldn’t black people have just as many twisted features? I say keep experimenting with as many possible interpretations and find one that works.

When I see this kind of news, I'm reminded of the portrayal of the Oompa-Loompas from Roald Dahl's Charlie & the Chocolate Factory. Of all their portrayals of the little men, it's my first rendition that's stayed with me the strongest: 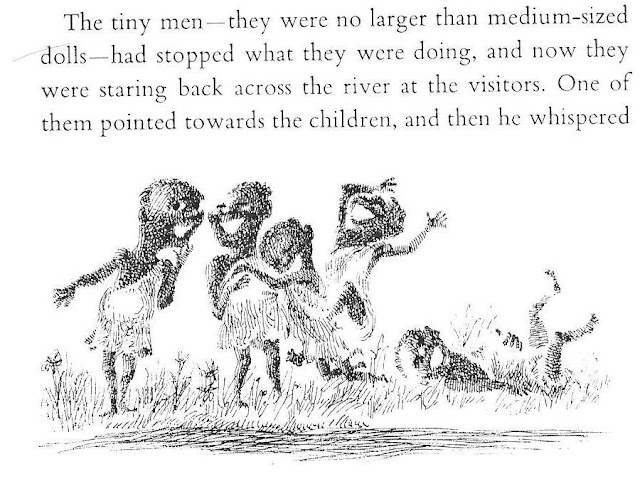 I've included the above text to allay any potential fears that this might be a very well drawn hoax done in Joseph Schindelman's scratchy penwork. Besides, I have no art or photoshop skills at all. 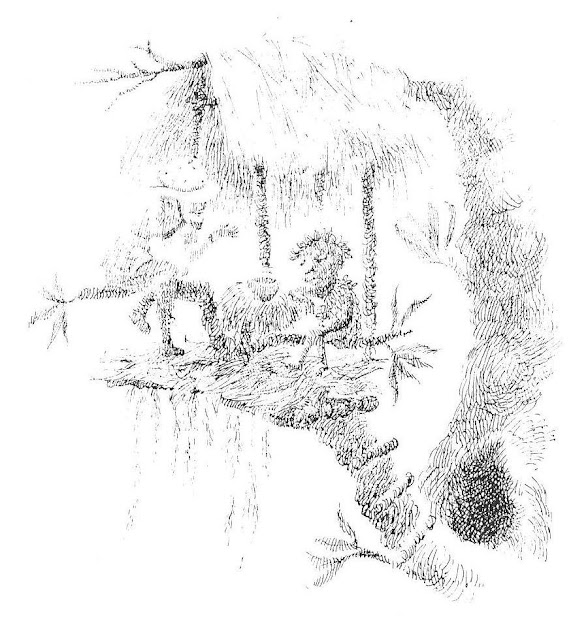 When I saw the Oompa Loomas portrayed as Black pygmies, I was struck at how honest it seemed. Their origins of where they came from suddenly made more sense. Yet I was dismayed at how hard it was to find other books that had these black people. It took me years until I was able to find an old copy in a library that assured me that I hadn’t made it up in my mind. (These are copies of photocopies, so any bad resolution isn’t my fault)

Of course, having little black men working for free for a white man who imported them overseas and singing and dancing in praise of him could be taken the wrong way. 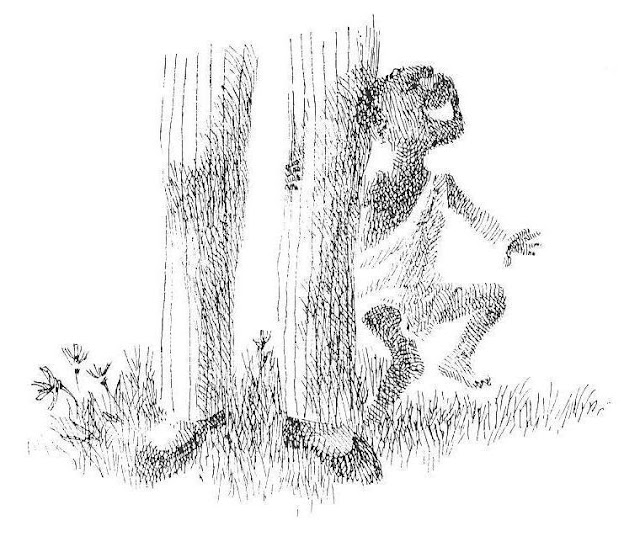 A large contributing factor might’ve been that they were regularly used as guinea pigs for Wonka’s outlandish experiments. And some of them could be potentially fatal. There’s a minefield for you. 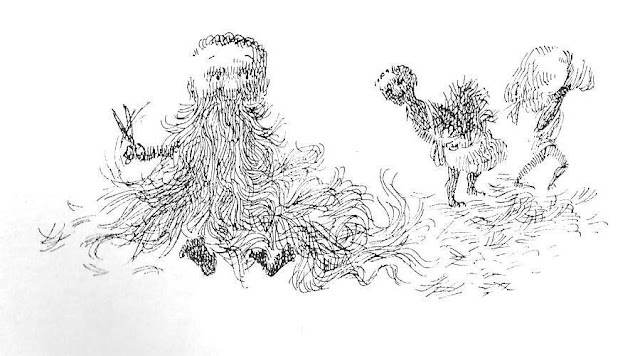 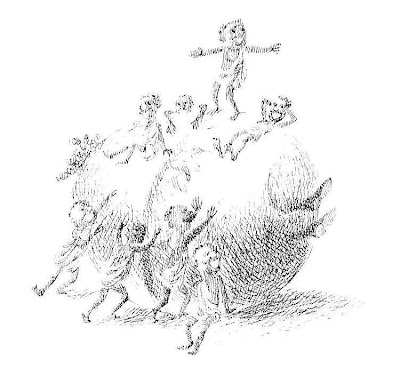 For completeness’ sake, I’ve included the picture of them rowing the boat, even though you can barely see the Ommpa-Loompa’s heads. There might not be a difference there, but I didn’t want to take the chance. 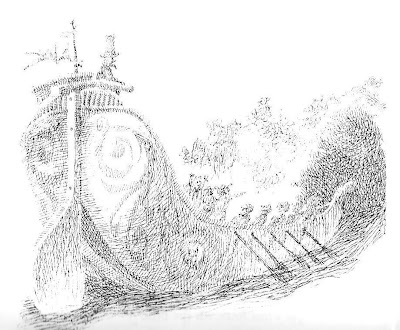 Still, if the modified portrayal of the Smurfs will lead to them becoming a Triumvirate with Asterix & Tintin, I won't complain. I just hope the translation will be on par with the earlier releases.
Posted by DeBT at 12:09 PM