Sinful admission time: I am glad they are being produced, but I generally don’t care about classic comic strip reprints. Like… at all. I’ve even been told (repeatedly) that I would really like a couple of them, but I have no enthusiasm for them at all. I promise one day to at least commit to reading a whole tome of unfunny 70 year old ‘gags’ just out of spite. But that day is not today.

Retailer Chris Sims made this comment on his site while liveblogging the latest Previews comic catalogue. I can understand his reluctance to get into any of the “classic” comic strips.

If you asked the average person on the street what their favorite Calvin & Hobbes strip was, you’d get any possible answer ranging from Spaceman Spiff to the Cardboard Box. Same with For Better or For Worse (the first 20 years when it was good) The Far Side, Herman, Fox Trot, Bloom County, and any strip with a continuing storyline. This also holds true for the major franchise holders, Garfield & Peanuts. Despite years of mediocrity, there were some truly creative spikes through their early years.

Now, if you asked these same people what their favorite Hagar the Horrible or Family Circus strip was, you’d be left with a blank stare. The majority of driftwood comic strips are such that they’re utterly indistinguishable from each other. Mort Walker said that the sole purpose of a cartoonist is to make his audience laugh. That may work as a short-term formula, but as a result, nothing memorable is ever really shown.

If all you’re concerned about is making small jokes on a day-to-day basis, that doesn’t allow you the freedom to think about longer stories with the same characters. Can anyone remember a continuing storyline in Dennis the Menace?

It’s why so many cartoonists were utterly baffled with Bill Watterson’s assertion that he held comics to a higher standard than everyone else. For them, comics were simply a simple tool to make money. But Watterson went above and beyond their perceptions to create the kind of comics that would stand the test of time. (Even though a lot of them were improvised rips of Peanuts comics) It was the equivalent of a literary writer bringing respect to the much-maligned trashy pulp novels. The closest comparision would be H.P. Lovecraft who created existential horror stories in Science Fiction Magazines, where everybody else was just writing gangster/cowboy stories... IN SPACE! (Yes, I just compared Bill Watterson to Lovecraft)

I’d be more impressed with IDW’s output if they put out more Sunday Comic collections, since cartoonists tended to give more attention to those than the dailies, which are simply too short to retain any kind of information. Of course, they may have to get some supporting funds first before getting the resources necessary to pare through the backlogs of old newspapers to get the truely worthy strips. 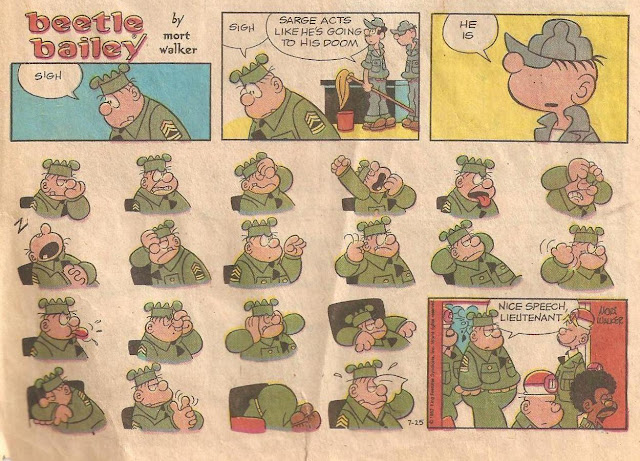 I’d really like to see a collection of Broom Hilda’s Sunday comics. Part of the problem with collecting vintage strips may be that their creators are still alive. As a result, they keep adding to their output even though they’re still past their prime. It’s why I was so surprised to see a large collection of Gary Trudeau’s Doonsbury coming up, since he has no intent of retiring anytime soon. 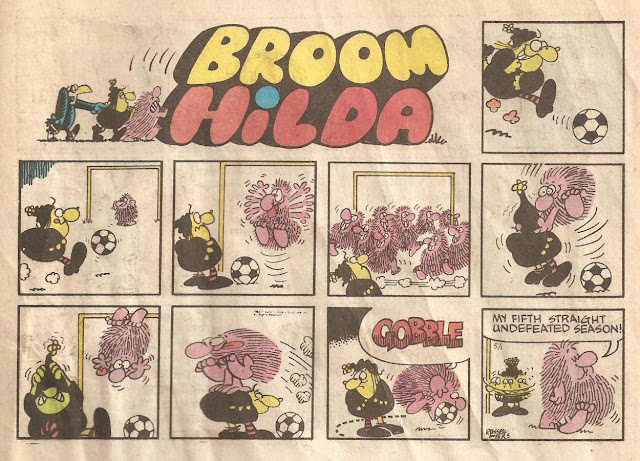 Newspaper comics and Webcomics exist in a weird kind of conundrum from each other. Newspaper comics are labeled with the expectation that they should be safe for children to read, and overprotective parents get extremely upset if they see something in the comics page that doesn’t fit their preconceived notions. Not to mention cartoonists are forever dismayed at what they’re not allowed to show on their limited space of the comics page.

Webcomics have more freedom, but may suffer for completely different reasons. No editorial freedom can mean just as many spelling mistakes. Humour-based storylines can quickly become too serious and ruin the mood if they’re not well-planned. Sporadic updates can mean the work has as much chance of losing an audience as it does at gaining one.

Webcomics are more varied in subject material, and can choose any theme material that Newspaper comics are afraid to touch. There was a time when stories about Sci-fi Travel, Jungle Adventures and Soap Operas were acceptable Newspaper comic stories. Now those have been all glossed over for family-friendly Nuclear family stories. Of course, most Webcomics like to focus on things such as Comics, Computers, and Video Games, so they run the risk of restricting themselves into a niche ghetto as well.

On one end of the spectrum, you’ve got jokes that only the most tech-fably will get. On the other, you’ve got rusty archaic jokes that only people in their retirement years will get. Newspaper comics seem to be forever aimed at the mindset of people who survived the Great Depression. Many of the jokes make references that may completely fly over the heads of today’s children. Mucilage anyone? Your mucilage may vary.

Parents may want to protect their children from the harsh realities of the world, but children are naturally curious, and tend to be on the lookout for anything particularly risque. It’s funny to think that a generation ago, parents were bemoaning about the lack of morality shown on television.