Orson’s Place, also known as Orson’s Farm, better known as U.S. Acres. Has there ever been another comic strip that’s been renamed as often in its short shelf-life span? 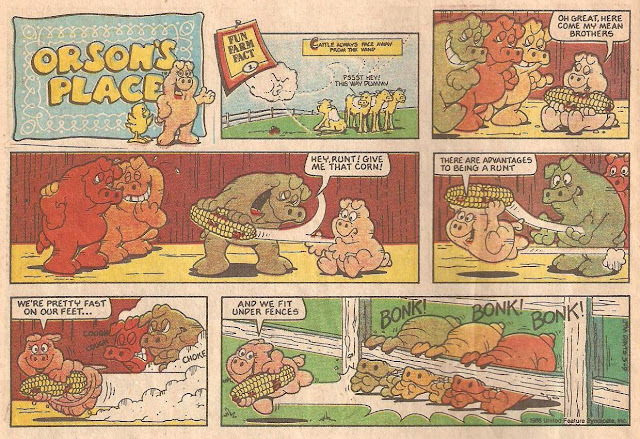 Everybody knows about Garfield, the fat cat who’s second only to Peanuts in terms of licensing popularity. But not many know about the origins of the Pig who filled out the middle part of the popular Garfield & Friends cartoon.

I was probably one of a handful who knew beforehand where the mysterious farm critters came from. When the strip was originally being published, I was amazed when my Mom told me that it was done by the same artist as Garfield. In my mind, I was awestruck that such a popular cartoonist could afford the time and energy to do two comics at once and not suffer any quality in both. (I was very naive at the time, don’t hold it against me)

So I was completely flummoxified over who could possibly be Garfield’s friends, until it was revealed during the theme opening. I instantly recognized the Pig from that comic strip, and realized it was the perfect counterweight to Garfield, allowing the show to have more variety. It didn’t occur to me that the only reason Jim Davis created the strip was for merchandising reasons. (I was also less cynical back then too) 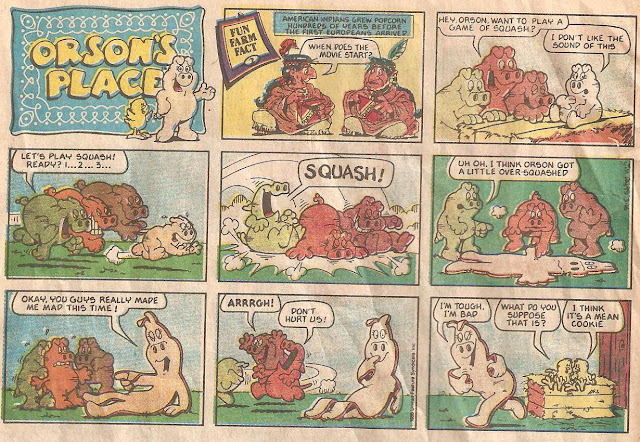 What a lot of people don’t remember was that Orson’s brothers were of varying colours. I’m sorry to say that I don’t have the Sunday strip with Orson’s plaid pattern, as seen here. That’s the folly of casually keeping comics - you always think you’ll be able to remember what you’ve read long after it’s gone, only to realize that when you want to reread it, it’s no longer around. That’s probably what makes comic reprints so popular. 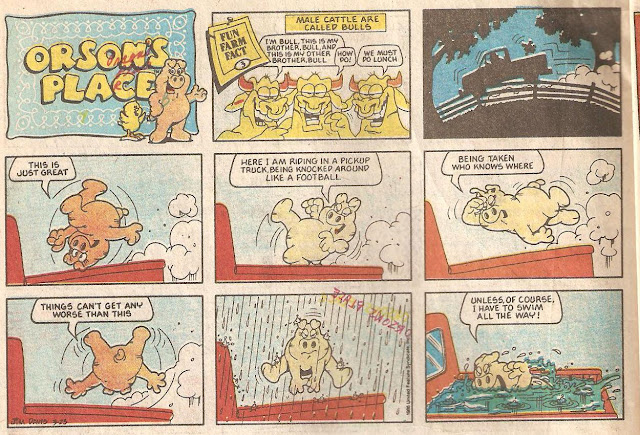 Likewise, this is the only colour version of the farmer girl who finds Orson. I always thought of her as being black, even when in the collected versions, there was no possible hint of her being so. Ah, the magic of colour-free bias. 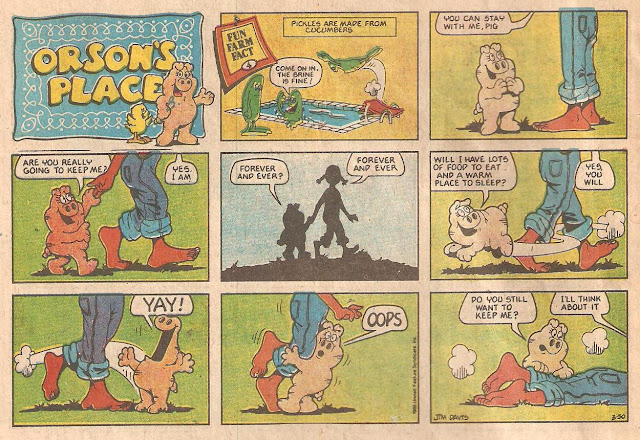 This was also around the time I found out about the daily strips as well. I was introduced to them by my Mother who showed me the little tease of Orson feeling sorry for himself, wondering who’d rub his tummy, when he heard an off-screen voice saying (s)he’d rub his tummy. At the time, I was both euphoric and dismayed that there were more comics for my reading pleasure, and that I’d never known until now. Because this discovery came too late in my life, and there were other strips whose beginnings I’d similarly missed, I didn’t opt to save the dailies in the same way I saved the Sundays. At times, I kind of regret it now. But then I look at what the comics page has recently evolved into, and I don’t regret it as much as I thought I would. 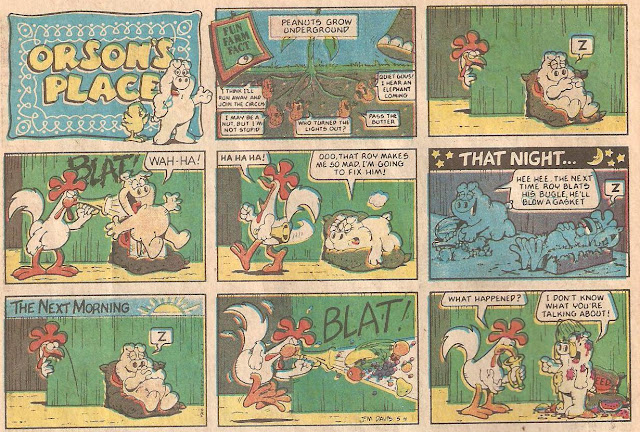 The only strip collection I ever saw in person was the 3rd book, and that was at an airport bookstore. But I didn’t purchase it for two reasons - 1. The other books weren’t available, and 2. The Sunday comics weren’t complete with the throwaway panels, which I greatly enjoyed. Lack of coin in my pocket was also a contributing 3rd reason, as well as lack of time if you want to get technical about it. 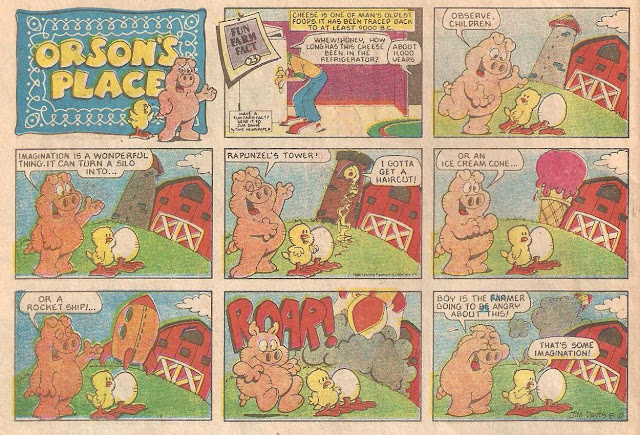 Unlike the Heathcliff, Marmaduke and Orbit strips which put little factoids at the end of their strips, Orson’s Place put these anecdotes right after the title panel.

Although finding the strip collections was an ordeal, smaller book collections of the strips were easier to find, as well as large self-contained stories published by Bantam Books. You were more likely to encounter the elusive Cody & Blue in the larger books. When I first saw them, I had no idea where they’d come from until I saw a reprint of their introduction. I’m only just beginning to regret giving away the strip collections after I no longer wanted to read them again. The only title I can remember was, “I Wasn't Hatched Yesterday”. 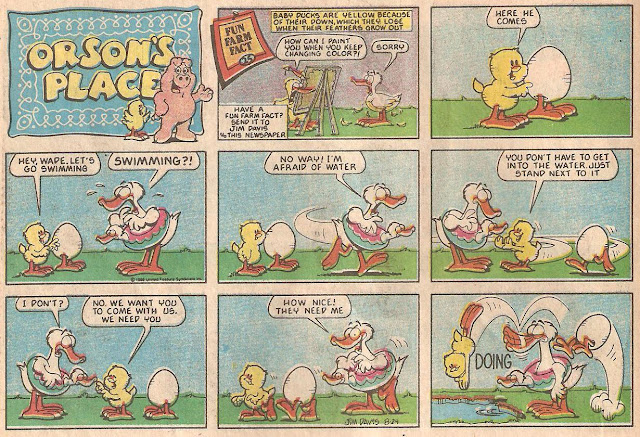 One detail I always liked about Wade was that his inner tube had the same facial expression as his face. A minor detail that was left out of the cartoon - the tube would have the same expression, but wouldn’t open its mouth. It annoyed me a little, but I can kind of understand the reasons for doing that - less work for the animators to synchronize twin ducks, one smaller than the other. 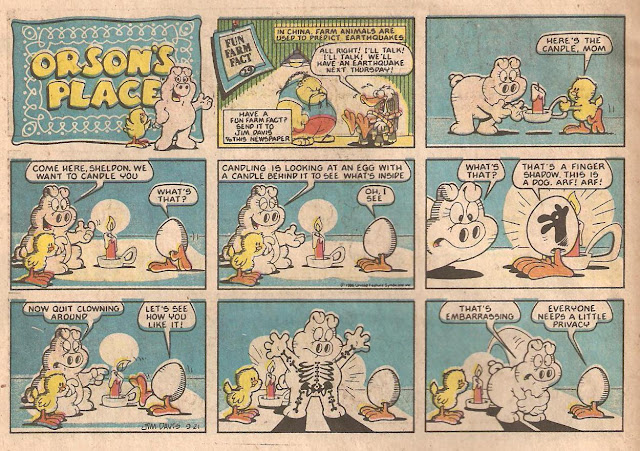 Fun but useless Fact: when I first saw Wade’s explaination for his inner tube, I mistakenly read it as “Because you’ll never know.” I took Orson's response as a suspenseful mystery that would never get solved. It drove me nuts not knowing why, and was one of the reasons I kept reading the strip in hopes for an explaination that never came. When I finally reread the strip in question, it was something of a letdown. 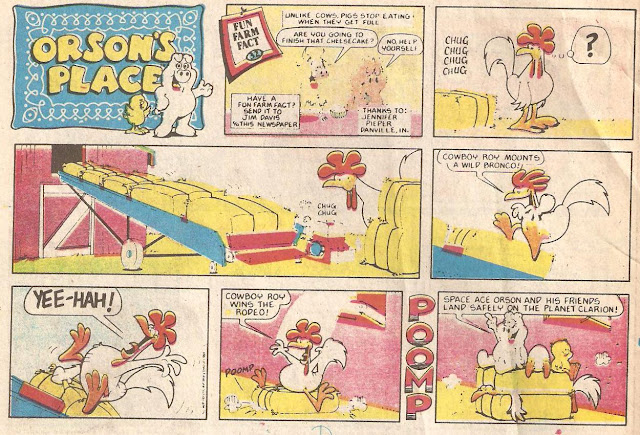 Around the time I was reading the dailies, I came upon this strip where Wade approached a mysterious creature in a tree stump. With my past experience of comics, I thought the secret would be revealed the very next day. So upon reading the Sunday comic, I immediately thought the thing in the tree was the cow in the Fun Farm Facts panel. Even easier to mistake for, since the pig there looked exactly like Orson. (Sorry for the bad colouring job - blame the Gazette for that) Though because of the lousy colours, I thought the cow was taking up the whole background in that panel. If the reality is different, I’m not sure I really want to know. (I also thought the motor near the hay machine was a tiny man, but that’s neither here nor there) 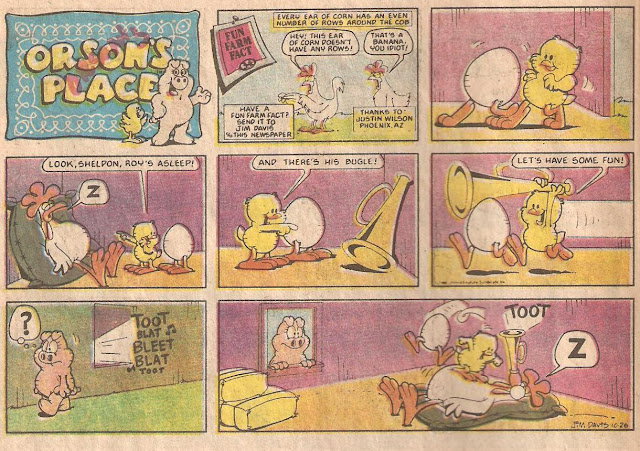 Near the end of the strip’s run, the number of Fun Farm Facts (would’ve been named Faqs today) had reached 161. If we include the remaining 8 Sundays, the total comes out to 169 weeks. That comes out to just a little over three years of strips, even without the last four weeks of dailies.

So what’s stopping Jim Davis from putting out an omnibus collection of all the U.S. Acres strips? It’s not like he’d be losing any money over that would he? 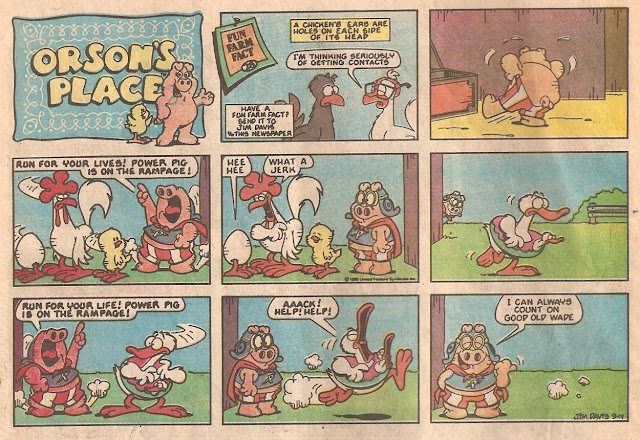 Well, it might be a little more complicated than that. Near the end of its run, it was obvious that it was being ghost-drawn by another artist, given how cartoony the characters looked, and the extra name at the bottom. Giving the rights of a licensing fee to everyone involved, as well as making sure the wages were fairly distributed (and we all know how fair the world of comics publishing is) there’s a large chance that Jim Davis is just waiting for his assistant, Brett Koth to die off so he won’t have to share any of his hard-earned money.

Well, that’s my theory, and I’m sticking to it. 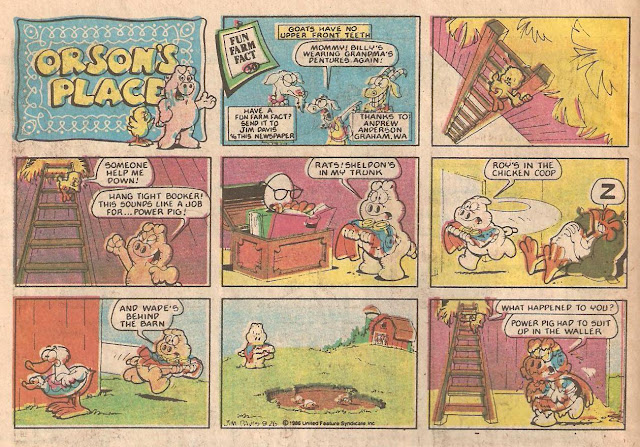 Of course, the more plausible explanation is that despite its appearance opposite Garfield, it was never that popular to begin with. Bill Watterson even said that it was an abomination to intelligence. Oh well, different strokes for different folks. 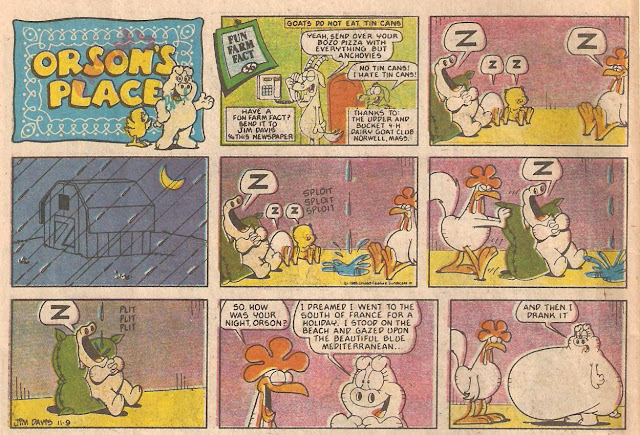 For more comics not seen here, go to this site for more. There's also some 35 books left on sale for anyone interested enough to splurge their money on. Of course, they'll still be the Black & White versions of the Sundays. Caveat Emptor.

If there are any among you willing to make a stink for colour versions of the Sundays, now's the time. I think Jim Davis' e-mail address is lying around somewhere. 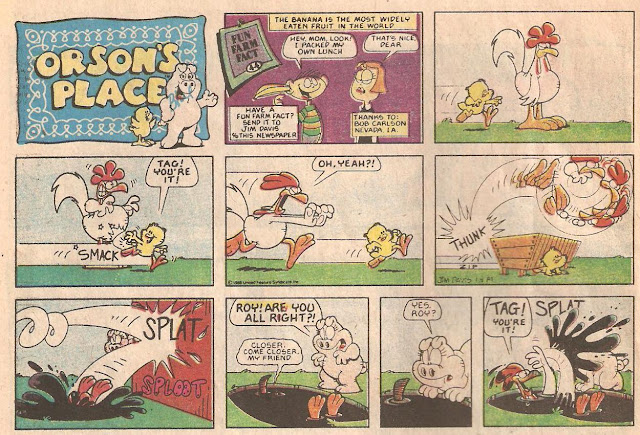 This is the closest Jim Davis came to showing he was the same artist on Garfield, and this was almost a year in the strip’s run. The boy’s mother looks suspiciously like Liz, Jon’s favorite vet. However, the lousy colouring job makes her look more like an extra from The Simpsons. Of course, since this was published before the TV show aired, and only appeared in one solitary panel, there’s little to no chance of plagiarization here. Though it would be interesting to see a Simpsons’ version of Garfield, and vice-versa. (Back when they were at their creative peaks I mean) After all, they both have the same kind of bug-eyes, only Garfield keeps his half-closed. (more like 9/10ths closed considering how large his eyes are)

Something else I just realized - although the main strip featured farm animals, the Farm Facts panel was the only place where you could regularly see humans, even though they dropped out of existence once the girl brought the pig home. And a lot of them were very different from stock Garfield characters.

There's a bunch of other Sundays I haven't put up here. I just posted what I thought were the funniest or interesting ones. It'd be unfair of me to show favoritism towards a single strip when there are plenty of obscure ones starving for attention. You want more? Go bug Jim Davis. Make him realize there's an untapped audience out there.
Posted by DeBT at 9:47 AM