Long before Boom! Studios licensed their property on the Muppets, I was already vaguely aware of them via their short-lived comic strip, written and drawn by brothers Guy and Brad Gilchrist. 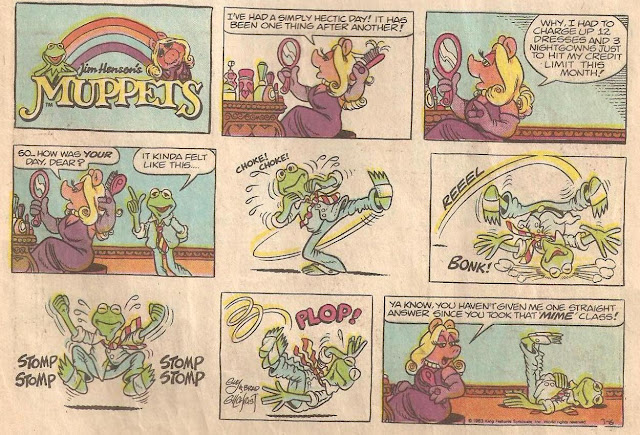 There’s not much I can’t say that’s already said in this wiki, but there’s a few notes I’ll point out for those of you too lazy to click on the link:

- It was the first comic strip to be syndicated in worldwide from the first day of publication.
- Because of that, jokes had to be universal, and puns couldn’t be used.
- As a result, the creators had to work twice as hard to make sure their material could be used and translated everywhere. 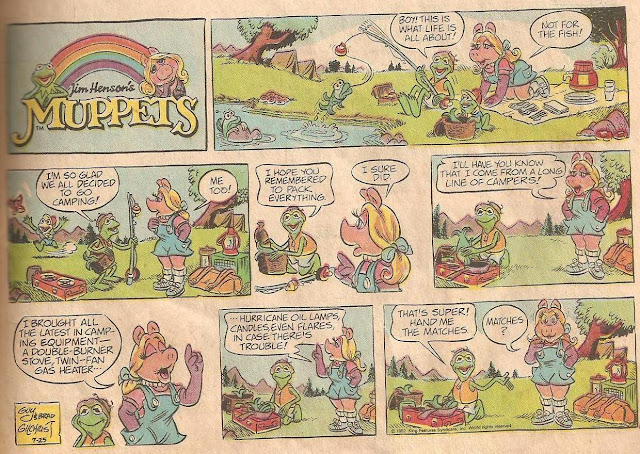 When it started out, it was very similar to the Muppet format, only showing the characters from the waist up... 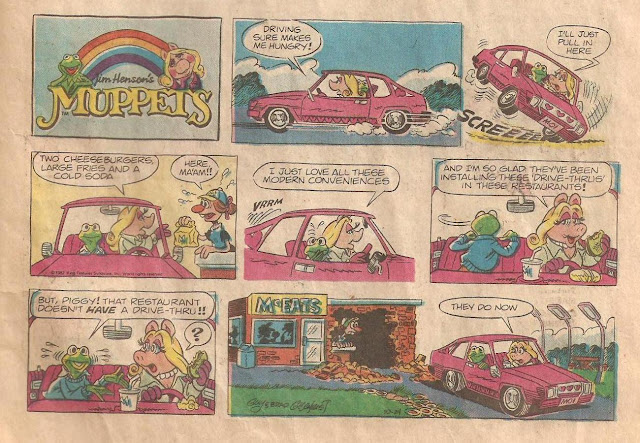 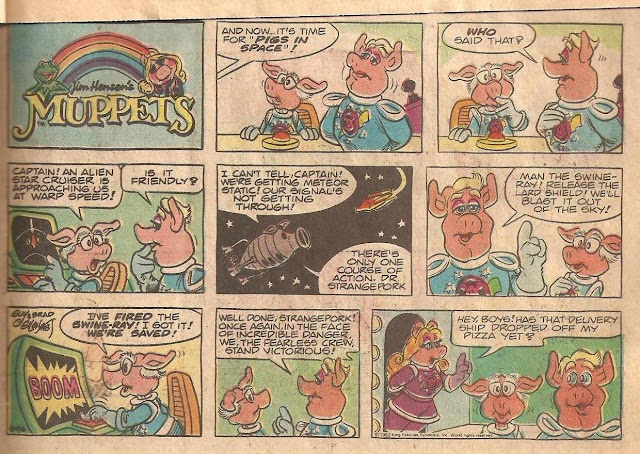 But in future strips, they showed them in full profile from the waist down. (No naughty parts there) 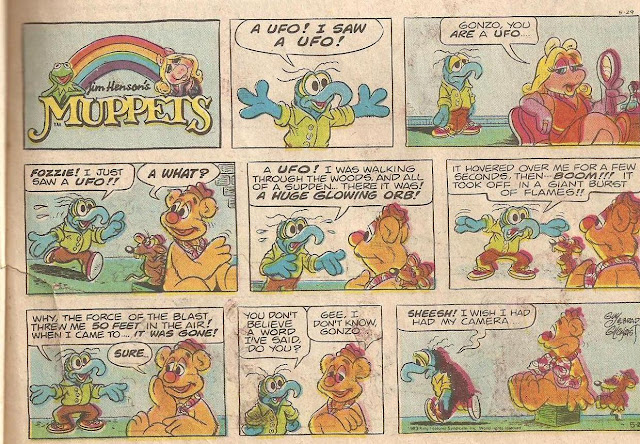 Of course, this would be up to par Jim Henson’s workaholic tendency to ensure perfectionism from his beloved creations. It was this dedication that drove him to an early grave. While Tezuka was still striving to create more Mangas on his deathbed, Jim Henson drove himself into exhaustion from an infection that should never become that serious if he’d paid more attention to his health. In that sense, the two men aren’t that dissimilar. Both took a childish display and created it into something far beyond their original intentions. 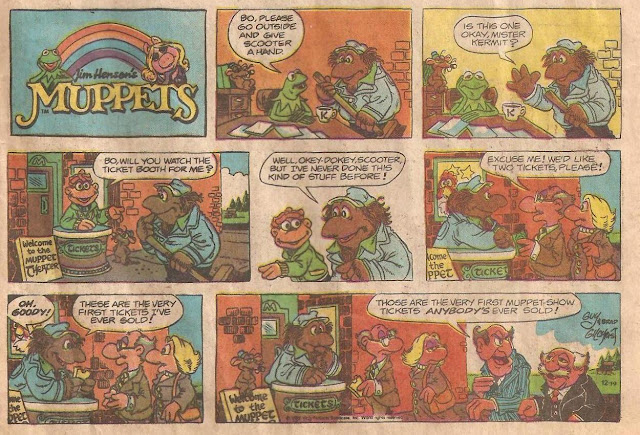 Below are the first two comics in my collection, dating from April 25, 1982 and May 22, 1982, both concentrating on a certain theme. I have no idea if Gonzo tended to give predictions that drove Miss Piggy crazy in the daily strips, but it'd be fun if he did. They're the earliest comics I have, so asking me for anything before then is pointless. More on why later. 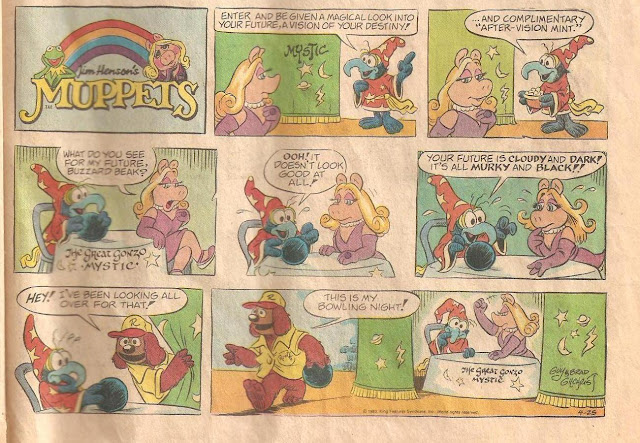 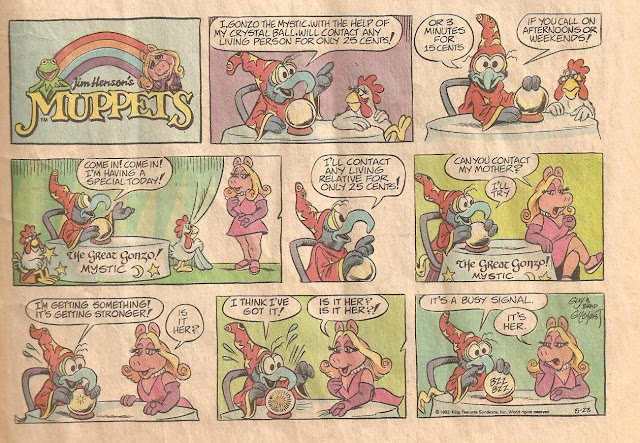 Since Boom! Studios seems to be doing well with their Muppet comics, it’s curious why they haven’t bothered to reprint these as well. Chalk this up as one of the more puzzling refusals of licenses to print money. It can't be a dignity thing - I'm banking on complete ignorance, since this ran from 1981-1986, and hardly anybody knows anything about this. 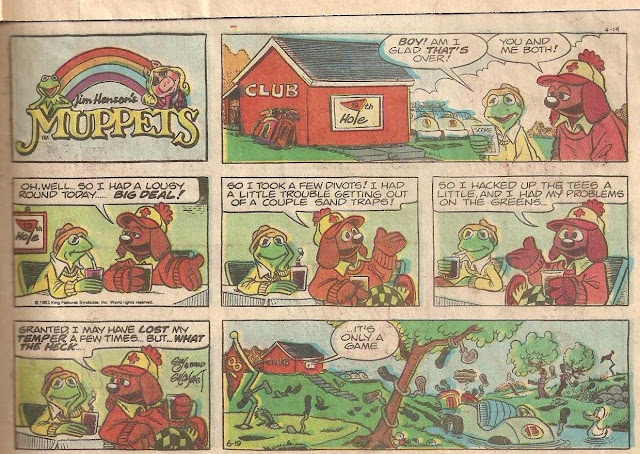 However, if asked about a Muppet comic that I fondly remember, I wouldn’t think of this comic strip. That honour goes to the Children’s book Muppets at Sea. 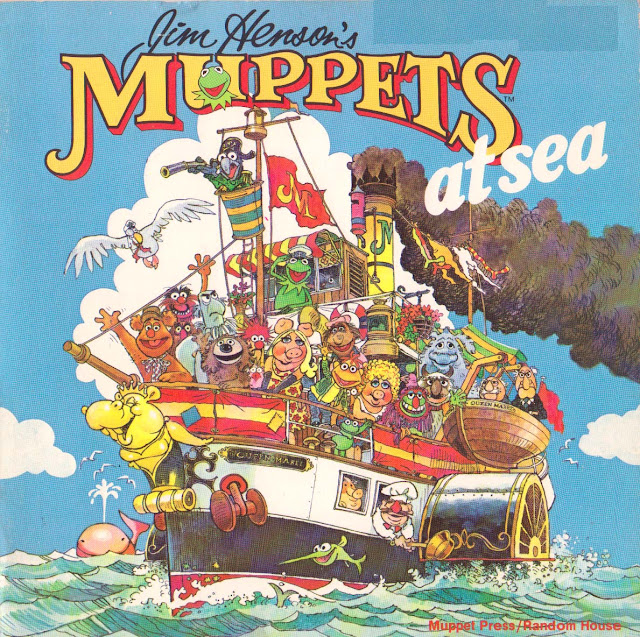 One of the Grade schools I stayed at had this book in a cupboard in their lunchroom, along with other books such as Johnny Crow's Garden, Snow White & Rose Red, a crazy French comic with Speed Racer overtones, and several Sunday comics that predated when I was born.

When I was transfered, I didn’t take those books with me, feeling that other students should have the chance to read them rather than selfishly steal them for myself. Now, having never seen those items again, I’m left with lingering regrets. I wouldn’t have taken the books, but I wish I’d taken the Sunday comics.

Even now, I have dreams where I go into dusky basements or Garage sales, and find stacks of old Sunday comics for my purchasing pleasure. And I'm always disappointed when I wake up.

As a parting shot, Fonzie gives an obvious answer to that eternal question: "Where do you get your ideas from?"