Near the end of the American Splendor movie, Harvey Pekar was lamenting to his adopted daughter that she kept flipping the pages of the comics the wrong way. Her response was "I like to read it this way". At the time, I read a comment somewhere that it was an adage for how new comic fans were more adept at reading Manga, and defying their parent's conceptions of how comics were supposed to be read. I didn't think much of it, other than to take a little pride for the subtle gains Manga was taking inroad.

Now, looking back, I have another more plausible explaination for why she was doing that. It was not an act of rebelion, but rather, trying to make sense of the story. I've noticed that oftentimes, when I'm scouring through the pages of Heavy Metal Magazine, I'll often skip past the first couple pages of a short story, then become interested enough in the ending that I'll read the comic from the beginning to see how it arrived at that point. What Pekar's daugher was doing was probably nothing more than reverse-engineering the story so she could better understand it. It's basically the comic equivalent of reading the last page of a novel.

I'm not alone in this. I've heard that in Europe, where most of Heavy Metal's works come from, audiences are notorious for going straight to the last page just to see what point the author was trying to make. And oftentimes, because the message can be hidden quite well, it can be difficult to understand what's going on.

I only began to understand that people might not be able to read comics as effortlessly as I do when my Mother had trouble interpreting the visual metaphors in the great Auto-bio comic, Epileptic. Unlike most American Auto-bio comics, which tend to be full of Crumb-based self-bashing (an unfair stereotype that never quite went away), Epileptic was much more straightforward, telling the facts as they presented themselves. Unfortunatelly, since my Mother tends to think in words (she reads the text before looking at the images), she had trouble putting the two disassociative elements together.

I finally realized she couldn't "read" pictures as well as I do when she failed to understand the visual metaphors of immigration in the silent comic, The Arrival. I was reminded of something I read on the Internet years ago: A comic fan was trying to help his wife understand the appeal of comics, but was having trouble getting his point across. For some reason, his wife had a lot of trouble understanding how comics were supposed to work. Finally, he asked a basic question: What's happening in these two panels? 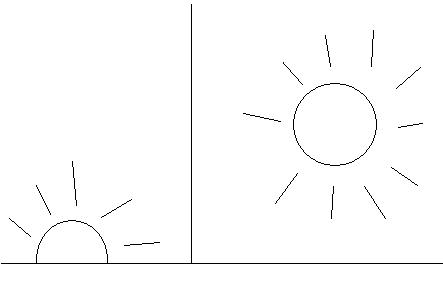 The obvious answer would be a sunrise, right? Yet, he was very surprised to find out that his wife answered, "A sunset, and a sun in the afternoon." It wasn't a wrong answer, but not what he was expecting. His wife was simply unable to make the connection between two panels in a visual manner. What she saw was two different suns in two different timeframes. I used this same experiment on my Mother, and got the same answer, which leads me to believe that this is not a localized problem.

As penance, I decided to show her the Auto-bio, Stitches, which I found quite similar in feel to Epileptic, and much of a faster read. The visual metaphors are kept to a minimum, so she shouldn't have much of a problem.

I really wish I could find the links to those articles I keep referencing, but it's been so long since they've appeared that they've probably disappeared from memory.
Posted by DeBT at 1:50 AM