With Papercutz's release of King Smurf, we finally got to see the results of Jog's elaborate essay of this charming satire of a medival political situation turned dictatorial. However, there were some instances where the previous translation job was better handled. The most obvious one being the title itself where it changed from the breezy King Smurf to the more clunky The Smurf King. Not only does this title make this nameless Smurf more distinctive from the others (Papa Smurf, Greedy Smurf, Harmony Smurf, Grouchy Smurf, etc) it also poses a problem that'll be pointed out further down. 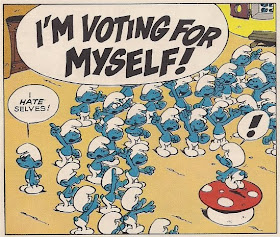 To the current one. 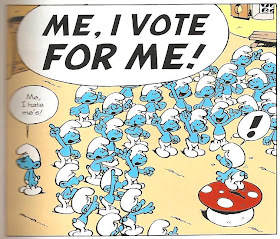 The font for the group yell much stiffer and less organic (a common complaint whenever computers are used for lettering as opposed to the human hand). In addition, changing Grouchy Smurf's "I hate (whatever)" to "Me, I hate (whatever)" was an annoying faithful translation. The original version being "Moi, je déteste (French word for whatever)". But it gradually grew on me, when his way of talking was evident even when off screen.

Even at a blown up size, you can barely see the little note pasted on King Smurf's robes. It's made even more cramped up with having to fit the long term "The Smurf King", and totally ruins the joke.

Likewise, they also missed out on one of the best comebacks ever: 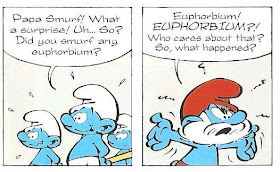 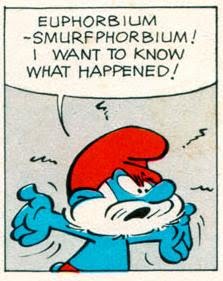 Papa Smurf should've said, "Euphorbium, Smurforbium!" here. If the earlier translation didn't have that quote, it should have. Just imagine how many memes that could've inspired. "Hurtful, Smurful!" "Foreshadowing, Smurfhadowing!" "Web Surfing, Web Smurfing!" "Turf Wars, Smurf Wars!", you get the picture.

After Papa Smurf resumes his former position of power once again, the former King Smurf retires his outfit to the fields similar to how Thanos used his duds at the end of the Infinity Gauntlet. This begs the question of what he would be called from that moment on? The Smurf formerly known as King Smurf? THFKaK Smurf is quite a mouthful in normal conversation, and would take even longer if he referred to himself in the third person multiple times. Chances are he faded into the background along the multitudes of nameless Smurfs, and was content not to be remembered as the one who almost drove their village to ruin.

These little mistakes weren't just restricted to the King Smurf story. The second story in the collection, The Smurphony (originally titled Smurphony in C) needed a better fact checker. Here, you can see from Gargamel's increasingly pathetic chase of Harmony Smurf that the monologue was repeated in two balloons. In the sixth panel, he should be complaining about getting a crick in his neck rather than getting a cramp in his other calf. That doesn't fit with what we're seeing here. 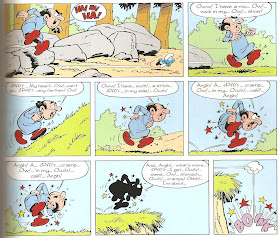 I only point out these inconsistencies in the hope that future reprints of this series will be corrected. I'm also hoping that we'll see The Smurfnapper (Gargamel's first appearance) in the next book, before the Smurfette appears, so we'll have some idea as to his motivation in capturing the little blue people. It would be a foresighted shame if it were only available in a separate comic book that's probably out of print by now.
DeBT at 4:28 PM