There are times when I wish I had better foreknowledge of how to properly download and save files of webcomics, never knowing that they might not be around forever.  Neko's House had numerous differently named files, which would make saving all of them a chore without proper foreplanning.  I'm regretting not saving any of City of Reality when I had the chance.  Part of that was because some of the pages had Flash images, which were embedded in the stories, and could only be saved via saving the entire page and finding the sole SFW file in there.  That, and I was sure that such ambitious quality comics would surely be collected into dead tree form sometime in the future.  But my optimism was sadly misplaced.

Part of stems from wanting to wait until the story is done before going to the trouble of saving everything.  Another is contemplating the desire to reread something again and preserve it for future generations.  There are so many hours in the day, and the latest influx of newer comics popping up make it hard to resist temptation.  Not to mention the

I was able to save 70 Seas, and the mouseover text and commentary of Larp Trek.  I mention this because there were times when I thought the domain home had run out from the experience that is JACK.  The comic had been bouncing on and off of servers multiple times, going from keenspot to Pholph with weekly updates, going into sporadic updates, to fewer updates, with less and less impetus to see what wild things were going to happen next.  There's supposedly two final arcs to wrap everything up, but considering the amount of stuff and lack of keeping everything that's happened so far straight, there's not much hope of ever seeing the ending.

When the site wasn't available, I began to panic and started using the webarchive to gather as much material as I could before it was too late.  And then the creator made the entirety of JACK available for download, though the Flash file for Short 30: Twist Twist Twist doesn't work.  Those who've seen the 3rd page in action know what I'm talking about.
What I particularly liked about JACK was the convenient option of showing all the pages of a story arc in one fell swoop, which made speedreading notoriously easy without having to go to the trouble of constantly clicking for the next page.  Though sometimes it wasn't always perfect, as some pages in Two For You were confusingly out of order, and homosexual elements in How To Make A Monster were missing.  (Since the website is no longer available, these are now moot points) Two For You also had some bonus pages by typing the answers into the webpage address that I have yet to find. 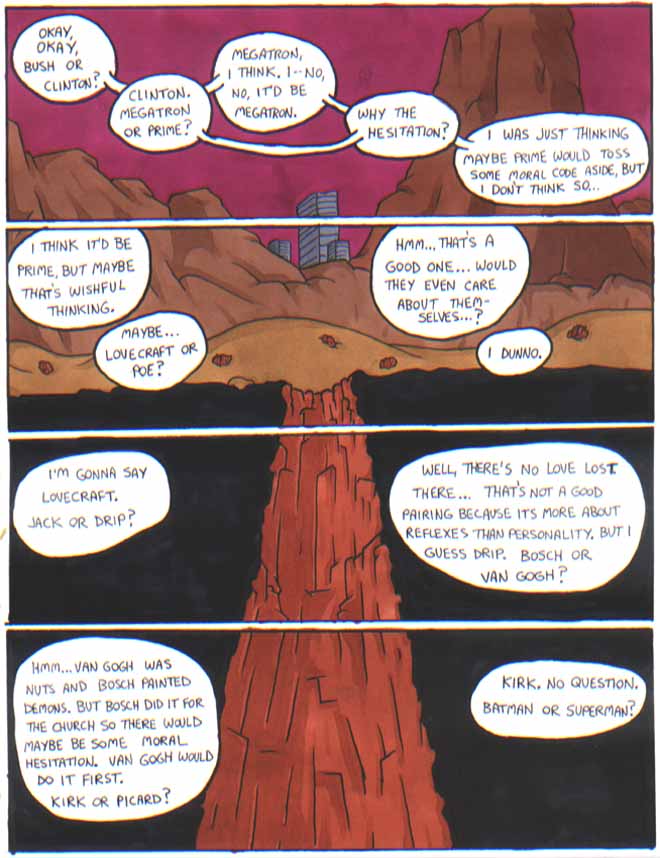 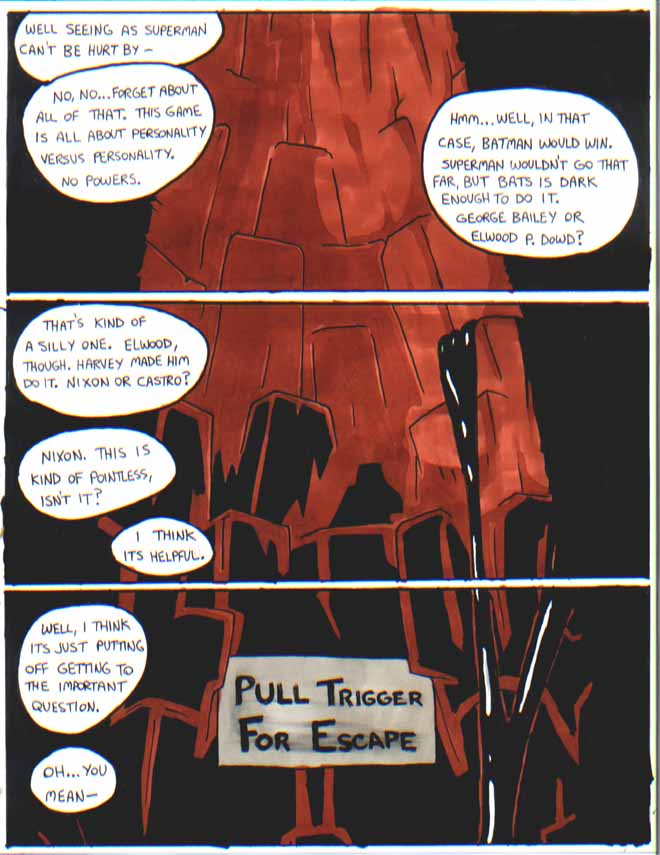 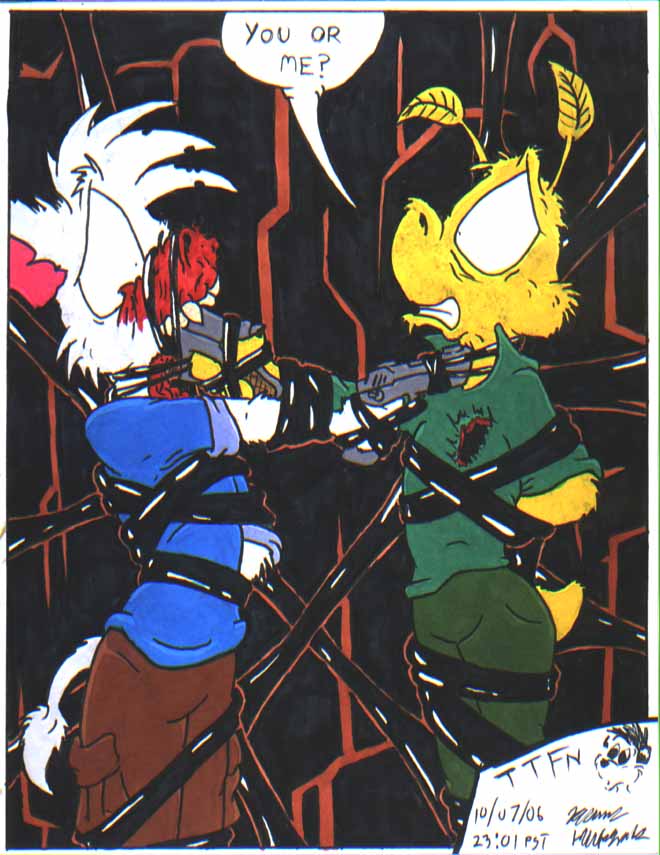 When JACK wasn't being worked on, the creator David Hopkins seems to have busied himself with doing commission artwork and doing the nonsensical Perils of Paula and a Furry version of Friday the 13th.  But when JACK was on hiatus, he made an adaptation of Pink Floyd's The WALL in a kind of form of therapy that can only be described as a self-indulgent rant that was so noxious and poisonous that after a few lyrics, I couldn't bear to look at it.  And there's a LOT of disturbing stuff in JACK that I like, which should tell you something.  You can check out parts of it in the links here, but consider yourself warned.

All this is to say that while browsing the Pholph home page on webarchive, I came across some comics that didn't seem to be available elsewhere.  Namely, the JACK version of Terror at 20,000 Feet.  Sadly, the 4th and 9th pages are missing.  Originally, I wasn't going to keep them if I didn't have the whole collection.  But coming back upon them later, I figured I might as well save them while I still had the chance, since they weren't available elsewhere.  And the gist of the story is still present even with stuff missing. 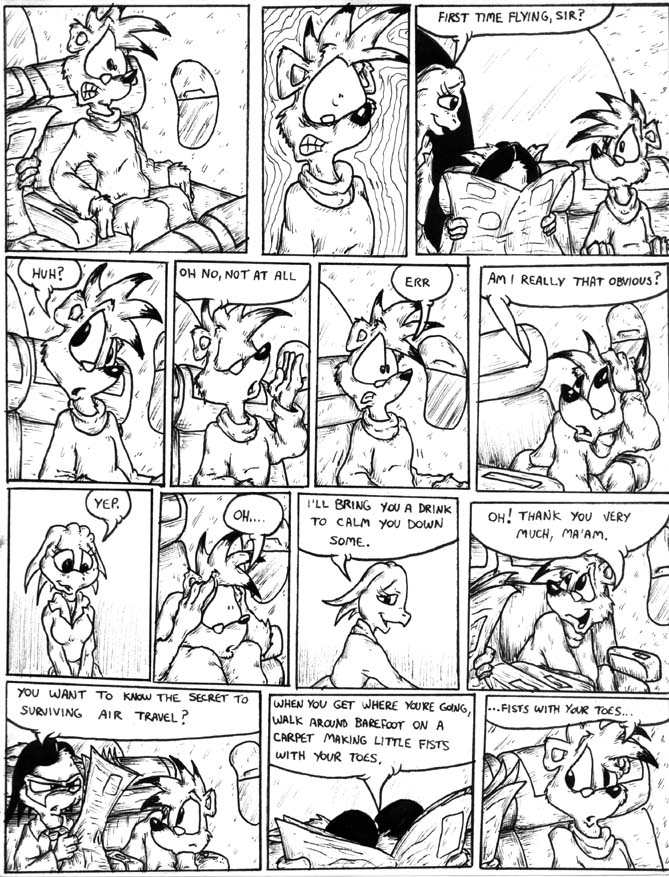 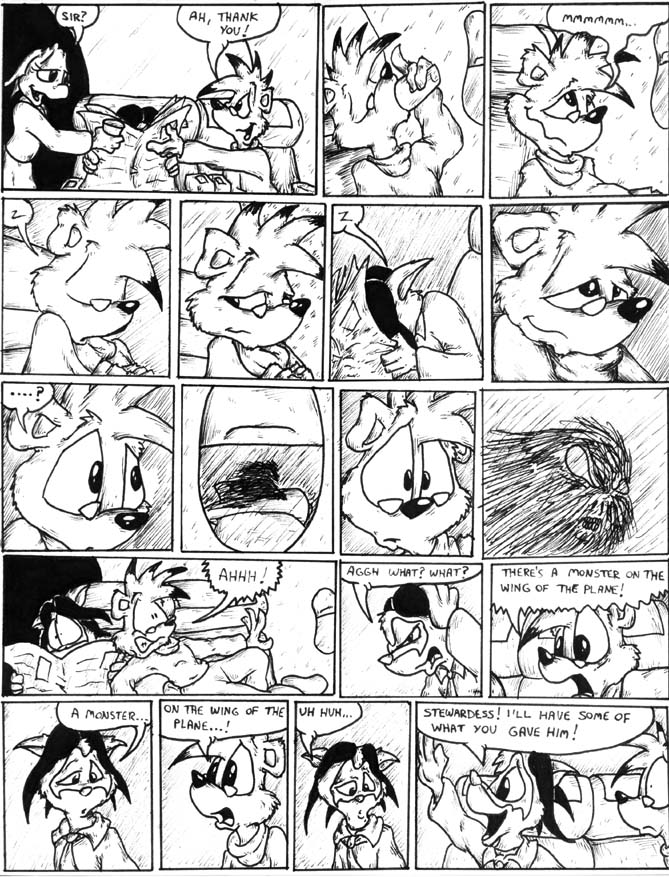 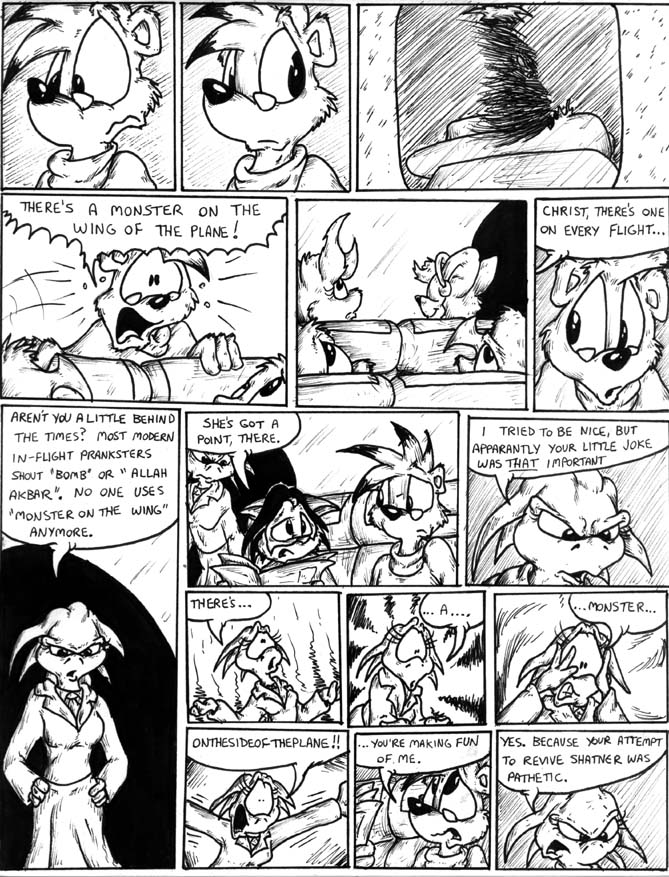 This is where the 4th page would normally be.  Ironically enough, while I like the concept of the Twilight Zone, I'm not a fan of the execution.  The old episodes seem to take too long, and could easily be condensed in half.  And they all focus on just ONE slightly off-kilter element of reality instead of multiple.  Other shows that have parodied the elements and endings of the show have basically ruined the Twilight Zone for me.  I'd say that Neal Shusterman's short stories come closest to my idea of what a Twilight Zone episode should feel like. 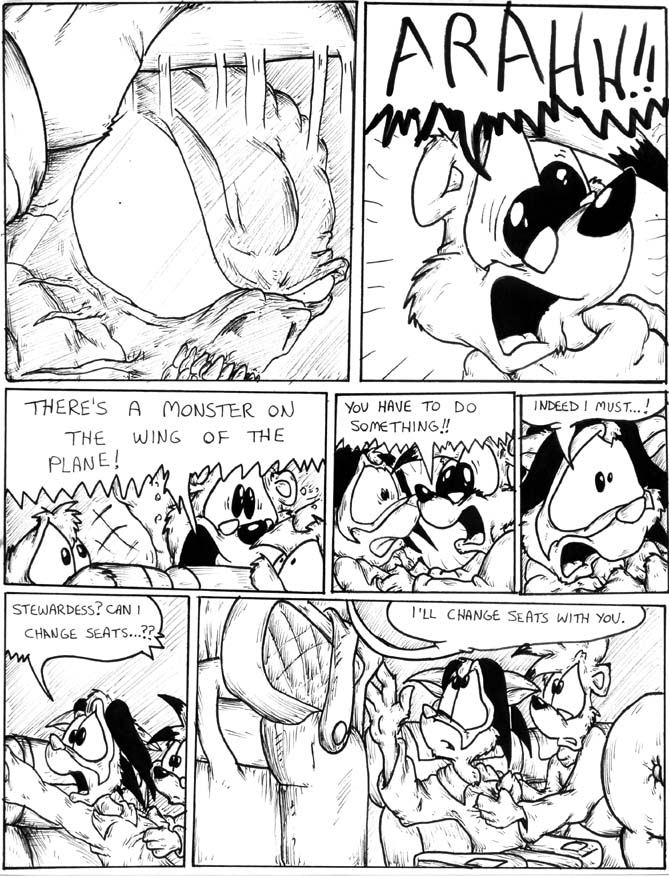 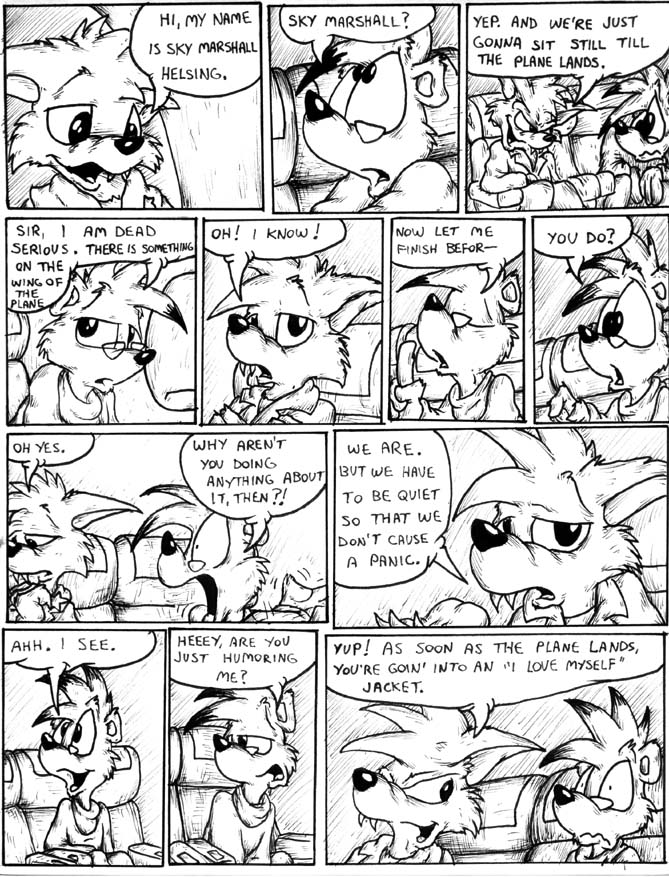 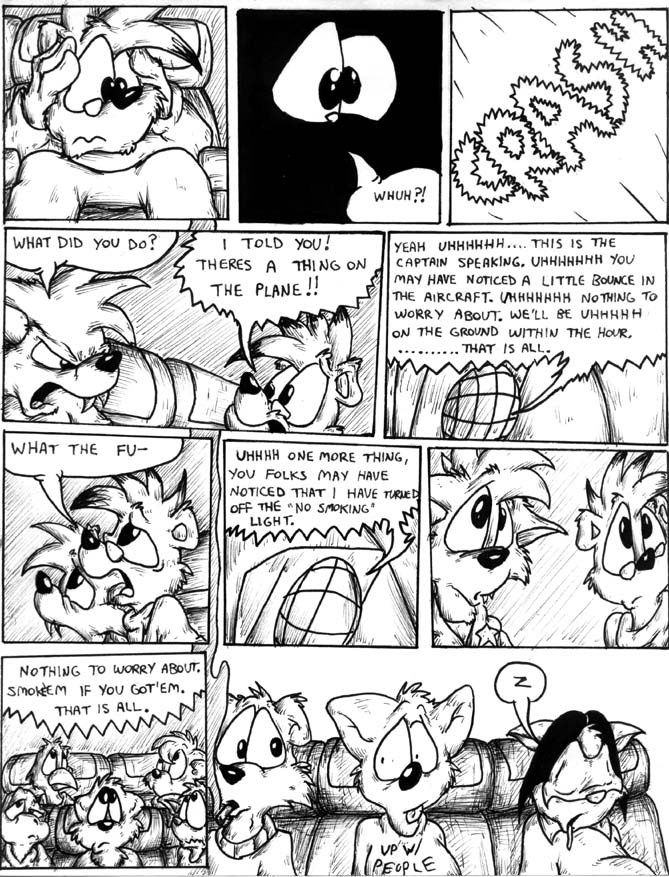 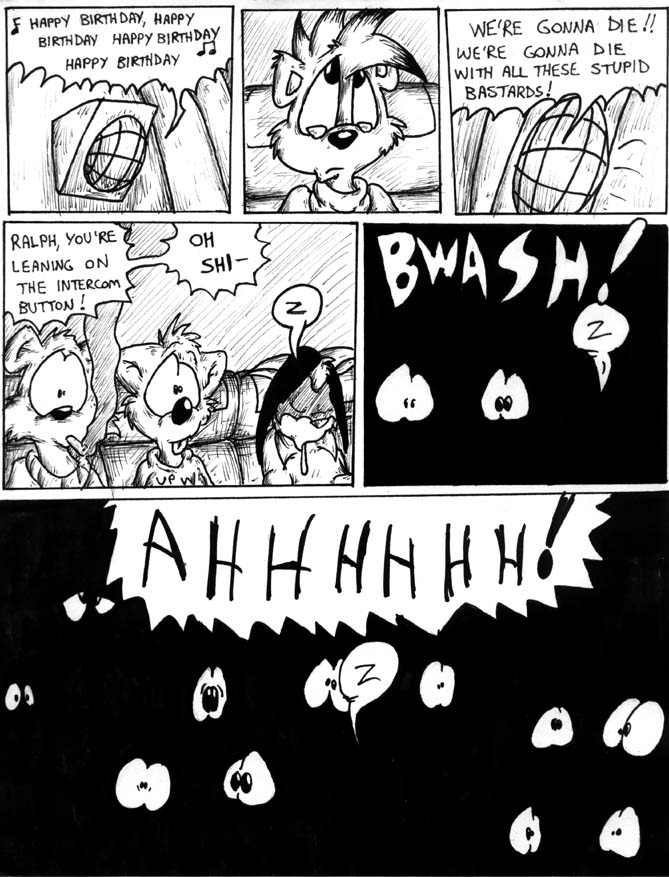 And again, here's where the 9th page would be.  I imagine there'd be lots of black with floating eyeballs here.  I've never seen the episode here, save for the Simpsons Treehouse of Horror version. 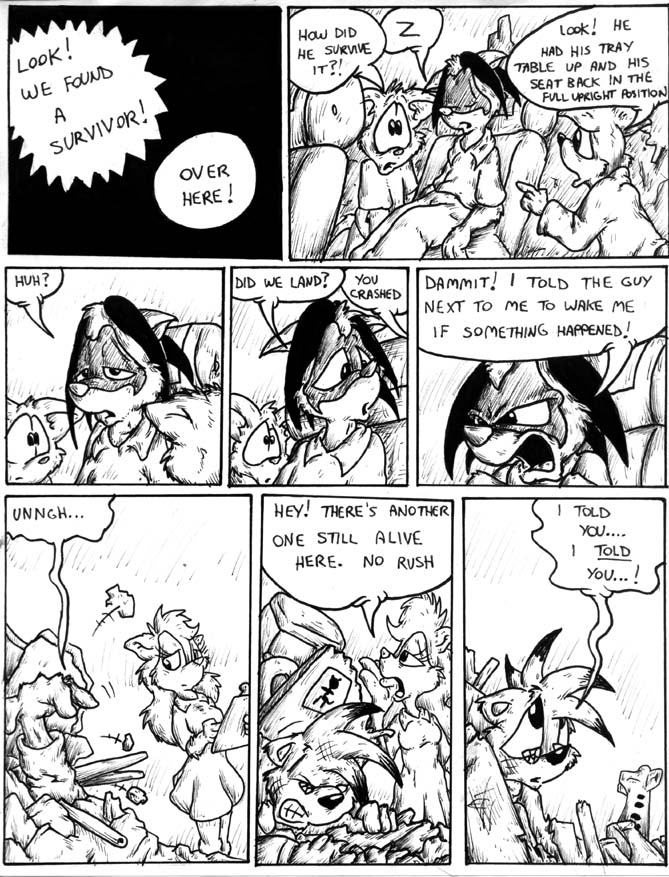 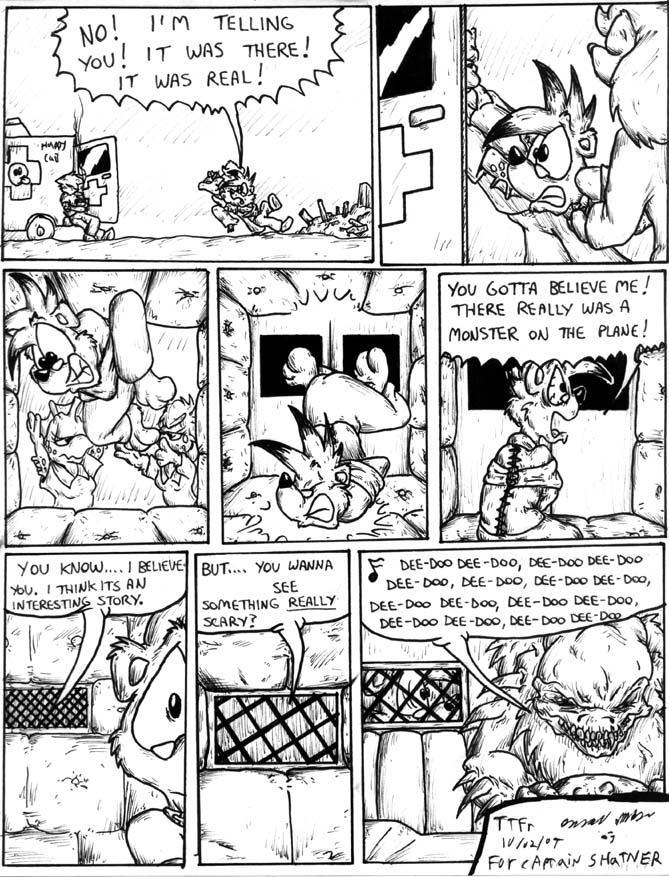 That's supposed to be Kane, the supposed Big Bad of Jack driving the truck there, but he's made such little of a commanding impression in the comic that he's more anticlimatic than actually intimidating.
Posted by DeBT at 1:20 AM 0 comments