In the 1990s, the Archie company underwent a wide range of experimentation with their normally static publishing line, pushing into new and weird realms that would be considered borderline commonplace nowadays.  One of the unexpected paths taken was the addition of a baby into Jughead’s family, not unlike Elly undergoing sudden pregnancy in For Better or For Worse.  They say that when a franchise is flagging and desperate for bursts of creativity, they stave off that by adding a baby to the mix.
The storyline started in the 46th issue of Archie's Pal Jughead, and reached its conclusion in the 50th issue with some follow-up comics in between.  The addition of Forsythia, aka Jellybean was sure to bring all kinds of new and exciting storylines... for about five issues.
So far, Jellybean’s remained a elusive presence, barely remembered, and was a recent addition to the live-action Riverdale show, which I have little to no interest in.  While that little footnote would remain a bit of barely memorable history, it also branched out to the Archie newspaper comic as well.

The first six strips from the week of May 10-15 are the earliest instances of pre-baby comics I could find, and I thought they would end there as quickly as they came.  But looking through further dates showed more comics based on the pregnancy.  They were really devoting themselves to this.

However, around June, the newspaper these comics were found in had large holes in their online collection, and I didn't have the time or sources to find alternatives.  Any that I've missed will have to be left to the dustbin of history.

Even at this late stage, they were still allowing audiences with the illusion of choice in the result.  And after the baby was finally born, they weren't quite yet finished milking the cow, even as the potential was dry upon delivery. 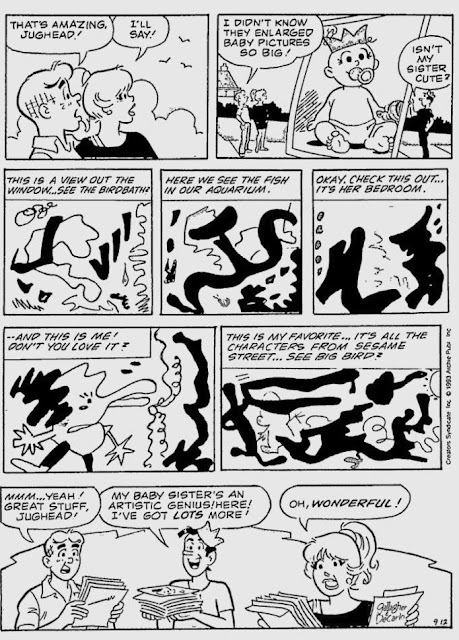