Steve Ditko, the reclusive Objectivist Randian artist who was responsible for the creation of Spider-Man, Dr. Strange and even Squirrel Girl, died.  Or rather, he was found dead in his apartment at the ripe age of 90, 2 days after he was found.  He also created Killjoy, who's quite positively his goofiest creation - and that's saying something.  He only showed up in two issues of E-Man, the complete stories which can be found here.  You can clearly see the Spider-Man acrobatic influence, even after he no longer wanted anything to do with the hero. 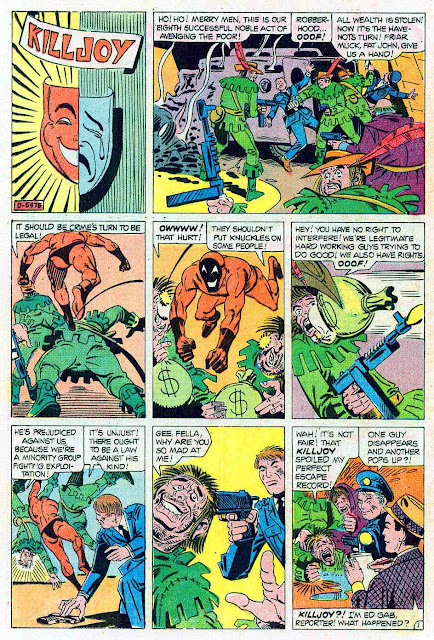 I won't attempt to decipher his interpretation of Randism that he latched onto with a fervority, though unlike others who adopted the philosophy of "It's every man for themselves!", he betrayed convention to form, and was simultaneously the crankiest curmudgeon and nicest person you ever met.  Given the clear Black-and-White nature of comics, it's clear that he found a home there, and objected to the corrupt underlying criminal enterprise that made up the Comics Industry, and only outletted his talent for comic properties he felt were truly worthy of his work. 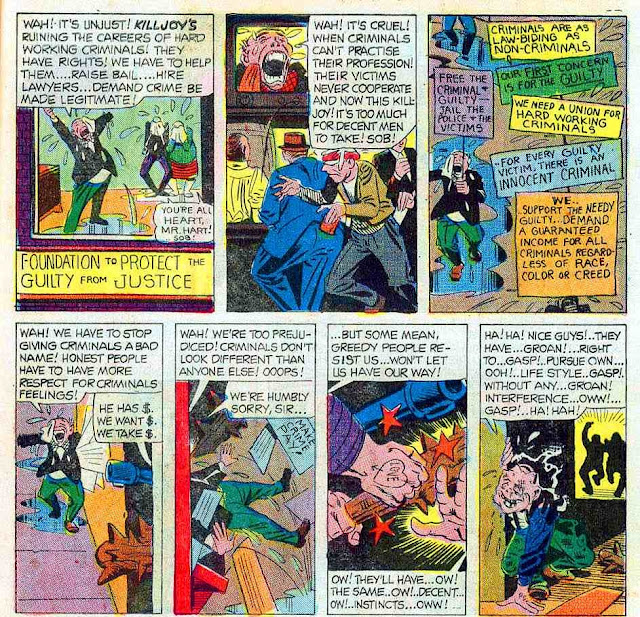 Just why he stopped working with Marvel will forever remain a mystery, though it's speculated that he had a falling out over Stan Lee's shameless huckerism and objected to his term of "considered" as in, "I have always considered Steve Ditko to be Spider-Man’s co-creator” before outlining the artist’s many contributions."  Now that he's gone, we're no closer to the truth, since Ditko was notorious for declining interviews (the last one being in ), and an urban legend that he turned down $1 million dollars for revenue from the Spider-Man movie.  (Why would Marvel hand over money to a weirdo freelance artist when they were so unfair towards Kirby?)  Given his tendency to snub his nose at money and only take on projects that caught his fancy, one wonders just how he managed to earn a living (apart from producing minicomics) from the artform that defined him.  Likewise, his comics could be a mixture of panels filled with brief dialogue / monologue bits, or dense reams of walls of texts that'd make Cerebus proud.  (Look at any splash panel of Mr. A)

Stupid Comics posted a scene in Chuck Norris Karate Kommandos where near the end, "the cast talks about "James "Shogun" Clavell's The Children's Story, an Ayn Rand-ish fable about a dystopian future America where children are brainwashed by an authoritarian collectivist dictatorship."  But there's a certain scene in the 2nd issue that I feel deserves a closer look: 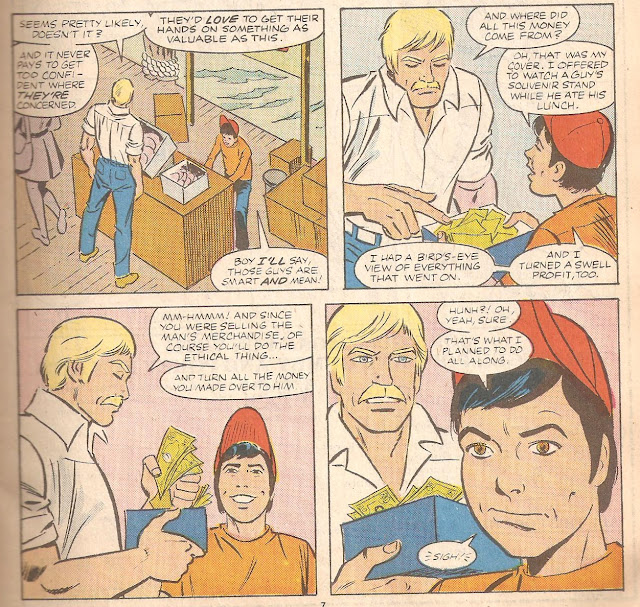 While he largely turned his back on the comics' world, that didn't stop his throes of admirers (who he was reluctant to lavish praise upon him, lest his head swell too large), and answering letters in his own inimitable way, all handwritten, no typewriter. 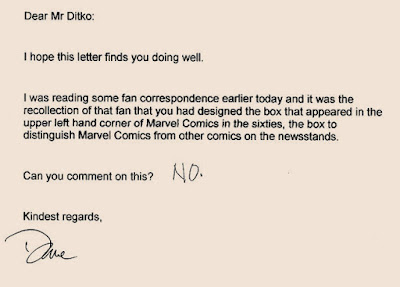 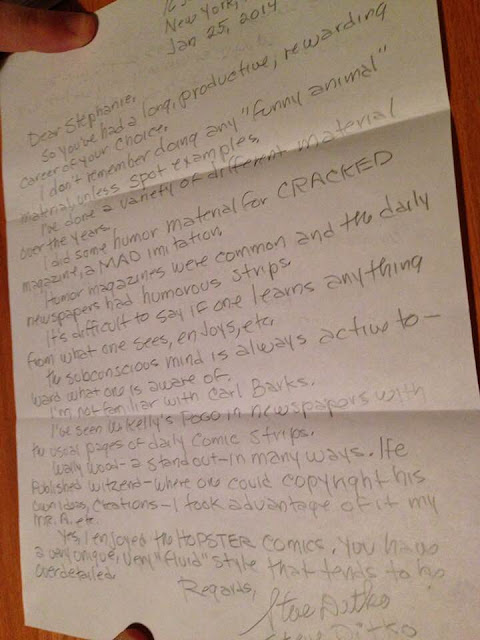 Probably the most surprising reveal from this above entry was that he had no knowledge of Carl Barks, the "Good Duck" artist.  Considering that almost anybody who gets into the business gets so because they started out via reading Uncle Scrooge comics, this is an amazing oversight.  It's like getting into the Newspaper Comic business without knowing who Calvin & Hobbes were.  (To be fair, Berkley Breathed had no knowledge of Pogo when he started Bloom County, and basically threw everything he could think of, breaking rules that he didn't even know existed)

Probably the best portrayal of Ditko's worldview would be from a short story originally published in the 160-page graphic novel Steve Ditko's Static in 1988: that was shown on Brietbart of all things - that is now offline, but I was able to save a copy of the 4-page piece of madness that you can see for yourself. 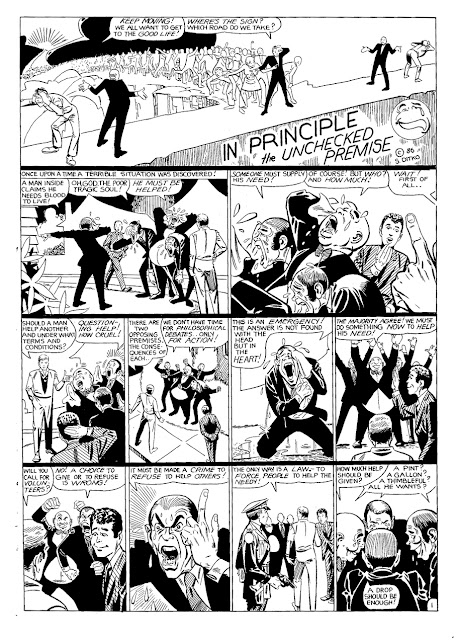 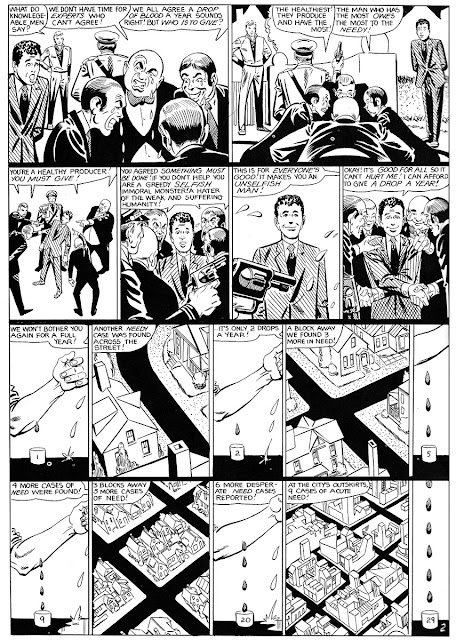 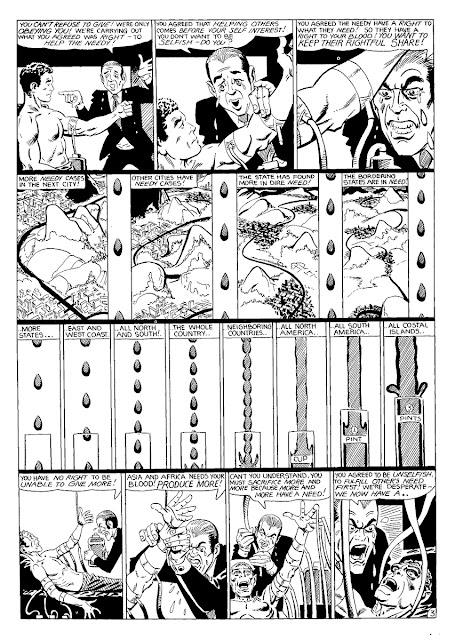 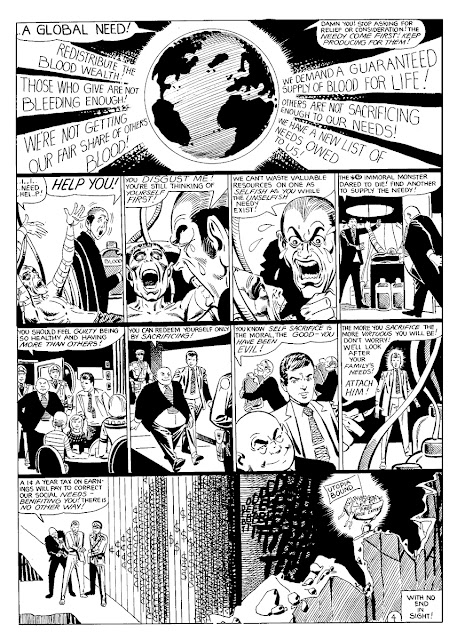 As with any Strawman argument, the story collapses if you think about it too much.  Having a single drop of blood taken from you once a year to help people worldwide isn't too bad a premise.  Where it falls apart is leaving this charitable donation down to just ONE man, instead of outletting it to MANY people.

Fun fact - for the longest time, I always pronounced his name as DIK-TO, not DIT-KO.  I wonder if anybody else had the same problem?
Posted by DeBT at 8:57 PM