A commonly quoted line that I was completely out of the loop of was the oft repeated statement where, after winning a particularly celebrated sports event (particularly Football) would be to have the lead athlete be asked "What are you going to do now?" who would then respond with "I'm going to Disney World!"  (Or DisneyLand, depending on the region)

Given the company's ultra protective restrictions of its copyrights, its astounding that any comics outside of their brand manage to reference them without facing the threat of heavy lawsuits.  So it came as a complete surprise when I came across an innocuous comic around mid-April when comics generally focus on Income Tax jokes.

This started off on April 11th, but didn't resume until almost a week later on the 16th.  In between were a bunch of otherwise unremarkable filler comics, save this one which I decided to share for posterity.
Then started the longest Hi & Lois comic that lasted longer than the last one, which I thought was an anomaly.

Though the majority of them don't actually reference the Magical Kingdom by name - just that the family is going on a trip, which seems to be a reoccurring theme when it comes to taking vacations.

Following the schedule, the storyline continued on onto Sunday, a rare instance when such phenomenon was much more common back in those days. 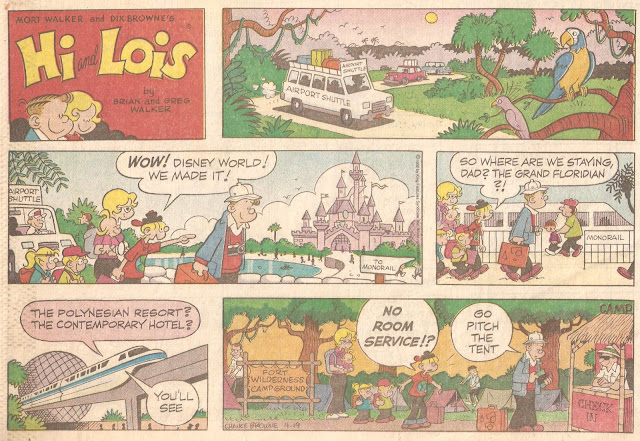 And starting Monday, after going to all that trouble to get there, readers were faced with this:

Disappointing isn't it?  All that buildup and we don't even get to see the family go on vacation in DisneyLand?  Well, the punchline there was somewhat prophetic, since the very next Sunday, we get a continuation of the storyline that seemingly abruptly ended. 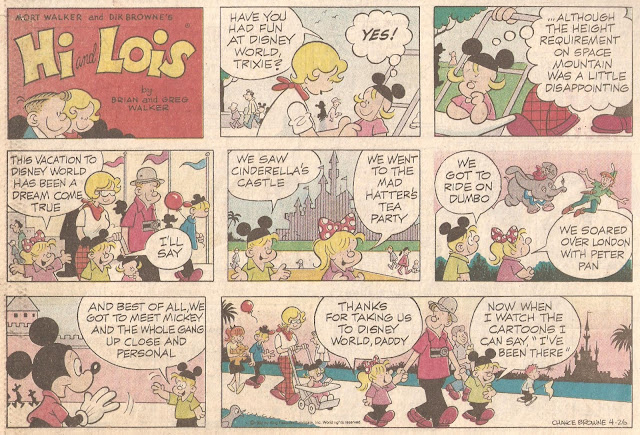