Some long-running Image comics concluded recently, and while they reached admirable milestones, there's a general sense of dissatisfaction that rests uneasily with me.  Chew had loads of wacky plots and subplots up the wazoo, with copious amounts of amusing background text for those paying close attention.  But there was a frequent tonal dissonance with the format that made it increasingly difficult for me to care. 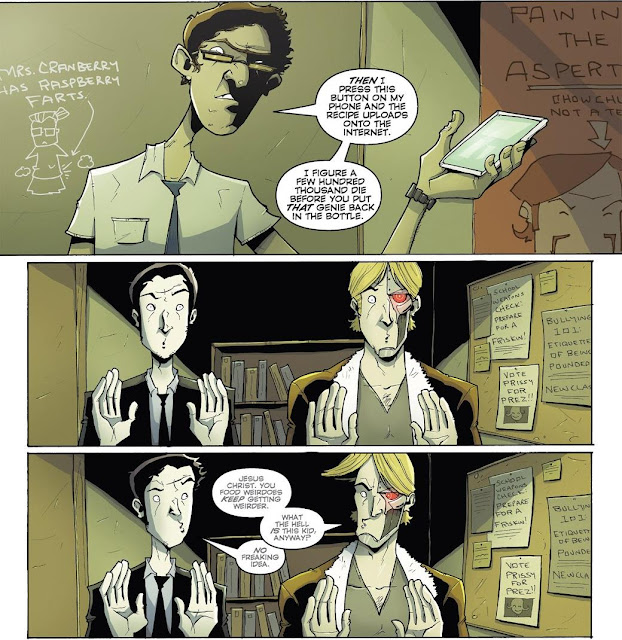 So many side characters were introduced with the implication that they'd be revisited later on, and then they never were.  They were mainly one-off self-contained playing parts that never really meshed as a whole.  One character, Peter Pilaf, who made sporadic appearances with a vaguely applied description of his Food Powers that was somewhat redundantly shown at the very last issue, when all other future conflicts were already resolved. 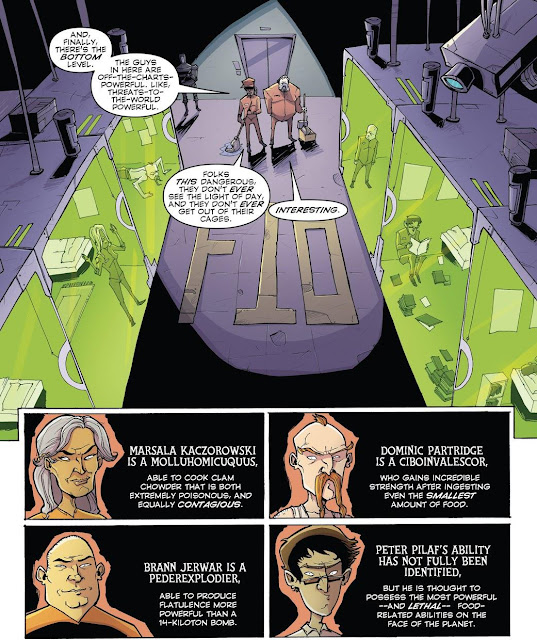 But that's not what I'm disappointed by.  The premise of Chew - a man who receives images of memories associated with things he eats - was laden with a very uneven tone.  That could be applied to its episodic format, which was supposed to be a sales pitch for a TV series that was never picked up, because, any attempt to adapt its formula would be a pale imitation of the source material. 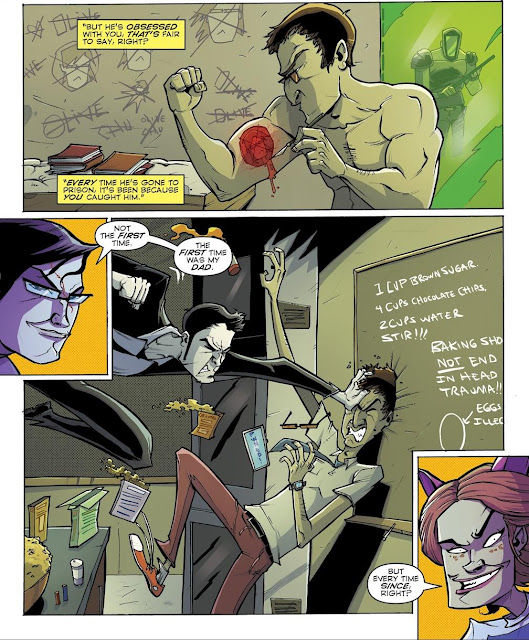 In the very last issue, which the author claimed was where the whole series was leading up to, having deliberately sprinkled copious amounts of clues throughout that would only make sense upon rereading, which wasn't made much easier thanks to Mason's (a Rogue Agent) constant long-winded rambling that would be incomprehensible and annoying for those not in the know.  Which would be often.  (Does the man ever like to hear himself talk)  So much had been made of this anti-Chicken conspiracy that any details behind the truth behind the big reveal would wind up being underwhelming.  As such, the ending wasn't exactly what I was expecting, and was somewhat of a letdown.  I won't spoil the exact specifics of what happened, but to explain in context, an earlier scene in the same issue made this statement about Tony: 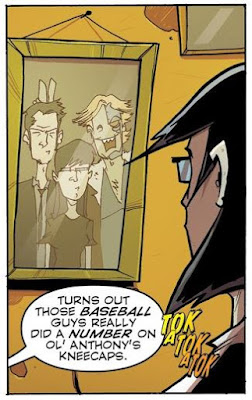 So, as a final act of defiance, what does Tony Chu do?  He leaps in the air towards his intended target, which I've helpfully censored out to avoid any potential spoilers for those who haven't seen the resulting scene themselves.  Needless to say, the ensuing events the man went through was just to engage a macho "Take That!" against those he felt personally wronged by.  While it may have been the ending the writer intended, it felt too Comic-Booky for my taste.  And by that, I don't mean engaging in wackyness for wackyness sake - the highlight was a Cyborg Chicken (Rooster, actually) - I mean that retribution was all that mattered in the end. 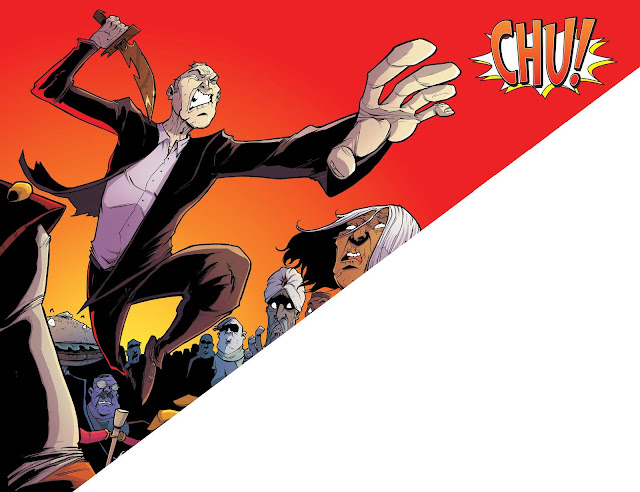 Moving on to Invincible, which ended earlier this year.  I won't go into the specifics of what happened, other than that the writer, Robert Kirkman seemed to be running out of steam and imagination, having devoted his energies to his other series, The Walking Dead, the comic I know of, and the TV series I haven't bothered with.  If there's a particular trait of Kirkman's writing that's particularly annoying, it's his tendency to have his characters expositionalize about themselves rather than have actual conversations.  For someone who prided in going into rather dark corners in his Superhero Universe, there were some paths I was surprised he didn't venture into.

First off, there was Dr. Sinclair who had a perchance of dabbling with dead bodies, making them walking soldiers, and applying the same morally dubious necromantic skills on the Evil Alternate Universe versions of the titular hero.  (A tactic that said hero, later grudgingly agrees with) 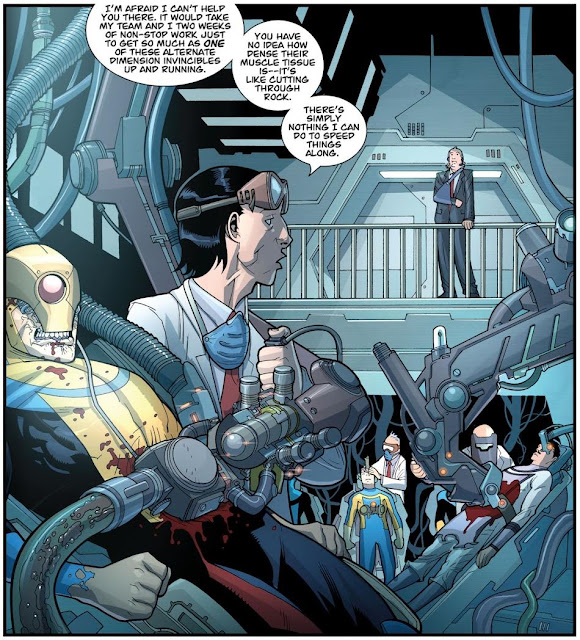 It should also be pointed out that the Aliens, the Viltrumites, were largely wiped out by a virulent virus that wiped out 99.99% of their population.  The number of their bodies were so massive that they orbited the planet they were on. 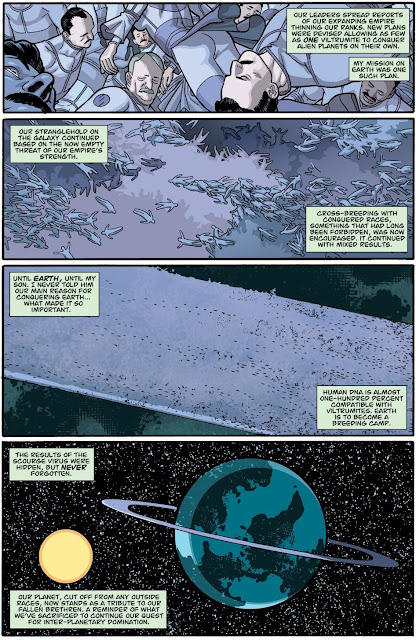 But then, the planet got blown up, and all the corpses got dissipated, so, no more dead bodies to abuse.  Yay?  Though if Mark had the foresight to make use of those bodies back on Earth, that could've been too much of a power imbalance later on.

But that advantage could've come in handy if Kirkman had gone the other route I thought for sure he was going to take.  Early on, Mark's Father was briefly exiled on a planet of Mantis people, whose lifespan was abnormally rapid, and his offspring grew up at an astronomical rate. 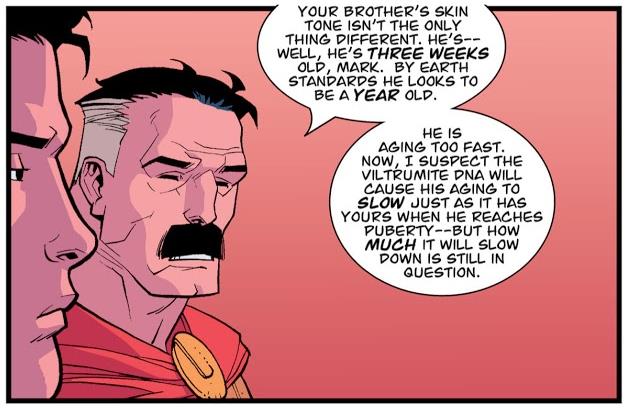 A tactic that Grand Regent Thragg later used to build his own growing army.  On his way to Earth. 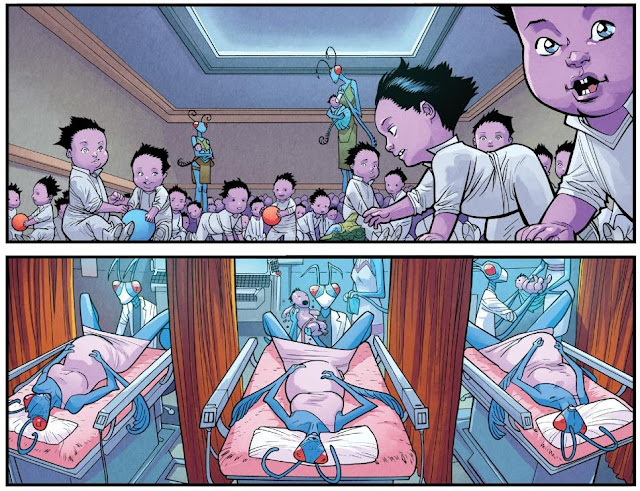 Now, on Earth, the heroes had been fighting these beings called Flaxans, who existed on another dimensional frame, where time passed in Narina time.  One year there would be equivalent to a few minutes on our side.

I thought that when Thragg made his way to Earth, he would've abused the Flaxan world to exponentially expand his army on a Bell curve of Moore's Law that would become increasingly impossible to counter.  By the time the first wave got through, there'd be a second wave that'd be an already advanced version of the army they'd just fought, with technology and intellect advancing at an unparalleled rate that even Robot would struggle with.

The only way I could see this battle turning the tide would be if the Flaxan side was already infected with the Viltrumite Virus that would prove fatal to anyone who was half-Viltrumite.  Unless Robot already set up that failsafe, even if it meant never returning back there.  If not, then injecting the virus there would be potentially suicidal, since anyone in the Flaxan world who escaped to Earth would wind up infecting Earth as well.  It'd be a suicide mission.

Probably why Kirkman didn't go that route, since it'd be rather depressing.  But I would've liked to see him make the attempt, rather than the (to me) half-hearted result that actually happened.  When your hyped expectations are in the stratosphere, the reality can sometimes wind up being underwhelming.

Having read some of Image's other properties, there's a deliberate adherence to the trade format, which I don't belabor them on - it's what the Comic Industry should be focusing on.  But their Companywide mandate seems to be limiting their writer's ambition to five-six issue monthly formats that centers around arcs designed to fit a certain format.  When you start to notice certain little verbal and visual tics across, it becomes more noticeable.  I couldn't specifically point out what in particular that trait is, just that it's easier to notice when you read multiple trades at once.
Posted by DeBT at 7:49 PM