Years ago, I gave tribute to OneManga, who was THE go-to site for seeing multiple Mangas without having to go to the trouble of downloading multiple chapters at a time to see whether these teaser images were worth reading in the long term or not.  At the time, OneManga’s sudden departure was bemoaned and decried over losing such a valued collection of scanlations gathered together all in one convenient spot.
Since then, multiple copycat sites have popped up, which I’ll decline to mention.  (Do you own research!  You probably already know where you’re going to get your next fix from anyways!)  One of the most prominent was Bato.  What made them noteworthy was not only their rapid rate of updates, but also for their giving notice to the numerous translation teams that were responsible for making such reading possible in the first place.  This made tracking down the numerous titles these people were in charge of much easier, and prevented plenty of stepping on other projects that were already being worked on.  If a project had been abandoned mid-stream, another team could reasonably pick up where they left off if enough time passed until then.

By far, the most prolific scanlator was the LHtranslation team, which would routinely give multiple titles of the now burdeningly popular Isekai genre.  For those of you not in the know, Isekai is where someone (usually a high-school student) finds themselves suddenly reincarnated or summoned to a Magical Medieval RPG realm where they’re bestowed with game-breaking powers, usually via dying.  In fact, so many of these protagonists have reached this Fantasy land from traffic accidents through a common denominator, Truck-kun.  Ever since Astro Boy, Japan’s traffic accidents have been registered to be safety hazards, with the added benefit of creating genocides in other worlds.  Take heart, random punk from Death Note!  You may have died for arbitrary reasons, but you were probably reincarnated as a God-tier character in another world, so it worked out well for you in the end!

As is the case with any dying craft, the last few hours of Bato were suddenly filled with multiple Mangas making one last chance to fan the potential flames of hope, that the embers might suddenly reignite.  This was especially prominent since the site remained up past beyond its Jan. 18th deadline, prompting uploaders to post as much as they could.

And then the image servers expired, making their contributions essentially worthless.  All that appears are the bolded letters CDN LAX, and even changing the image server using the gear option doesn’t help.  So it’s now official.  Bato is dead, and the shell will be gone by the 25th.  Until then, desperate addicts & hopers (like me) will keep checking back in the vain chance that it might make a miraculous comeback.  But short of someone acquiring the domain name without much hassle, it doesn’t look too likely.

Just before the impressive amount of Mangas finally went offline, I took a look, keeping an eye out for certain titles that caught my eye:

Dr. Prisoner - A Hanibal Lecter type psychopath with Black Jack levels of surgery.
Virtus - If one sadistic prisoner isn’t enough for you, then how about a whole prison instead?  All the convicts of this manly prison have been warped across time and space to fight in a Roman Colosseum because reasons of coolness.
Detective Xeno and the Seven Locked Murder Rooms - An amnesiac genius who intuitively knows multiple facts and trivial minutiae, but knows nothing about his past or how he came to be is enough of a cliche at this point that it deserves its own genre.  The first chapter has said main jerk genius figure out how someone accomplished an impossible murder on a - wait for it - baseball pitcher mound.  You can always count on Japan to have their implausible stories on familiar settings within photographicable sight.  He manages to figure out how the crime was accomplished, makes friends with the assassin out to kill him (not the murderer, someone else entirely), and meets his Moriarty... who promptly dies by someone else's hand.  And this is the first chapter! 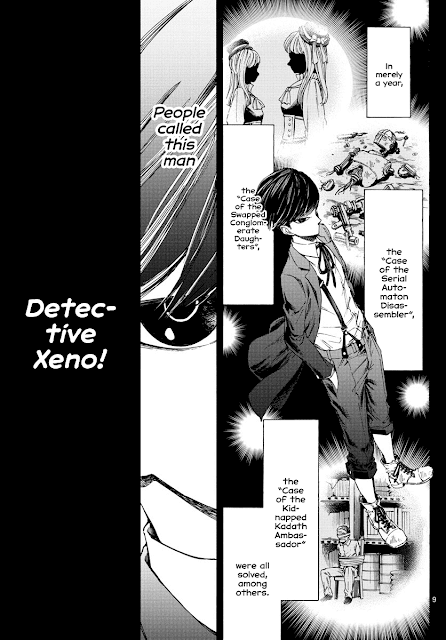 The World of Moral Reversal  - A quasi-Isekai, where a girl winds up hospitalized instead of killed, but when she wakes up, the gender values for boys and girls have been switched, where girls openly lust after hot guys behind their backs.  As such, expect plenty of examples of unflattering poses from a Female Gaze. 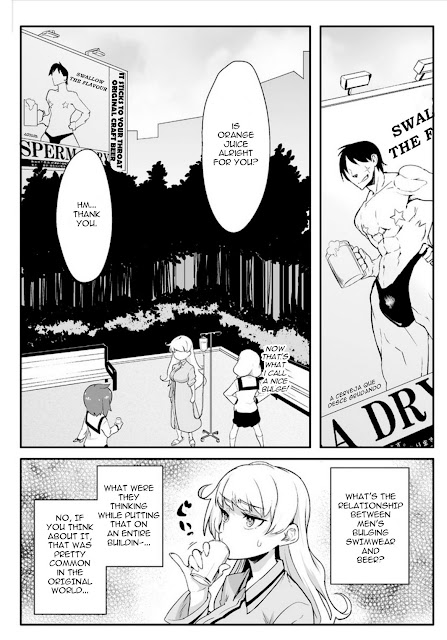 Dungeon Nursery - Another Isekai where a typical businessman is left to fend for himself, and his only weapon is to summon weak monsters that he’s supposed to help level up... but his monsters are weaker than he is.  In fact, the businessman who has NO fighting ability is able to beat up a Goblin that his low-level summon can’t. 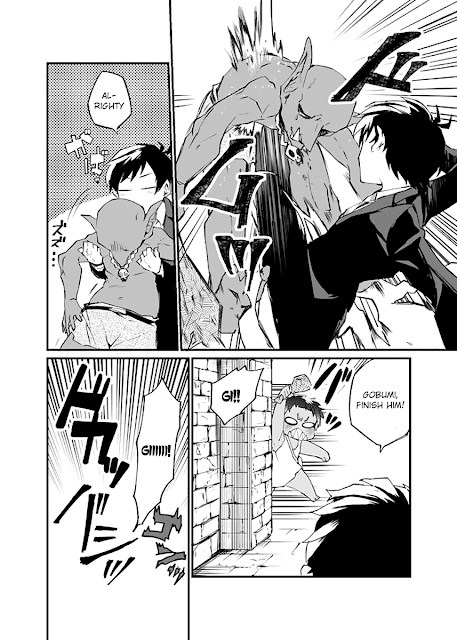 Goblin is Very Strong - Take the premise of One Punch Man, and apply it to a typical low-level schulb.  The above could also apply to Helk, a Comedy Fantasy where a buff He-Man character is in a contest for the right to become the new Demon King.  It was remarked for its incredibly fast scanlation, back when it was virtually an unknown.  It started out fairly humourous, but then became tragic with all the sob backstory coming out into play, and the continuous transformation of the Last Boss who kept changing form, names, motivations and Men behind the Curtains that finally finishing it was a cathartic event.
The Wrong Way to Use Healing Magic - Yet another Isekai, only, the High Schooler’s been summoned with two other Upperclassmen and is found to have an unnaturally high ability for healing, which is an absolute must in a world that needs to deal with its wounded, so he has to undergo intense training to not just ensure that he survive, but that he’s physically fit enough to endure whatever threats out there are willing to hurt him.  After all, the first rule when dealing with Mob Rushes is “Take out the Healer First.” 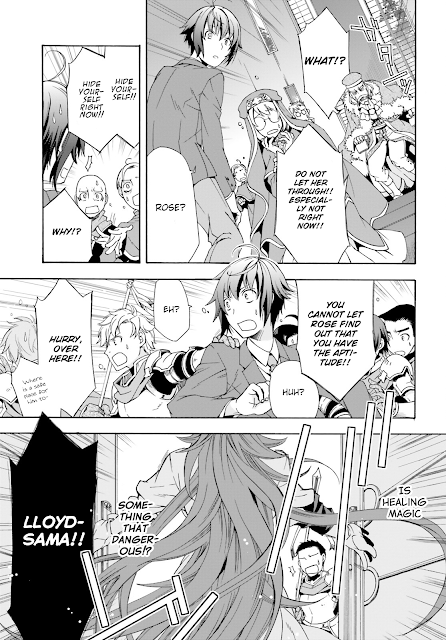 I Went to School to Be a Swordswoman, but My Magical Aptitude Is 9999!?  - Another overly long Fantasy title where the concept is spelled out on the tin.  A Girl sets out to become the best Swordswoman the world’s ever seen, only to find out to her horror that her natural aptitude lies not in beating plowshares, but in Magical ability.  Ironically enough, there was a similar Manga, I Said Make My Abilities Average, where the titular character wanted to appear normal, but her Magical ability was too high.  The difference was that the former was much more interesting than the latter, which presented the burden of genius and pressure to adhere to a talent that they’re not particularly interested in. 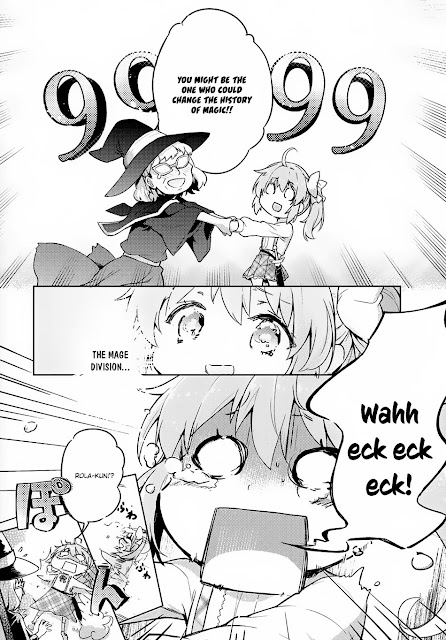 I’m a Slime - Satirical comic Anime News Nina had a strip that predicted that given the rate of Cute Superdeformed Girls being taken care of their Father figures, there’d be an Eventual progression where they’d become little more than Moe Blobs.  Well, this Webcomic has a literal Moe Blob.  But she's so cute you won't even notice, though you may need insulin later.

Kengan Asura - You know the insane Martial Arts Manga that is Grappler Baki?  Take that premise, and dial it from 11 to 12. 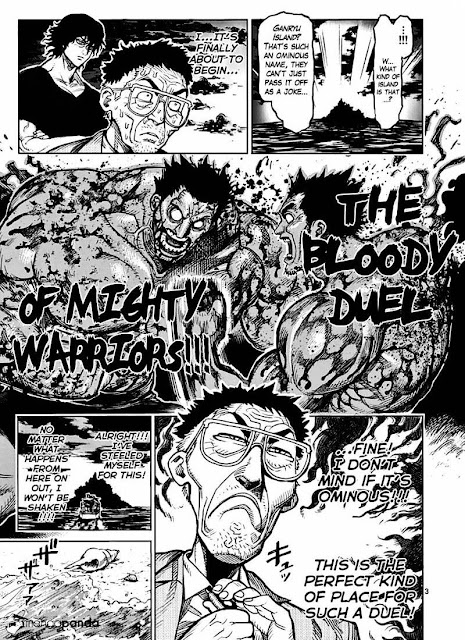