While looking for certain archived comic images, there are some things that pop up that are so unusual that you feel compelled to share them with the world and remind them that such things existed back when nobody was paying that much attention.

Superheroes have made a strong comeback in theaters after languishing on the funny pages for ages, but that's only after they distilled away the most essential elements, and removed all the overwrought narratives, the multi-story arcs that demanded intense attention and knowledge of what was going on in other books in the company line, and artwork that was wonky and incomprehensible at best.  (Nowadays, movies have the same creative problems that plagued comics, but that's a lecture for another time, preferably not by me)

The Superhero resurgence may have started with Blade, but the jumpstarter was Tim Burton's Batman, which radically changed the usual audience perception of the cheesy Adam West version, which was still fresh in the majority's mind, years after Frank Miller's Dark Knight take on the character.  That may have been in mind when the briefly revived Pogo strip by Doyle and Sternecky diverged in a brief parody that's just as overwrought with creative narrative bombast as the double-entendre laden monologue that influenced Tracer Bullet.  The first part (in colour) can be seen here: 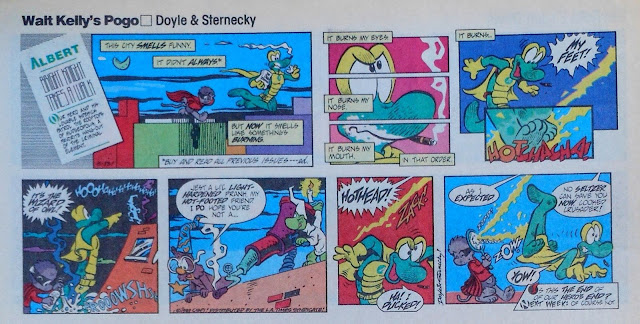 After this, things get a little trickier to figure out.  Sadly, the text is so faded away in parts that it's practically illegible.  Fortunately, I took a closer look and deducted most of what was written: 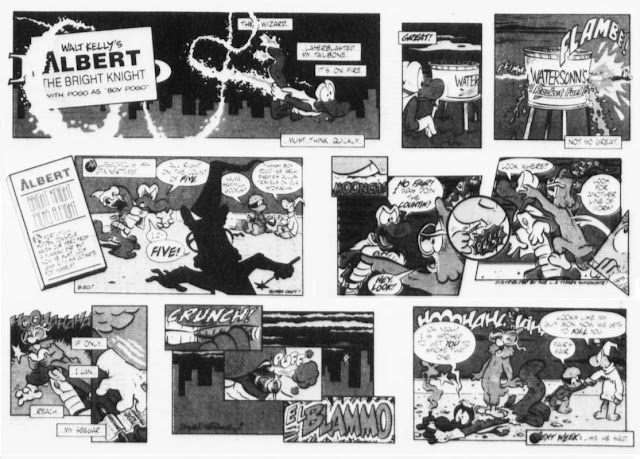 Panel 4: Bright Knight Picks a Fight: A fortunate sudden downpour saves our hero from a flaming end, but now he must lock jaws with the big ultimate foe himself!
Panel 5: Caption: Mudgeopolous at Dinnertime
Bright Knight: Alright, at the count of five.  1, 2...
Boy Pogo: Halfa sammich Goofus?
Goofus: Thanks Boy Pogo.  Us Arch Enemies allus travels on our stomachs.
Panel 7: 1989 OGPI! Distributed by the L.A. Times Syndicate!  (Until I found a clearer copy above, I thought the text at the bottom panel read: Must Obey! Receiver by The L.A. Times Syndicate!)

And that's where our adventures end.  If anybody wants to see the rest of the story for themselves, they're free to buy a physical copy of the six issues that supposedly make up this run.

Then, at the other end of the spectrum, we have some promotional material that are quite frankly, some of the most amateurish childish drawings ever done.  And the blotted black and white images of the quality coloured pictures don't help. 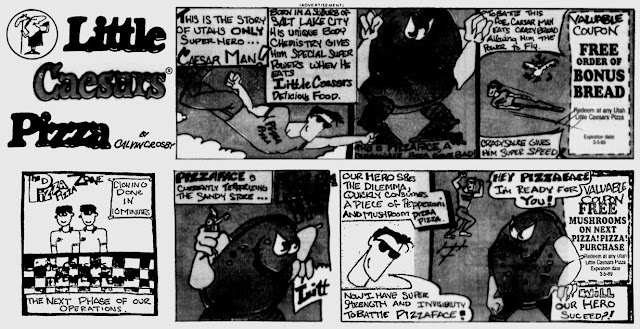 You'd think a franchise as large as Little Caesars would've been able to splurge for higher quality.  The left hand side is also take up not just by the title, but also an accompanying stand-alone panel that's just as amateurish as the rest of the comic. 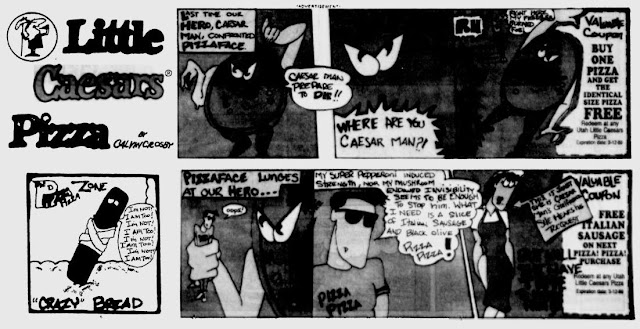 And like the Pogo comic earlier, it ends on a cliffhanger.  Good luck trying to find the conclusion to this thrilling epic, assuming anybody bothered to save a copy for themselves, and weren't embarrassed to keep one for themselves.  (If artist Calvin Crosby is reading this, I apologize for my unflinching criticism)  I'm not even gonna bother transcribing the inane script here, save for the last panel:

Panel 7: This is (sp)Sobt.  She is Caesar Man's Girlfriend.  She hears his request.  BUT WILL SHE SAVE THE DAY?

The Superhero genre has permeated everything from Archie to Garfield (who's more suited as the Caped Avenger than the Liefeldian Pet Force), but not everything deserves to be shoehorned into a specific formula, no matter how much diehard fans insist on saying so.  Further proving that not everything can be improved by simply slapping a spandex outfit over a persona in the vain hopes of attracting a wider audience, is the long-forgotten instance of Cheerios branching out its brand into the unusual field of two Laurel & Hardy types with the tagline of "It's Applelicious!  And Cinnamoncredible!" which never quite caught on, for some reason. 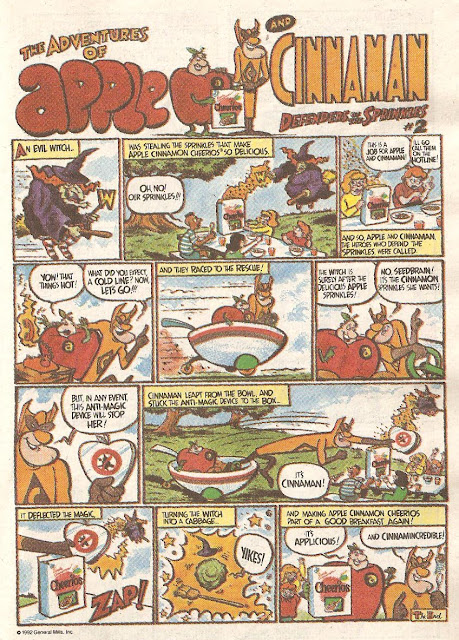 Most of their time is spent bickering over which part of the cereal sprinkles these bad guys are more interested in, the apple or the cinnamon, but it never lasts for long before they decide to whup some baddie's behind.  With minimal effort, mind you - it's not like they have to actually WORK for it.

Despite their potentially limited appeal, the height of their relevance ultimately culminated in a minute-long advertisement staring a very familiar-looking 'gator Kart-Racing Villain.

Save for those annoying sponsors on Sesame Street, today's kids don't even know what Commercials ARE.
Whether this should be lamented or celebrated depends on your fondness for unskippable jingles that   Media Watchdogs have been complaining about merchandise being solely targeted at children for ages.  But at this current rate, TV shows and movies that are naked merchandising adverts for comics, toys & cards are the only likely places for advertised commercial franchises to be seen in the first place. 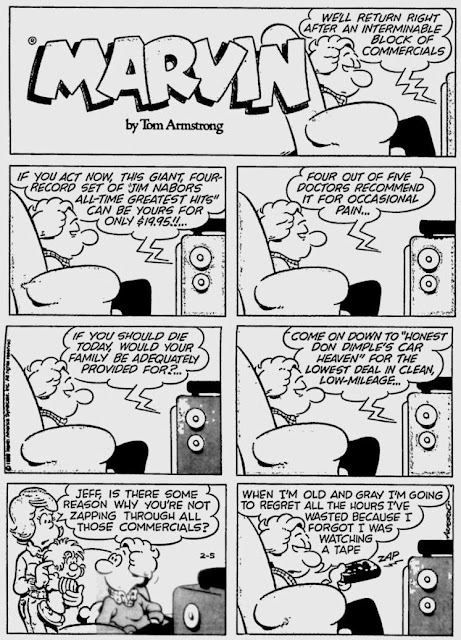