No One Likes Gaston

While I'm generally known for my Garfield Mash-ups, I've also made a few significant contributions to the other Mezzacotta comic site, Itoons, which focuses on other comics not related to Garfield.
Most of the available comics are minor edits to various online Newspaper comics and various webcomics.  But I can never do anything easy, constantly wanting to strain the limits of my imagination and a desire to stretch my creative muscles.

In addition to wanting to share my love and knowledge of certain comics, I also wanted to spread wider recognition of one of the more popular BD franchises out there.  But undertaking an endearing project is essentially taking an endurance test, especially for a labour-intensive project that's essentially a gag-a-day (or gag-a-week format if you want to be specific) comic that's still fully understandable without any translation notes handy.  Since the strips are fairly episodic - no long-lasting recuperations or ongoing story (save for a few running comic themes and occasional two-pagers) there's not much need or desire to know what happens next.

Apart from the occasional online scanlation, knowledge of this cult figure is surprisingly elusive.  Originally, I wanted to show it on my blog, but didn't want to risk any image shrinkage.  The comic in question is available now, but it's undergone the same limitations I was worried about in the first place. (I had a similar complaint when I submitted another Garfield comic that was ruined, because I decided to get fancy with the background)  So, as means of compromise, I've chopped up my submission in smaller doses for easier reading.  (It looks better at a larger size) 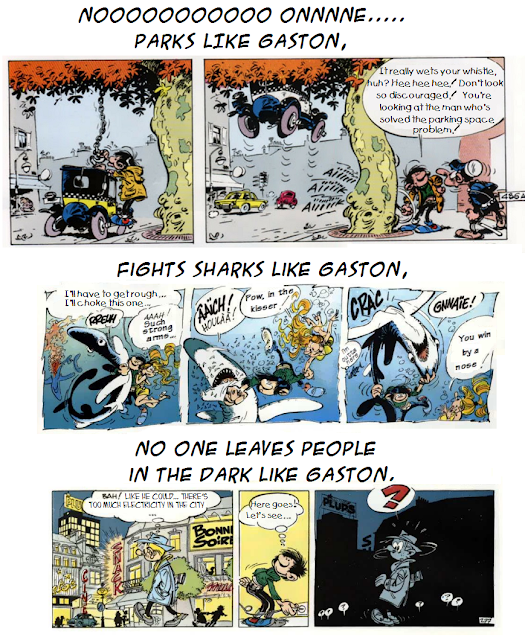 Translation for the parking comic partially helped out here.  For this particular verse, I originally wanted to use "Plays the Harp", as a way of introducing his musically destructive Gaffophone, but Harp doesn't really rhyme with Ark. 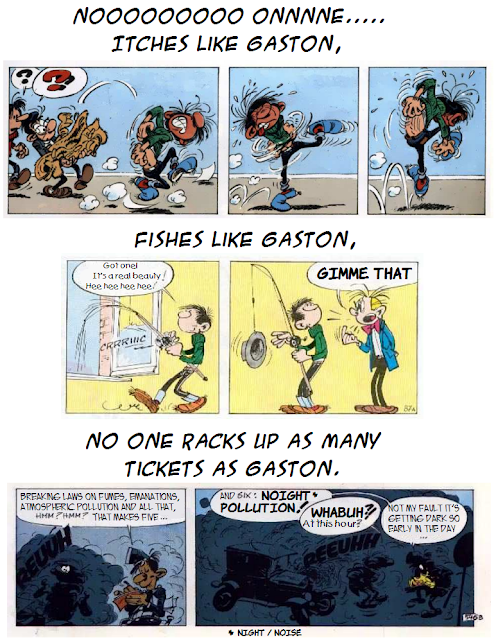 Here, I took some creative liberty with wordplay, combining noise pollution and night pollution into one nonsensical descriptive word that didn't exist until now.  (Then again, I coined the phrase Kvetchion too) 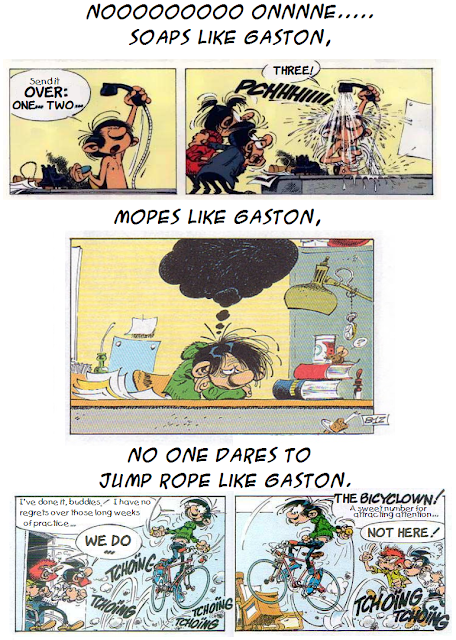 And yet, it looks like the cult favorite, Gaston Lagaffe may be getting an official English translation after all.  However, they're renaming the titular character as Gomer Goof, instead of his regular name to more closely appeal to Western tastes, I guess, and pay tribute to when Fantagraphics first tried their hand at translating the character.  Despite being associated with Goofy the dog, Gaston isn't exactly dim-witted.  He's just exceptionally lazy, extremely accident prone, fooling around at the office, creates loads of inventions that inevitably backfire, and is constantly getting in trouble over things that are second-hand consequencically, his fault.  In essence, like the unashamed ripoff, The Teenage Son, he's the worst traits of Archie and Jughead combined.

I suppose the name change is because of the unfortunate implications of being associated with another certain  Gaston "gentleman" who's better known for his hunting prowess and misogynist antagonistic views.  But similar names shouldn't be considered a handicap.  Nobody mistakes Sylvester the Cat and the actor of Rocky to be the same person. 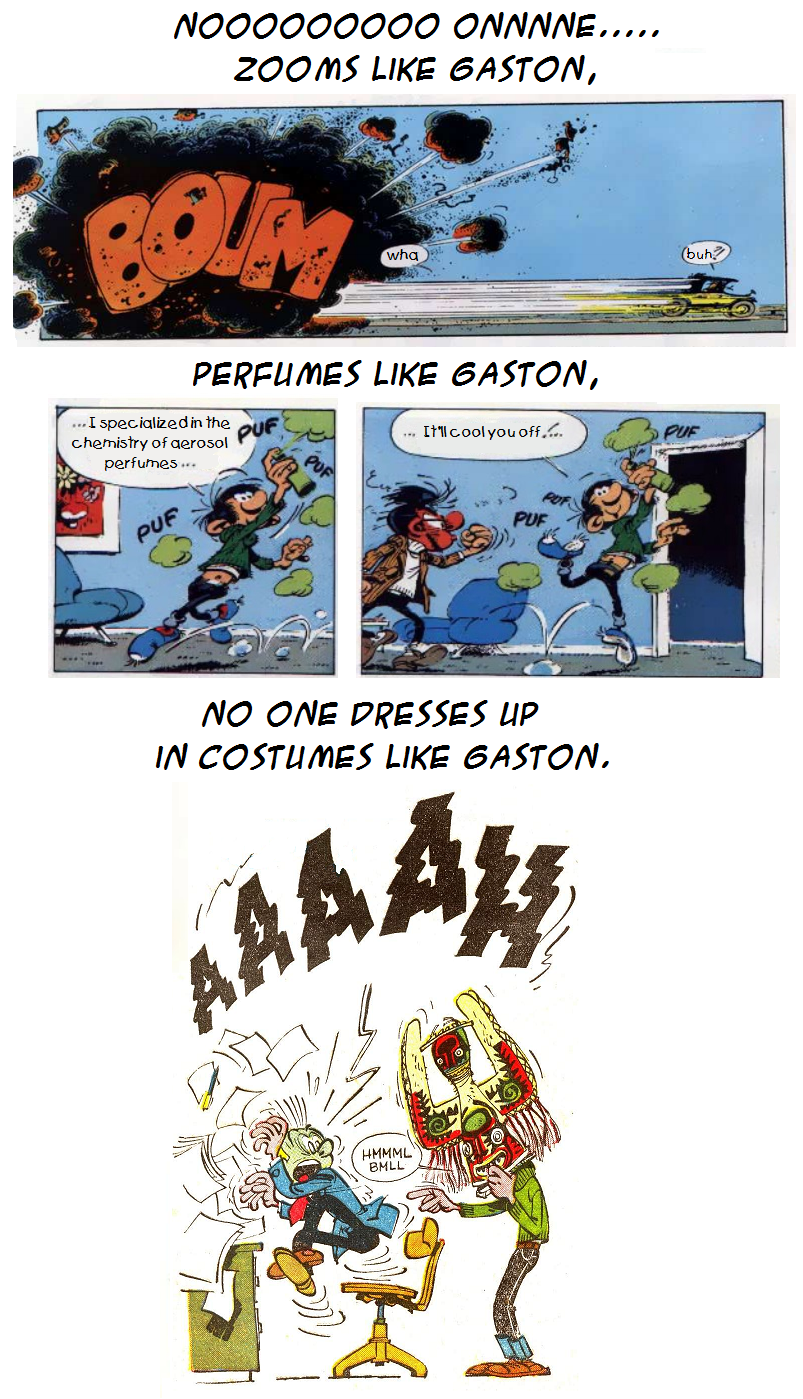 Believe it or not, this is actually a conservative elaborate disguise, compared to Gaston's later dress-ups. 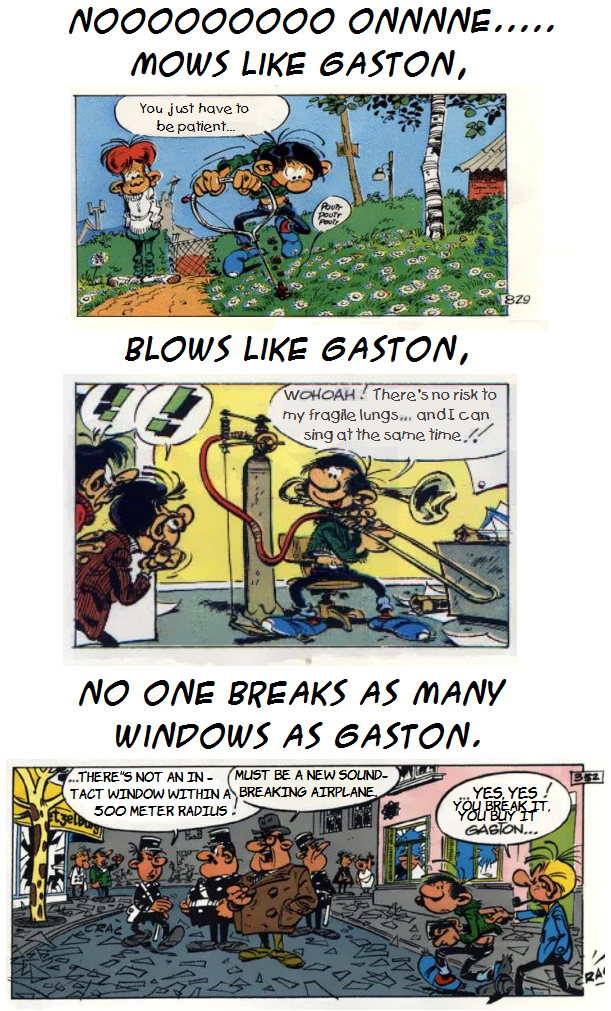 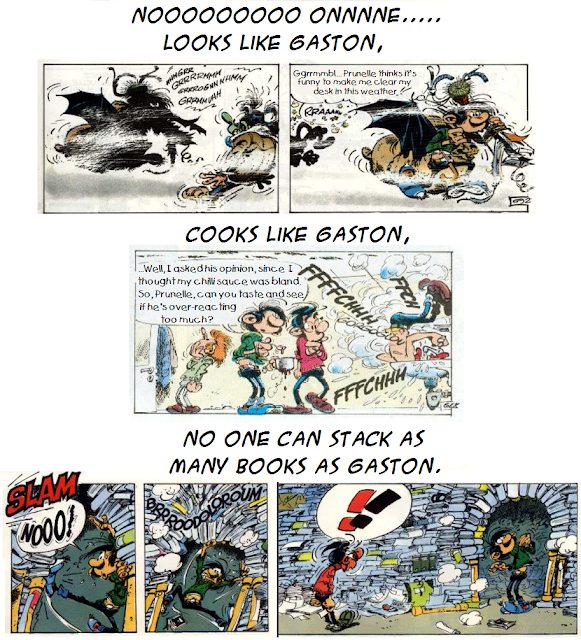 Another instance where I borrowed somebody else's translation, and used their editing skills, particularly Gaston's screaming "NO!", and removing the excessive 'N' at the end. 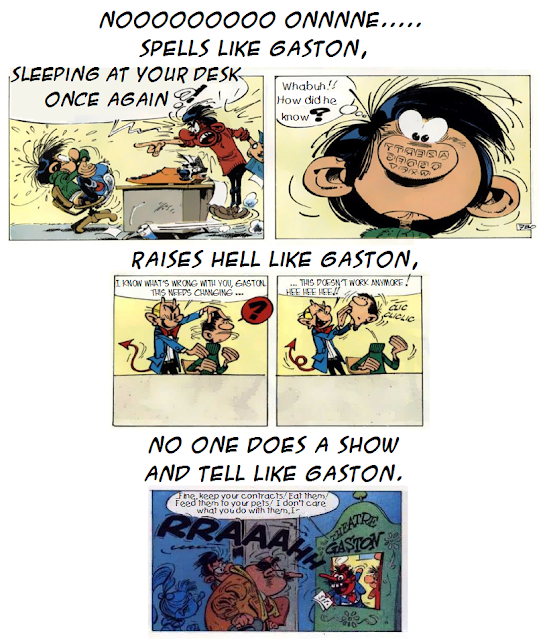 As is typical, when I send in an entry I've spent a particularly long time on, I instantly think of a new addition that could potentially be included.  Here's the bonus stanza that was excluded out of convenience, because I was having trouble thinking of a proper rhyme to go with "ell".  It's harder than you'd think!  The closest I came to a suitable one was "Rings Bells", but surprisingly enough, there weren't any Gaston comics with that particular image.  Likewise, I can't take any credit for the translation of the last panel here:

One of the self-imposed limits for submitting to Itoons is that there shouldn't be any connection to a typical Garfield comic.  In this case, I made an exception, implementing a subtle change alluding to a Sunday Garfield comic, but other than that, the rest is close to the original meaning and pure improvisation.
Posted by DeBT at 6:27 PM