Yesterday was famed MAD artist, writer and innovator, Al Jaffee's 96th birthday, who is still creating the infamous Fold-Ins for the Magazine.  At least, that seems to be ALL he does these days.  Long gone are the halcyon days when he would spout concepts such as Snappy Answers to Stupid Questions, MAD Inventions, and numerous silly concepts played out for laughs in his numerous gag books.

I figured that with the rapid loss of no less than Three MAD artists in 2016 - the influential unimitable Jack Davis, The subtle John Caldwell, and the slapdashy Paul Peter Porges, I should at least pay the man some respect while he's still alive and kicking.

If anything, the cartoonist's success can be contributed through his self-depreciative Jewish sense of humour, which played well to MAD's numerous take-downs of its quality, whether it was deserved or not.  A claim that was meant to foster rebellion against the high quality stuff that was supposed to be good for you, but has now become a victim of its own hype.  The subversive counter-culture that it so readily railed itself against has now become part of the culture itself, and it's weakest strongest imitator, Cracked, has now stepped into the very cracks that itself wouldn't follow into.

At the height of its relevance, MAD Magazine was noted for its biting Movie Satires that a commenter reflected, read more like illustrated reviews than anything.  They pointed out inherent flaws, plot holes, and warped logic happening on the screen - a trait that had a profound effect on Roger Ebert's harshly criticisms.  But in recent years, they've fallen into the wayside to focus more on guaranteed commercial hits with their Save the Cat! plots all figured out, so where can they put their criticisms aside from rehashing tired old jokes?  The lack of relevant commentary oftentimes feels hamfisted and missing.

The singular rally point surrounding the man will forever be tied to the deceptively easily craftable Fold-Ins, and its many imitations and influences.  I've lamented about Al Jaffee's lack of motivation regarding that field, so I won't rehash that old storming ground.  What I'd like to do is focus on a certain scene early in Jaffee's career.  His first book, titled (you guessed it!) Snappy Answers to Stupid Questions at the end, had a certain cameo appearance of a certain cartoonist that we all know and love. 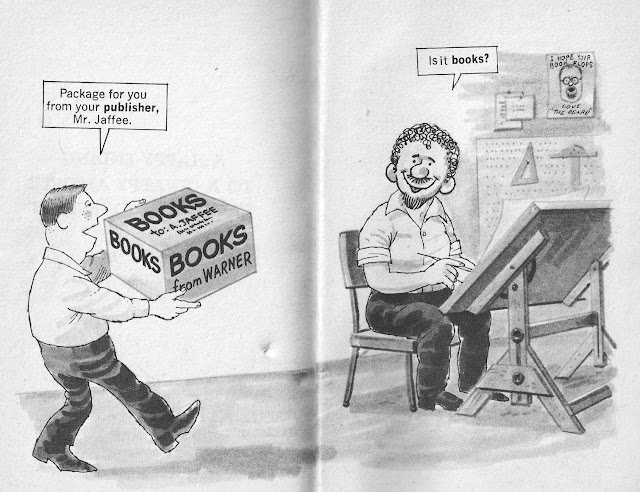 But an earlier version of this book (which I happened to pick up second-hand, after lending out my only copy to someone who wouldn't return it until years later), had a very different look about him: 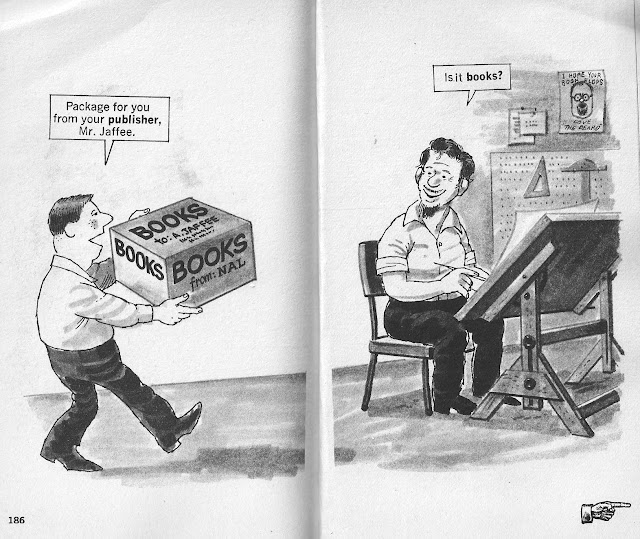 If you look closely, you can see the seams where the new cartoonish caricature is pasted over the old realistic artstyle to more closely resemble the iconic laughing figure we're more familiar with. 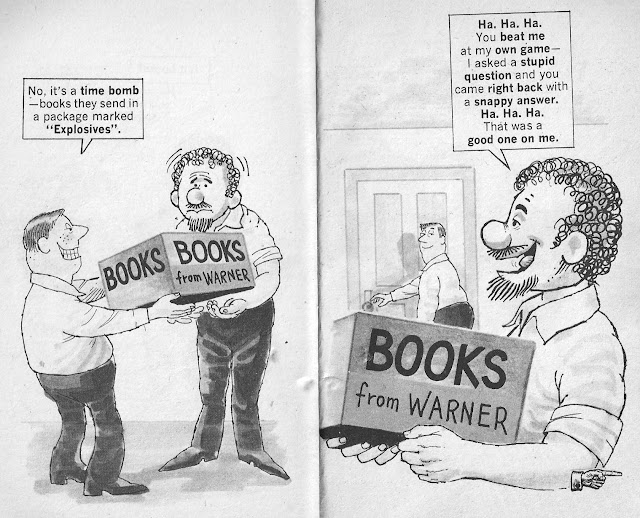 I looked around, and there didn't seem to be any mention of this disparity anywhere, hence my pointing this out.  Hopefully, I haven't breached a confidential contract that prevents Al Jaffee's actual drawn face being shown in public, lest his body melts into flames.*  Which shouldn't be that problematic, since he's drawn himself being beaten up, hung, choking, drowned, sawed, and blown up enough times to fill a theater stage. 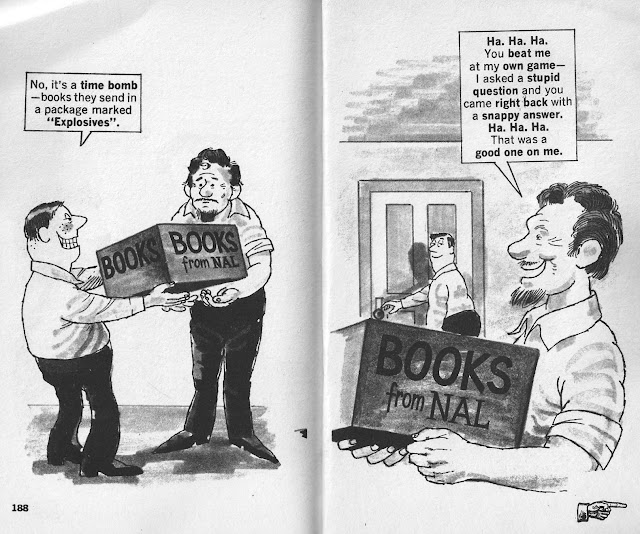 *(If such an incident occurs, I deny all responsibility)
Posted by DeBT at 8:58 PM