The Scope of Monkey Trials

Bud Grace's Ernie is one of the... stranger cult Newspaper comics available on the Funny Pages.  Later renamed The Piranha Club years later, after tricking the titular character in selling Yak Butter in Outer Mongolia.  It's vastly popular in Sweden, but a virtual unknown in the United States, save for a few fans here and there.

It certainly would gain more of a wider following if it wasn't so consistently Un-Politically Correct.  But so much of the fun comes from seeing how much the cartoonist tries to get away with.  Sometimes it works, and sometimes it doesn't.  In this storyline, the constantly put-down character, Ernie, decides to reduce his workload by having helper monkeys (or Monk-Eaze) in his apartment.

The story is already available online with higher-quality images (halfway down the link provided) but I'll be damned if I'm going to let my efforts go to waste.  If this seems redundant, keep in mind that this isn't exactly usual reader fare.  So Much of the first panels of Ernie strips are constant recaps of what's just happened the day before, because it's so unusual in the first place.

So very often, we're confident that Alien Civilizations would be able to easily communicate with us, no problem, despite the fact that our English Language is filled with contradictions, bastardizations of other languages, and a constantly evolving alphabet.  By that logic, we should be able to talk to animals like Dr. Dolittle, only with a Human accent.

And even if you DO manage to communicate with said animals in their own language, it's not always clear if they'll understand what you want and expect from them.

Ernie's Landlady, Effie is a senile woman who's been married 8 times, who has a tendency to cook the most unusual inedible meals consisting of various animal parts.

Believe it or not, a monkey is the Least of the Weirdest things Effie's cooked so far.  Many years later, she would attempt to cook a Gorilla, with less favorable results. 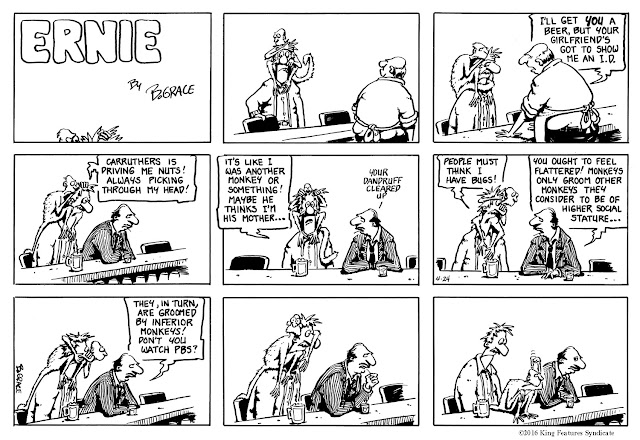 Strangely enough, this rare Sunday comic wasn't available in the above link, but seen elsewhere on the artist's site.  I included it here for relevance.

"NO FRATERNIZING WITH THE HELP!"
"You should've clarified that first."
"I SHOULDN'T NEED TO STATE THE OBVIOUS."
"Obviously, you need to."

Ernie's Uncle Sid is the consistent scene-stealer in the comic, who's essentially a conman in human form.  when he's not charging his cousin exuberant fees for shady deals or ripping off Elderly Ladies out of their life savings, and seeking ways to pinch a penny beyond it's expected life expectancy, seeking out the cheapest possible items on the menu... he's not doing much otherwise.  Considering his constant stinginess, you'd think he'd be rolling in the dough, but he seems to be more interested in wasting his moolah on gambling and beer.

The day of the Shotgun Wedding arrives (sans shotgun) and Ernie goes through the rituals in order to make a honest man (monkey) out of Carruthers.

Of course, Ernie's patience has its limits, and even he decides that he's had enough, and wants no further part of something he didn't want in the first place.  Hey buddy, you bought those Monkeys, you brought it upon yourself.

Fortunately enough, things have a way of resolving themselves out without their involvement.

However, this wouldn't turn out to be the last we'd hear from these Monkeys.  A scant four months later, the monkeys would return just as Ernie was in the midst of trying to convince his dowdy clingy Girlfriend that he's not worthwhile Boyfriend material.  (With lackluster results)

This later stuff wasn't included on the artist's blog (unless I haven't looked that far ahead), so consider this all-new material.

Never one to turn a profitable offer down, Sid takes on the role from Preacher to discount Lawyer.

The coffee is actually the least outrageously overpriced item on the fined list.  Uncle Sid once charged Ernie for multiple features (including the rear-view mirror and spare tire) on a broken rental moving truck.  (The left tire was missing)

"Be sure to speak loud and clearly for the clients and Jury."

And like last time, the problem is resolved by taking the path of least resistance.

Usually, throwing money at a problem doesn't make it go away, but it seems to work out in Uncle Sid's favor.  The bonus side is that he has very low resistance to straight-up cash.  It'd be almost insulting if he weren't so easy.
Posted by DeBT at 3:34 AM