Arcade centers may have fallen to the wayside, thanks to the proliferation of the home console market exploding in popularity, making quarter munchers something of a rarity, appealing only to the few outlets that still allow access to the mainstays that haven't been converted to the home video treatment yet.  Not that there aren't some diehards who won't stop at the opportunity to top the latest world record in terms of useless challenges. 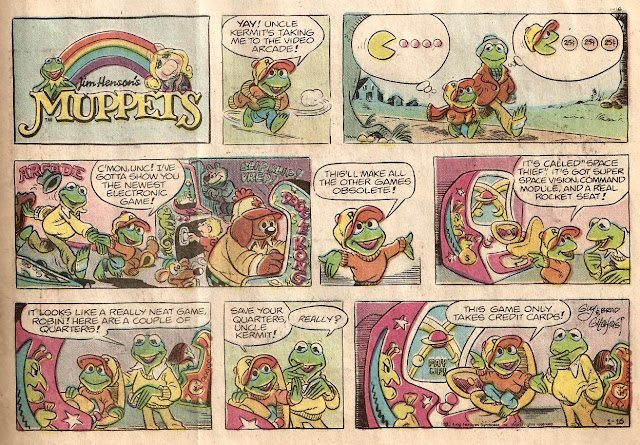 This has led to multiple instances of other media implementing their references without really understanding their appeal, such as Tony Soprano "playing" a lap of N64 Mario Kart one-handed just by handling the joystick without actually pushing any buttons.  (You need to use both to move)

including the Star Trek episode, The Game, where the whole crew was being subjected to being brainwashed by an addictive game that basically consisted of mentally throwing discs down funnels.
somewhat unusual for a futuristic utopia that prides itself on 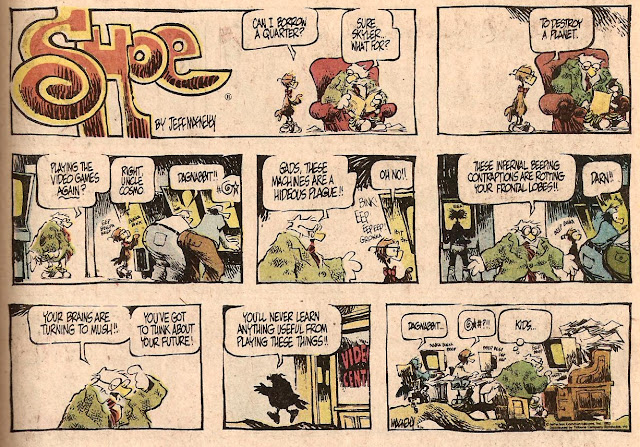 Probably the biggest insult would be the cameo appearance of Toru Iwatani, the creator of the instantly identifiable Pac-Man, who quashed his moment of immortality in an Adam Sandler movie.  (I'm not even gonna justify naming it - you can find it yourself) 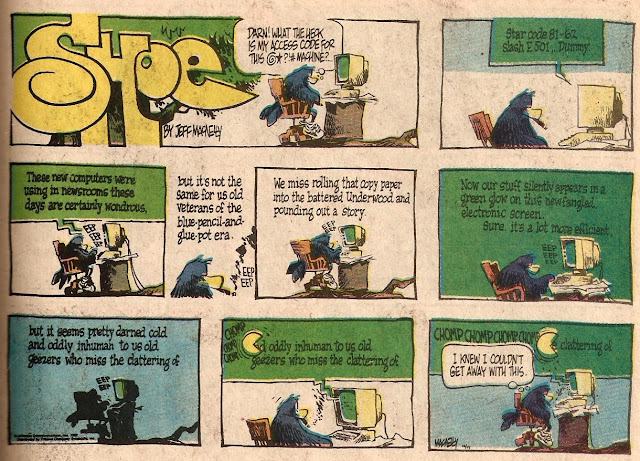 Then there's an outer-space Spider-Man story from Electric Company, that may or may not have been inspired by The Last Starfighter, where an average kid who's really good at a Space Invaders-esque game finds himself roped into an intergalactic war, because reasons. 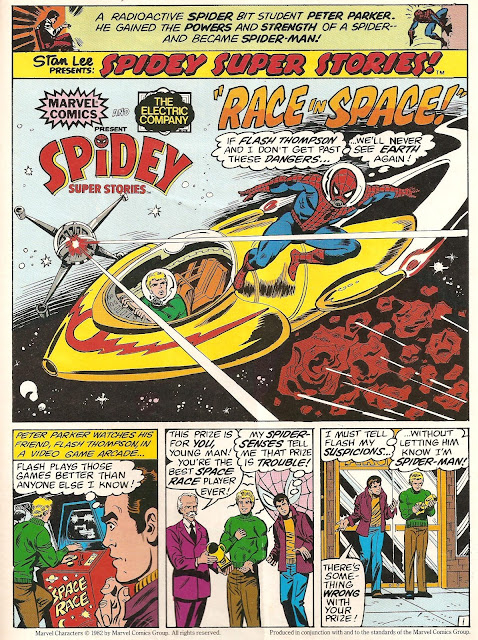 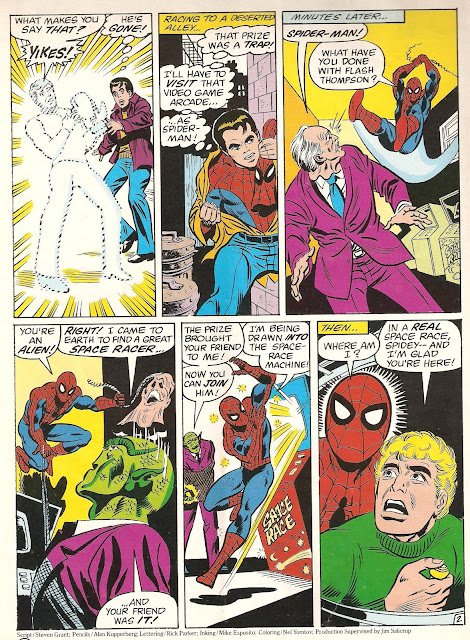 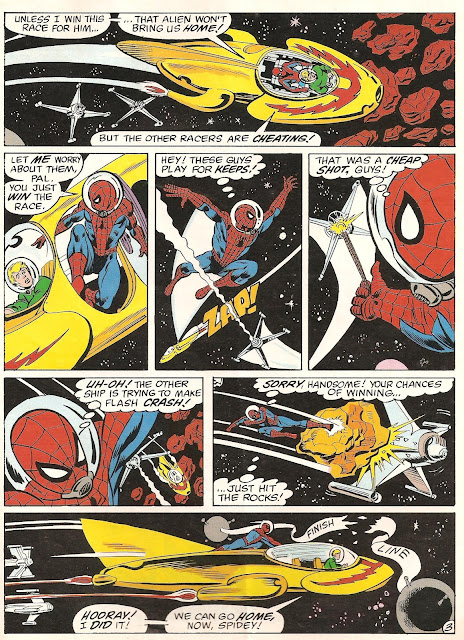 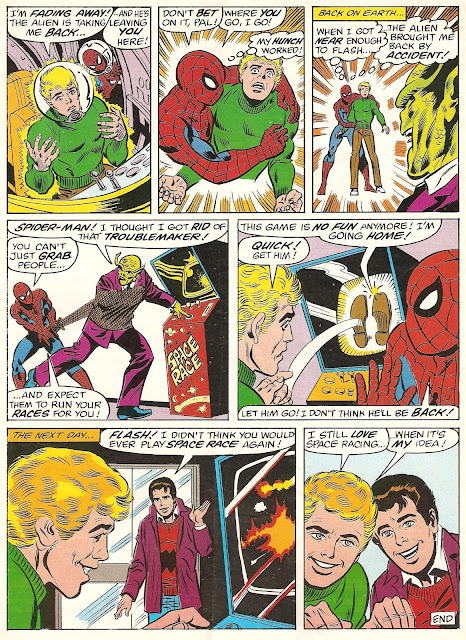 And yet, despite dozens of genres ranging from Platformers, Street King Fighters, Puzzle Droppers, Rail Shooters and the lot, the go-to representation of console games seem to be the ol' blast-em-Commies-outta-the-sky edition. 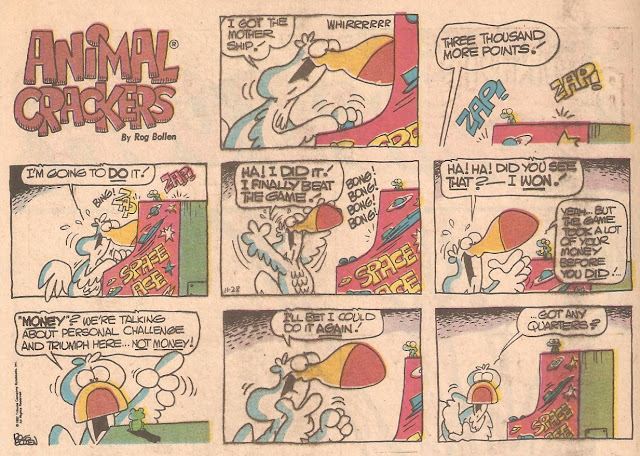 The demonization of Videogames is nothing unusual.  People have been complaining about how the latest newfangled devices these ungrateful younglings are abusing to their whim will bring about the downfall of civilization as we know it.  Well, they're technically correct, since these lawn-standing children are rewriting the rules of the previous generation that will pave the route to the NEXT batch of unforeseen upgrades, which will carry their own baggage of complaints from future Luddites. 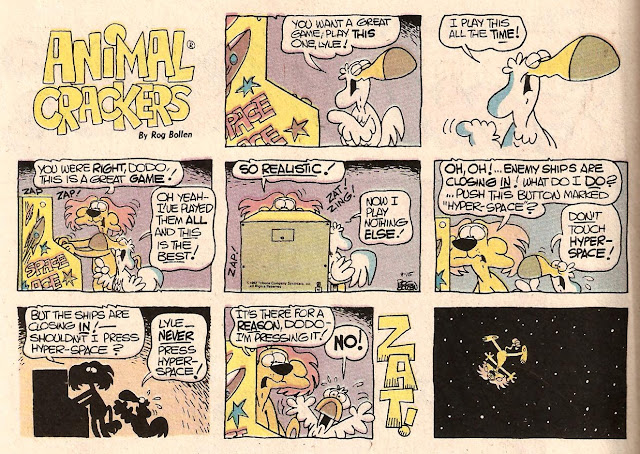 But it's not so much the rush of playing the games themselves as is the sense of accomplishment of actually succeeding in a monumental repetitive task.  After all, if Video Games were as mindless as everybody says they are, everybody would be passively pushing buttons waiting for their turn.  In The Game Believes In You by Greg Toppo, an adult tried his hand at playing a typical gateway game, and was surprised at just how difficult it was.  (Granted, most beginner console games were Nintendo Hard)

It wasn't just the learning curve of having to readjust his preconceived notions of hand-eye coordination, but also the intense amount of concentration needed to get through a typical level.  He was surprised that despite his apparent smarts, that he was having great trouble at re-learning new traits that for all intents and purposes, should've been deceptively easy.  If you pay attention to a gamer's expression while they're playing, they intensely focused on the action happening on the screen.  (Unless it's an unskippable cutscene, at which point, they're just waiting for the mini-movie to finish so they can get back to the action) 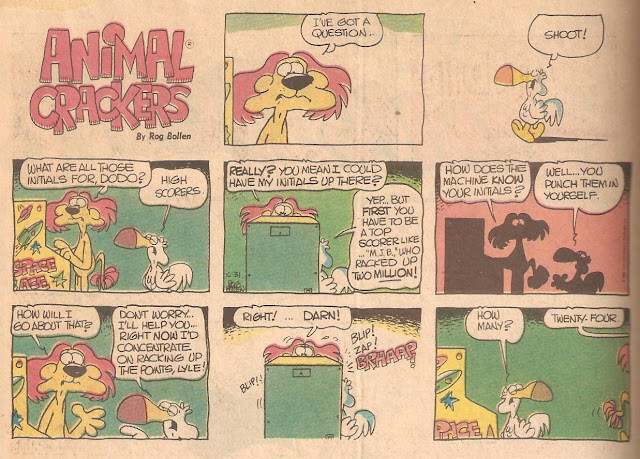 Indeed the purpose of a good game is to force the player to keep trying over and over, compensating for their mistakes until they succeed in overcoming their surmountable tasks.  The very first Mario game level is easily recognizable and iconic, but it was actually designed near the end, so Shigeru Miyamoto could properly showcase everything the beginning player needed to learn about the basics of playing.  (Though it took a computer ages to learn what came naturally to grade-age kids)

Despite their high degree of difficulty, the game allows you to try again over and over until you manage to succeed, all for the sake of that elusive A WINNER IS YOU! end screen.  This is accomplished by memorizing dozens of patterns, calculating various formulas, testing strengths and weaknesses, using items in every conceivable combination possible and deferring to the game's internal logic, usually consisting of warped reality that naturally appeals to kids.  (And resorting to cheats when they're ultimately desperate) 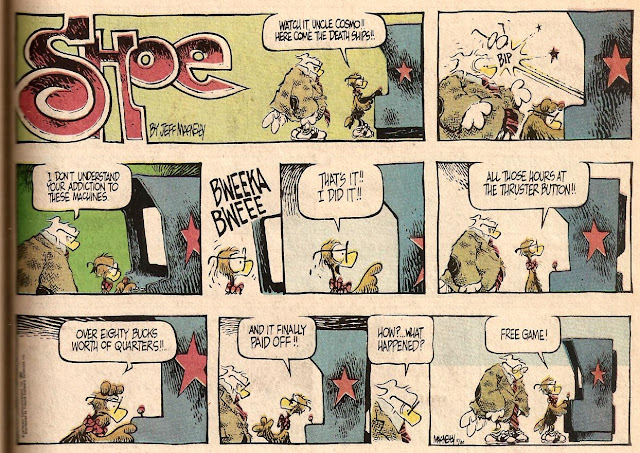 In fact, because of the way games are made, the techniques and tricks you use to get past creative enemies, obstacles and traps in later hair-pulling stages are designed to gradually teach the player how to develop these traits and integrate them into their playing without being fully aware that they're learning.  In this sense, videogames are actually better teachers than most schools.  (And more fun too)

Another worthwhile quote - If schools were relied on to teach children about Pokémon, they would lose interest almost immediately.  Part of the reason is because when schools were first designed, they were intended to be suitable for children whose highest aspirations were to become factory assembly line workers, whose iteration of input and fixed formulas was a necessity.  But the latest appliances and digital devices have largely supplanted that need, resulting in teachers having to dictate an authoritarian stance over unruly children.  The earliest concept of a school worked just fine in the early 20th Century, but their model no longer applies to the modern world.  Everybody learns in a different way, and expecting everybody to conform to a single model is just asking for trouble.  Nowhere is this more clearly stated than in Japan's schools, which is more suited to produce Businessmen who are more likely to be brown-nosers and yes-men than innovative trailblazers.  In fact, the lack of harmony between Sega USA and Sega Japan was because one company was willing to take risks, and the other wasn't.  (As seen in the Sega Vs. Nintendo book, Console Wars)

Rather than demonizing the infantile traits of empowering videogames, scholars should be using the traits of videogames that best appeal to their senses.  Rather than have everybody in the class compete with each other over who gets the highest marks or best memorization, singling out the class pets, fostering an epidemic of cheating and stress, it would benefit greatly using a Warcraft model where struggling students can get farther ahead by working together.  Instead of grading students over an outmoded grading system where mistakes are seen as a black mark demerit that'll follow them for the rest of their lives.  They should be given the chance to experiment with alternate solutions that best suits their needs, substituting calculating methods with more adequate means, where they can take their time to fully understand the logic ingrained behind the theory.  Following formulas is good for starters, but shouldn't be strictly restricted to only that if the students already understand the basics, and compensate by using similar models closer to their line of thinking.  There's not just one way to calculate algebraic math.

In one instance where a student was failing in a particular field, another student offered themselves up to compensate for her loss, even though it meant losing some points himself.  The purpose was to teach how to game the playing field so that everybody gets their fair share.  In other words, compensating for their weaknesses until they're able to confidentially assert it themselves.