Okay, everybody out there knows that Nuclear Power is incredibly powerful, right?  And that power is accomplished by shaking microscopic atoms very very very hard, right?  Which if leaked through the high vibrations that the containers that are meant to hold them in, could cause potentially high damage not just to puny humans, but also to the environment, right?  Fukushima is still a toxic wasteland years after their meltdown.  Radiation levels were so toxic that they were causing helper robots to malfunction within hours within the infected area.
So, given that Nuclear power is notoriously risky to play around with, let alone use as a blunt instrument, it's tellingly shocking that Trump sees the last resort option as his first resort, being woefully ignorant about their use beyond "Wiping ISIS off the map", since the consequences extend far beyond "Killing ALL the Bad Guys". 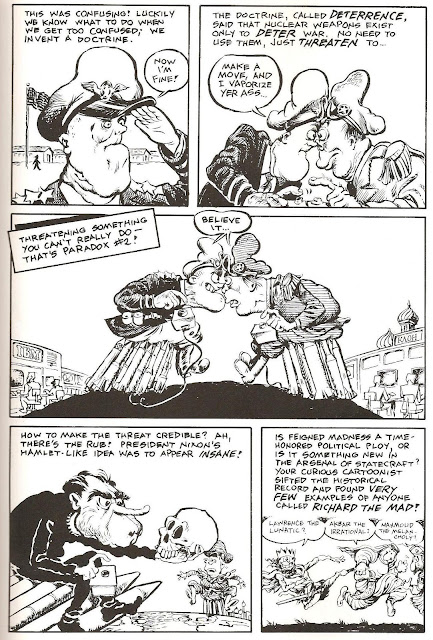 Recently, of all the leaks that've come out of the Trump office (and there are MANY), the most disturbing may be the account of the dialogue to Russia that was supposed to be left unrecorded.  (Presumably so that they could narrow down the source of the leakage, but more likely so that the conversation between Trump & buddy Putin would remain private)  The fact that there are people willing to risk their short careers by unveiling details should give some hint of just how troubling this talk went.

To start with, Trump seemed to be completely caught off guard when queried about what constitutes a Nuclear Triad, which was something that was expounded at length, given his ignorance about the subject:

Upon being queried about what Trump's opinion about START, believing that any deal Obama made could be anything but bad, his first instinct was to demean it, and vow to repeal it, despite not knowing what it was FOR.  For those of us not in the know, the New Strategic Arms Reduction Treaty is supposed to agree on the number of Nukes each country has and is allowed to have.  Trust on both sides is mandatory to confirm that neither goes over the limit.  And despite wanting to be on Putin's good graces, Trump just pissed all over that possibility without understanding the consequences. 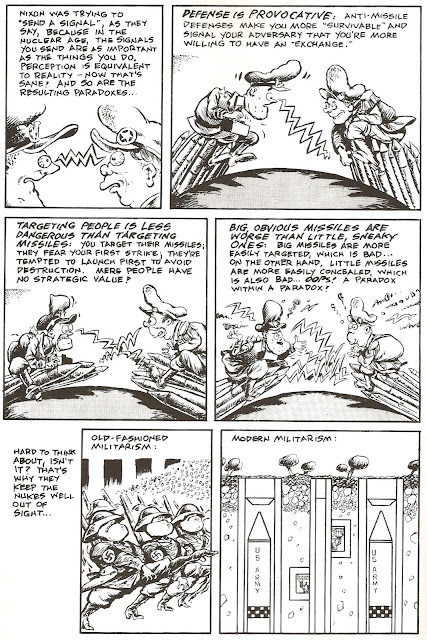 I don't pretend to know more about Nuclear energy than I actually do, knowing the limits of my ignorance.
But Trump continues to blaze ahead, filling in the gaps with meaningless founts of knowledge to cover up his lack of such.  Eventually, those constant bluffs are going to bite back and backfire hard (if they haven't already)  If you ever wanted to relive those turbulent times in the 80's when the threat of Nuclear fallout was a very real thing, here's your chance to experience that anxiety all over again! 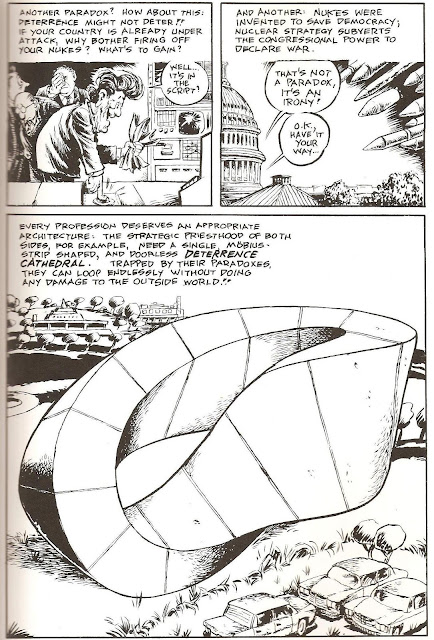 Like his tendency to handwave away meaningless answers to essay-length questions, just as unnerving is Trump's tendency to ask probing questions to the least qualified person capable of giving an appropriate or right answer.  Instead of asking a Financial advisor about whether a strong dollar was good or bad for the economy, he posed the question to a Military General, who, while "quite intelligent", is the wrong person to ask a question far outside his field of expertise.

His insecurity and short attention span (being unable to process any briefings longer than 9 bullet points on a single page) along with changing the subject back to familiar ground, stems from his narcissistic need to appear like he's in charge.  A regular control freak who has no control over his "kingdom" that doesn't show any respect his way, because he never showed any to anyone.  A far easier way of dealing with this personality conflict would be to approach him in the same manner of All-Knowing Emperors - showcase any said subject under the assumed assumption that Trump already knows all about the subject, without actually alluding to his lack of knowledge using a refresher course.  "As you already know..." "The situation is like this..."  "In your infinite wisdom..."  Basically appealing to his vanity.  Of course, that'd only work if Trump was willing to accept any views that extends far beyond his limited scope of the news on TV and inside his mind.
It's astounding just how quickly Trump's managed to fritter away his Honeymoon period.  Normally, you'd see this kind of breakdown around a President's second or third year, when the bloom has fallen off the rose.  But Trump's ineptitude has created public dissatisfaction at warp speed, causing large unrest throughout the whole country.  Even Nixon who forcibly resigned Attorney General and had leaked private tapes, at least had intervals of months between scandals.  But Trump doesn't even let up or allow his numerous scandals or critical failures to breathe.  The result is a breakneck runaway of consistent failures that's not helped by his whiny crybaby complaining over every slight, no matter how small.  Trump's mannerism has declined to the point where even his diehard fans are beginning to doubt his ability to deliver on his insane promises.  They paid more attention to the rants of "Locking Hillary Up" than his statements to Repeal Obamacare, which, they're only just beginning to understand the consequences of losing.

Given Trump's tendency to pay attention to favorable ratings (obsessing over Obama's Inauguration crowd being larger than his), it's not a farfetched claim that his team would be willing to allow Terrorist attacks on their home soil, just so they could "prove the protesters and naysayers wrong".  Especially after the botched Yemen Raid that wound up killing 30 civilians, including an 8 year-old American girl and a Navy Seal, and the target got away anyways to taunt Trump another day.  That operation can't have been easy on Trump's ego, especially after constantly harassing Hillary over her Emails that led to the ineffectual investigation on Benghazi and her emails.  Considering the sheer hypocrisy of Trump's team using their personal communication devices rather than switching to more secure Government ones, after firing their Cyber-security   (because Rudy Giuliani, former Mayor of New York is such an accomplished computer-savvy guy), the whole team is in direct danger of being abused by unscrupulous hackers. 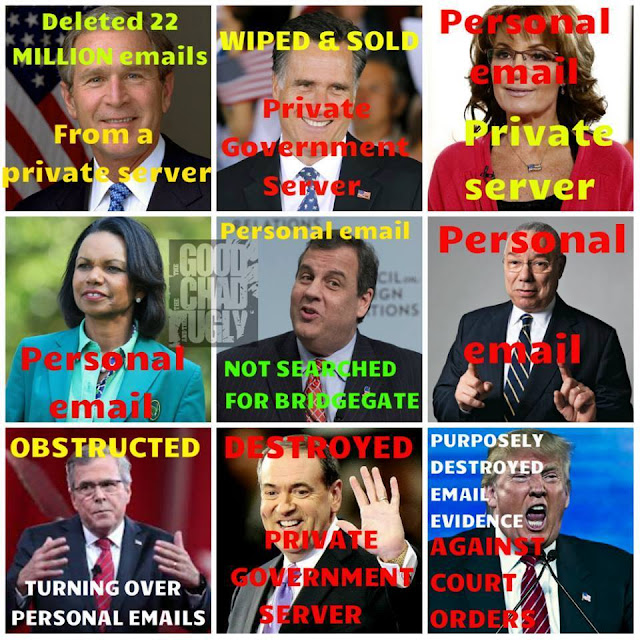 One wonders what could spur a homegrown attack, since, when Bush Jr.'s popularity sank below 50%, he got a resounding comeback at 90% after the 9/11 Terrorist attacks.  (And then squandered that away in the Iraq War)  A lot of people worldwide were visibly upset at the 2016 Election results (myself included), seeing it as a 11/9 disaster.  But the outpouring of protesters fighting for women and their lives has given renewed life to Democracy-lovers who would've been otherwise complacent with a Hillary win.  It's reassuring that when their way of life is threatened, the people aren't simply willing to take it lying down in the face of overwhelming ineptitude.  But that may mean nothing if in the midst of a Trumpian temper tantrum, he winds up outlashing at everybody around him in a vain attempt to strike back.

On the plus side, Trump is doing every single instance on how NOT to run the White House. Too bad he has to use it as an actual Real-time experience, and not a thought experiment.  This is the world's worst Reality TV program currently airing.  And yet, I daren't look away, because I'm terrified of the consequences if I don't pay attention.  In any other parallel reality, it'd be an amusing diversion.  While there were numerous YA dystopian novels, I often lamented that these authors weren't able to accurately convey the overwhelming sensation of being caught under a totalitarian Government constantly hovering over their every action, like those who actually experienced such states.  It was NOT a request to make one a reality.

Also, it's somewhat of a shame that Trump is meeting Justin Trudeau tomorrow, and not Jean Chretien.  Could you just imagine a conversation between an amusing master pithy orator (A proof is a proof, Balls like this... or THIS?) with Mr. Word Salad himself???  Chretien's speech would run circles around Trump's attempts to intimidate to the point he wouldn't know whether he was coming or going.


"Why keep a semi-auto rifle or nuclear weapon at home? It's dangerous - a child could find it and play with it." - Jean Chretien on gun control; outside the House of Commons, 1998

In some instances, there's There's a certain similarity in their mode of speech.


"To be frank, politics is about wanting power, getting it, exercising it, and keeping it."

"The art of politics is learning to walk with your back to the wall, your elbows high, and a smile on your face. It's a survival game played under the glare of lights."

"A successful politician must not only be able to read the mood of the public, he must have the skill to get the public on his side. The public is moved by mood more than logic, by instinct more than reason, and that is something that every politician must make use of or guard against."

The difference being, Chretien could make his word salads work.  In particular, these phrases must've come as anathema to Trump:

"To my mind losing is always better than never trying, because you can never tell what may happen."

"Economics has been called the dismal science. Once you get to understand it, you may not find it so dismal, but you don't find it much of a science either."

"It is not the government's purpose to make a profit the way a company does, because a company doesn't have to give a damn about the unemployed poor or provide services that are non-commercial by definition."
Posted by DeBT at 8:24 PM