Just in case you're unfamiliar with the term, Gaslighting is when someone plays up the guilt card by implying and inferring that what you're said was invalid, playing your thoughts against yourself.  Unless there's verifiable recorded proof saying otherwise, you're caught in a game of "I said, You said".  Expert passive-aggressive assault consists of constantly harping over your words, trying to redefine what you've said in painstaking minutiae essay-length detail that causes your innocuous remark to die in the process.

The rise of the Alt-Right online, spreading their rhetoric of hatred has had large implications not just in America, but also across waters with the dissolution of the E.U.  A bunch of rowdy politicians who wanted to implement their narrow visions upon the world, only to succeed beyond their wildest dreams.  But winning through the narrowest of defined victories had extravagant costs that they're just beginning to find out. They never intended to win in the first place, let alone grant all the promises they made in order to gain popularity and eyes their direction.  Now that they're forced to live with the decisions of the (stupid) mass majorities, they're faced with the unenviable choice to either follow-through on their impossible demands, or boldly forge ahead, and risk being lampooned for generations to come.  Backpedaling on reneging their promises would make them look weak otherwise, and they wouldn't want to risk admitting they had no plans beyond winning. 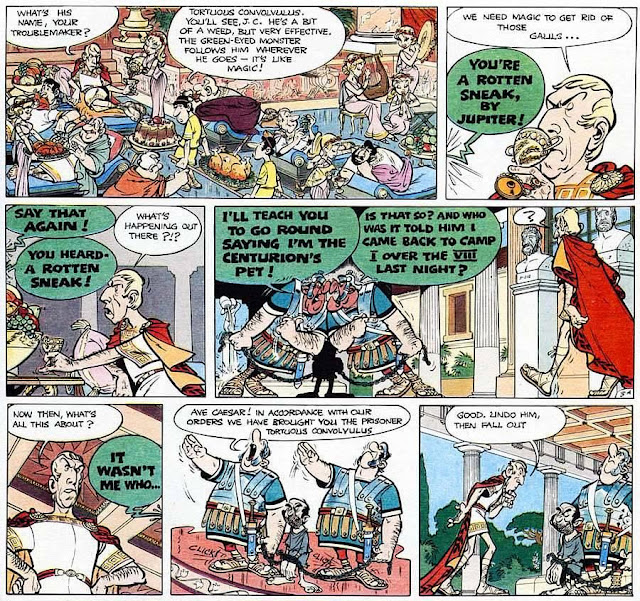 At a time where truth and fiction are considered interchangeable, and the news that's considered more favorable is constantly being won out due to personal preferences, an adaptation of Asterix and the Roman Agent seems more appropriate than ever before.  But only if done by the same team of Alexandre Astier and Louis Clichy, faithfully capturing the spirit of the books with Mansions of the Gods.  (Which I greatly recommend, despite reservations over some wonky translation issues) 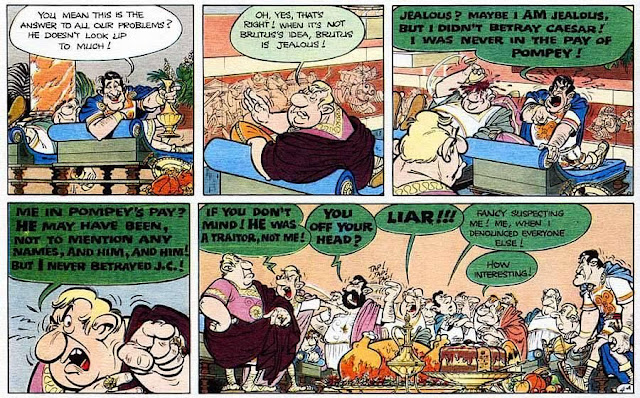 The scene-stealer is Tortuous Convolvulus, whose mere presence causes everybody in his vicinity to lose their collective minds, even when they're aware of his ability or not.  Long-overheld grievances are suddenly brought out into the open, hostilities arise, and infighting becomes rampant.  It only takes the slightest nudging in a general direction to further flame the fans of war beyond their reasonable limits. 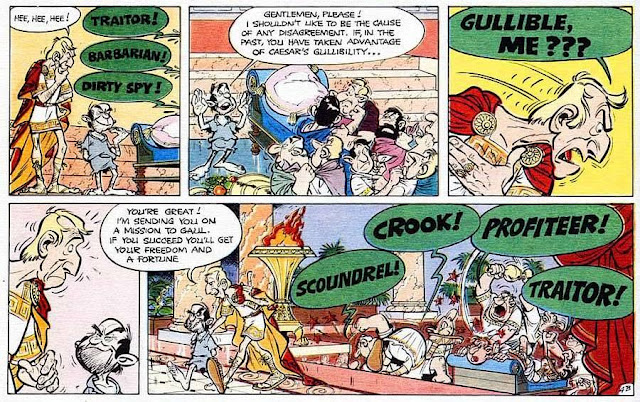 Not too shabby for a smug midget who has the facial features reminiscent of The Grinch. 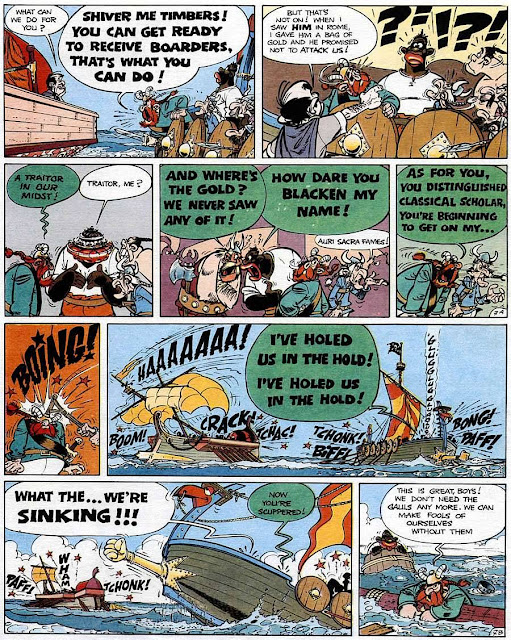 Of course, when adapting a story from one medium to another, certain liberties would have to be taken.  We'd lose the visual impact of the infected parties speaking in Green-hued balloons, but that could be easily conveyed through having the speaker's eyes glow a persistent bright green instead.  What counts is successfully implementing various concepts from others that wouldn't normally fit in a singular story.

In the past, they meshed two divergent Asterix books, The Big Fight and The Soothsayer to create Un Coup de Menhir (Operation Getafix), and Asterix the Legionary and Asterix the Gladiator into Asterix Versus Caesar, neither of which was as great as they could've been.  The two (unadapted) Asterix books closest in theme of money, Obelix & Co. and Asterix & the Cauldron are wildly different in story structure.  One is a broad satire of Capitalism, the other a monetary journey fraught with failure.  (Asterix is skillfully adept at maneuvering people, but he's an awful businessman, since he doesn't understand finance)  For Mansions of the Gods, they used the Senator from Asterix in Belgium, and the catapult from Caesar's Gift.  By picking and choosing selective elements into a cohesive whole.
By the same token, there's certain potential elements that could be gleamed from other books that would be considered unadaptable, yet be additive enough to the overall theme than they'd be on their own.  Keep in mind that these are merely suggestions for a theoretical project that as far as I know, hasn't even begun production yet. 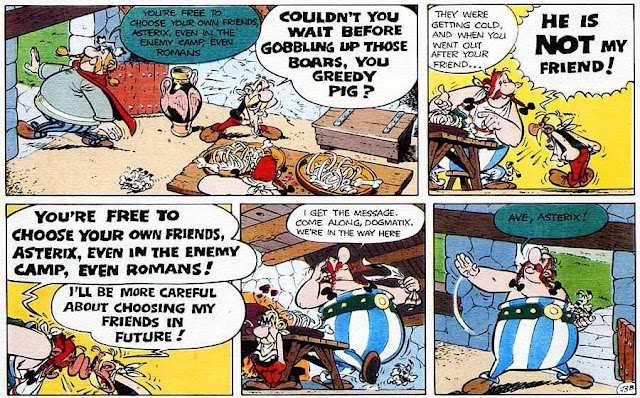 For starters, the constant arguments between Asterix and Obelix where they fight like an old married couple would suddenly have stronger consequences and meaning in this story than their squabbles would have elsewhere.  This instance here shows how pervasive Convolvulus' influence is, causing fractures to appear even between the closest of friends.
And then, shortly after Obelix angrily marches off in a huff, his conviction fades away, wondering just what he was so upset about in the first place.  There have been multiple instances of the two breaking up, sulking, and making up within a very short time frame.  But I don't think they've ever been captured in a meaningful context. 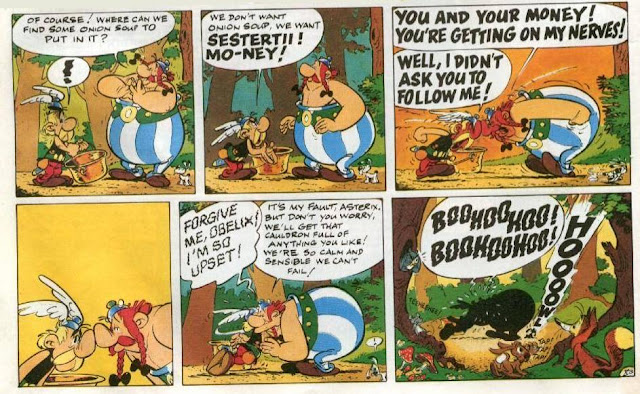 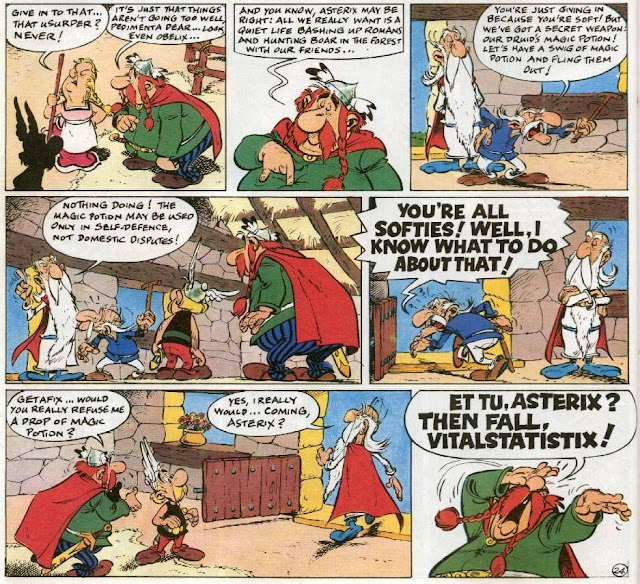 One final element would be the portrayal of a mock trial heavily biased towards Asterix for having suspicious relations with a Foreign power who's on friendly terms, despite his constant denials. 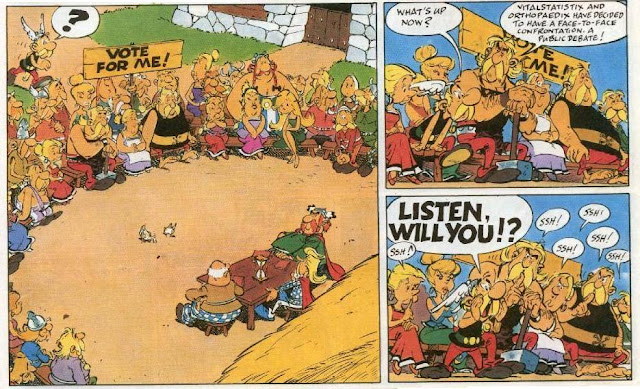 You can just see Asterix fending off the Council's baseless claims with an almost bored expression, being slightly insulted at being probed in this manner, much like Clinton's constant investigations on Benghazi.  I also wouldn't mind seeing more scenes of Asterix trading verbal barbs against the Roman Agent, since Convolvulus is the closest thing he has to a mental heavyweight. 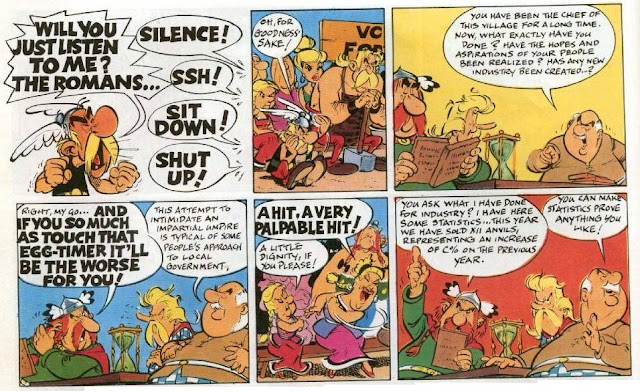 One last thing to consider is the consequences of trolling your base.  When you expound easily disproved facts over and over, the followers behind the instigators start to believe their own lies. 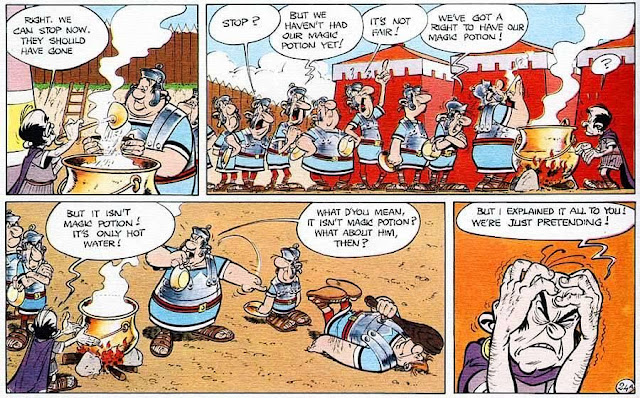 Once they've succeeded in accomplishing their aims, their only recourse is to eat their own.  The worst way to quash someone's dreams, ironically enough, is to grant every one of their wishes.  These newfound lofty positions turn out to be the poisoned chalices, the inevitable result of having every perceived obstacle casually cast aside.  When your entire modus operandi is built on conflict, and there's no more resistance, falling back on peaceful norms is practically improbable. 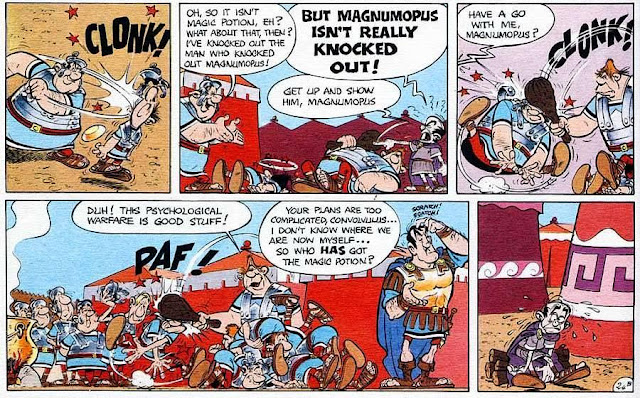 A possible conflict of interest in copyright infringement would be in capturing the portrayal of the General in charge.  You'd never convince a modern-day reader that the Roman General above, Felix Platypus is a caricature of French actor, Lino Ventura, and not Sylvester Stallone.  But that could be easily overcome by simply reusing General Somniferus from Mansions of the Gods.  As I've said, just throwing these ideas out there. 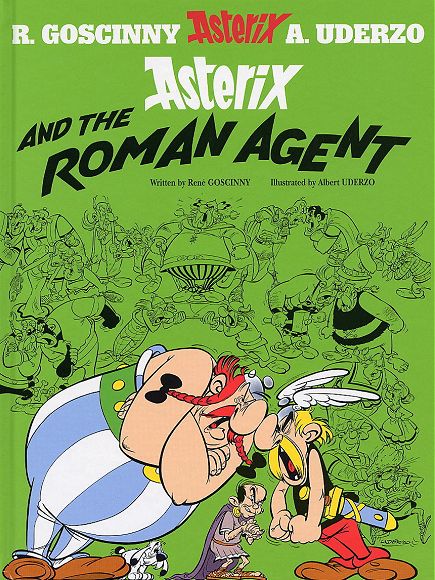