Long Walk to Valhalla: Paying Respect for the Dead

A recent feature that's recently appeared on Comics Alliance, Strip Panel Naked, which analyzes the layout of quality comic pages, and what makes them work.  Since I've done plenty of posts complaining about comics that make silly avoidable mistakes, I thought it'd be a nice change of pace to pointing out what aspects of comics I actually like.  As amusing and informative as it is to focus on the negative, it doesn't mean much if I don't give equal attention to certain fields where comic excel in their craft. 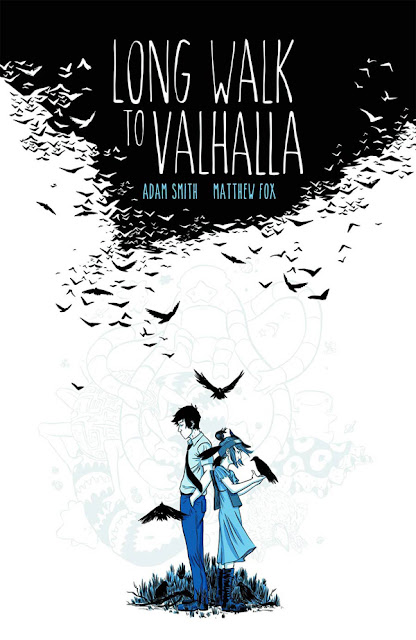 Long Walk to Valhalla, written by Adam Smith and drawn by Matthew Fox is a visual tour de force.  It'd be difficult to summarize the book in concise sentence or two, but I'll try.  The story focuses on Rory, a man on his way to a city who, after his car breaks down in the middle of nowhere (rural farmland), encounters a Maniac Pixie Girl who believes herself to be a Valkyrie, and that the man needs help for safe passage for getting gas, since she thinks he's going to die soon.  Along the way, there are sporadic flashbacks to Rory's childhood, involving his alcoholic Father, an absent runaway Mother and his Mute Brother who has visions of impossible creatures that may or may not exist.  (Just smile and nod like you understand)

For the most part, comics are basically puzzles that need to be figured out.  Dialogue and events are put together, and it's up to the reader to make sense out of them.  The more intuitive a comic is, the easier it becomes to read by just looking at the pictures alone.  What I particularly enjoy are comics that don't go out of their way to make their statements overly obvious through having everybody state their innermost thoughts outright, since not everybody can make grandiose speeches at the drop of a hat.  (For a long time, I had trouble starting dialogues, because I felt that everything I said needed to be profound)  My recapping of these pages may be redundant, but it'd be handy for the less visually literate crowd out there. 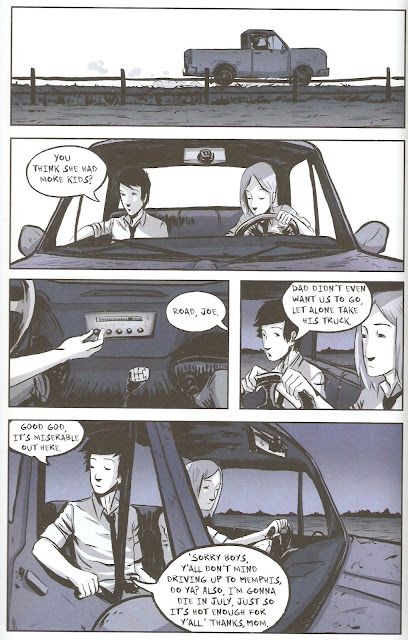 The flashback scene sets out on a time in Rory's teenage life when he and his brother were making a trip to see their Mother who ran off years ago.  Along the way, Rory passes the time making snide sarcastic remarks of imitating his father who was reluctant to lend out his truck to go to a procession in the first place. 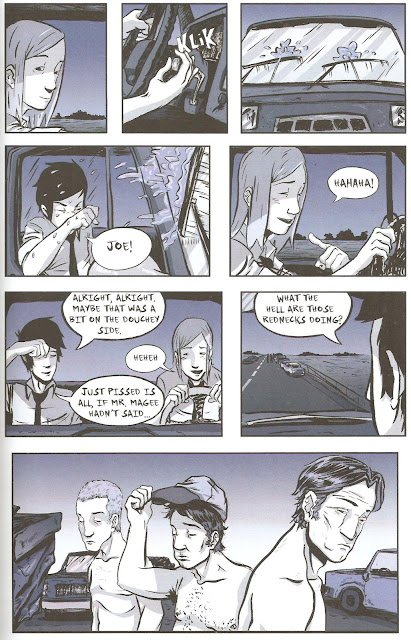 As way of teasing payback, his Mute Brother turns on the windshield wipers, splashing some water all over him through the open window.  It's taken in as good humour though.  Despite his handicap of not verbalizing anything, Joe manages to get his point across with minimal verbal and visual cues.  Also, the lack of anger at Joe's mischief suggests that the two of them get along well together with little animosity between the two of them.  Then Rory notices something showing up on the road ahead. 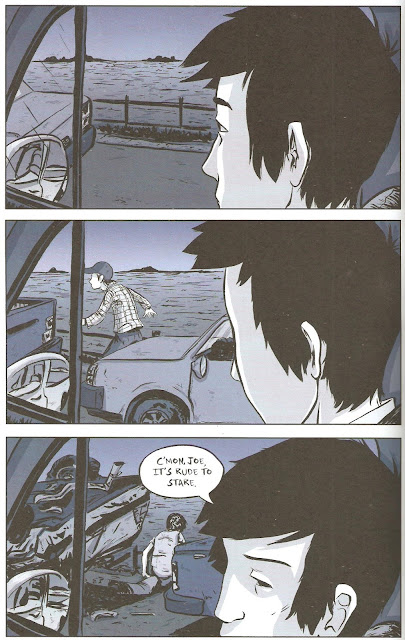 Drawing closer, the two of them come across a sight that'd be better left averted, and Rory tells his brother not to look. 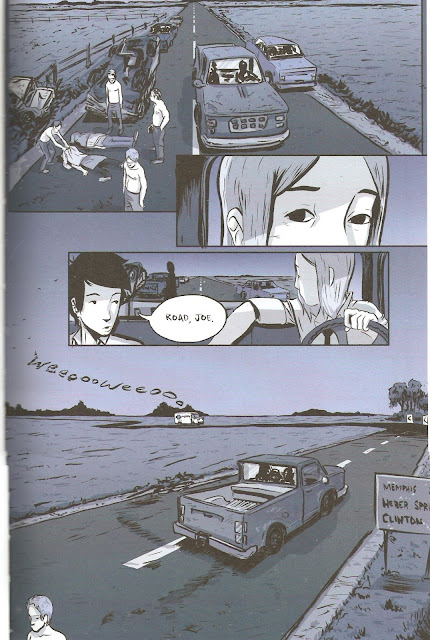 Leaving the scene, Rory reminds his brother to pay attention to the road, echoing his words of caution earlier.  In the distance, an Ambulance whines its siren, whose arrival is mostly redundant at this point. 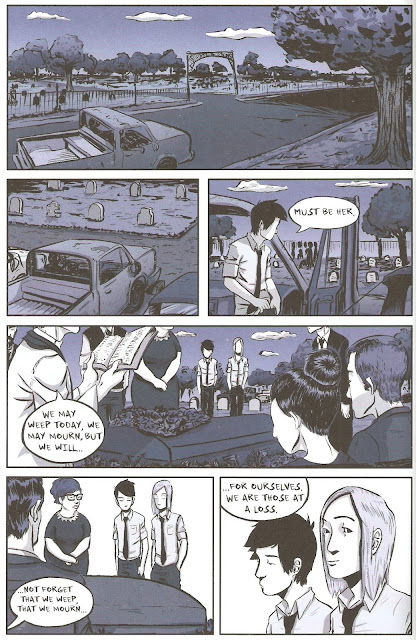 Having arrived at their destination, Rory notices a crowd gathering, and figures that must be where they're expected.  Rory gives an impassioned expression while Joe gives a friendly smile to the crowd full of faces that he's never seen before in his life, as the Priest exposes of a life well lived. 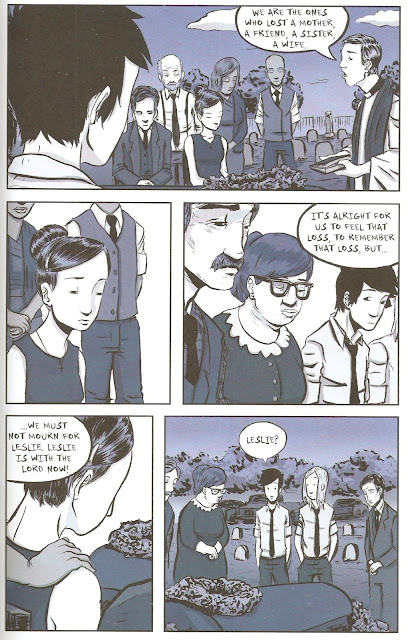 At the mention of the dead woman's name, everybody looks up at the two new arrivals.  Even though his mute brother hardly says a word, his expressions and actions speaks volumes. 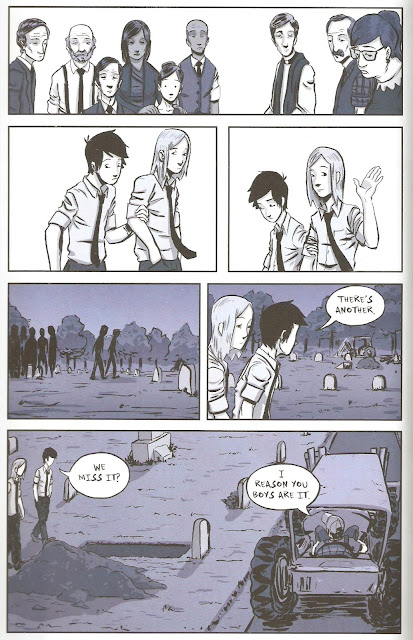 Having come to the correct grave this time, worried that they just missed the service, the only people in their Mother's life who bothered to show up don't do much more than offer flowers and stand in silence. 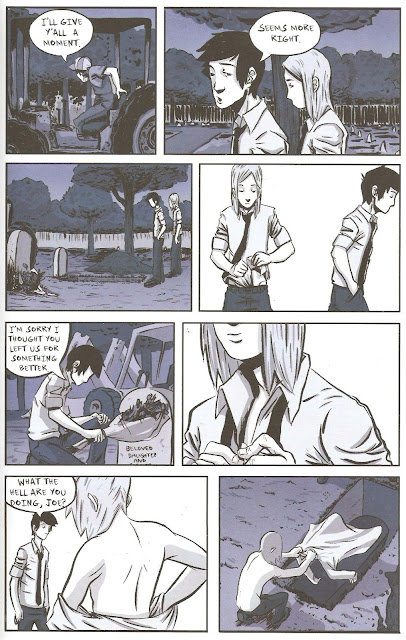 For Joe, being quiet is his default state, so pays tribute the only way he knows how - by example. 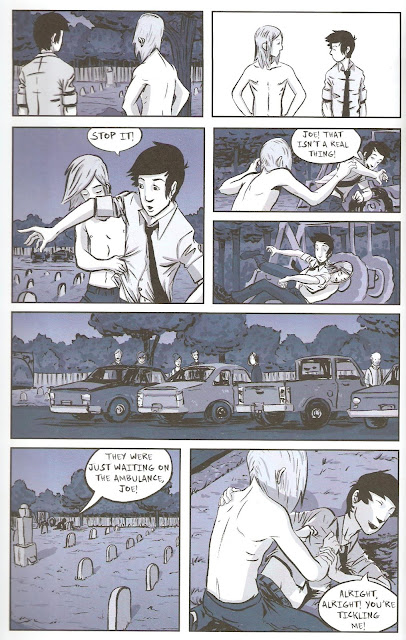 Joe's curious actions begin to attract the attention of the funeral crowd who they'd interrupted earlier.  Rory gives the closest explanation to what his brother's doing, trying to take his clothes off in a secluded section of the world that normally doesn't have much activity. 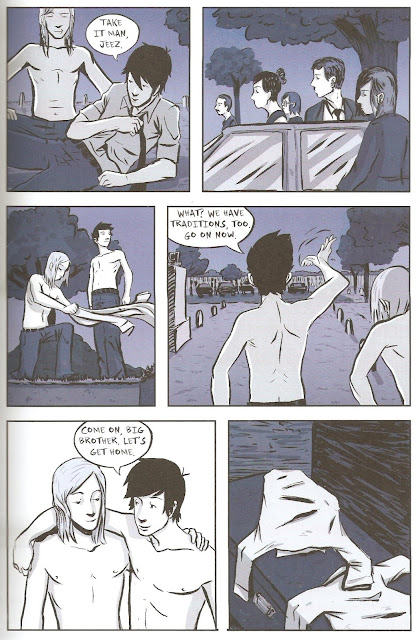 Some people lay stones on cemetery headstones.  Some people light incense.  Some people throw dirt in the grave.  And some people cover the dead with the clothes off their backs.
Posted by DeBT at 8:42 PM