Deep in the Heart of Hartland

When I first did my annual Famine comic tribute, I came across a comic that was a clear rip-off (i.e. influence) of Bloom County.  That comic was Hartland by Rich Torrey, who's now found better success through a line of modest children's books.

For weeks, I attempted and completed the dubious accomplishment of saving every single Hartland comic from June 17th, 1985 to March 1st, 1986.  And I can safely say without reservation that it is one of the WORST comic strips ever made.

Having accomplished the masochistic task of poring through every available comic, struggling to reach my goal, I was able to compile a comprehensive microcosm of the comic, though I might as well have gleamed the same results just from a month's worth of material alone.

The cast, other than Dave Hart (the boy) consists of:

The Father, Ted Hart, a bitter man who has hostile reactions to any mention of his ex-wife, and constantly makes disparaging remarks about his son's weight.

The Mother, Sallie Hart, also a divorcee, who constantly cries out for attention, but is usually passed over in favor of the Father's POV.

Seech, Dave's best friend.  He's not mentioned in the cast list, but he's the resident weirdo, and consequently, the only child Dave's age who bothers to talk to him.

Mrs. Blister, the Babysitter, is actually the wild card in the bunch, and makes Seech look normal.  One thing to keep in mind while finding these comics was that I cleaned up a lot of the newspaper residue, including the flecks of dust and smudges, represented by various "dots" on the page.  (Though Hart looks better without the Freckles on his face)

Lastly, there's Dr. Joystick, who's supposed to be a Family Counselor, but probably got his qualifications from the Lucy Van Pelt school of Psychiatry.

Part of the problem stems from Torrey suffering from writer's block, being intimidated at the legacy of Charles Schultz's Peanuts (which was only 35 years at the time), and trying to figure out what to write that would leave a lasting impression.

It's just too bad that so much of what he penned down was so unimaginatively uncreative.  Most of the material was shamelessly pilfered and done better by more competent cartoonists who knew what they were doing.  The 2nd comic from the top?  Lifted from the 1st Doonesbury.  The kids talking philosophically on stone walls?  Lifted from Peanuts.  Even Berkley Breathed's early College strip, Academia Waltz, had some elements of broad humour that would later become the basis of classic Bloom County comics. 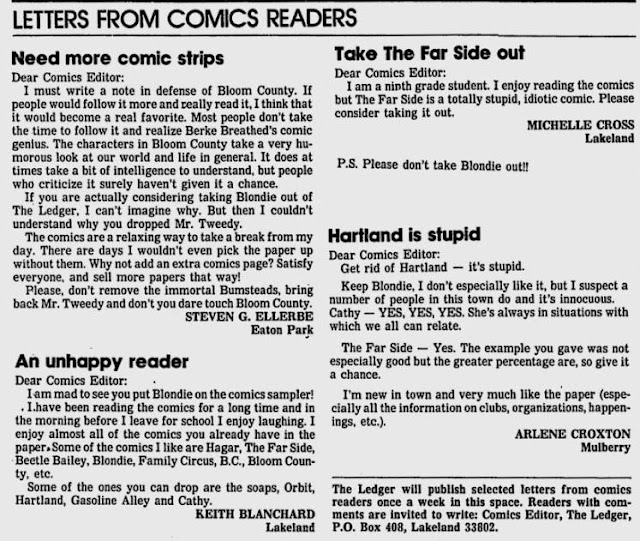 Eventually, readers began to loath seeing Hartman on the pages: Another problem is that there's practically no daily progress.  Everybody's stuck in their same rut, and there's hardly any consecutive storylines, rendering much of its material utterly forgettable.  Hartland is what would've happened if Breathed had just stuck to the cast of elderly people in his first year who would've been phased over for their more interesting complementaries.  (Of all of them, only Steve Dallas and Milo Bloom would remain, with Rabies the Dog becoming the Basselope in spirit)  If there IS one thing that Hartland did that no other comic did, it was have a boy who expressed concerns over body issues.  This topic would be more relevant today, even though it's a subject more likely aimed at women.

It's just a shame that Dave manages to undermine that by being so much of an emotional whiner.  It doesn't help that on the occasions where he's not talking, he's staring at whoever's talking with a dazed open-mouthed expression.  And so much of his childhood nervousness feels artificial and tacked-on.  And this is damning with faint praise.