The Bad Kind of Hurt

For the last three weeks, I've been suffering an annoying bout of neck pain combined with a migraine, neither of which seemed to go away.  Normally, I bury myself with work to ignore such trivial annoyances and focus on other duties, but it turned out the mass amount of material I needed to work with was what was causing the pain in the first place.

My irritation started when after having completed the first part of a lengthy project, found out that there were other steps that needed to be added... and the papers needed weren't ready yet.  I like to assemble my files in a routine assembly line manner, and the constant factor of having to open and close literally hundreds of folders all the time was not a feasible design in my mind.  I attempted to leave these folders open, but they wound up taking up more room than expected.  Sure, it was inconvenient, but to me, the prospect of having to reopen folders with potentially sensitive material that could slide around anytime seemed more important to me.  These folders weren't designed to be opened and closed so many times.  Then, on one particularly stressful moment around the photocopier, I had a minor meltdown, and was told to leave early.  Even though my outburst gave me some well-needed cooling downtime, I still felt inconvenienced that I couldn't help out as much as I could.

Even after the job was finally finished a week later, the pain still lingered.

The sense of pain surrounding my body has always been a little weird.  When one part of my body hurts, it usually stays that way for a few days, until it fades away.  ...at which point, another part of my body which seemed perfectly fine before starts hurting again.  For instance, my knee might start hurting for a few days, before the pain transfers to my elbow.

While looking up my symptoms in a medical handbook, and looking at the boolean logic ladder, I was wondering whether any of the potential causes were from a ruptured muscle, or a slipped disc.  Since I was still able to walk and move my head, it seemed safe that neither of these options were plausible, and it was most likely the result of a pulled muscle.

I pointed out that the cause could've very likely been from when I accidentally fell out of a bus.  It was something that just happened last year, when the bus I was riding was taking a detour the other way it was supposed to go.  At a stop, I leaned out the door, holding the handlebar to look at the digits on the side to see if I'd gotten on the right one, since I couldn't see the number from the inside.  The driver, not knowing my intention, and figuring that I was getting off, pulled away from the curb, just as I was trying to hold onto the closing door I was gripping.  I landed on my back, my backpack cushioning the brunt of the blow (and ruining a pill capsule I was keeping spice in), but my head still slammed against the pavement, knocking my neck back.  The driver and passengers checked to see if I was alright.  Physically, I was fine, and managed to get back to my seat, but while resting my head against the wall, the vibrations made it difficult for me to relax, because I was still in shock, and starting to feel the effects of the fall on my neck.  That occurred to me when I was riding the bus lately, and noticed I couldn't relax as usual.

Equally annoying was my inability to sleep properly.  Having a hurting neck doesn't work wonders on a pillow, if the pillow you're sleeping on has been deflated to the point of limpness.  Much later, I was given a replacement pillow, but not a Dakimakura Anime pillow.  (While I like having a pillow pressed up against my stomach while sleeping, I consider those things to be rather worthless, since you can't see what's on them in the dark)  Turns out the new pillow needed some time to contort itself to my shape, and I was more comfortable with my old pillow. 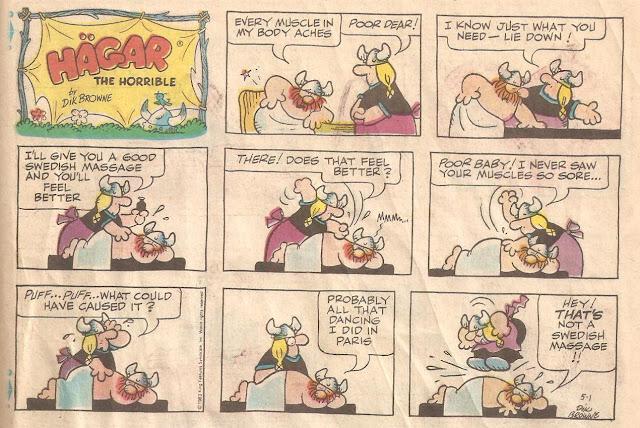 But this lack of sleep was further exacerbated by a Reoccurring Dream I kept having.  No matter what I did, I kept coming back to the same scenario:  a young girl left in the Upper left corner of a park.  No matter what I did, I couldn't get rid of it, no matter how hard I tried.  I kept worrying that this was some kind of prophetic subliminal message .  Otherwise, why harp on the same scenario multiple times, when it has no meaning for me?  The dream only changed slightly when I shifted sleeping positions.  I was now leaving the park from a slightly different angle.  While the surroundings were annoyingly similar, there was a subtle difference - the girl mentioned that the area was beautiful, and never wanted to leave.  Upon waking, I wondered if that was the reason.  That is, my subconscious refused to let me go until I worked out an answer.  It must've been, because I haven't had that dream since.

One day, the pain got so bad that I couldn't even stay long enough to help out as much as I could.  Dealing with one localized pain was bad enough, and could be dealt with, but two from opposing different sides was another story.  I took muscle relaxants and aspirin to help ease the pain, but neither seemed to work.  I looked my symptoms up online, and found there was a rare symptom where a neck pain could be the indirect cause of my headache.  Finally desperate, I went out and got some medication specifically designed to deal with tense neck muscles.  Those worked better than the other brand, and seemed to work. 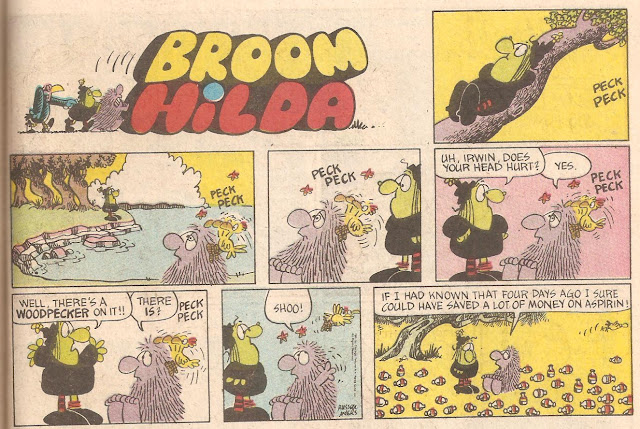 And yet, even with the new medication and applying cold compresses, my neck still hurt.  My parents were starting to become concerned.  My mother suggested a massage therapist she'd gone to recently, who had "magic hands" that made one of her persistent pains in her back go away after just two sessions.  Now, my mother is somewhat sensitive, having particularly fragile bones, and yet she still routinely goes out to play tennis, even though it causes her tennis elbow, along with tennis ribs, legs, spine, wrist, and any other body parts that require sports function.  When she gets injured, she always gets cranky on account of not being able to move, so I have to hope for a speedy recovery, so things will become peaceful around here. 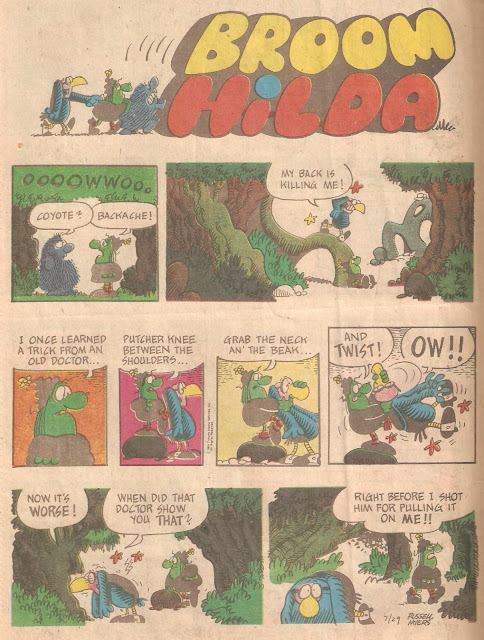 I'm normally apprehensive about letting others touch my body, since I'm rather sensitive and ticklish, but given my mother's high referral and my desperation, I was willing to give him a chance.  Especially since the right side of my neck didn't hurt much - but by now, my left side was starting to feel sore. 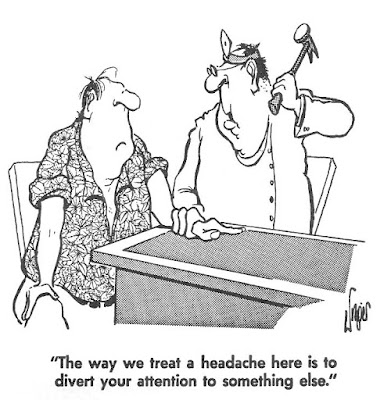 A week later, my headache had subsided somewhat, though it had turned into a variation of the white elephant effect - it only hurt if I thought about it.  By then, I was in the waiting room of the legendary masseur, waiting for my turn to come up.  An appointment was made back when it seemed my neck was on the wane.  If it'd gotten any better, I could always cancel, no problem; but if it worsened, he'd have a slot to fit me in.

I was filled with apprehension about what I would be going through, since my general knowledge of massage pallors was limited to what I read in comics and seen on TV, most of it with negative connotations.  But then, humour plays off of things that go wrong, than on what goes right.

I figured that chances were that I'd be flat on my stomach for most of the session, being bored out of my skull, so I'd brought a book with me so I'd have something to occupy my time.  Most people would fill their time with music or books on tape, but since neither are obvious choices for me, I'm left with less options.

However, it turned out that there was much more internal movement involved than I thought.  First, I was told to sit on the table, while my back was prodded using various pressure points.  Then, I was laid on my back while he poked the underside of my back while pressing alongside my ribs.  Other times, he would be pressing the underside of my back, while moving my arm around.  Then I sat up again.  He would be testing both sides of my body, feeling around for what areas needed attention.  Throughout the session, I was rather ticklish, because some of the points he pressed were rather sensitive.  I'm rather touchy about being touched.

Throughout the procedure, the masseur talked about various things, most of which I missed since he was facing away from me.  Obviously, this was related to how barbers tend to ramble on random stuff while cutting hair, and since he hadn't had a Deaf client before, he didn't know how to talk appropriately to me.  I had to have what he said repeated back by my mother who was in the room.  One of the subjects that came up was that he knew someone who had a baby, and their parents were communicating via sign language.
Now, this kid wasn't born deaf, but overcoming the hurdles of lack of speech communication was no small task.  They figured they might as well get started via visible finger movements.

My mother remarked that the signing baby was much more proficient in learning sign language than me, since I never expressed much interest in it, beyond the basic alphabet, numbering and easily identifiable movements.  I responded with, "Well, that goes without saying."  Then, I repeated back what I just said slowly, like when Witch Hazel realizes she's just made an unintentional pun.  "Goes.  Without.  Saying."  I have a knack for coming up with appropriate stealth puns that aren't cringeworthy in the heat of the moment.

When he was finished, the masseur had reduced the pain down to two spots on either side of my neck.  They still lingered, but at least I had a specific point I could localize, rather than a scattershot broad area. And yet, even with this expert manipulation over my upper body, I still wound up hurting days later.  I was starting to lose sensation in my arm. 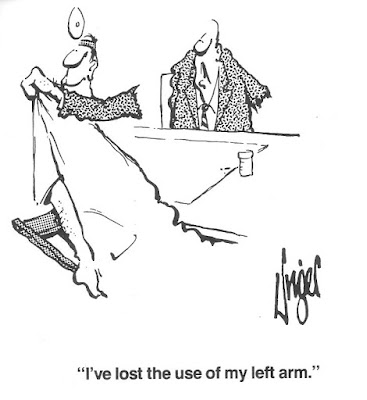 It was pointed out that a potential likely source of my pain could've been from sitting at the computer for long hours at a time.  Of this, I'm unashamedly guilty.  However, the cause could've very well been the unfortunate positioning of my keyboard.  Previously, I'd had my keyboard facing away from me, so I could rest my arms on the table.  But because I kept notes that I meant to write down later, I put those in front of my monitor, putting my keyboard closer to my chest, where I'd write via my armrests instead.  This new position meant that instead of writing straight ahead, I was now writing at an unnatural angle, which could very well accounted for my neck problem, because I was twisting my body around instead of facing forward. 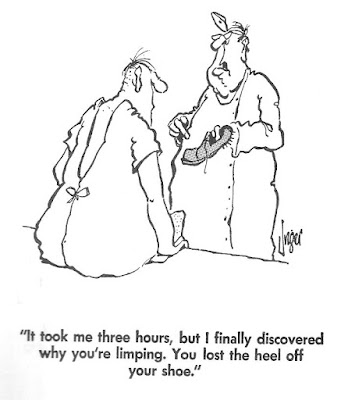