A year ago, I documented Johnny Hart's last burst of creativity detailing a sporadic story that went on for the better part of a year.  I figure it's time to show the remainder of relevant strips that was done since then. 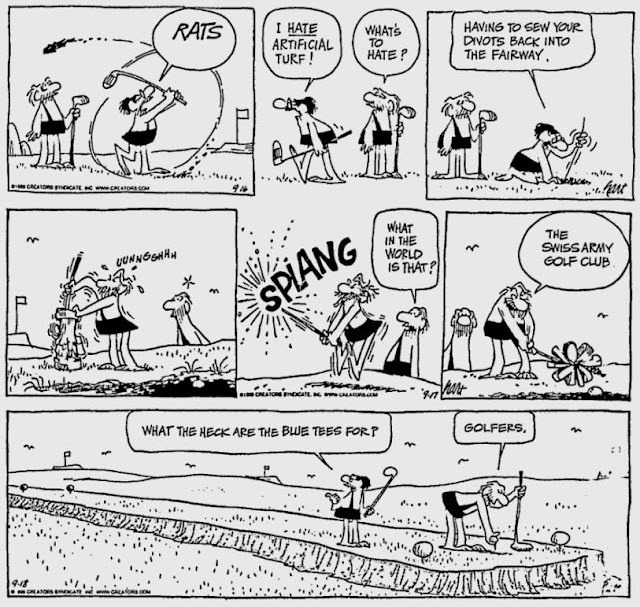 For the most part, the general makup of typical strips was left unchanged.  There was just one minor difference - in the middle comic above, Peter still sported the lengthy beard he'd accumulated over his journey.

You might've vaguely remembered that while the bulk of the gang went to see Peter's return to familiar homeland soil, two of the regular cast stayed behind.

In the meantime, we focused more on Peter's facial hair.

...until Johnny Hard apparently had enough, and decided to revert him back to his old ways.

Then, they noticed that one of their regulars wasn't around anymore...

In keeping up with regular changes, Grog, once monosyllabic, had suddenly become more profound and prosaic.

Eventually, attention turned back to the missing duo in company of the new arrivals.

In all likelihood, they weren't much of a meshable pair.  They never quite seemed to fit in with the main cast, being too radical and inside jokey to fully appreciate.  Johnny Hart must've eventually gotten wise to his limitations, otherwise he wouldn't have fallen back on more reliable norms.

Even the swath of animals in Peter's motley crew was mostly forgotten.

Curls eventually went back without much fanfare, but the Fat Broad took more time, and was acknowledgely missed.

You're not missing anything between the above two comics - the October 16th strips was on a Saturday, and October 18th on a Monday.

Oh, and don't think that any of the Sunday comics would've filled in any potential plot holes, because they didn't.

This strip would be the last reference to the grand adventure that'd taken place, with a celebrity football namedrop so obscure you'd need to look it up for it to make sense.

Incidentally, it would also be redrawn for a religious-themed Easter comic years later.  With Peter and BC switching roles.

In terms of animal familiars, this would be the last appearance of Herman Crab... who wouldn't be fondly remembered until two years later.

Normally, this would've been the end of all this nonsense, and I could close out with a rather dark backstory about the Guru who oversees all...

...but Anno and Conahonty would make a rare appearance on January 21st, 2002, three years since their first appearance.

After all that build-up, you'd expect there to be more of a continuing storyline, but that's where it apparently ends.
Posted by DeBT at 11:19 PM