Handing over the Reigns


When it comes to legacy strips, there's the ever-present demand to keep a popular strip running, no matter how much the fumes are threatening to overwhelm the cartoonist's family.  When a family member dies, it's usually up to the children to decide if they want to continue their passport to safe & steady income.  Only in rare cases where a cartoonist explicitly outright says they don't want their feature continued after their death (such as Charles Schultz), fearing that their vision alone would be unique and any further attempts at emulating it would be inadequate and fail to match up.

When that happens, there's generally a transitionary period between the old cartoonist and the new one.  The trick is to make the process look as seamless as possible, which can sometimes be considered tricky if there's not enough warning beforehand.  Such as if said cartoonist dies suddenly, like Jeff MacNelly.

This was the last Sunday strip that appeared on August 13th, 2000, and it was... a Mother-in-Law joke.  Hardly a thigh-slapper.  The next Sunday strip was done by the team of his assistants and wife, whose credits can hardly be seen in this (only) sample I could find.

I like to think that the comics that appeared before and after a creative team switches out has some kind of hidden commentary behind it.  Or maybe I'm projecting issues where there's none to be found.

This was the last Shoe daily strip that ran on October 21st 2000, which hardly seems like a fitting end to a man's legacy.

Because of the scheduling conflict between showing comics, there was a great gap between the last Sunday strip and the last daily strips.  Which meant that for papers that still allowed Shoe to run, instead of replacing it with another comic, many never got to see MacNelly's remaining comics.  Which is probably just as well, considering the episodic nature of the strips and lack of continuing storylines (Boot Camps and political commentary notwithstanding) the vast majority of Shoe is middling fare.

Another common unspoken complaint is when the character design look decidedly off compared to how they looked before.  The artwork for Hi & Lois and The Wizard of Id have gotten worse in later years.

Strangely enough, this slightly off-model look for Hagar appeared later in Chris Browne's run, after he'd spent considerable time following up in his father's footsteps.  In March 24, 1990, Dik Browne penned his last Daily and Sunday co-concurrently within a day of each other.

I like to think these strips were subtle commentary on how Dik Browne could no longer keep up his regular pace of work.

And then Chris Browne showed his strip, which while indistinguishable from the original, seems to have some pointed commentary, while also sounding fairly typical of a regular Hagar comic:

Strangely enough, while you can clearly see Chis' signature in the last panel, credit is still given to his father in the title panel.  I suppose there must be some power in name recognition, even after retirement. 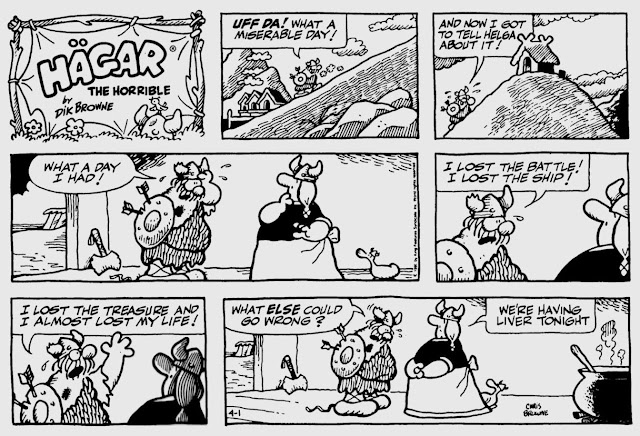 Of course, the samples I've chosen seem more logical, compared to the alternative.

The Browne signature is barely legible on March 31st, and only next week Monday, is Chris' name added.  For a new comic, it's not that remarkable.

If an artist is skilled enough, the change can sometimes be so microscopic that it can't be told apart despite rigorous observation.  And that's even after being told there are minute differences.  But sometimes, there are small but subtle ways to tell them apart.  The art style may remain the same, but the mentality behind the art is very different. 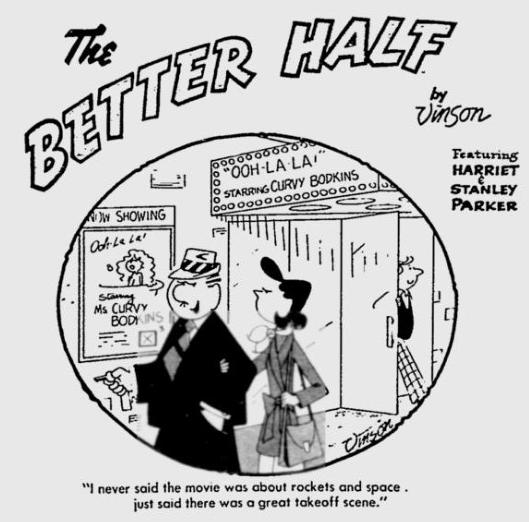 For a rather tame comic about barbed (but never overbearing) remarks aimed at the other spouse, The Better Half had some surprising saucier elements  during it's Vinson run.  Stanley could be quite smitten with the ladies who weren't his wife. 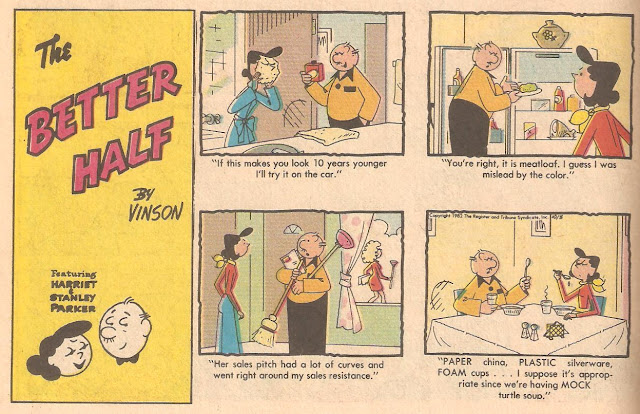 Then Harris took over, and there was a slight but subtle change in Stanley's demanour.  He was still a fat foolish husband, but no longer conspired to cajole among the ladies.  Furthermore, any jokes regarding his boss and Mother-in-Law dried up and disappeared. 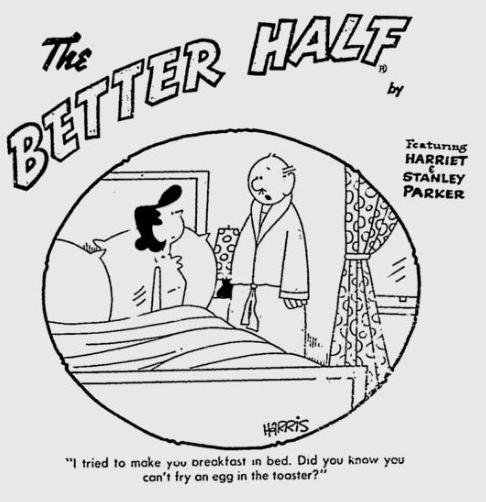 Of course, that's only my interpretation from the Sunday comics, but I don't have the time or temperance to go through the daily strips myself.  These character designs wouldn't remain attached to this for long, and become more cartoonier in later iterations.  The Better Half has gone through many permutations throughout the years as its shifted artists, finally ending up retired by Randy Glasbergen in the end. 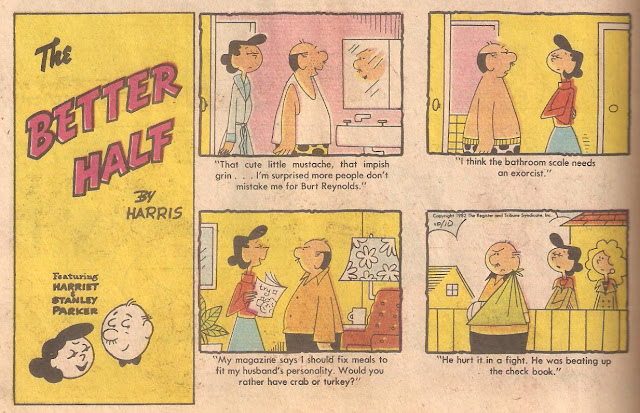 Of course, that's just a minor change gone unnoticed throughout the years.  When another artist takes over where one left off, and their styles aren't consistent, the results can be jarring.  The last week of Brian Basset's Adam (later renamed Adam@Home) from February 16-22, 2009 was a series of lazy widescreen comics that could've been done in his sleep.  (And probably was)

The very next strip that showed up next week was radically different:

Rob Harrell had none of Brian Basset's scratchy artwork, and opted instead for checkmark
that was just a poorly rendered rendition of Adam's mouth being portrayed at the time. 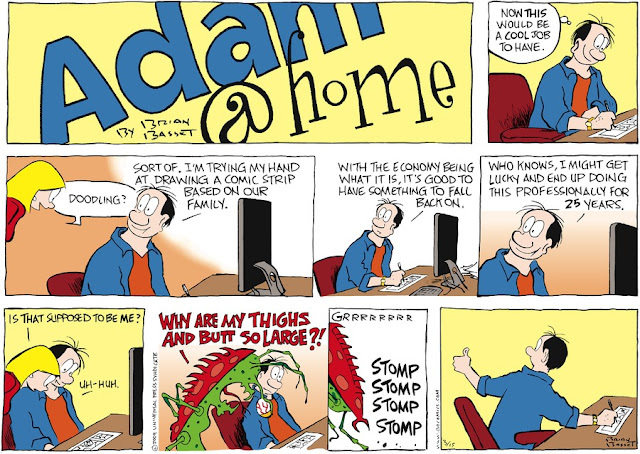 Adam's last Sunday strip on March 15th was his last chance to go all out in self-aware commentary over what he'd been doing.  Rob Harrell's artwork and dialogue seem less inspired in comparison. 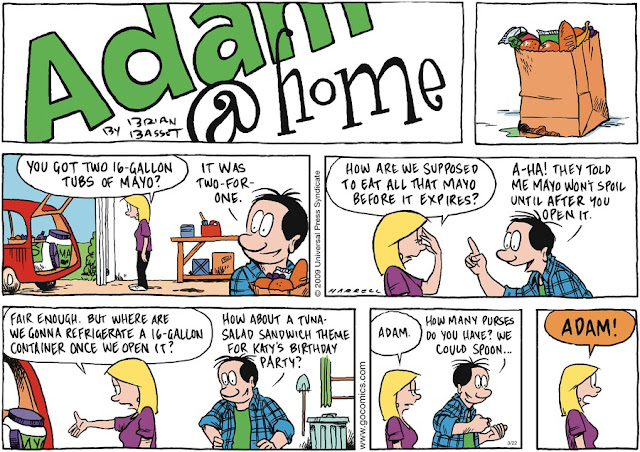 Sometimes in an attempt to keep ahead of the deadlines, cartoonists employ little tricks by employing time-saving techniques, such as reusing art rather than redrawing the same art over and over (like Blondie's bizarre Synchronized Breakdancing)  In Blondie's case, they did so by reducing the number of Sunday Strip panels from 12 to 9, counting the new title banner.  The last regular feature of this format was on October 26, 1986. 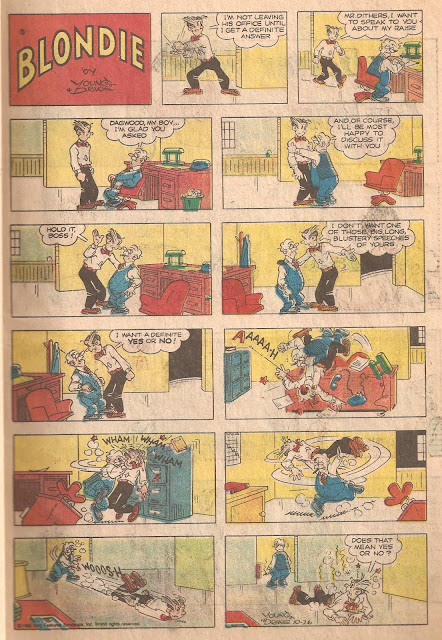 The very next week had Dagwood being dragged kicking and screaming into the 20th Century. 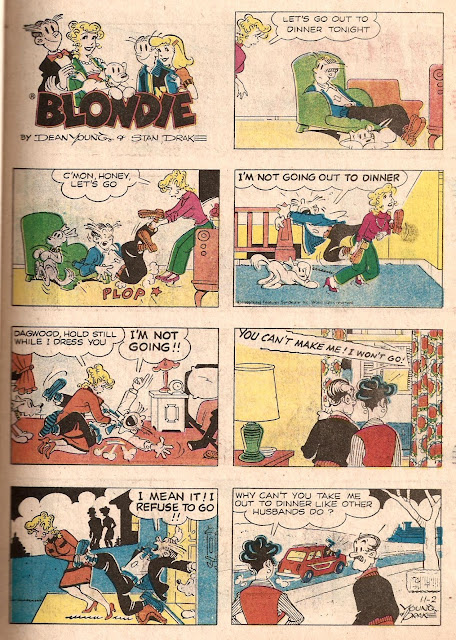 This time-saving device wasn't applied to the dailies until 1996, years later.

The comic above could've been modified to remove the 3rd panel completely, but would be missing the build-up leading to the punchline.  As with the laws of Alchemy, you gain something the same time you lose something.  Whether that loss is worth sacrificing for is constantly up for debate.
Posted by DeBT at 11:03 AM