The week of Passover officially ends tonight, which also ends my weekly deprivement of my favorite foodstuffs, bread and pasta.  You'd think giving up one category of the food pyramid wouldn't be as challenging as giving up meat for a day, until you realize just how dependent you are on certain foodstuffs.
There's even gluten-free Matzoh now, which should be difficult to create in the first place.
In order to get past this hurdle of consumption deprivation, there's several recipes to lessen the pain of withdrawal.  They're not exactly pasta substitutes, but they have potato starch in place of flour, which helps ease the baking process somewhat.

Making a peanut butter & jam sandwich with dry matzoh bread risks getting a lopsided result from the unbalanced fruit bits sticking out, and getting crumbs all over everything.  If creating flaky PBJs isn't your kind of thing, you could always put something else on them.  One required suggestion is to put egg salad on them to make them tastier.  I always prefer using Egg Matzohs anyways.

Of course, there's the definitive Passover appetizer, Charoses (pronounced Ka-ro-set).  For that, you need the following:
Grind the apples and walnuts in a blender.  (Separately, and chop the apples up so the slices will be easier to blend)  Don't leave the apples in the blender too long, lest they'd be reduced to juice - we want pulp.  The nuts can stay longer until they've been reduced to dust.  Scoop the contents of the ground apples & nuts into a large bowl.  Soak raisins in water, and let them gain extra wrinkles for awhile.  Add raisins, Cinnamon and brown sugar to the mix.  Depending on the concoction, feel free to add more apples or nuts depending on the consistency of the mix.  If it's too soft, then add more nuts.  If it's too hard, add more juice.  If it's too sour, add more sugar.  For years, we added plenty of sugar and Grape juice due to the walnuts being so bitter.  This year, the walnuts weren't past their sell-by date, so instead, we used the water from the soaked raisins as well.

Once you're done, put the brown mixture in the fridge to ferment overnight.  The next day, you'll have a representation of the mud the slaves used to slather on bricks.  Surprisingly enough, this concoction goes well with egg salad.  Try it! 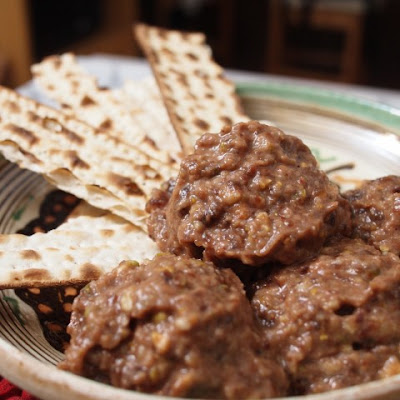 Being on a pasta-free diet means no regular noodles in your chicken soup.  Instead, you have to get by with either eating it virgin, or using egg noodles as a substitute.  To make egg noodles, you need the following:
Separate the eggs by putting the yolks in a separate bowl, and whisk the white bits (not the eggshells) until they're all frothy.  Add the yellow egg yolks to the egg whites and beat those up along with the rest of the ingredients.  (The oil in the mixture will make frying them easier, rather than lathering up the pan)  Make sure you keep stirring the mixture, lest the potato starch becomes as hard as cement.  Pour some of the mixture on a frying pan and cook it.  For some reason, the first batch comes out all ruined, but after that failure, every subsequent batch comes out perfect.  Fry and flip the fried eggs on the pan until they're cooked until you have no more egg mix left.  Take the pancake-like results you've got, and rather than pour maple syrup all over them, roll them up and cut them into pieces for your very own egg noodles.  I always found the resulting noodles to be too long for me, so I cut the rolled-up egg pancake in half horizontally, before making cuts vertically. 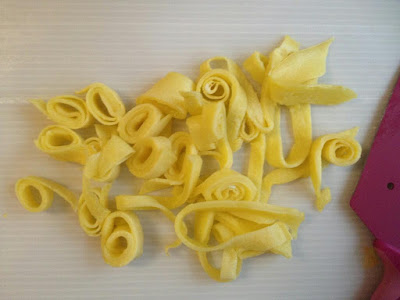 Of all the Passover meals, Tsimmes is normally reserved for Rosh Hashanah, but my mother always seems to enjoy cooking it for any Jewish festival, so I'm including it here.  Her particular recipe combines several into one concoction, which contains lots of the following:
Peel the carrots (about 10 stalks) then chop them up into circles, or if circles bug you, rectangles.  Either way, make sure they're bite-sized.  The same should be done to the sweet potatoes (about two).  Throw in about eight to ten prunes.  Put the chicken and beef in any way you like.  The order doesn't matter.  The onions can be left whole.  (Just remove the peels beforehand!)  Pour half a cup of honey in, then use warm water to extract the leftover bee barf.  We don't want to waste any potential sweetness, but take care not to use too much water, lest the stew becomes too liquid.  Cover the pot and put it in the oven on 325 degrees for three hours.  After that, uncover the pot and add some corn starch in water on top.  Cover the pot and put it back in the oven for another hour.  If left uncovered, it'll become all crusty and black.  Altogether, this slow-cooking recipe takes 4 hours to complete, which explains why it's not prepared often. 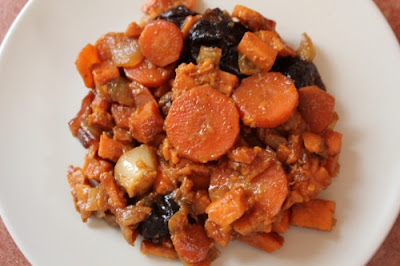 For desert, you could always simply purchase Kosher food.  Or, you could take the more difficult path, and prepare some Matzoh Buttercrunch of your own.  To make some, you need the following:

Cover the pan with aluminum foil, and spray the foil with nonstick cooking spray.  Cover the sheet with Matzoh, breaking pieces to fill the holes if necessary.  Melt the butter in a bowl (but not completely) and mix the melted butter with the brown sugar until they're combined.  Heat the mixture until it's boiled for about 3 minutes.  Pour the buttery sugar over the Matzoh.  Try to spread as much of the stuff over the squares as you can.  Put it in an oven at 350 degrees for 10-12 minutes.  Don't let it burn too long.  When it's out, sprinkle chocolate chips over the toffee layer and let it melt.  Then spread the chocolate cheer around.  Sprinkle nuts over if that's your kind of thing.  Let it cool in the fridge.  They won't all fit, so you'll probably have to stack them atop each other.  After which, you can break them apart into smaller pieces. 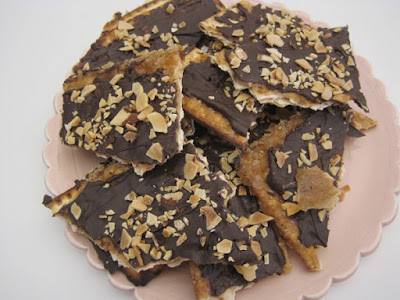 The strange thing about these foods is that they look utterly unappetizing, but somehow winds up being more edible than you'd think.  But then, the same could be said for seafood, which despite looking like the most repulsive items alive, are actually some of the tastiest living things on Earth.