This has not been a good year for entertainers.  David Bowie, Alan Rickman, Harper Lee have all died within weeks of each other.  And now, the musician Prince has joined their number.  Best known as a hyper-flamboyant male/female icon his unpronounceable symbol was best summarized as "The man formerly known as Prince". 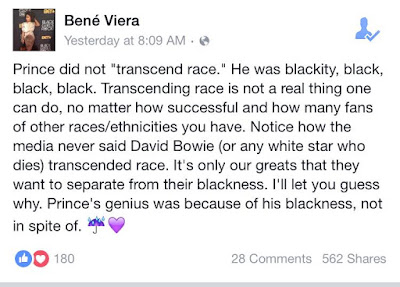 I wasn't much of a fan of these musicians, though from the online grieving loss, there's a palpable sense of loss that such blatantly open expressionists would never be seen again... until the next breakout composite weirdo breaks through.  You may laugh, but someday, Lady Gaga might be looked back with fondness. 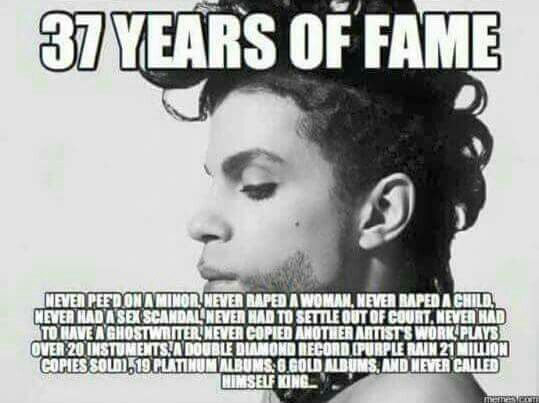 Of course, it's difficult for me to understand such admiration and devotion towards someone's work I have no familiarity with.  It's like a blind person hearing respect for a well-known caricaturist along the likes of an Al Hirschfeld.  They may have heard of their reputation and be surprised to hear they were still working on their craft, but any knowledge or respect of their works would be far beyond their comprehension. 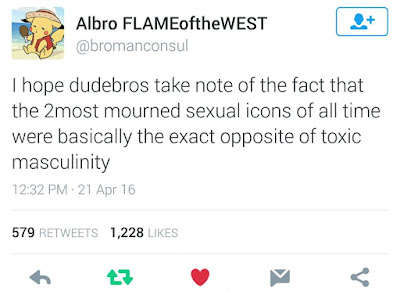 I was surprised that going through MAD's blog tribute towards Prince was just limited to some artists' caricatures.  A search through their keyword only turned up some extra Don Martin Frog comics.  My only passing familiarity with Prince was in the pages of MAD's group satire of three select Blockbusters, drawn by various artists, as narrated by the definitive film critics, starting with GhostDusters: 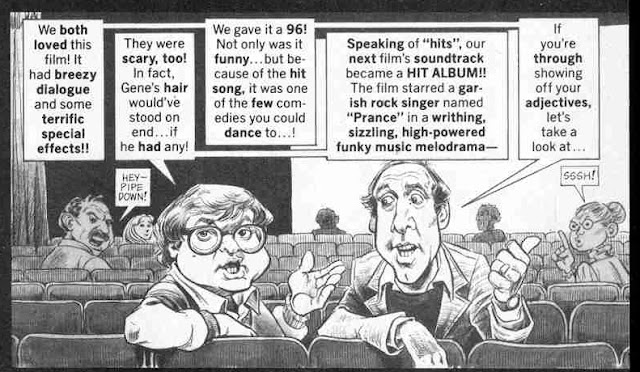 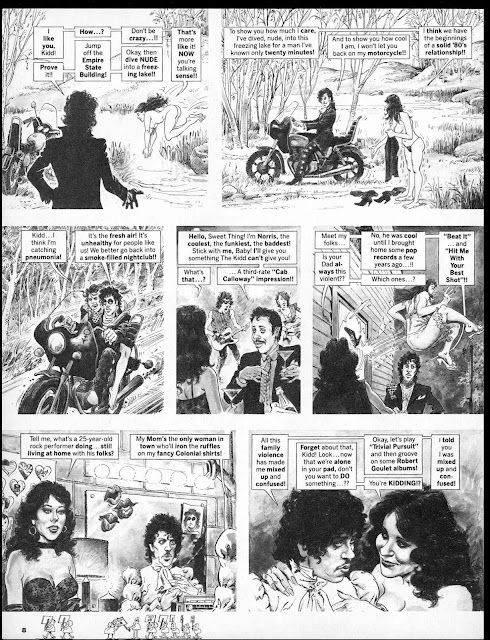 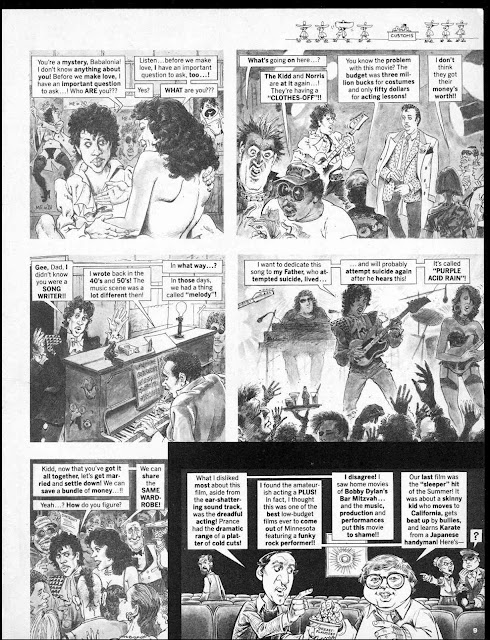 Naturally, from their severe takedown of the musical movie (which I still haven't seen BTW) gave me the impression that this wasn't exactly something I'd be interested in seeing anytime soon.  One could say that Prince's comfort over his display of his blatant sexuality confused people who weren't sure which gender he preferred.  For some reason, androgynous musicians wearing puffy shirts made people nervous, which just further attracted social outcasts who embraced his outrageous lifestyle.

There was even talk of a Simpsons episode back in its glory years of a sequel to the former insane inmate who believed he was Michael Jackson that never followed through.  Both creative sides had conflicting opinions of how to best represent the Pop musician.  One such subplot was Prince being amorously involved with Selma, Marge's sister, and there's Lisa's attempt to get concert tickets that's bafflingly foiled by a dangling spider.  (What is it about Spiders & Hollywood?)

Speaking of his closest pop-culture equivalent, Michael Jackson, Prince, for all his status, never degraded to a nostalgic state.  He didn't pander to Michael's obsession of all things infantile for a childhood he never had.  That certainly wasn't the case with my only other experience with the famed musician from the 5th Marsupulami album, Baby Prinz. 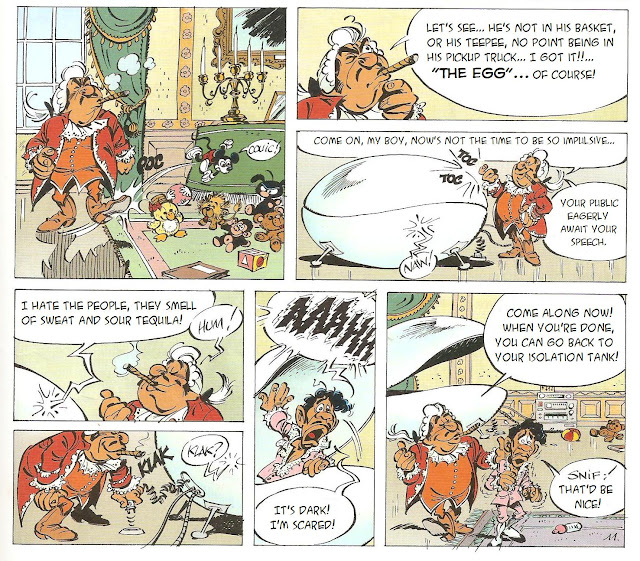 In this volume where the titular Marsupulami was sidelined for the human cast, the main plot focused on the trials of the remaining heir of a long-running Palombian dictatorship that's having trouble keeping the population from feeling dissatisfied for being under an oppressed thumb after years of matrimony rule. 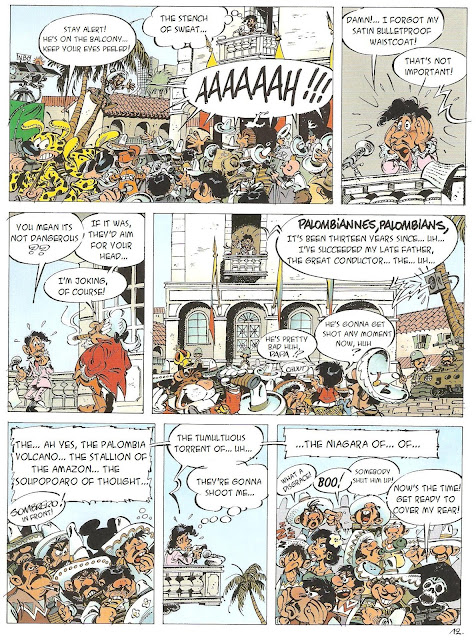 Another admirable trait of Prince was that he gave inspiring speeches for promoting other musicians who were just starting out.  Obviously, none of this is portrayed through in this less-than sterling rendition of The King's Speech. 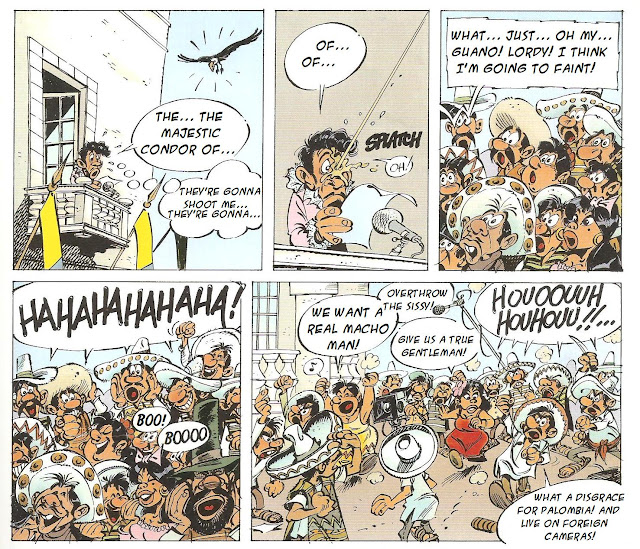 When the revolution and outcry has died down, and the previous regime is overthrown, the vacancy is filled and replaced with an even more ruthless dictator.  So, the populace wound up getting what they wanted.  Yaaay? 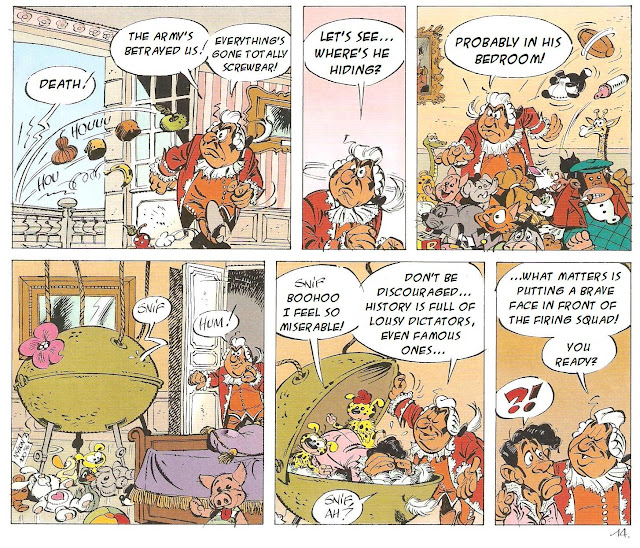 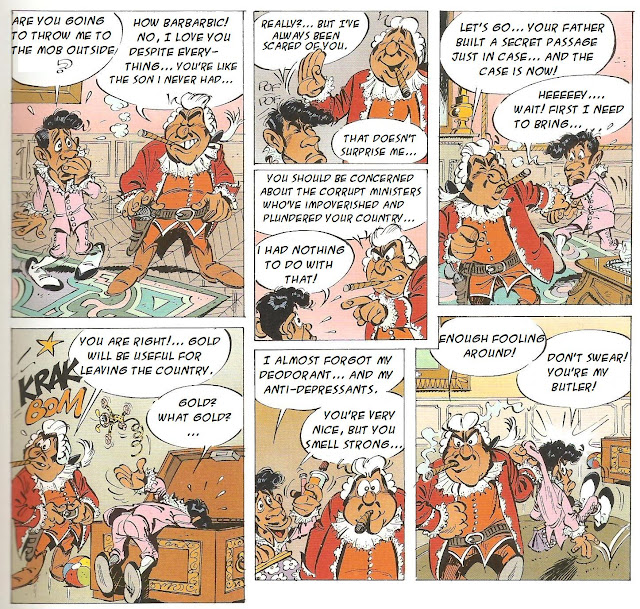 While Prinz and his butler are on the run, the two of them get split up, Prinz being kept for safety in a cage with an old Marsupulami.  Eventually, the elder animal and the deposed prince escape into the jungle for safety.

After various adventures with a teenaged couple living in the jungle (I've left a LOT out), the deposed butler eventually comes across his former ward again, where they discuss potential plans for the future.

While there was the possibility of a comeback, Prinz never showed up again in any future Marsupulami albums after this.  Possibly there was threat of copyright infringement or lack of celebrity interest.  Certainly, there are more flattering portrayals out there.  I just don't know where they are.
Posted by DeBT at 8:20 PM