When it comes to translating one language to another, there are potential pitfalls that come from not fully understanding the social ramifications of the individual words you're using that are close approximations to what you're used to in your home language.  Not to mention all the conflicting uses of punctuation that spell the crucial difference between Going to Hospital, and Going to The Hospital.  One of the trickiest things to convey is correctly showing someone unintentionally misusing language.  At best, you have amusing Engrish that permeate the pop culture landscape, and at worst, becomes almost intelligible.

The Batman Odyssey, a marvelously insane comic, had a joint summary between two comic fans, David Wolkin and Laura Hudson who gave a hilarious recap that was far more comprehensible and entertaining than the actual comic.  They also cleared up some of the more baffling narrative choices that would've been completely incomprehensible for lesser minds.  To put it in their own words, "Every time I think The Batman Odyssey can't get any crazier, it suddenly does."  Each subsequent issue gradually ramped up the madness factor to the extent that by the time the last few issues came out, they'd given up attempting to tackle it out of sheer desperation and exhaustion.  David threw the comic away after reading a few pages, and after another issue, he was so traumatized he had to get a kitten to recuperate.  (There was some moving involved too, which may have been a factor)  It's been suggested that there be a Brave & Bold episode adaption as examined by Bat-Mite, with Mr. Mxyzptlk and Ambush Bug in a kind of Mystery Science Theater 3000 tribute.

At the very last recap, a commenter, Ben Freeman made the following observation:


The most fascinating thing about Batman Odyssey is how close it can come to making sense. Take "Acquit yourself, you kung fu movie guru", for example - it's not so very hard to see how that line is SUPPOSED to work. It would look fine (if still a little odd for Killer Croc) as "Is that all you've got, you Splinter wannabe?" or "Fight back, Mister Miyagi" or what have you. But somehow, the actual words on the page have been chosen from synonyms which form a sentence that nobody would ever actually say. And the ENTIRE COMIC is like that. It's like the script was somehow run through Google Translate into and out of Korean or something.

Sadly, this results in even some of the comic's pretty cool moments (like Batman instantly knowing that Deadman has possessed someone because they switch from left to right handed) being rendered into surreal nonsense ("right-handed. other stuff.") And Adams' tendency to have every character speak entirely in sentence fragments separated by ellipses only muddies the waters further. 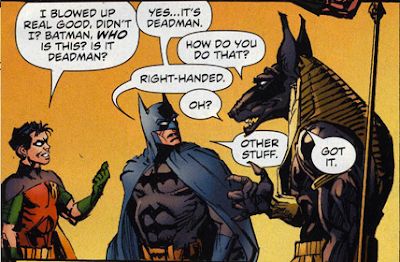 Still, the script's tendency towards total screaming madness did give us the line "and octopus of a thing - and I have but an inkling!", which has since become a catchphrase of mine, so it's not all bad news.

On the other end of the spectrum are comics that've been translated into one language, then re-translated into another.  As with photocopying from various sources, something is bound to get lost in the process.  Especially if the re-translation is too faithful.  One of my linguistic challenges when reading a badly translated piece is to try to rework the text around to a more condensed readable form. 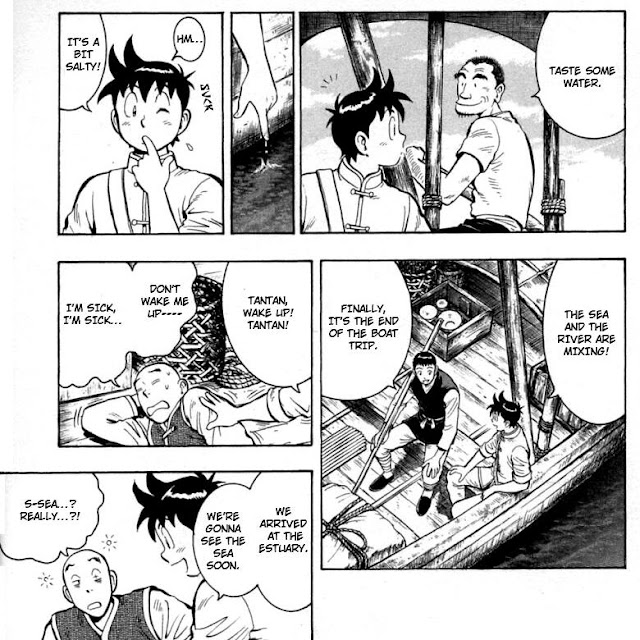 In this instance from Shin Tekken Chinmi, the above page seems perfectly normal at first glance.  But after browsing several pages in quick succession, you gradually begin to notice that the speech pattern doesn't flow as smoothly as it should.  For instance, the following dialogue could be modified like so:

Sailor: Taste the water.
Chinmi: It's salty!
Chinmi: The river is spilling into the sea!
Shuufan: Our boat trip is almost over.
Chinmi: Tantan!  Wake up, Tantan! (Unchanged)
Tantan: Ugh, don't bother me... I'm seasick...
Chinmi: We're at the bay.  We're gonna see the sea soon.

See how much easier and faster it is to follow?  For typical elementary Shonen-type Mangas like these, large clunky words slow down the narrative.  Estuary is the technically correct term, but it doesn't exactly roll off the tongue.  If English teachers wanted to motivate their students, they could have them correct online work, then make the necessary modifications where necessary, since pointing out other's faults is more fun than concentrating on your own.

In my instance, I almost wound up doing some self-correction of my own.  District 14, a wonderfully inventive series is set in an alternative 1920s civilization where humans and anthropomorphic animals are caught in a conflict involving themes of journalism, protection rackets, psychic mediums, illegal aliens and an immigrant elephant's backstory has allusions and callbacks to War & Peace.  The story takes so many inventive twists and turns that I had absolutely no idea what was going to happen next, and I looked forward to seeing the next page.  About halfway through the first season, there was an incident involving some French cats, and at first, I thought the translator made an amateur mistake.  But then I quickly realized it was intentional. 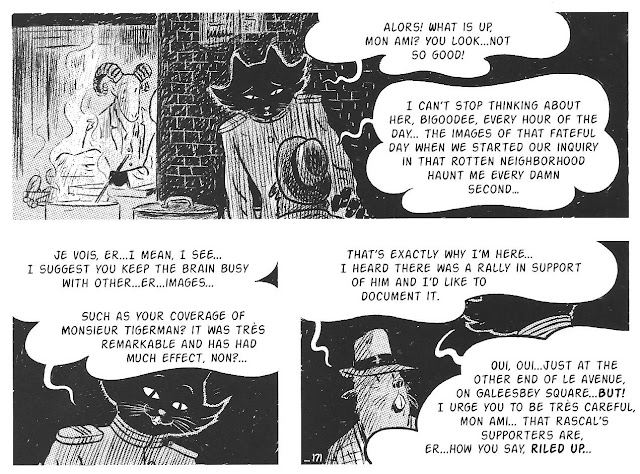 In this instance, in the second panel, when he says "keep the brain busy", he really means "keep your mind occupied".  The purpose of such an act is to make the reader think about a character's manner of speech, and as such, resist temptation in making their script free of errors, so that some linguistic mistakes still make their way through.

One of the best examples of intentional mangled English comes from the PBS classical adaption of Agatha Christie's Poirot, as portrayed by the definitive and inimitable David Suchet.  I was able to enjoy watching the episodes again after the latest re-release on DVD finally acknowledged my complaints and had subtitles added to them.  In one of the episodes, Captain Hastings talked about abstract art, and how you need to view it in a different way to fully understand what you're seeing - that a transparent outline could show both the front and back of a person.  For years, I was continuously perplexed as to what the opening image was supposed to be.  It looked like a sword in midair, next to a moon, that suddenly became deformed, then windowpanes of the Belgian Detective would taper down the middle. 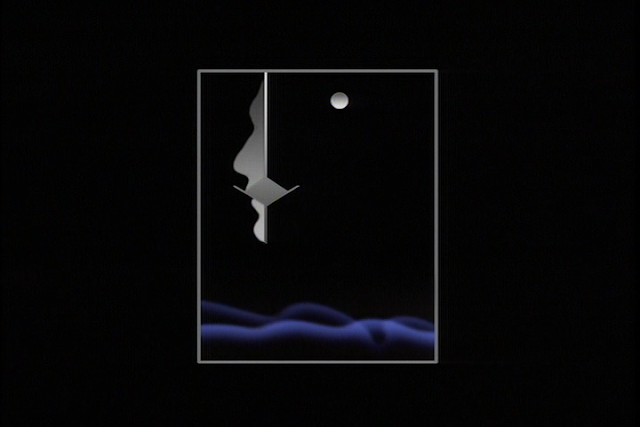 It wasn't until I paused the screen before the crucial eye-catching distracting detail that I finally noticed the significance of the warped sword - it was actually a profile of Poirot himself, with the edges of the sword acting as a representation of his mustache.

One of the most amusing things is how often Poirot (not a Frenchman, but a Belgian!) continuously gets certain English phrases just slightly wrong: 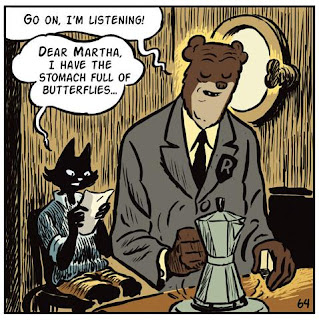 That may be to your profit (advantage)
Is there nothing Poirot cannot turn his finger? (hand?)
Yes, we pull ever gently the leg.  (pulling your leg)
And on the debit side? (bad side)
I am in something of a difficulty.  (quandary)
What's the word?  Bloater?  Kipper?  (Red herring)
She is close to the breakthrough.
We'll be out.  Hold the castle.  (fort)
Better the safeness than the sorrow.
We must not try to walk before we can jump.  (look before we leap)
Wonders will never stop.  (cease)
I need a... lampe de poche.  What is that, a lamp of the pocket?  Torch!
Twins?  Yes, two pins in a pot.  (peas in a pod) 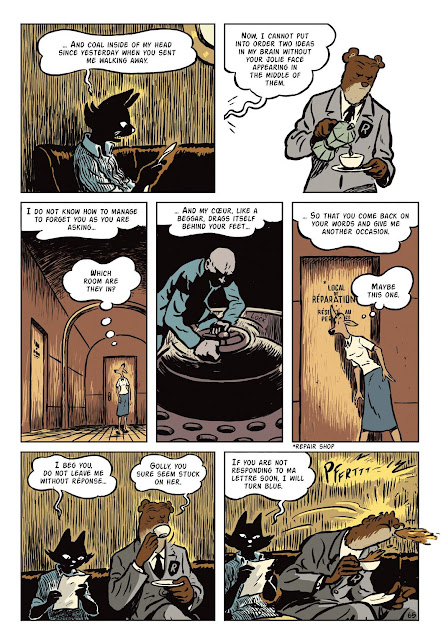 Still very far from being the species extinct.
Not suitable for the humour.
Do not be stinting with your praise.  (damning with faint praise)
Running up the wrong tree.
I'm still a force to be calculated. (reckoned with)
The case is dried and cut.
The quickness of the hand deceives the eye.
He's mad - taking leave of his rocker.
There should not be the sleepy dogs.  (let sleeping dogs lie)
He's been sold a pup.  (a dog)
Barking up the wrong bush.
Kindly do not band together against Poirot.  (gang up against Poirot)
The appearance of being above the board. 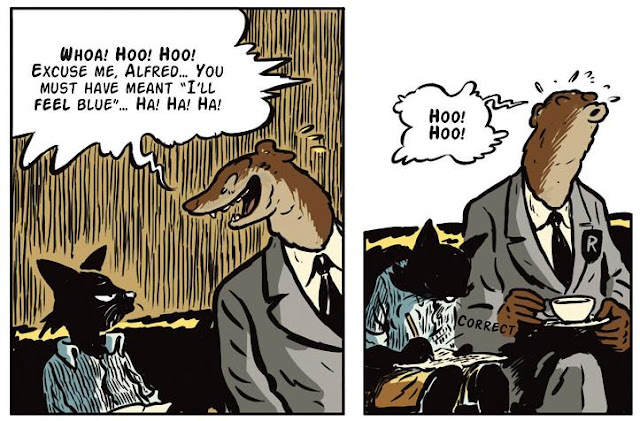 Shortly after compiling this list, I came up with a Poirotism of my own: