Three years ago, I posted a few pictures that I mistook for other things.  Since then, I'd felt that there were a few images that were missing, and decided to keep a collection of them for further investigation. Misunderstanding what a picture is conveying is hardly anything new.  When seeing something unusual that falls outside of our knowledge, we build on our previous perceptions to bridge the gap.

Kazu Kibuishi's Copper is a webcomic that has some critical appeal, even though it's never really warmed up to me.  But I was familiar enough with the character design to feel that it was replicated elsewhere:

If you looked at an early edition of Brian Michael Bendis' Fortune and Glory, you'd be forgiven for thinking that you were looking at an extreme close-up of a one-sided dialogue of a dog and his nose, rather than the edge of an eyeball and a telephone receiver.  Unless you were familiar with the scene in question, you'd have no idea what you were looking at here, which is usually the case for first-time readers.

While purveying online archives of newspaper comics, I found out that I didn't start to seriously keep my collection of Sunday comics until Garfield replaced Heathcliff and Superman, neither titles which previously held my fancy.  It's somewhat amusing to think that the commercial fat cat grabbed my attention better than the competition.  In a sense, Garfield helped fuel my comic addiction, and it was all because of this: 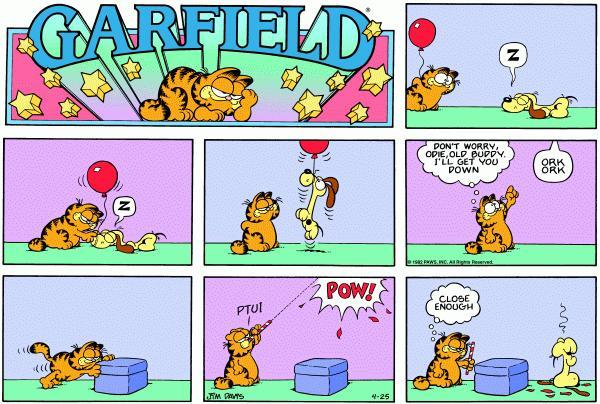 However, while I saved the Sunday that had this particular Garfield, I didn't make a habit of keeping Sundays until several weeks later.  That could be because I was continuously perplexed by the last panel, which made it look like Odie's head had suddenly converted to an exploded popcorn kernel.  It took me years to understand that I was looking at the dog upside down and backwards.  Also, Odie's never shown this unusual position before or since, which only compounded to the confusion.

Another instance would be a classic Calvin & Hobbes moment where the bratty kid touted a poem titled "The Dad who Lived to Regret Being Mean to his Kid".  (I'm just sorry I don't have the Sunday comic variant, which had "Barney"'s shirt coloured a shade of blue, making the thinly-veiled expy less obvious)  What wasn't entirely evident upon first reading was that Barney's nose (represented as a black dot on his face) and originally shown on the opposite side from the Sunday page was rapidly forgotten in the context of the 2nd panel with no other character sheets for comparison and contrast.  I always thought that Barney in the 2nd panel was shown with one eye, which would be a kind of artistic license, similar to having badly-spelled backwards letters alongside childish drawings.  However, if seen closer, you'll see that the "eyelid" is actually a unibrow with half-closed confident eyes.  This subtle detail was completely lost with newspaper reduction, and even book publications. 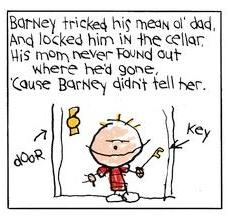 Haphazardly rushed sketches can make it difficult to tell what's going on, and nowhere is this better reflected than on the rough drafts of One-Punch Man where some pages can be hard to understand, due to wonky perspective and shifting viewpoints.

When seen from one angle, you see the profiled face of a horned monster making an unsubtle threat.  When seen from another angle, you see a largely smiling devil, stretching his three-fingered palm towards the foreground.  Not unlike seeing a young woman and an old lady, or a rabbit and a duck in the same drawing.  In this instance, it was two different monsters with similar (but different) features.

This wasn't just limited to comics, but also applied to Videogames themselves.  My first instance was the classic lineup of Nintendo titles at someone else's house, from The Legend of Zelda and Super Mario Bros.  At the time, I had absolutely no idea what I was looking at, and couldn't multi-task the control beyond using the control pad and action buttons simultaneously.  Because of my lack of dexterity, I was constantly running face-first into Goombas, who for all intents and purposes, looked like faces that were crawling on their mustaches. 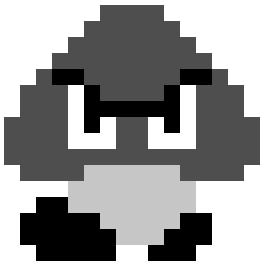 Did I also mention that the TV set was in black and white?  (I was flabbergasted when I saw Nintendo action on a large colour screen years later) While my Videogame skills were still in its infancy, the cartridge owner had more practice, and was able to make it all the way to the first castle, past the fire-breathing dragon, touching the magically glowing axe on the other side (which didn't hurt), making the bridge vanish behind them, making said dragon touch the sudden lack of ground underneath his feet before plunging to a fiery death.  After which, the plumber would move on to the next room to meet... 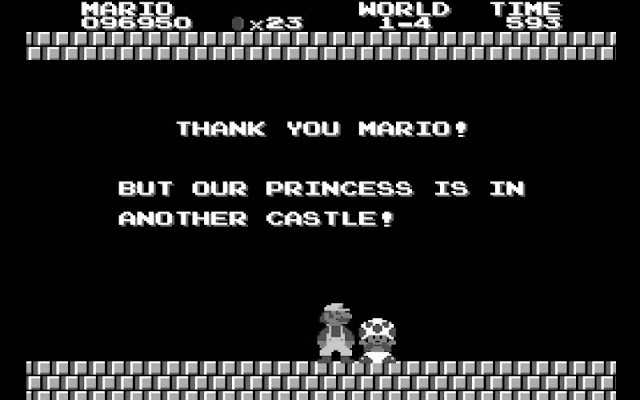 If you said a Mushroom Retainer, you obviously read the instruction manual.  To someone who had only the hint of fantasy atmosphere with a castle setting and climatic battle, you could forgive me for thinking that this figure was anything but a wounded knight waiting to pass on his dying message to his savior.  If you don't see a fully-armoured man cut from the neck down, with an unusually large Medieval helmet over his frame, you've missed out on alternate interpretations on a large scale.  (The "helmet" would extend beyond the mushroom hat, down to the outstretched arms, to the retainer's "vest" which would be another mistaken mustache of its own)

This was perfectly understandable, because Videogames were venturing uncharted territory with their intuitive dream logic that made perfect sense to children, and were absolute gibberish to adults who couldn't control the characters with their clumsy fingers.  Not to say that everything was entirely obvious upon first sight - many players of the first Legend of Zelda were lost trying to find the elusive 7th and 8th dungeons without outside help, bombing and pushing everything in sight, never knowing that the cryptic advice in the 6th dungeon was a clue.  (Let alone burning trees with a candle that only worked once per screen)  And good luck trying to complete the 2nd quest without help.  Fortunately, there were informative players guides from the (now-defunct) Nintendo Power magazine, which pointed the direction you'd need to go to complete the game to your satisfaction.  The later dungeons were left mostly unmapped, but at least allowed us the joy of discovery once we figured out where the damned entrances were.  There was also a teasing image of the final boss, The Evil Ganon, who in the instruction manual, was drawn as a highly detailed question mark.

So when we finally got the chance to see the BigBad ahead of time, we had no idea what we were looking at.  Rather than the image of an overly large pig, we were seeing a wizard with a pained expression with bat wings.  Later, I found out that what I thought were Ganon's eyes was actually his nostrils. 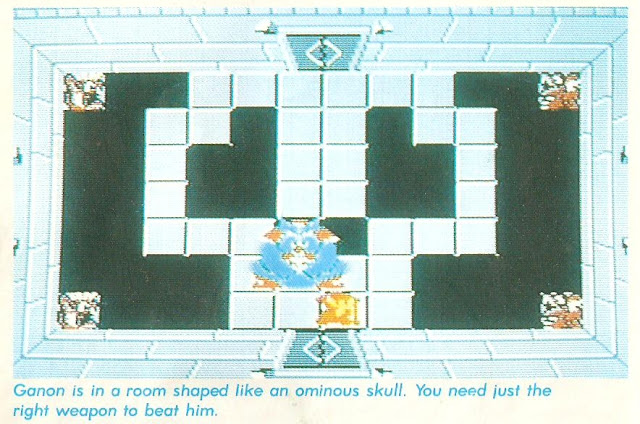 Another easy mistake regarding Ganon's face was in the less than popular sequel, where he would show up after you easily lost your lives due to poor hit control.  Rather than seeing a pig nose underneath his eyes, I saw what amounted to an extra-large frown instead, which made him look more threatening.  Even now that I know that it's supposed to his nose under there, I still can't help but see it as a mouth. 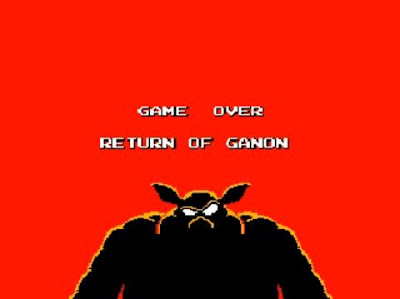 This isn't limited to my perceptions alone.  A Deviantart artist pointed out the surreal appearance of one of Link's iconic villains, Agahnim.  This was because the pixelated area of his tightly contorted mouth was overshadowed by the detailed folds of heavy clothing.  Some high-detailed graphics can render the essence of a drawing, but this is one instance that could use some drastic reprogramming. 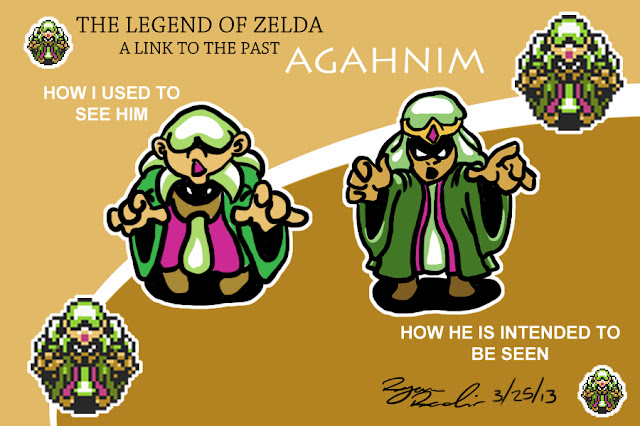 Once I got used to the imagery of Videogames, I was unconsciously seeing their Japanese influence, even as I remained ignorant about their country's origin.  One such instance was the weirdly titled Kabuki Quantum Fighter, which showcased the popularity of long/large-haired drama archetypes.  From there, it was easy to make the mistake of seeing Area 88's retitled game logo for something else.

One of these is the head of a flaming unicorn, and one is the head of a smiling demon.  Can you tell the difference?  Looking over these scans, I've noticed that I've frequently mistook limbs for mustaches, necks for mouths, and noses for eyes.  I take it people out there aren't so easily fooled. 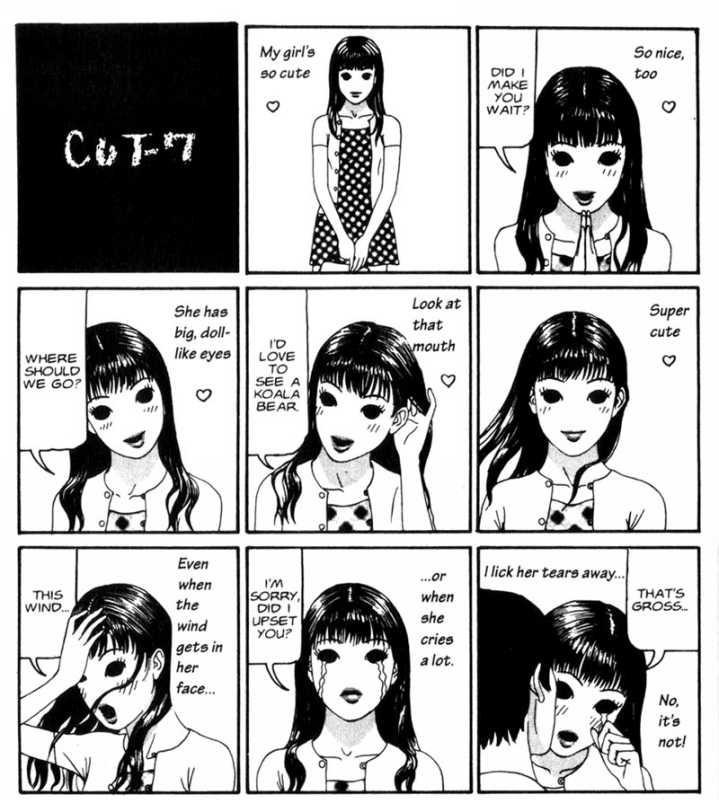 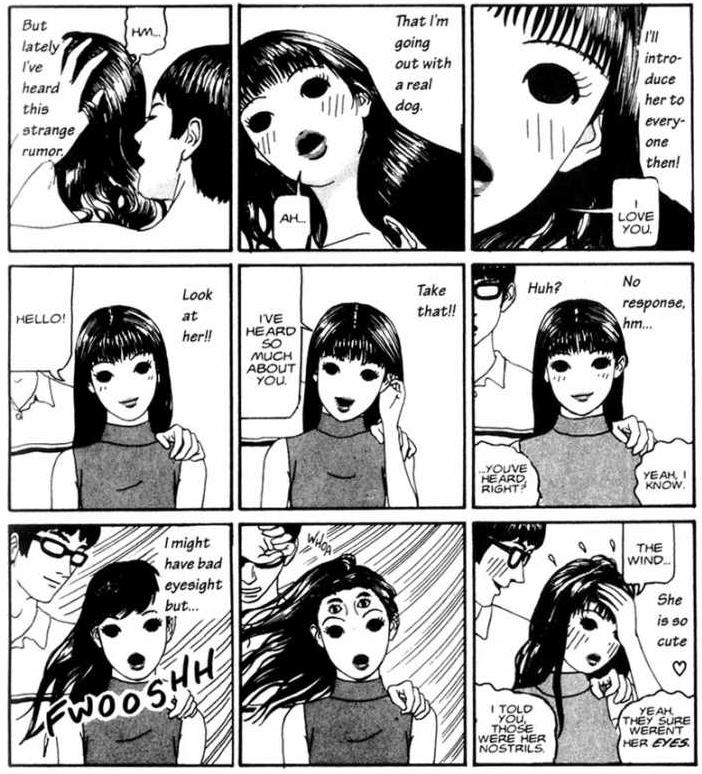