Idle Games - the Bane of my Existence 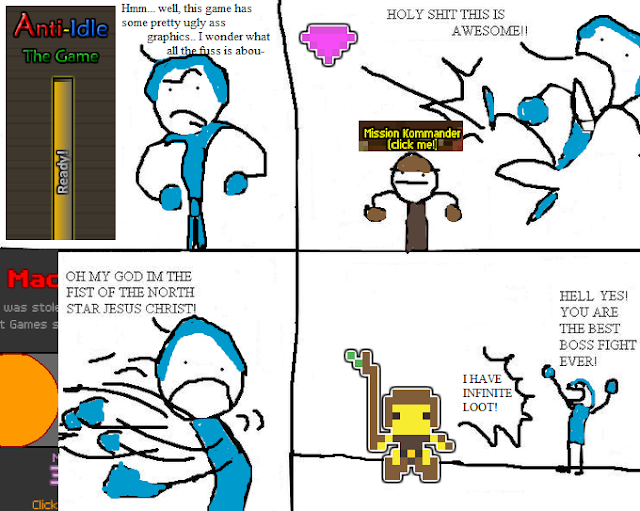 To any avid readers of my blog, I’m sure you might’ve noticed a certain decline of entries as well as quality of posts, with brief bursts of creativity coming few and far between.  There’s a (stupid) reason for that, and it’s something of a secret shame that I’m now, like recovering alcoholics, willing to admit.  For the longest time now, I’ve been hopelessly addicted to a new brand of online gaming that’s only recently gained traction and copycats - Idle Games. 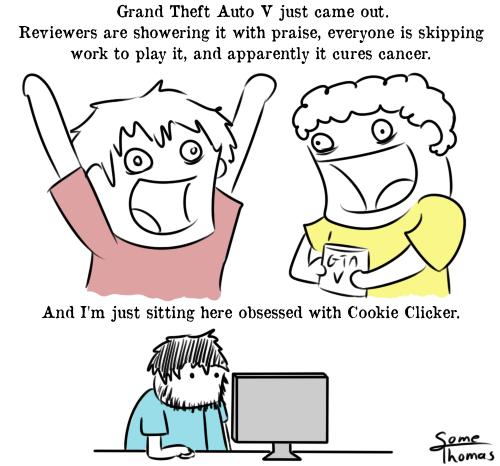 These notorious timesinks can be worse than Candy Crush (which I was also addicted to, until I ran out of patience at a level that required more chains / powerups than I was capable of getting through luck).  They start out so simply - do one action multiple times to gain some currency that’ll do the job for you.  Gain more currency, and the computer can do the job faster than before.  The rise in mass income will be necessary in order to obtain higher-priced items that’ll make the computer work faster.  And once you’ve finally gained enough, what do you do?  You can choose to go back to start, only this time, you’ll be able to regain your resources faster than the first time around! 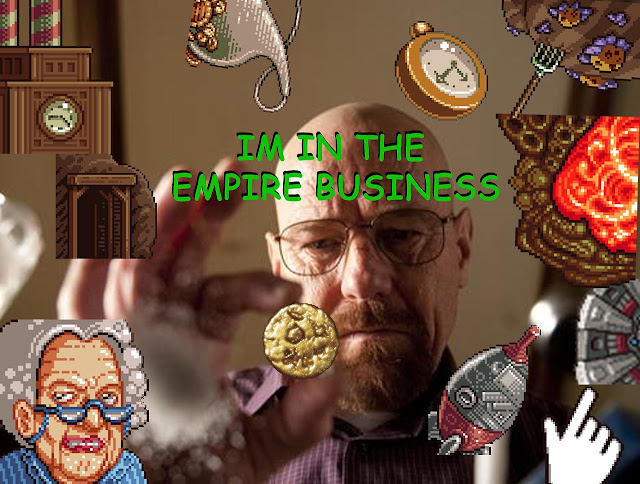 If there was ever a cure for narcolepsy, Anti-Idle would be it.  In fact, Anti-Idle was the main reason behind why my mouse broke, which caused me no amount of undue aggravation, because I was double-clicking when I needed to single click instead.  This wouldn't be much of a factor for Button Basher, but a serious impediment for Whack-a-Greg, FCG and using enhancements. 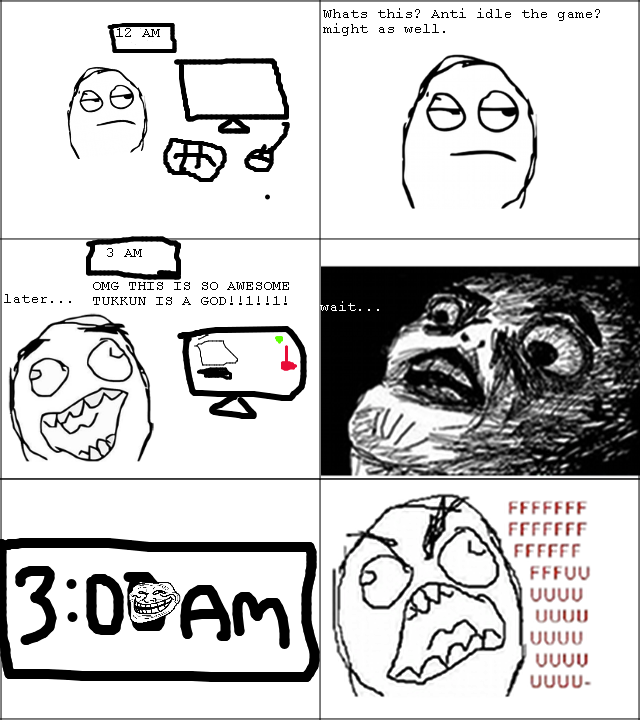 There have even been articles about these Incremental Games, which pointed out the irrational appeal of the satisfaction of having progress made while you’re not even looking at the screen.  There’s just something about obtaining massive amounts of false profits that just rings a compulsive need we didn’t even know we wanted until we got it.

However, there were some significant decrements to this.  For starters, if you tried to use another browser, window, tab or program, your process would be radically decreased, since the Frame Per Second (FPS) would be affected by the amount of conflicting data competing for your attention.  Which meant that you had to compromise by devoting all your time to one single screen, and having reduced windows for all your other programs for maximum effect.  The other detriment is that just standing by idly isn’t good enough - you need to actively play the game to achieve the numbers needed to accumulate ever-increasing rewards.  I was spending a lot of time planning ahead, trying to make use of time-specific events, constantly reshuffling my inventory and stats. 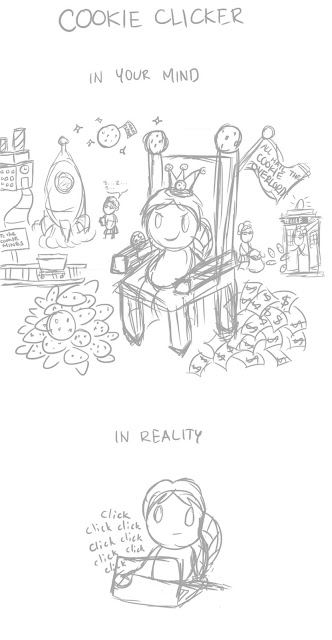 This plays havoc on anyone with OCD tendencies, since these games have achievements and quests that require compulsive hoarding of supplies in order to afford the very things you want.  Why settle for a measly 10,000 cookies when you can buy a machine that’ll net you 100,000 within seconds?  It’s all for the satisfaction of seeing that tiny blurb “Achievement completed!” pop up.

I was having fantasies of doing an elaborate Game Novel of Anti-Idle, not unlike those Worlds of Power books of yesteryear.  Mine would involve a simple farmer boy who, once he'd saved enough money from harvesting trees, was able to go and do some basic training, which would allow him to press a button, play in an arcade, bet on races, play card games, play with the stock market, a mock tabletop RPG, and even do some fishing.  All this would be interlaced with his involvement in adventuring, which would for the most part, be fairly linear, going into new unexplored territory, face a strong enemy, and be surprised to find out they'd died and lost all their rings.  At some point, the character would be able to be strong enough to face down the embodiment of CHAOS, and eventually, other strong bonus enemies that'd increase his fighting power.  This would give the sensation of playing the game without actually playing it.  Of course, this would need time away from the game in order to write said Fanfiction, of which was becoming increasingly rare.  For a long time, Anti-Idle was the only thing that made me feel alive.  However, at a certain point, there comes a time when a game no longer delivers the satisfaction you’re constantly seeking, and the lack of updates finally clinched it for me.  I’d been compulsively playing, hoping that I’d be able to make use of my hard-earned work, since it’d be such a waste if all this effort was ultimately for nothing. 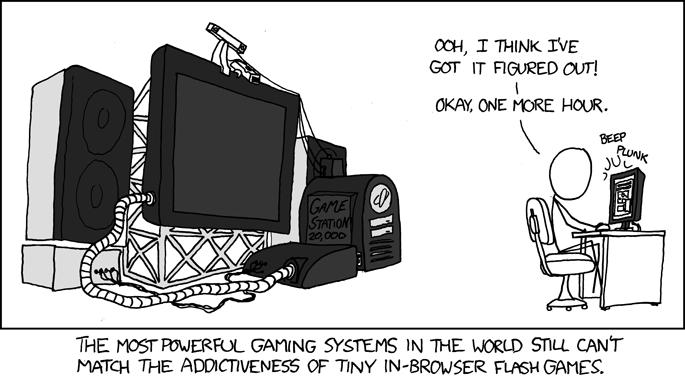 It was only recently that the creator, Tukkun, announced that he’d been getting tired of working on Anti-Idle, and his computer containing files relating to the game recently crashed; that he announced that he was working on another incremental game that would have ties to his popularly broken game.  I knew that I would be able to stop once I reached a certain level of completion, but thought it would be two months from now, when I felt confident that I’d do enough Impossible Ascensions.  (If these sentences mean nothing to you, consider yourself lucky)

Sometime last night, my modem suffered a temporary Critical Existence Failure, and couldn’t connect to the internet.  Fortunately, my game continued to play on without further assistance, but it worried me that if my router no longer worked (and on a national holiday that the stores were closed), I’d have to preserve my daily run by transferring to another computer that I wasn’t comfortable with.  At that point, I realized that I was going through a lot of trouble and effort for a game that was taking up too much of my life, and saw this as a big honking neon sign that maybe it should be time to finally stop. 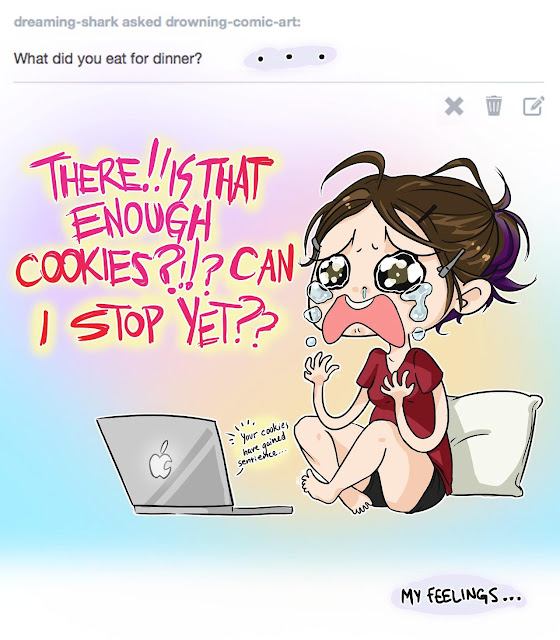 Now, maybe I’ll go back and play again when there’s confirmation of updates, or I’ve got enough time on my hands to waste several hours going through the Endless Dungeon to acquire higher tiers of Demon Slayer Armour, but the amount of effort needed to acquire these items suggest that I’ve gone through enough punishment.  In the meantime, I'll be going through withdrawal symptoms, which hopefully, will spur larger bouts of creativity from my stimulant-deprived mind.