Ain't She a Stinker?

Originally shown on December 29 1985, this For Better or For Worse rerun was something of an oddity.   it had the following setup: 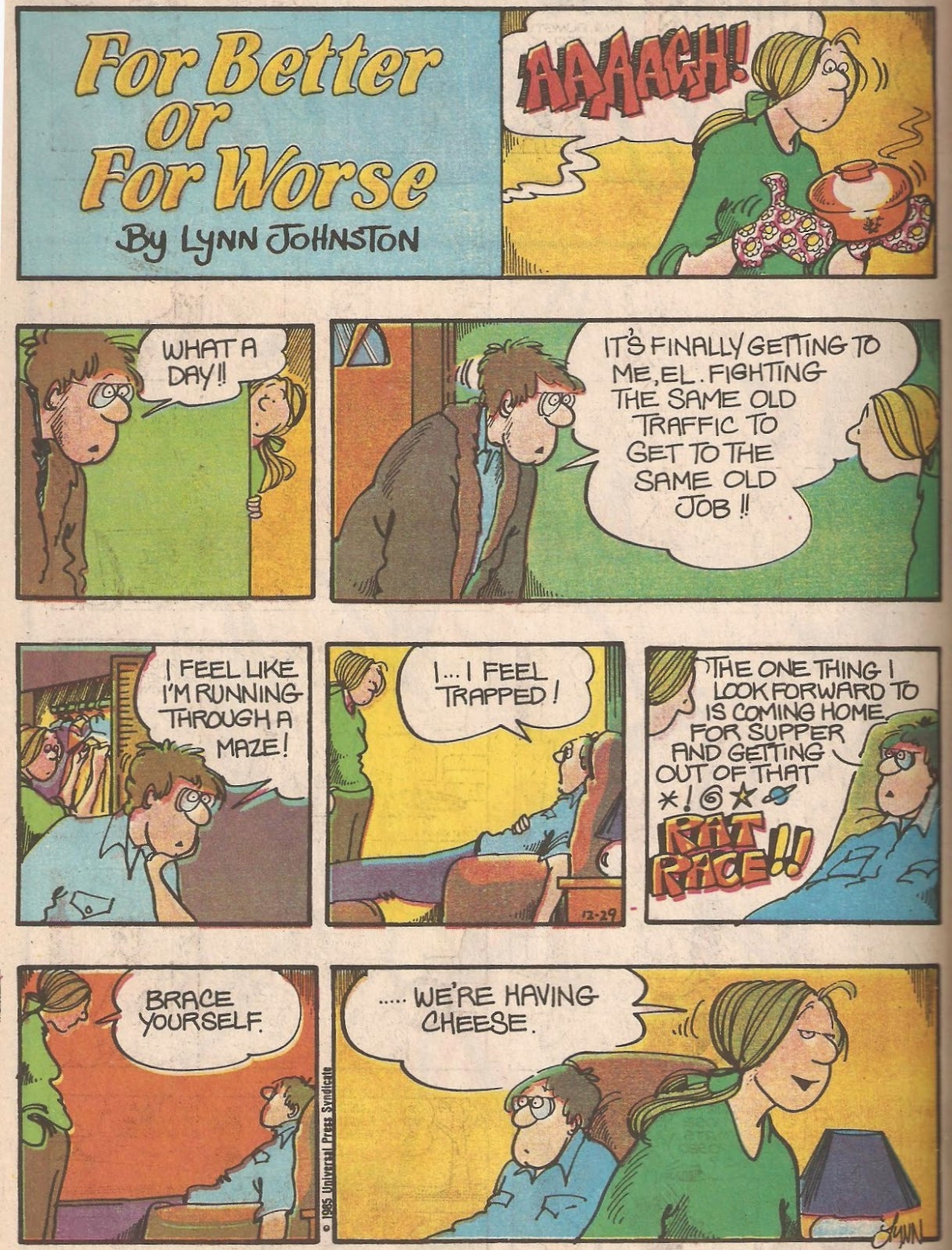 This was a severe departure from the actual husband figure, Rod, who actually enjoyed his profession as a flying dentist, and was persuaded by Lynn Johnson to quit out of fear of anything happening to him while he was gone (most likely paranoid fears of having affairs with his female working staff).  Figuring that her audience wouldn't find the prospect of a working man who was happy about his job believable, Lynn changed this to the more typical complainable aspect so commonly known elsewhere.  However, when it came to reprinting, this was one of the few strips that wasn't available in the cartoonist's archives.  As a result, she decided to make up for this oversight by redrawing it.

This was during the tail years where Lynn Johnson had the wise idea to have a circular plot and continue new storylines with her shaky old-style artstyle.   However, it'd been so long since she'd worked on those strips that long-time fans could tell the difference, while older fans couldn't.  This was further exacerbated by her inability to separate her personal agendas from the potential untold storylines that were happening offscreen.  There were realms of characters who fell out of favour, ranging from Greg's punk teenage daughters, to Annie's children who were discarded to focus more on the Pattersons and their inner circle.  Even Lawrence, Michael's best friend was phased out after his coming out of the closet to focus on Joseph Weeder, who was a closer expy of Aaron Patterson, the original avatar for Michael Patterson.

Having done a copy for the online archives, Lynn Johnson apparently wasn't completely satisfied with the results, and decided to draw it yet again for the newspapers. 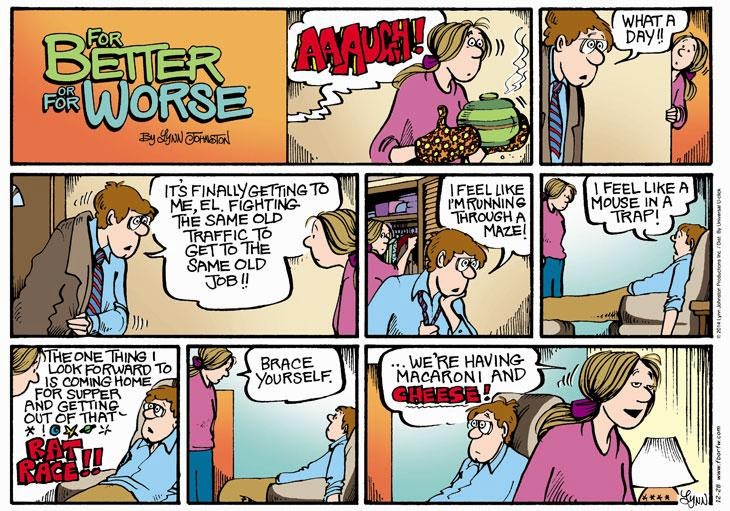 They say that analyzing humour is like dissecting a frog - it's messy, and the patient dies in the process.  Since this joke has already been butchered, let's examine it in a panel-by-panel basis, shall we? 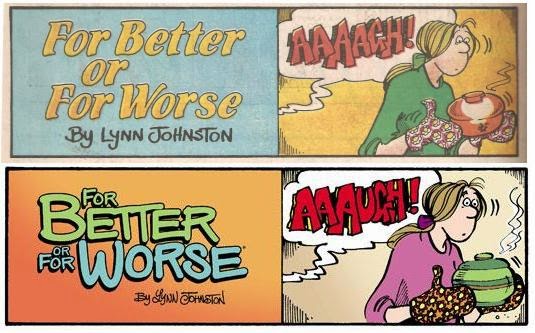 The throwaway panels are easy to analyze, since there's only two examples to work from.  The biggest obvious difference is the title font between the old and new style.  From my original Sunday comic, Elly's oven mitts are purple with yellow sunflower patterns, compared to the new strip's orange suns pattern.  Also, the pot Elly's carrying in the original is hanging in midair as a result of John's screaming, wheras in the latest redrawing, this scenario is completely misinterpreted by having the (now-green and different design) pot look completely safe and stationary between her hands.  One more minor nitpick - the scream has one "A" replaced with an "U", changing an "AAAAGH!" to an "AAAUGH!".

Moving onto the source of the scream, John's hair looks more haggard in his appearance, with his suit still buttoned up upon arrival, compared to his open-tie policy in the remake.  This clothing factor will become an ongoing issue of investigation for the remaining panels.  The following have mostly been heavily noticed by HowTheDuck's analytical detections with some of mine added into the mix. 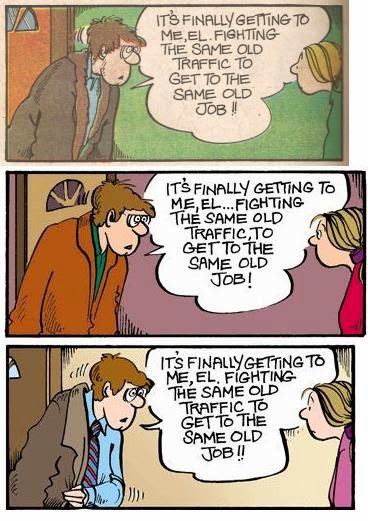 The dimensions of this panel is slightly off with the second example, which could be why it was redrawn, since it wouldn't match the newspaper's strict space requirements, and was only for the online version.  Furthermore, the position of the door in the background keeps changing, being unable to decide whether it should be partially open or hidden from view.  Regarding Elly's face, upon seeing her husband coming home, her eyes are different in all three versions: Concerned, Wide-eyed, and Non-committal.  In example 3, John is taking off his coat himself, showing his striped tie in all its glory, where it would've been previously hidden.  The second version's text also has some ellipses after "El..." and also only has one! exclamation mark instead of two!! for emphasis.

If you look above, you'll notice that in example two, Elly has completely disappeared in putting away John's suit in the closet, which serves to further de-emphasize John's complaint by downgrading his exclamation to a simple period.  Also, in example 3, John is pulling off his tie.

This is easily the biggest discrepancy between all three examples.  In the first version, John feels trapped in a position he can't possible get out of.  The second version seems like the closest to an accurate metaphor for the daily Rat Race, whereas the third version tries too hard to extend its metaphor completely.  While using different words to explain things is a sign of writing creativity, using synonyms all the time where not applicable can only cause confusion.  Also, in version 3, John's eyes are drained of all life, his hand is no longer resting on his stomach, and the lamp on the table is missing.  Likewise, the armchair changes manufacturers three times, including having an expendable footrest.

While the monologue remains consistent for examples one and three, example two has the largest change, including removing Elly's poking head to make room for John's rambling and have John's polka-dot dandruff pattern above.  As long as we're analyzing the swearing (or lack of), it should be noted that there's an extra "spark" added after the planet symbol.  Whether this addition makes the swear more explicit or not is up to how large your imagination goes beyond adding a plural letter.

"Brace yourself".  Fitting words, since John's legs are at different angles, and can't stay still, going from lying flat out, to bending at an angle, to simply getting off the comfortable footrest for some reason.  Textually, the one version that seems improved on is ironically, the second version, where the ellipses are continued on to the last panel.  Also, the table end is gone from the other two, and a mysterious door has popped up in the third.  Furthermore, Elly's rumpled disheveled look of having her hands in her pockets is made more elaborate by having the wrist skin showing instead of sleeves.  In version 3, Elly's hands aren't in her pockets at all, much to John's blank gaze's dismay, which is a sight better than Elly's expressionless hair covering her features in version two. 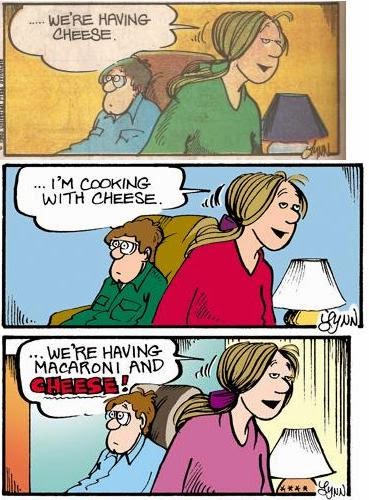 All of which is basic setup for this unasked question on what's for supper.  The prospect of having a meal consisting solely of cheese isn't that unusual, given other main courses that focus solely on a single food group.  I suppose Kraft was too much of a brand name to allow the copyright of nationally Canadian Mac & Cheese.  In short, the revised punchline fails from an effort of trying too hard.  She could've said "The Cheese stands alone", and it would've made just as much sense.  Lastly, the lamp in version three has four asterisks in front of it, either from an attempt to give itself a 4-star rating, or to cover up another malicious swear.  Take your pick.
Posted by DeBT at 1:45 PM